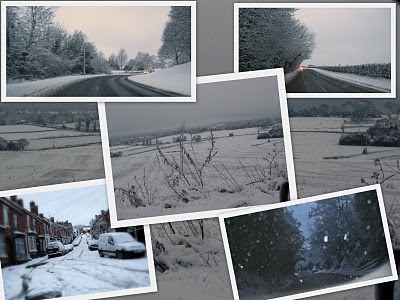 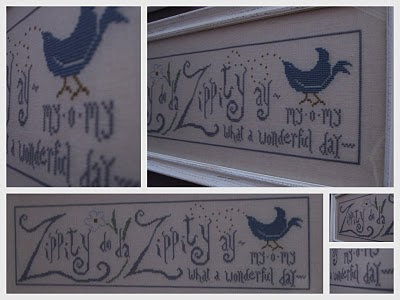 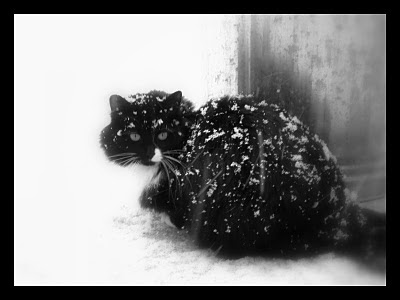 You are so talented!

We had freezing rain early yesterday morning which caused havoc on the roads. Took us over 2 and a half hours to get into town, usually a half hour journey.
That piece looks beautiful framed, a good choice of frame

Thankfully most of the snow here has gone, though it's still around in the villages. Fed up of it all now as it's keeping me inside & I want to go out! LOL
Fab finish - perfect frame for it. LOVE your new start, especially the colour - so if you decide you don't like it I'll happily take it off your hands. Eheheh :0)
Cats - minds of their own. LOL

Congrats on finishing Zippity Do Da. Looks great. I love also your new start and actually think the color you chose is lovely. Great winter pictures too - I enjoying these while sitting under the airco. :)

Maggie - what a beautiful finish, the frame is a perfect compliment to the piece. And your new start, oh my, it is lovely! Can't wait to see more of this one.

Love, the picture of Molly - she is so pretty.

Your stitched pieces are gorgeous! I love Zippity Do Da. It was one of my favorites to stitch.

Your kitty is so beautiful!

I know what you mean about not functioning in the snow. We rarely get snow (none this year), but when there is a flake watch out! Everything closes early!

Molly is a brave cat to be out there in the cold!

I don't blame you for not wanting to deal with driving in snow. Today I experienced "sliding" on an icy street for the first time. I only slid for a few feet, but it was enough to shake me up! Feeling your car move beyond your control is just unnerving to say the least!

You situation with the snow is the same as over here, as it hasn't happened for more than ten years so people aren't prepared anymore. I do hope it is over too.

Your framed piece is beautiful and love the colour of your new project.

Doesn't Molly look just beautiful out in the snow. I am enjoying all the snow we have in Holland but not the ice. It is the same here as in England. They cannot cope ... don't even bother to plow the streets in our neighborhood and the salt has run out. It is dry but cold now. The streets are getting better as we reach OC during the day now. I have enjoyed watching the ice skaters.

You and I are working on the same project, Quaker Row. Mine is falling behind as I have a very severe case of startitis. I started yet another major project yesterday...lol.

Love your framed Zippety Do Dah!

I hope your snow starts to go soon. Ours is all gone, well there is still some on the hills but as we've gone through this week it has melted away on the lower levels. I love your finished Zippity Do Dah! I also love your new start and look forward to seeing your progress. As for Molly, those paws must have been cold!

Your framed version looks great! And Molly looks so adorable in the snow ... our Fietje stays indoors as much as she can. Except when she sees a mouse of course ...

Have a nice day & greetings,
Carolien

Maggie, your Zippity Do Da is wonderful! Congrats on the framing choice--it looks great!

I loved the snowy pictures. All of ours is gone & I confess that I miss it--I love snow at this time of year--though I don't miss driving in it. I think the difference between the UK & Ireland and other countries who do get more snow is that they are used to it & prepared for it. Speaking for what we experienced here, our roads were never sanded and people have no clue how to drive in the snow or ice. I would creep along the road, knowing from experience that some parts are prone to black ice, and have an idiot zoom up behind me and ride my bumper the whole way down the hill. Where I'm from in the US, the sand trucks go out BEFORE the snow and ice comes and sand the roads, and then come through many times afterwards. I admit to scoffing at the people here panicking with the 3 inches that we got... that was until my husband had to drive 2 hours to work and I worried the whole way about the cars & road conditions he'd encounter along the way.

Zippity Do Da looks fabulous! We're so lucky that we have managed to avoid most of the snow down here in South Wales, I live at the top of a very steep hill so I dread driving to work in ice/snow. I love your new start, and the colour looks great to me!

your cat is beautiful!

This is my browsing morning..just glancing at a new blog here and there..I thoroughly enjoyed your pictures! Zippity DD is absolutely beautiful.

Zippity looks great framed! I must say I adore your new Quaker start, and I think the thread colour is gorgeous :) Molly made me laugh all covered in snowflakes :D

I love your stitched pieces, particularly your new Quaker project. What a reat colour choice. Very unusual but I do love it.
I hope that the road conditions have become better in the meantime. I know how dangerous it can be on slippery roads. Without snow ploughs we would be completely lost up here in the mountains.

Love the snowy photos! We actually got a little bit here, which is unheard of. Your new Quaker start and your framed Zippidy are beautiful - love the thread you're using on your Quaker!!

I'm waiting for those extra
pounds that you're shipping
over to me. Weigh in at
Weight Watchers last night
and I've lost another pound
in spite of the chocolate
biscuit binge of Saturday
night. I have to gain back
two pounds or so by next
Tuesday to become a lifetime
member. Thinking of going
to my Mom's and getting back
those remaining chocolate
biscuits!!

I love the framing for your
Zippity Do Da piece Maggie!!
It really looks great with
this design. This is a very
cute design, isn't it?

Quaker Row is coming along
well and looks fabulous. I
think that the thread color
that you're using gives the
design an aged look, and it
shows up nicely on the fabric
that you're stitching it on.

You know, we haven't had too
much snow here this winter
(knock on wood) and no real
big storms at all. But it does
seem like everyone else is
getting clobbered with it.
We'll see if our luck holds
through the rest of the
season.

Your Molly is such a beautiful
cat!! So lovely and furry.
And she looks adorable all
covered in snow!! Lol! At
least someone's getting some
joy out of the stuff.

I love the picture of Molly in the snow! That is a great shot! I used to have a little cairn terrier named Molly - - love the name! We haven't had much snow here although we are certainly prepared for it. It's been kind of a snowless winter for some reason when all around us have gotten dumped on.
Your Zippity Do Da is Fabulous and your quaker is looking awesome. I really like the thread color!

So cute cat! It is so funny Molly wants to catch snowflakes.