Is There Anyone Still Out There?

Wow, it's been quite a while since I've been here.

Occasionally I have scrolled through the pages and glanced at other blogs, but the urge to blog just wasn't there, so i would just go away and forget about it all over again.  But with Christmas just around the corner and another new year about to begin it seemed like a good time to catch up, if there is still anyone out there...

My last post was around June time I think, I was not in a happy place at that time and it seemed that my life might be about to take a different turn, I did write something about it at the time because I had no one I could really talk to, (I later deleted that post).
I didn't want to involve family members because they take sides and become judgemental, (one in particular would have been on the phone frequently offering words of wisdom and advice on what I should do and how I should do it!) and I just couldn't handle that, I just wanted to talk, get some things out in the open and not be judged for whatever decision I finally made.

Thankfully two fellow bloggers (who shall remain nameless, but they know who they are) gave me support when I needed it, they let me ramble on but didn't judge or criticise me, both of them helped me through those very difficult and confusing months and I shall be forever grateful for their help.

So here I am six months later and that whole business seems a long time ago and it feels sometimes like it didn't happen...other times it seems like it was yesterday and there I am full of questions again, I need to be able to believe in my own judgement, you know, take that leap of faith.  I will in time but I'm not quite there yet.

But, on the whole things are good, better than I (we) could have hoped for, the weekends are now something we both look forward to.  I suppose it's still all a bit new but I know that we are better, kinder, calmer and more considerate people for it, we have learned a very hard lesson, one that I don't think either of us will forget.

So, Christmas is just around the corner and we are looking forward to it.  All 3 girls will be staying at home this year, Stevie is home from uni at the weekend, Joanne and her boyfriend, Gavin, and Jenny and Oliver will be staying over for a couple of days too, so we will have a house full, it will be noisy and hectic and no doubt very messy, but so good :-)  There will be one person missing out on all the family fun though,, Jenny's boyfriend, Oliver's daddy, James won't be here for Christmas or new year, he will be serving in Afghanistan until April, we will of course be taking loads of photos and videos of Oliver to send to daddy so that he can a least see that his little boy had a great Christmas.

Obviously other things have taken priority over recent months and I haven't been doing much stitching at all.   There were a couple of things that I had started and wanted finished before Christmas, so when the mood took me I worked on those.
One was Oliver's Christmas Stocking and the other was Baby It's Cold Outside.  I'm so happy to have been able to at least those two  this year. 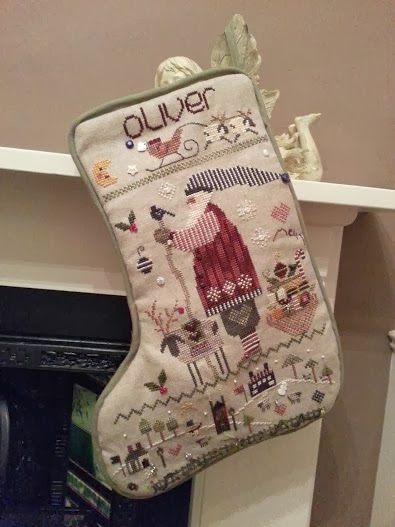 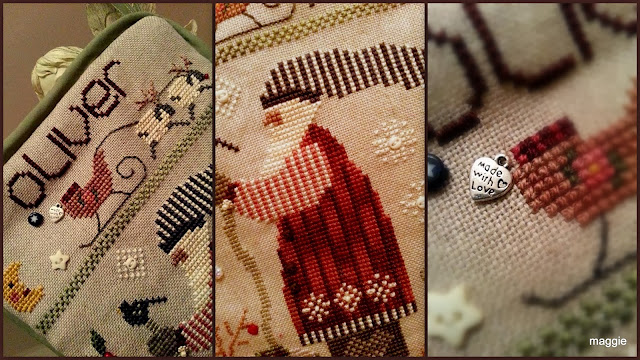 I managed to stitch the stocking in secret and surprise Jenny when it was completed at the beginning of December.
I think It's fair to say that she was over the moon with It.
It will be a while before Oliver appreciates all the love that his Nanna put into making this for him, but hopefully it will one day become a talking piece when It gets its annual outing.

This is Baby It's Cold, I really enjoyed stitching this one. 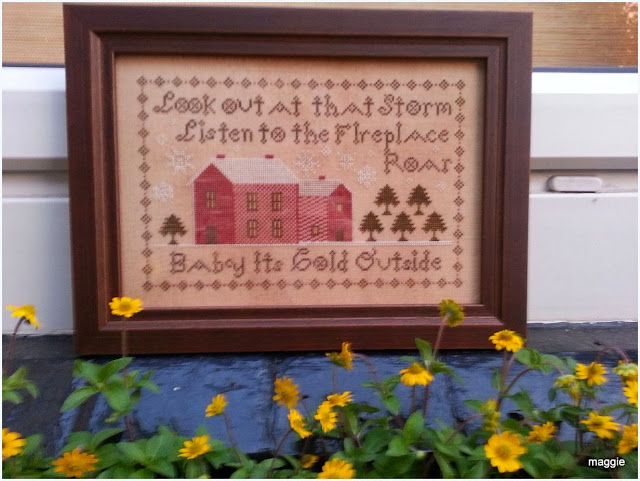 Apologies for the blurry photo on this one, it's the only one I could find and it was from my phone.

I'll try not to leave it too long between visits in future.

Have a great Christmas and enjoy having your family around you
plenty of time for stitching in 2014 you just need something new and interesting to inspire you.

Good to see you back. I wish you a very happy Christmas

Lovely to see a post from you. I have been absent since June too but it's nice to catch up with everyone. Sounds like you have been through a tough time. I have too for the last few years and it seems never ending. Lovely stitching. xx

ooooo helloooo .. glad things are working out better for you both (((HUGS))))
gorgeous stocking for the wee one and yes plenty of photos required too ....
hope you have a wonderful time with the family there :) love mouse xxxxx

Nice to have a blogger back. They(blogs) do take time and effort! Sometimes life does get in the way. I LOVE that stocking. It will be something to treasure. Baby It's cold Outside looks wonderful in the frame!

Lovely to see a post from you Maggie and glad that things are working out for you both. Have a fantastic Christmas with your family.

It is so nice to see you blogging, Maggie, and I am happy that things are better for you. Love your new finishes. I wish you and yours a wonderful holiday season!

So nice to see an update from you!
Lovely stitches.
Merry Christmas!

It is really funny because last week I was having a blog clear out for people who had stopped blogging and for some reason I let yours stay. I am so glad I did. Life sucks sometimes; all we can do is live it and do our best. Learn from our mistakes (not that I make any...ever lol) and dust ourselves off and start again.

We don't need details: we are there to support each other as only crafting bloggers can. So I will simply wish you and yours a lovely Christmas and a much better 2014.

Welcome back Maggie! Sometime we just need a hiatus from it all. There are much more important things in life :)

I'm sorry to hear about your troubles and I truly hope they've all but resolved themselves by now. I suppose I can relate a little as I went through my own dark spell early last spring.

While you may not have stitched much what did stitch is beautiful! Looking forward to many more :)

So glad to hear that you are okay dear Maggie. Sometimes things happen that really shake a person up and make one think about which path to take. Such a lovely stocking for Oliver and I know he will appreciate his Nanna's handiwork and love that you put into making it for him. Baby It's Cold looks great in that frame and perfect to put up for Christmas. Take care Maggie! Hugs!

Glad to see you back, Maggie, and glad that things are looking better now. 2013 has been a tough year for a lot of people, including myself, so we are all hoping that things will improve significantly next year!

Love Oliver's stocking - absolutely gorgeous! I like the framed piece too and Beth's designs in general.

Have a lovely Christmas with your family!

So sorry you've not had a good time. I'd actually just gone through and looked at your blog the other day. You're 2 finishes are wonderful!

Glad things are back on track.

So glad to hear from you again. Your stitching is just beautiful, I am sure the stocking will be treasured. Happy Christmas.

Hi Maggie! Love the ornie in your header photo. What designer is it?
And you have been doing some great holiday stitching. The stocking will become an heirloom.

Wishing you a very Merry Christmas!

Oh my, this stocking is stunning. I love it.

I'm happy, you're back...
The stocking is so lovely.
Joyeux Noël my Dear Maggie.
Bisxxx

So glad to see a post from you! Sounds like you will be busy with your house full of love and laughter over the holidays ~ enjoy it all! Beautiful stocking finish and love the frame you chose for Baby It's Cold Outside!

It really is great to see a post from you. I'm glad to hear you are doing better all around. Both finishes are wonderful. Have a great holiday. :)

Glad you have felt inspired enough to rejoin blogging! The stocking is very very nice! And your finish of Baby It's Cold Outside reminds me that I also have this piece, languishing in my stash--I should get it out! Have a Merry Christmas!

So glad to see you back! I hope you have a wonderful Christmas. I love your finishes!

Hello Maggie, good to see you are back with us .
You were so missed , I am a little late reading all the blogs after such a busy month. Your stocking looks fantastic. Love your header and the Christmas stitch too, good to have you back hugs.