Wow, December already! Where has this year gone?  The months have whizzed by so fast this year, Is it only me that finds it hard to keep up with everything? or do you feel the same?  I need more hours in the day, more day's in the week and more weeks in the year, lol.

At least I had a break from work this past week, well, all told, including weekends I had 8 days, it was lovely, no early mornings, no alarm calling me to get up, bliss.  I'm really not a morning person, I prefer to come around slowly, a couple cups of tea and then I might be sociable, until then I prefer to be quiet.  So when my co-worker asked if i would swap and work her afternoon today of course I said Yes! Yayyy, one more lie-in, lol.

I really needed this past week to re-charge my batteries but we still have 2 more bedrooms to get ready before Christmas, so it didn't look as though there would be much rest!

First though a little bit of R&R was called for, so our soon-to-be son in law was left in charge of hanging wallpaper in the spare room while I swanned off to Ayr in Scotland to spend a long weekend with DH.  I caught the train on the Friday morning, it was 2 trains and about 5 1/2 hours, so plenty of time to work on my blanket both getting to and travelling back home. 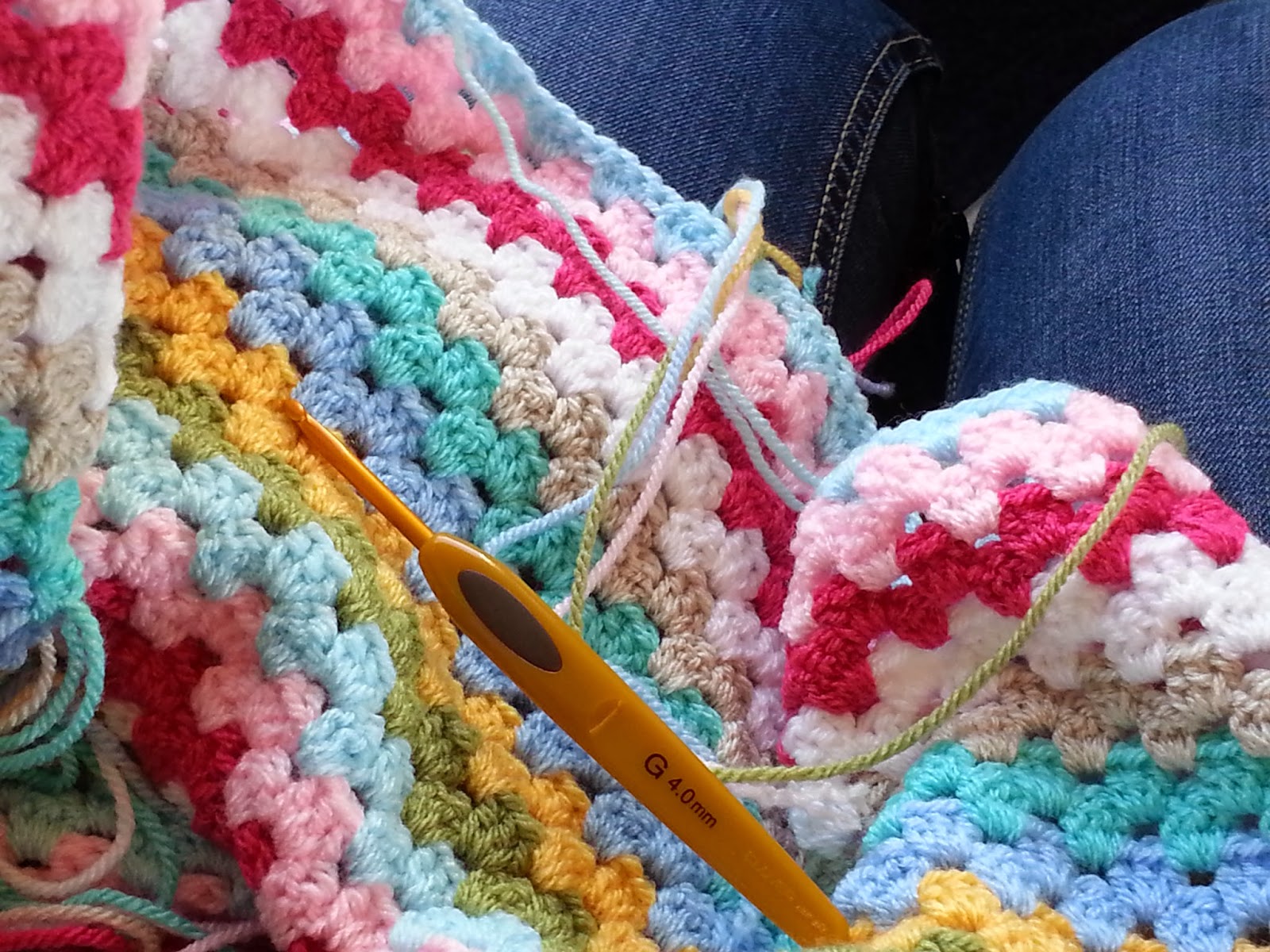 I can't remember the last time I sat for so long, it made a pleasant change to just crochet and not to have interruptions.

On the Saturday we had a leisurely  browse around the town and I managed to get another couple of Christmas presents then we had some lunch in a pub that was in an old church, the alter was even still there, it felt very strange!, I should have remembered to take photos.  On the Sunday we decided to go to Robert Burns house and museum as it wasn't too far.brig

The house where Robbie Burns was born

Entrance to the Robbie Burns Monument

Brig O'Doon was just over the road from the monument Such a lovely bridge, now just a foot bridge still with the original cobbles 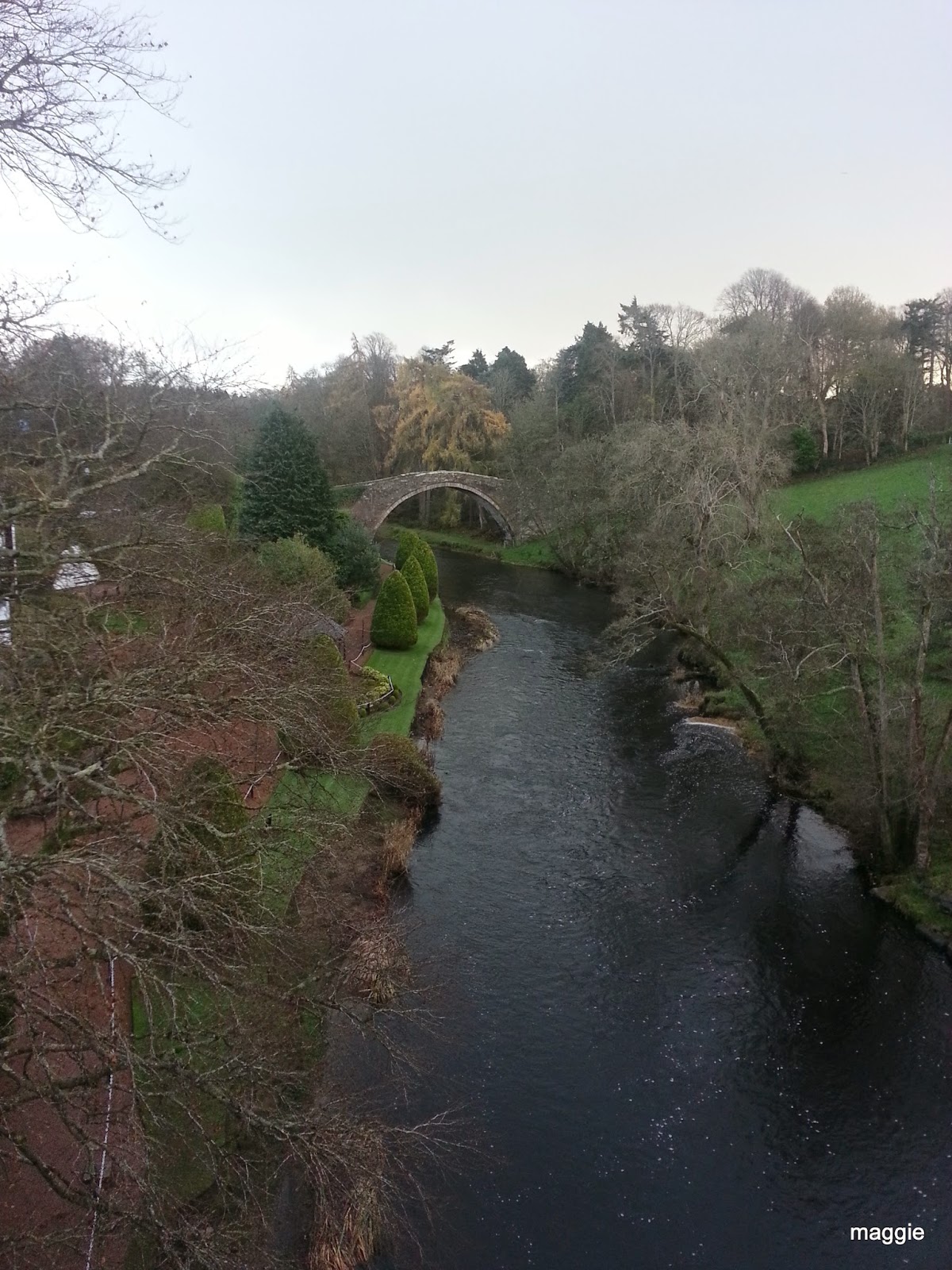 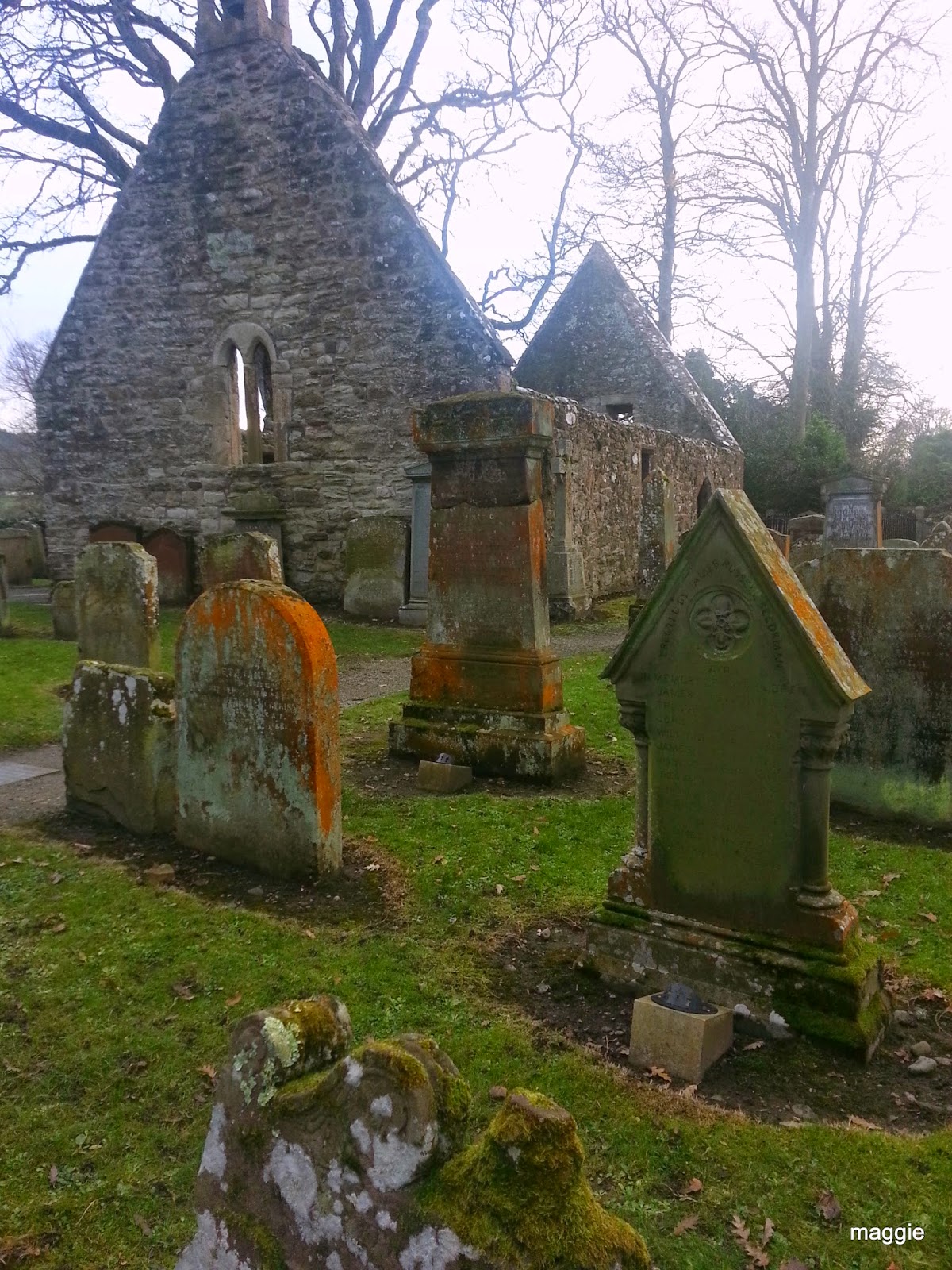 Monday came around all too quickly, but it was nice to get away for a few days, can you believe this was my first ever visit to Scotland?  I would love to go again sometime, the people were extremely friendly everywhere we went and the scenery was amazing.
I took these from the train window on the way back so they are not the best, but you can get the idea. 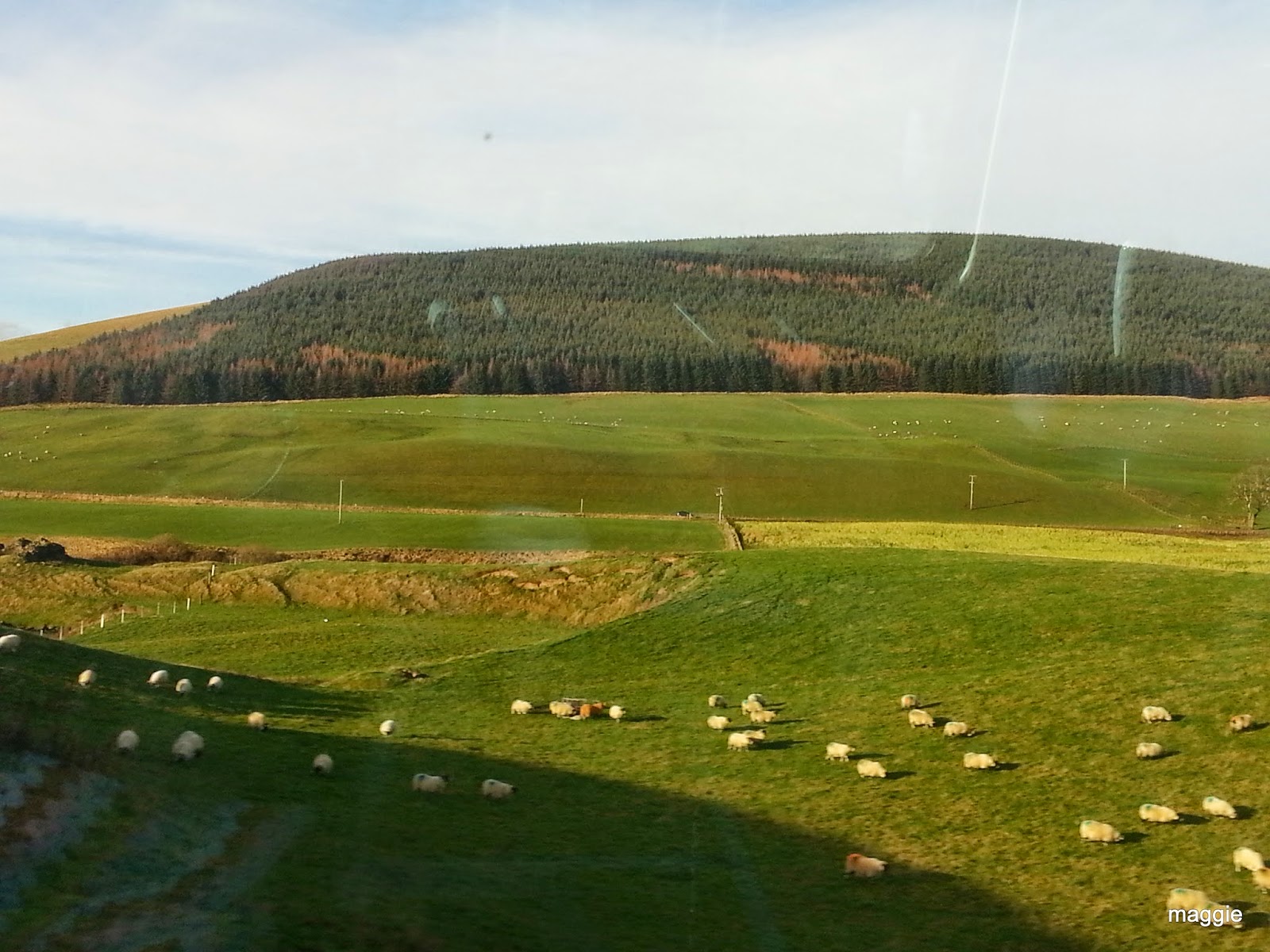 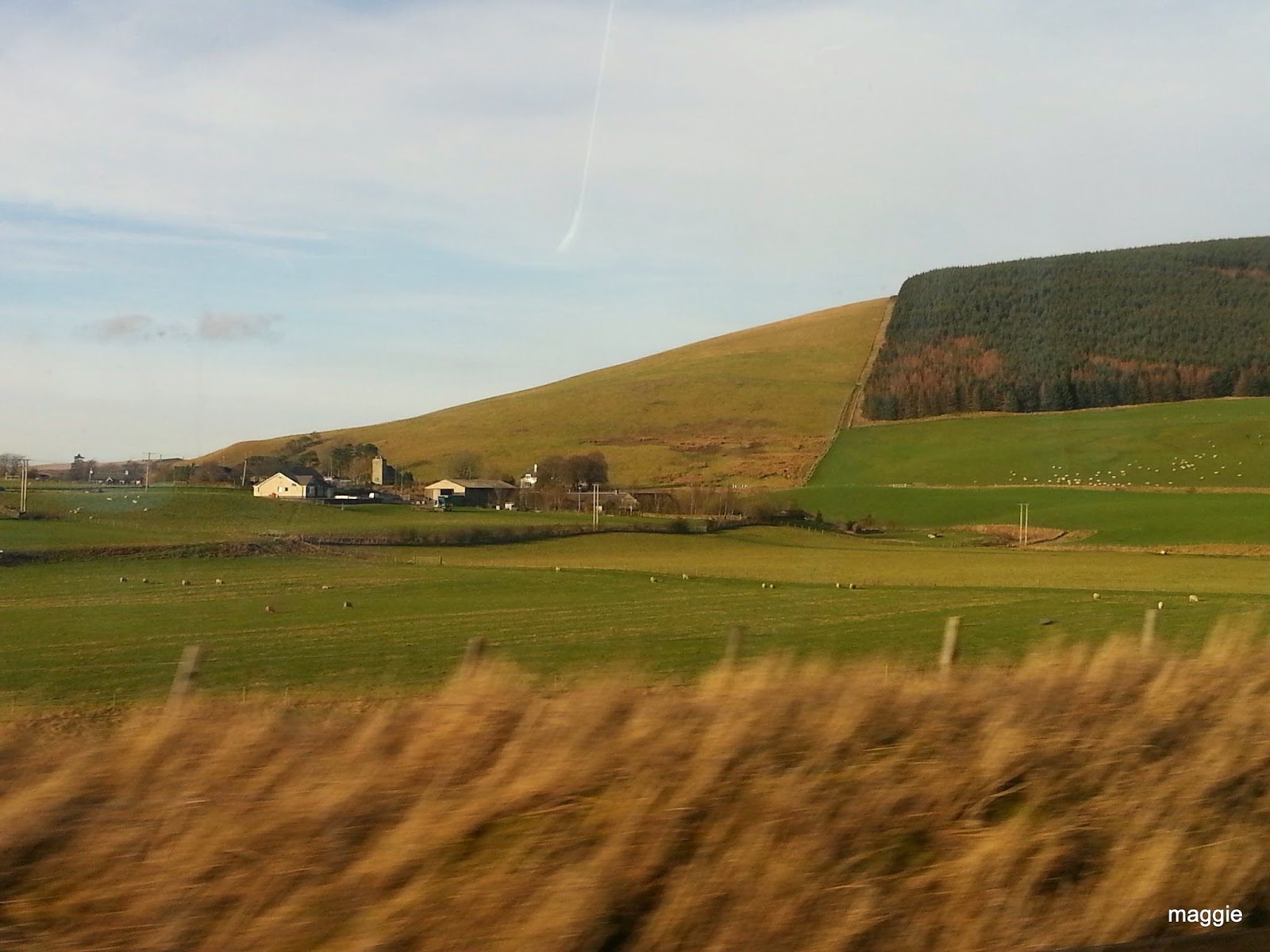 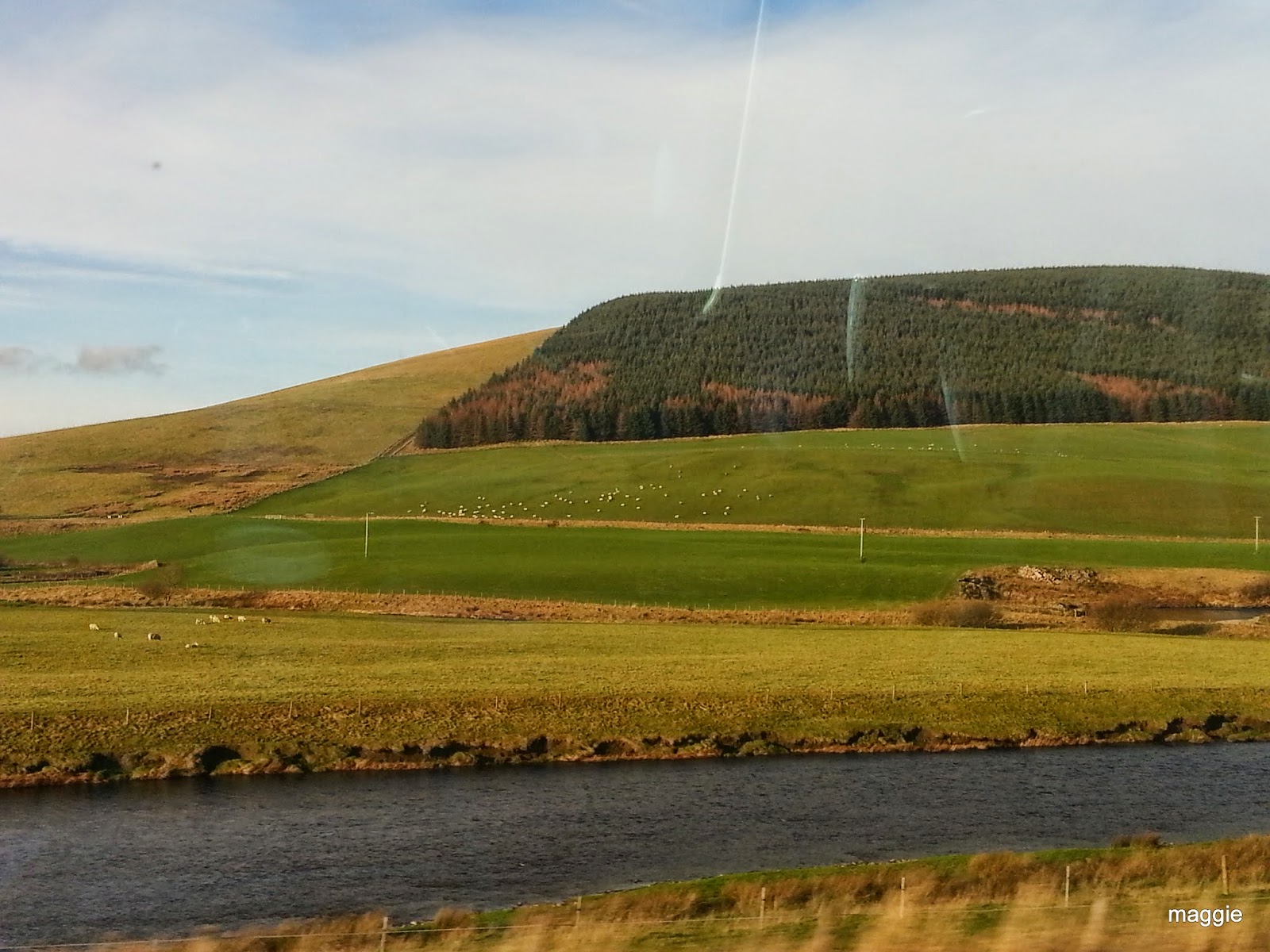 Except for one shopping outing to Worcester, (where DD#3 did a bit of damage to my bank card), most of the rest of my week off was either spent painting, or collecting pretty things from Ikea and Dunelm, at least the end is in sight for the finish of another bedroom, we're getting there, slowly. How I wish we could wave a magic wand and it would be all done, either that or win the lottery and go away somewhere while someone else did all the work, lol.

Apologies if this post is a bit disjointed, I've been trying to publish it since yesterday but my internet connection was playing up, hopefully it will publish now.
Until next time
-X-
See you soon...... Maggie

How I envy you your trip to Scotland but thank you for your generosity in sharing photographs. All the best for the rest of your interior decorating.

Ah, bonnie Scotland... God's own country! Isn't it beautiful - so green and pretty. I know Ayrshire well as I've got family there :-)
Your decorating sounds good too - don't you just love wandering around Dunelm & Ikea? Good luck with the rest, hope you get it all finished soon. Ooh, and your crochet looks lovely too! xx

What beautiful pictures.....but, sadly you've got me feeling homesick! Glad you had a good time. LOVE your crocheting, the colours are wonderful.

I so enjoyed your photos from Scotland, Maggie--just incredible!

Lovely crocheting, too--sounds as if you are truly enjoying relaxing with it :)

Thank you sooo much fot these lovely photos... your country must be very nice...

Beautiful sceneries, thanks for sharing the pics.
Upstair's almost done here and can things be returned but oh my i am not in the mood at all...feeling too tired.

Looks like a super trip.
Brigadoon is my all time favourite musical, I love it!
Blankets looking amazing.

Maggie - I don't go blogging much anymore, was just on to do a bit of housework, but I noticed you'd posted, so I visited. I am so glad for you that things are going much better. You've been on my mind off and on for the last year or so. One thing I remember about you - and it still remains true - your beautiful photography. Thanks for the tour of Scotland, they were lovely photos. Merry Christmas - Katherine

What a great trip. Just the train ride alone looks inspiring. It's beautiful. :)

Your trip to Scotland looked great.

Oh the pics are great I would love to one day to visit Scotland. A girl can dream but for now... I just enjoy ur pics so much! Thank you for posting!

Those pictures are awesome, as is your blanket.