A Bit of This & That (and Stitch from Stash)

Well February turned out NOT to be the month for stitching!
I had great plans and they all came to nothing, that'll teach me, lol
At least my Stitch from Stash report is on time, (just).

As before I haven't 'earned' anything from my stitching because I'm still working on my PS Redwork Santa's and the chart and threads were only purchased in December so don't count.
Actually, I have a question about the earning part, (and I hope you don't find it a silly question), if you're taking part in sfs are you paying yourself in actual money, i.e.. squirrelling it away in a little pot, or, are you just counting it as virtual money, and keeping a tally? Just curious nosey, lol.

So just the one stitching finish to show for February, I still have one more PS Santa to stitch, but I won't jinx myself by promising to have them all finished by the end of March :-) 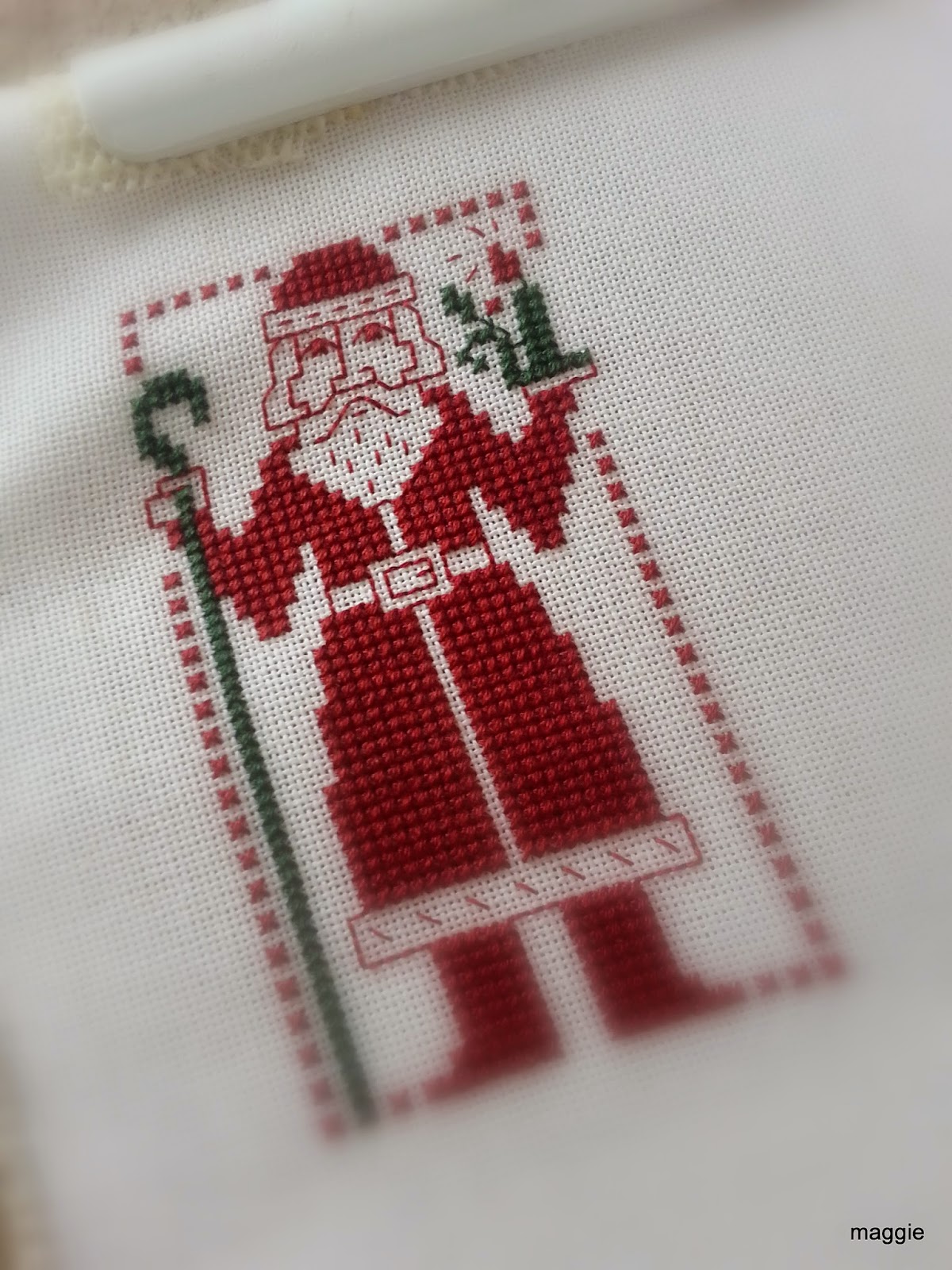 I mentioned before that a co-worker was pregnant and had asked me to knit a blanket for her, well she had her gender scan and it's a boy!
She asked for the same cable pattern blanket I'd knit for my grandson.
I made a start at the weekend, it's chunky yarn so is knitting up quite quickly.

She left the colour choice to me, just specifying that she wanted blue, I hope she likes what I chose, it's not a true blue but I thought it was a bit more modern looking. 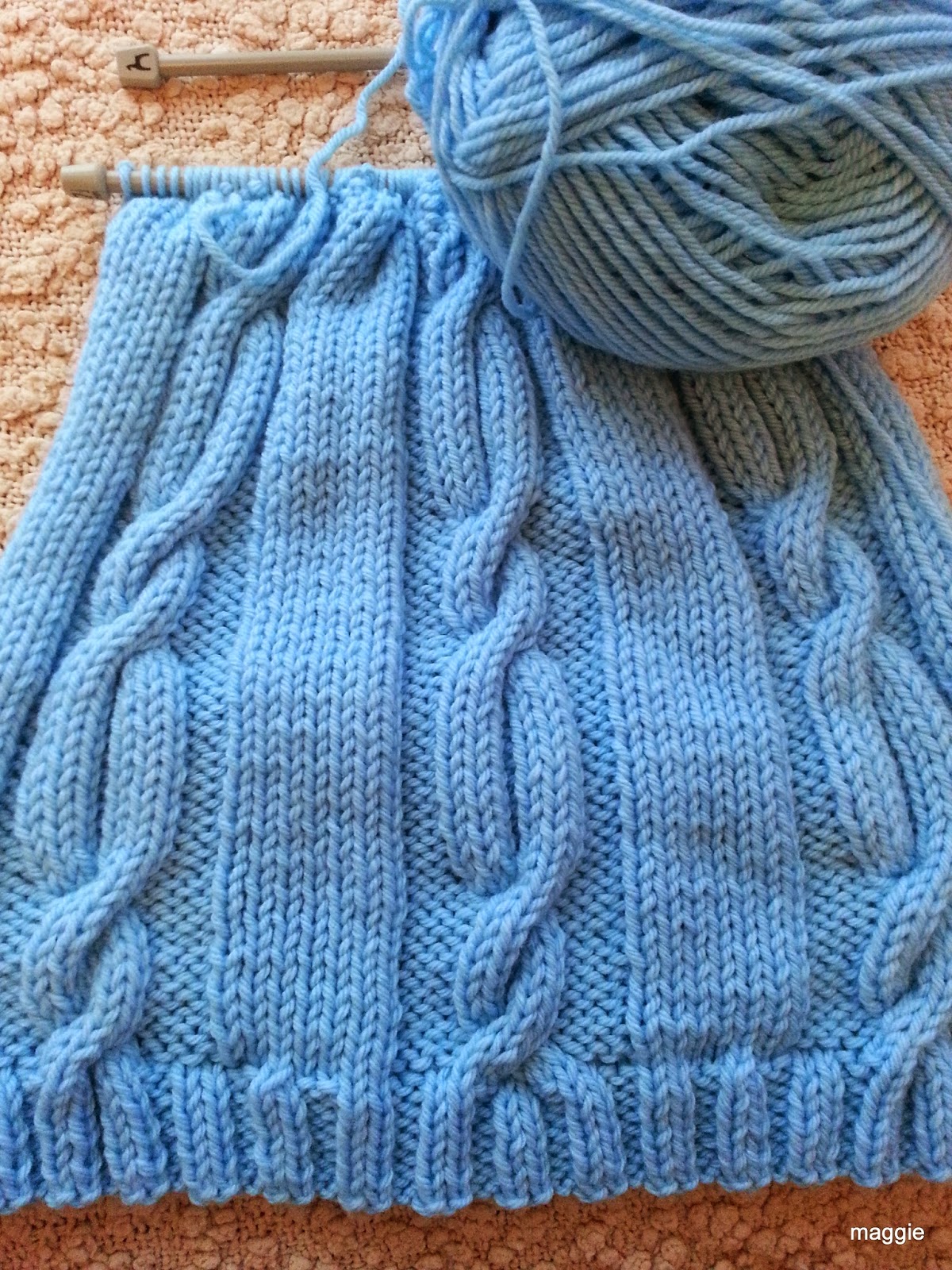 We are edging ever closer to DD#2  (Joanne's) wedding, but more importantly at the moment is the hen 'do'.
We arranged a meal at a local Greek restaurant, as she is getting married in Cyprus this seemed appropriate, nice civilised meal and night club afterwards for those people wanted to go, we also suggested a weekend in London with afternoon tea and perhaps a show.
We thought that the two suggestions would leave no one out, right?
Wrong!!
We have had people making all sorts of excuses.  I understand (and so do Joanne & Gavin) that a lot of people wouldn't make the trip to Cyprus to see them married, we expected that, but we tried to arrange the hen party so that everyone would be included.  So when my older sister turned round and just said she wouldn't be coming to either the Greek restaurant or the London trip I was non too happy, in fact I was extremely angry, her excuse?? she doesn't like Greek food, (she has never been to Greece or tried Greek food) and she doesn't like the London underground, she has never been to London!!!  I can't bring myself to even phone her at the moment because I feel I will have to say something and I really don't want to cause ill feeling.
Anyway, deep breath.
Apparently hen party guest have to be given a party bag, really? did you know that? It was news to me, lol.  So we have been in search of  some appropriately tacky, goody bag items , (which I won't subject you to, lol) but as a little keepsake I decided to make a crochet flower brooch. 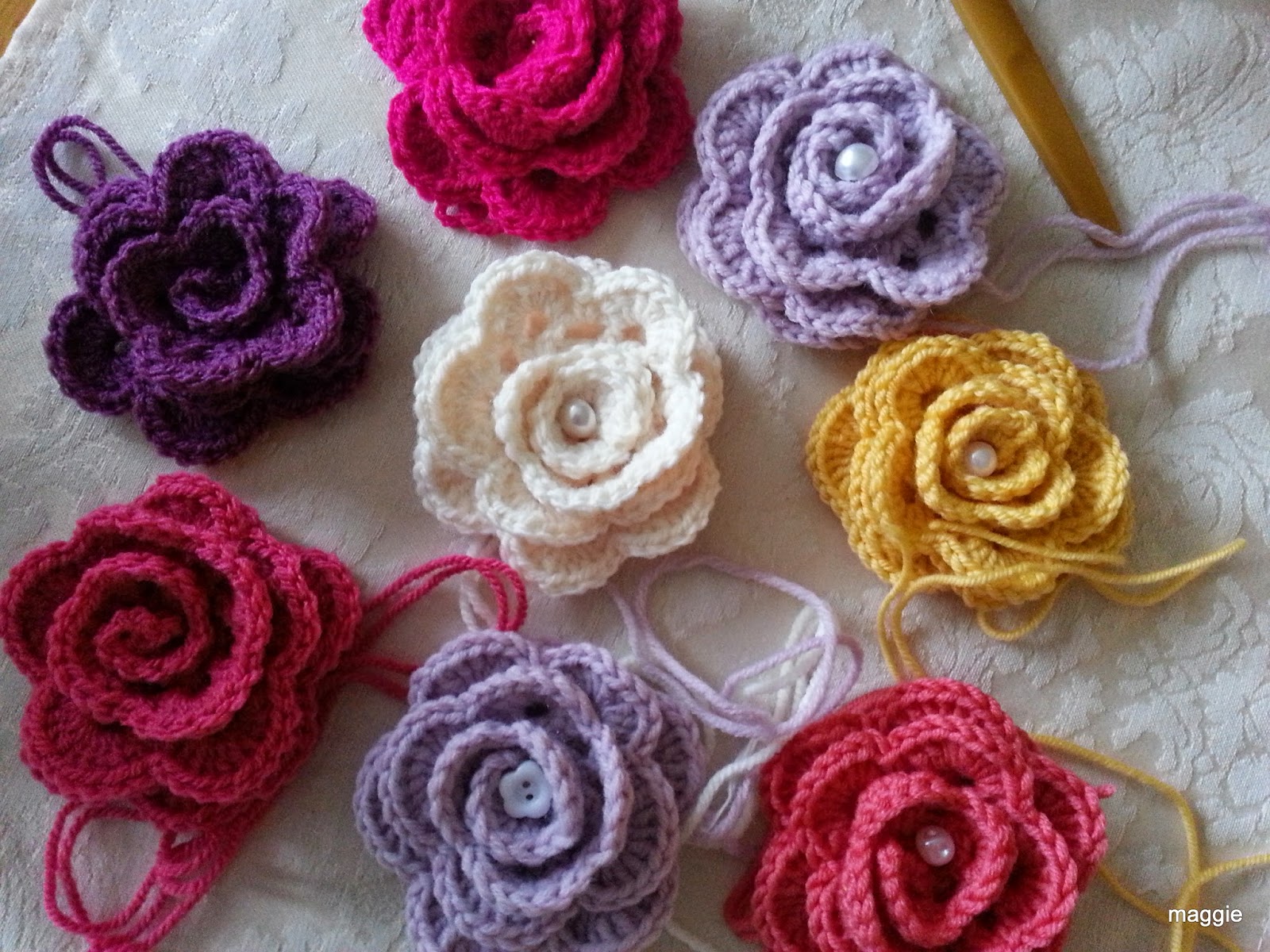 These are my first attempts, not sewn up yet but what do you think?
I must confess I really like them :-)
I have to make about 20 but will probably make more and choose the best ones.

Unfortunately I cannot take credit for the pattern, it's a free one I found on line, I will share the link next time, I printed it off to refer to and can't put my hand on it just now.

Hopefully it will be a more stitching related post next time, I really want to get those Sants's finished :-)

You've been busy! I really like that Redwork Santa!

Your knitting is beautiful. My niece summed it up perfectly "families are complicated because they have people in them." Don't allow your joy to be spoiled

Weddings are a bloody nightmare as far as relatives are concerned.....ask me how I know...LOL

Apparently your sister hasn't learned that it's not all about her. You know what? You can't please all the people all the time. So, do what you planned and enjoy it. It's her loss.

Love the color you chose for the baby blanket. You are right. A nice modern color for a modern baby boy.

Really like the blue you have chosen for the baby blanket. The crochet brooches are lovely.

The red Santa looks great and the blanket will be just perfect. Too bad about your sister-it's her loss. She will miss much family fun!!

Love the redwork santa, i keep seeing PS santas recently in blogland. The simplicity of the redwork is lovely, I might have to get me that pattern.

The blue baby blanket is lovely, chunky wool will make it nice and cosy, she'll love it and so will the new baby.

Crochet flower brooches are fabulous. Lucky ladies who will be coming along to the 'hen do' what a shame those who wont be there will not be getting a beautiful handmade keepsake of Jo's special time.

I do love the color of blue you are using in the sweater and the PS Santa is fabulous :) Your crocheted brooches will be such a treat for the women who attend... So sorry your sister has decided not to come!

Maggie I love your Santa - I haven't done any PS Santas but I can tell they will be in my future. :) I've read several other bloggers talking about Stitching From Stash but I missed out on the explanation for this - when did it start and how do you set your "budget"? Daughters - they will certainly try you sometimes! blessings, marlene

I love the little flowers. They're darling. :)
Is there ever a drama-free wedding (or funeral)? Sadly. Certain things just seem to bring out the worst in people. :(

All I can say is that it's your sister's loss.

And as for the SFS £ I'm putting actual cash away, it'll be spending money at a couple of air shows I'm going to later in the year

Hi Maggie
I just came across your blog this morning, and your cross stitching is beautiful! Your SFS is such a good idea, I am trying to buy little this year too although a friend and I are going to the Sewing and Knitting show at the NEC today, I've never been before but I aim to not be extravagant with purchases. Have a good weekend
Caz xx

How beautiful blanket for that little prince! And those roses are beautiful! I hope J has an awesome "I do!" - day.