One Saturday in Edinburgh

I had to bid a fond farewell to my old laptop, it served me well for probably 8 years or more, nothing could be done to save it, but at least the I.T guy managed to get all my files and photos off the hard drive.  It's going to be a task to go through everything and see what i really do want to keep though, something i will have to do a bit at a time.

It seems ages since I was here but I thought i'd pick up where I left off, which was when I was just before I set off to Berwick again.

We have had some really lovely weather the last few weeks and when I set off for my visit to Mark we had been having temperatures of 22 - 24 degrees most days.  I got a shock when he picked me up at the station on the Friday evening, it was only 12 degrees!!

The following day Mark dropped me at the train station just before 8.30 for my train to Edinburgh, it was like a bleak Winter morning, really cold and misty.

Berwick Upon Tweed station.
(If you are wondering,this is how you pronounce Berwick)
I know some of  our place names can be a little strange and not pronounced how you might think,
the universal English language can be confusing. 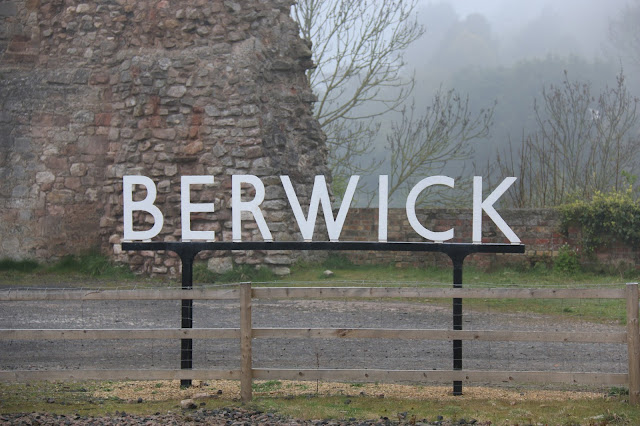 Anyway, 40 minutes later i was in Edinburgh, where it was clearer but colder still.
Honestly, i couldn't have chosen a colder day if i had gone mid Winter.
My daughter text me to say it was a lovely 24 degrees at home, and there i was considering buying an extra jumper and a pair of gloves, lol

I decided to buy a tour bus ticket, one of those you can hop on and off all day, Edinburgh is very hilly so it gave me chance to rest when I'd had enough of walking.

I didn't have time to visit all the places I would have liked, and chose to visit Holyrood House rather than the Castle.  Unfortunately you're not allowed to take photographs inside the Palace.  Twice a year the Queen still stays there, it's shut at those times, but when it's open for visitors some of the rooms on the tour are actually used by the Queen.  It's quite strange walking round and thinking that Her Majesty has walked where you are walking. and sat at that dining table :-)

Holyrood is also where Mary Queen of Scotts lived and you can see her rooms in the Palace, and very cold they are too, imagine what they would have been like back then in the middle of Winter!

The Abbey ruins and the gardens are well worth a walk around too. 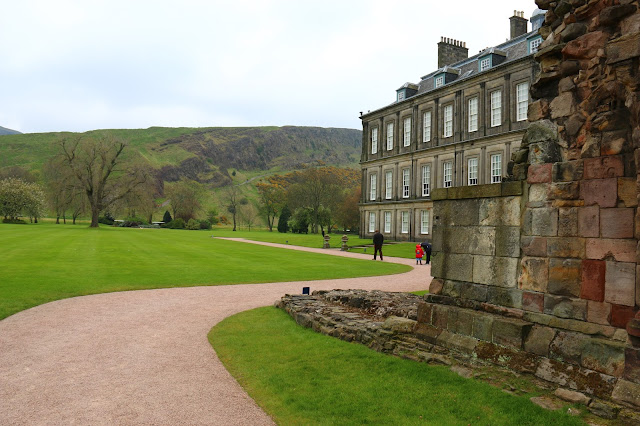 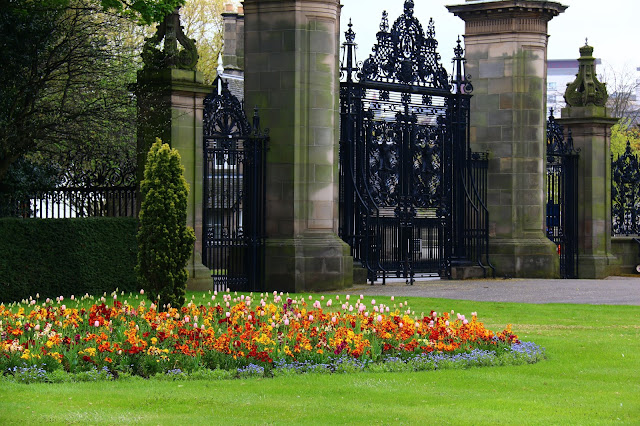 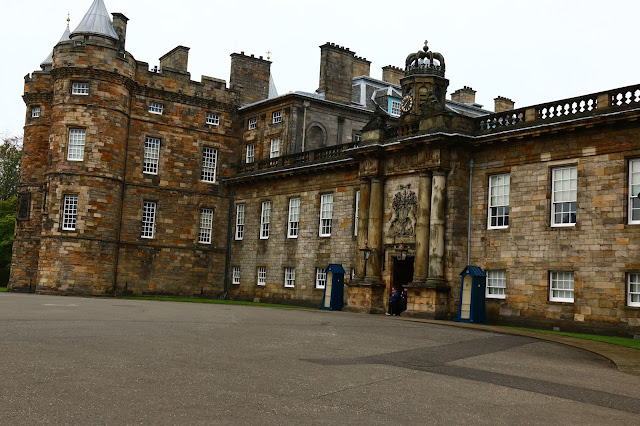 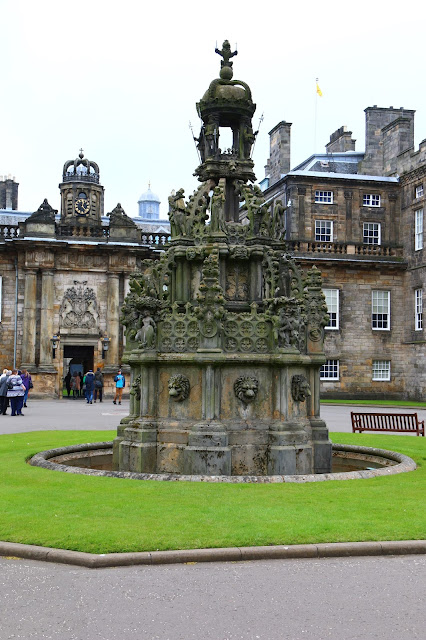 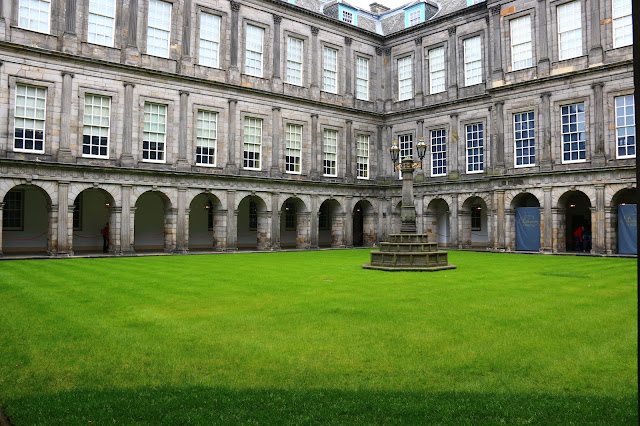 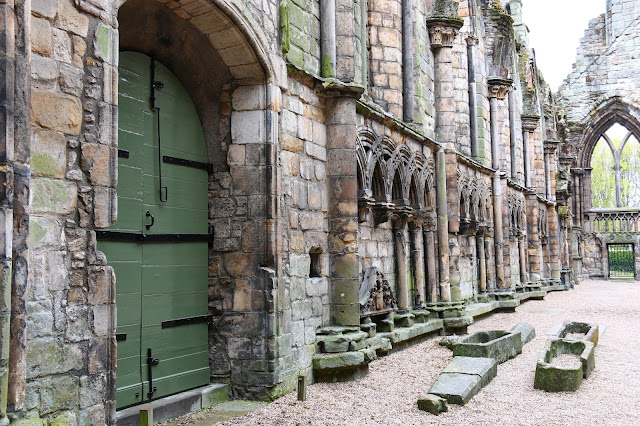 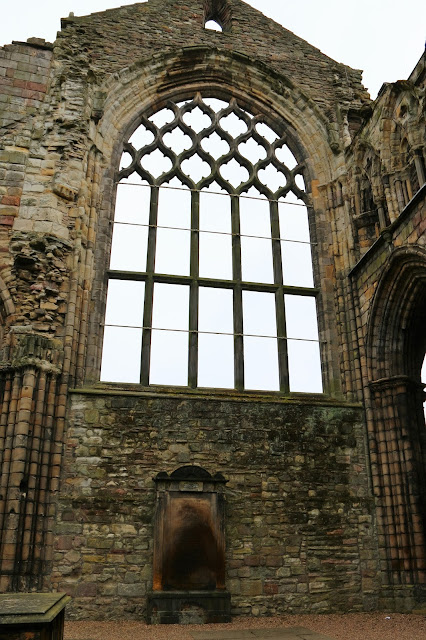 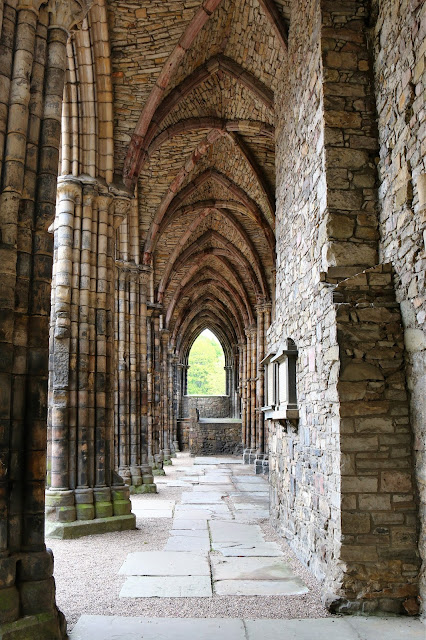 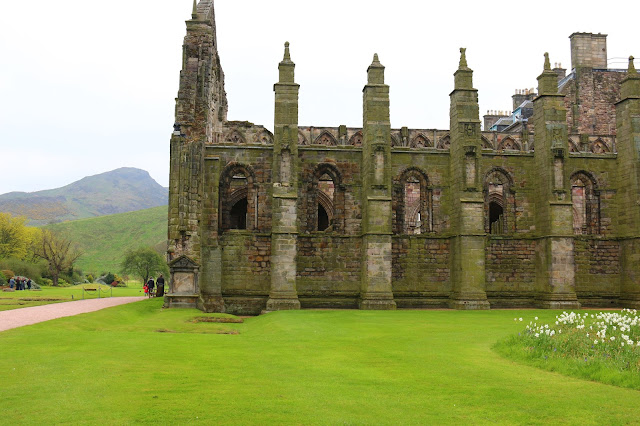 Edinburgh is also home to the largest monument to a writer.
Normally you would be able to climb to the top of the Walter Scott monument but at this time is was closed for refurbishment, which was probably just as well because i wouldn't have been able to resist the challenge of climbing the 287 steps just to say I'd done it, but my legs and feet would not have thanked me, lol 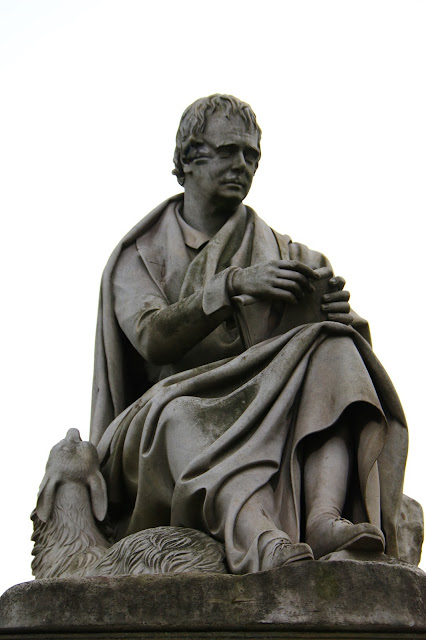 The Walter Scott Monument built in 1884 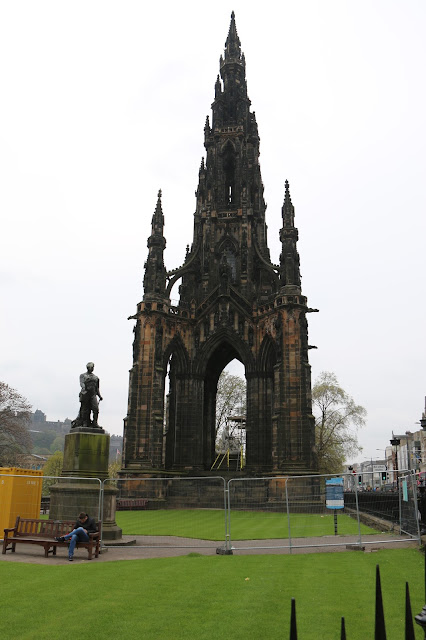 There are plenty of shops selling tartan paraphernalia and shortbread biscuits in various shapes and in every conceivable shaped tin, of course, there would be, and why not, but there is also a lot of history attached to the City, and that's what I'm more interested in, which was why the tour bus is a good idea, the guides are very informative and you get little snippets about the City that you would probably miss otherwise.

I managed to fit in a mini yarn crawl while I was there.  Ginger Twist is a cute little shop about 10-15 minute walk from Hollyrood House and where I purchased some goodies 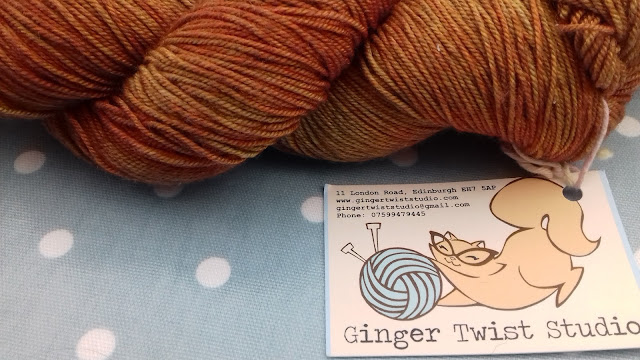 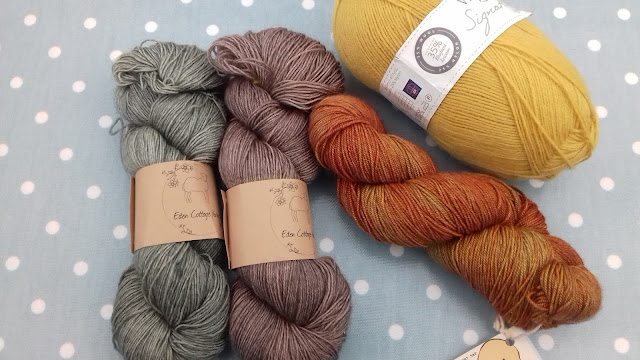 And later in the afternoon I managed to find Kathy's Knits, another lovely place and another purchase

This is the first time i've ever bought any hand dyed yarn, and i'm loving the colours and have been spending quite a bit of time on Ravelry looking for something to knit.

My train back to Berwick was at 5.30,  I'd walked almost none stop all day, only stopping for breakfast and a cuppa late morning and another coffee stop while waiting for my train, needless to say, I was shattered. 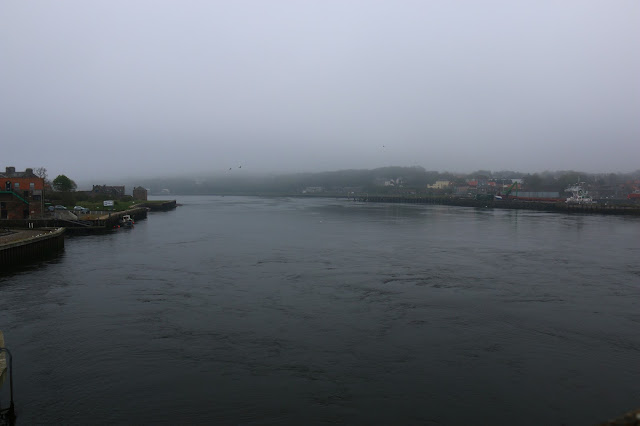 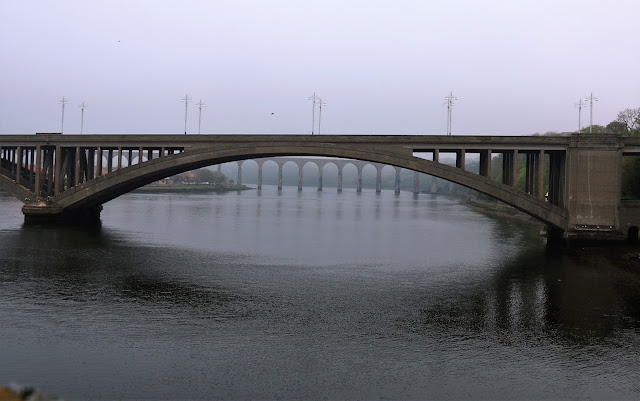 I was heading home and another long train journey the next afternoon, so although it was lovely to get away, see Mark and do some sight seeing it was a tiring weekend, plus I had Oliver 3 times as well as work last week so I feel like i'm playing catch-up with everything this week.

Hopefully I will get around to some blog reading and commenting at the weekend now I've got my new super duper computer :-)

Berwick looks like a wonderful place to visit, even with the sort of dreary weather. The castle, the monument, the grounds; all spectacular. The yarn is lovely. I especially like the ginger colored yarn and can't wait to see what you make with it!
Glad you were able to save all your files and photos from the old computer, that's always a bit of a worry!

I really enjoyed your post . If we ever get to Europe, my DH and I will go to Scotland. I have a lot of family history there.

Glad you're back online again, it feels like my arm's been cut off if I'm without the internet for any period of time. My friend has recently come back from a few days in Northumberland, she was staying in Bamburgh and said that her first day there was so different to the weather we were having here. Luckily for her, it bucked up the rest of the time she was there. We'd planned to take a trip to Edinburgh whilst we were staying in Northumberland last year but we never made it, in fact, we did cross the border on a few occasions and that was my first time in Scotland. We didn't venture very far up though. Looking forward to seeing what you make with that scrummy yarn.

Thank you for sharing these wonderful pictures.

Looks like a fab weekend,love the ginger wool,my kind of colour x

Thanks for the trip to Edinburgh, Maggie! I missed Holyrood House on my visit almost 20 years ago.

I love seeing places like this! Especially when their history is way past where our country even starts! Very enjoyable! Thanks for sharing!

Great pictures from your trip to Edinburgh. That's a place where I'd love to travel some day, too.

Oh my goodness!! Your pictures of Edinburgh had me sighing and wistful as I
browsed through them very slowly so as not to miss a thing. What a wonderful
day you had ... though an exhausting one. Holyrood House must have been a
most fascinating of tours. I love those incredible, grand houses which are chock
full of history with a human touch. And to be somewhere where the Queen has
lived ... mind-blowing! The tour bus was a great idea too, allowing you to cover
a lot of ground without taking too much out of you. A full and busy weekend
for you ... after a full and busy week previously it seems. Well, I'm sure you
slept well afterwords. Thanks for sharing the pictures and story of your
adventures. Oh, and love the colours of the wool that you purchased during
your travels. You can perhaps knit up something that'll keep you warm for
your next trip up north. Cheers!

Welcome back and...thank you for this travel in Berwick! :-))
Miriam

Glad you had a nice time in Berwick and Edinburgh. I love visiting Edinburgh and of the main sites, Holyrood House is the one I haven't been to ... yet.