Of course I believe in fairies, don't you?

A few weeks ago I decorated a couple of fairy doors to put in the garden, I only just got round to putting a coat of varnish on them so I can now put them out.

I didn't realise until I put it on that the varnish was gloss, satin would have been much better, but they're done now so there is not much I can do about that. 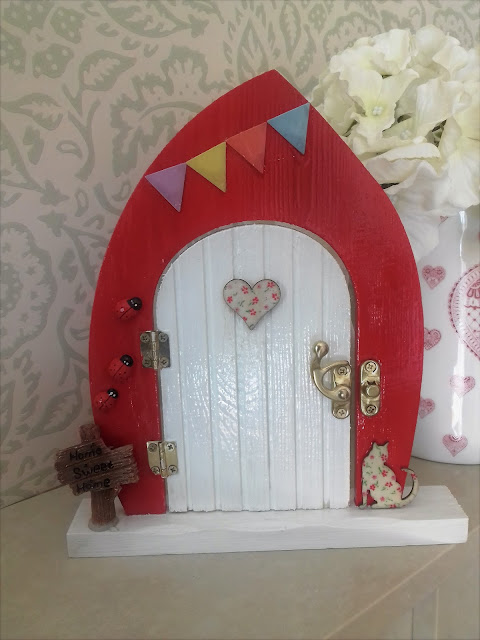 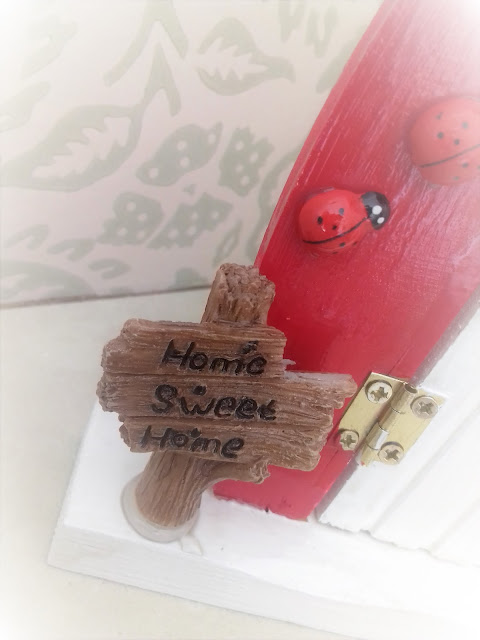 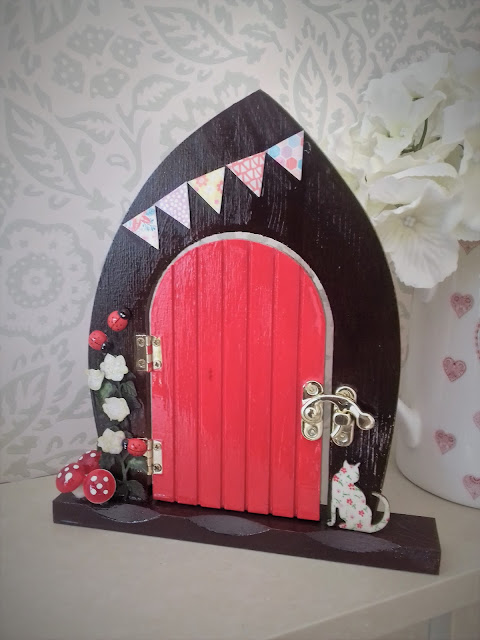 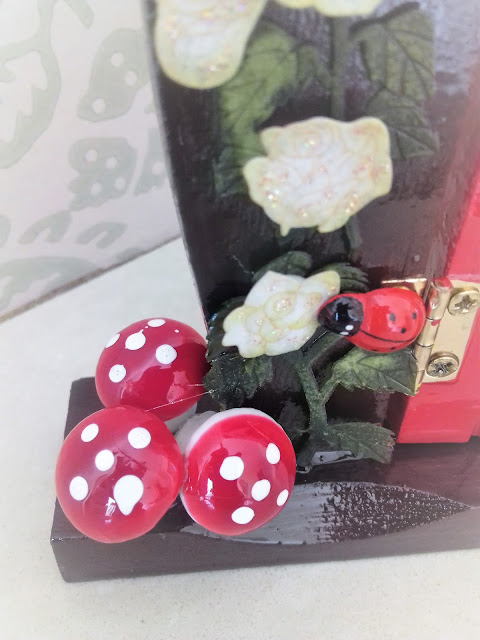 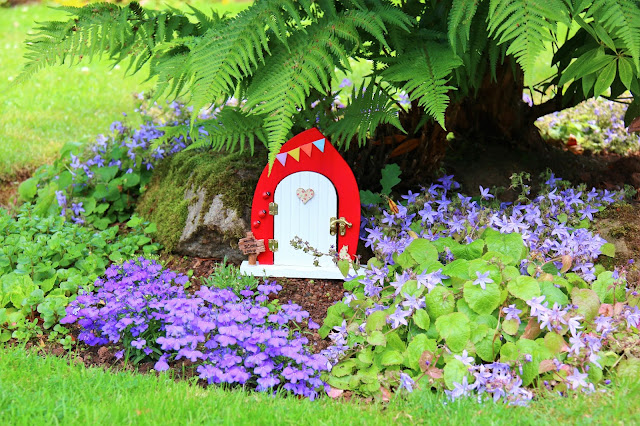 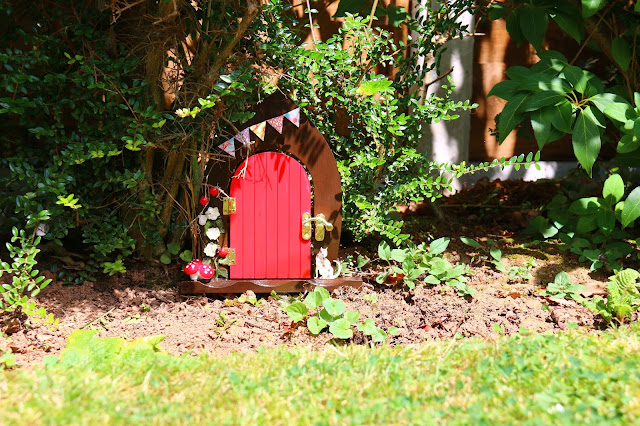 There has been much eye rolling by Mark, but I think they look rather cute :-)

(forgot to mention, I bought the un-decorated fairy door from The Works for £2)
~~~~~~~~~~
It's not been a great week for me as while I was doing some garden work on Monday something bit me, again.  Seriously, I just shouldn't be let outside!

It was quite a bad one, on my right ankle this time and my foot and ankle was quite swollen and It was really painful, I could only walk on tip toes for two days.
I ended up going to the doctors and getting more antibiotics and today the redness although not gone completely is better.  It went into a blister and that is still quite sore. as it hasn't healed over yet.

I think it's wellington boots for me from now on when i'm doing anything outside!

Hopefully the coming week will be better

As I was feeling sorry for myself, I bought a lovely bunch of Peony's to cheer me up,
aren't they pretty?  And a bargain too, £3 from Aldi, I haven't seen them in Aldi before and there were only 2 bunches left, so they must have been popular. 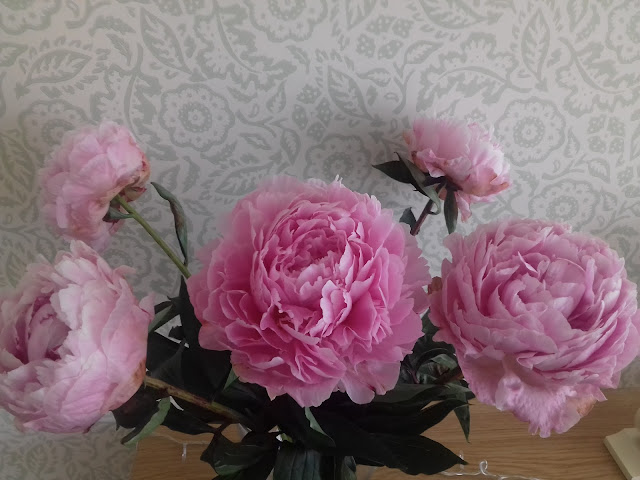 They have opened up a bit more today, such a pretty flower 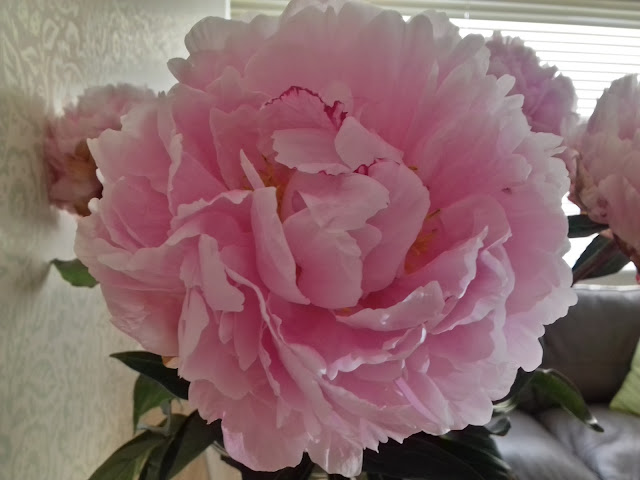 I have a very quiet week planned, Mark is working away and Stevie is on holiday, mmmmm, what will I do with my time, lol

Bad luck with those biting monsters. They should been banned from the country altogether. I hope it's gone soon with those antibiotics!
The doors are cute for sure, so funny :)
Lovely flowers and they smell so nice too!

The fairy doors are darling! Good job buying yourself the gorgeous peonies! Yes to the wellies. ;)

I love, love, love the Fairy Doors. It seems the insects are in an aggressive attack mode world wide this summer and it also seems their bites are worse as well. Beautiful peonies.

I love the doors!!! My last trip outside left me with poison ivy or oak on my arm. It hasn't spread much, but it won't go away either.

Hmmmmmmmmmm....maybe with all of that free time you could STITCH???? Wouldn't that be fun? LOL

I look forward to seeing what you get up to.

The fairy doors are BEAUTIFUL!!!! I can't wait until we have a house again and I can putter in a garden!

Take care of yourself. Hope your nasty bite heals up quickly.

These fairy doors are so cute and look lovely under a tree.
Sorry to hear that you were bitten by something. I hope it is healed now.
Hmmm, I hope you won't get bored during this week, lol.

I can see a trip to The Works coming on, those fairy doors are so cute. I love having quirky things in the garden, little touches which you might not notice at first, I like people noticing something different each time they come in to the garden. You must be really prone to biting insects, though I suffer badly abroad, they don't bother me much in this country. Mick once got bit so badly at the allotment that he had to go to the nurse each day for them dressing. Your peonies are beautiful, and such a bargain too. Enjoy your quiet week, I'm sure you'll find plenty to keep you occupied.

I'm in love with your fairy doors, must go and see if we can find some. My husband always suffers like you when he gets bitten, he starts taken antihistamine straight away, sometimes it gets quite nasty so lots of sympathy here. Your peonies are quite beautiful xx

Ok Maggie I think you may have started a trend here heigh ho it is off to the Works I go. Your fairy doors are soooo sweet. So sorry to hear you have got bitten , Julie also suffers from biting creatures which she has a bad reaction to,hope you feel better soon ,hmm wellies sound a good idea.

I hope you are feeling better, your garden bites back at you. I got some Peony's in the same pale pink, they are stunning. I'm sorry I'm with Mark on the fairy doors, but my sister would love them.

Love those doors, especially like the mushrooms.
Gorgeous peonies x

Your fairy doors are so cute!

Glad your bites are improving. That is no fun at all.

Oh, your little doors are adorable, Maggie! I hope you get lots of good fairies walking through them :)

So sorry about your bites--I do think some people are just more susceptible to being bitten. I remember when my youngest son was small, every mosquito in the state bit him while leaving my older sons totally alone! Very strange...

Take care now and wrap up in the garden!

So sorry about the bug bites. I seem to attract mosquitoes, but you seem to be bitten by really nasty guys :-( Those Fairy Doors are amazing! By any chance would you prepare and sell one? My cousin would flip!!!! Don't get me wrong, I can see one in my backyard as well.

Oh dear, I hope that is the end of your bug bites.

Your fairy doors are pretty.

Awesome blog, i always enjoy & read the post you are sharing!
Thank for your very good article...!