An adventure in cushion making

Thank you for all the lovely comments welcoming my granddaughter to the world.  Mum and baby are doing fine, they came home on the Sunday.  I think they have had a few sleepless nights, which is to be expected but I think it still comes as a shock to the system doesn't it.

I managed to get a couple more photos on my phone this week when I popped round, I loved this one showing her chubby cheeks :-) 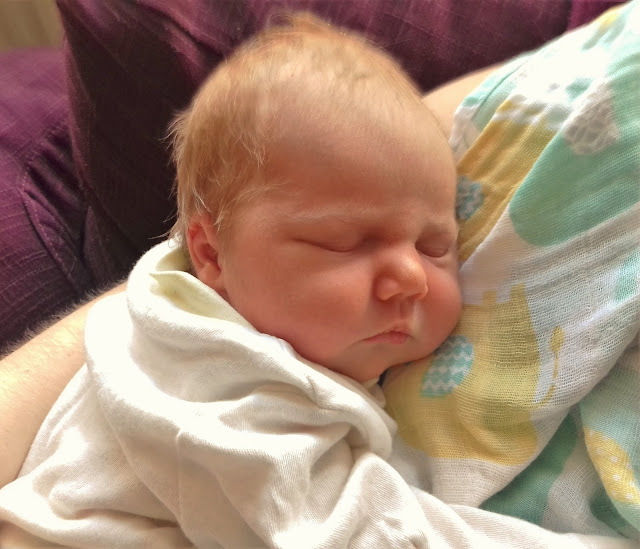 They have named her Bonnie.
Mmmmm, I must confess that her name is going to take some getting used to, she IS bonnie, there's no doubt about that, but as a name?  I'm not sure.  But as Mark has pointed out to me, it's not up to me.

I've had a lovely few days off work this week, it's been nice to have a lie-in and potter about the house in the mornings.  On Monday I went to Willow Brook garden centre, we had passed it on the way to Stratford a week or so ago and I made a mental note then to pay a visit.  I went early enough to treat myself to breakfast, I had eggs benedict, which went down a treat with a pot of Earl Grey before having a wander round to see what was on offer. 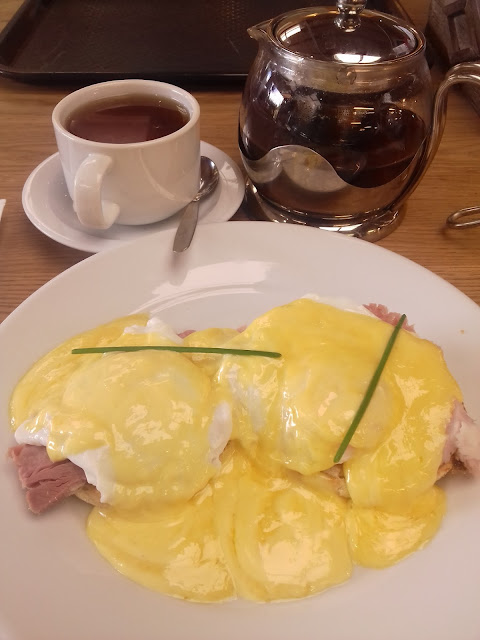 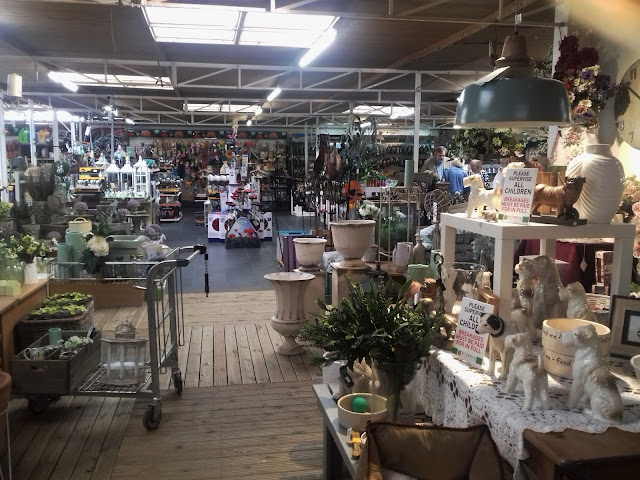 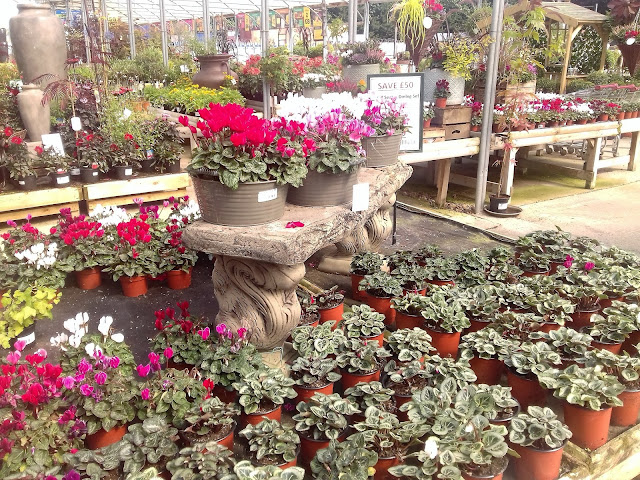 I picked up some plants on sale, some perennials which will fill a couple of gaps in the boarder for next year.  They were also putting out the spring bulbs so I picked up 3 packets of Alliums because they reminded me of pompoms :-)

On Tuesday night I went on a cushion making workshop.

I was browsing the internet in the morning and somehow managed to find myself following a link and a shop called Gutheri & Ghani popped up.  Apparently the co-owner was a finalist  on The Great British Sewing Bee, (I  must confess, I never watched the programme) but what caught my eye was the Piped Cushion Workshop which was happening that night, I ummed and ahed for an hour or so and then thought, why not! so I signed up.

Now I'm not very good at sewing, I'd like to be, but I do get in such a pickle with the cutting out and seam allowances and measuring, It's all just so daunting, but nothing ventured nothing gained eh?

Everything was provided and I paid online so all I had to do was show up.  The workshop ran from 6pm - 10pm but was in Birmingham, not the best place to be heading into at rush hour, consequently I was late because the sat nav wanted to take me on the busiest stretch of road, I had an idea there was a quicker way with less traffic but not knowing for sure I had no choice but to follow it.  I eventually turned up 20 minutes late, not a good start!

There was only 4 of us and it was a  really good class, there was a choice of material and piping and a paper pattern and work-sheet provided and we were talked through everything step by step.

Here is the finished article :-) 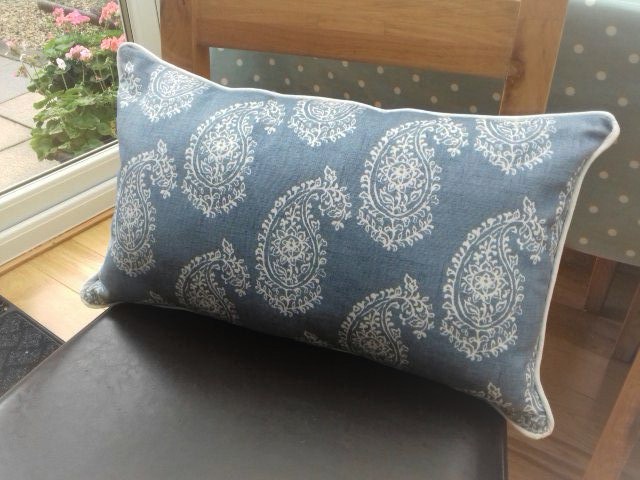 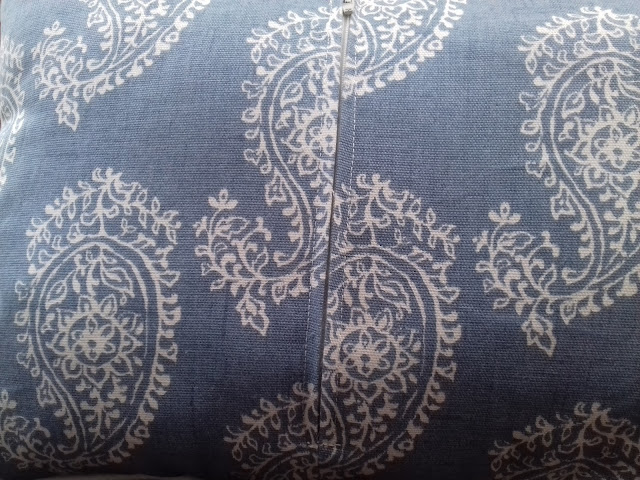 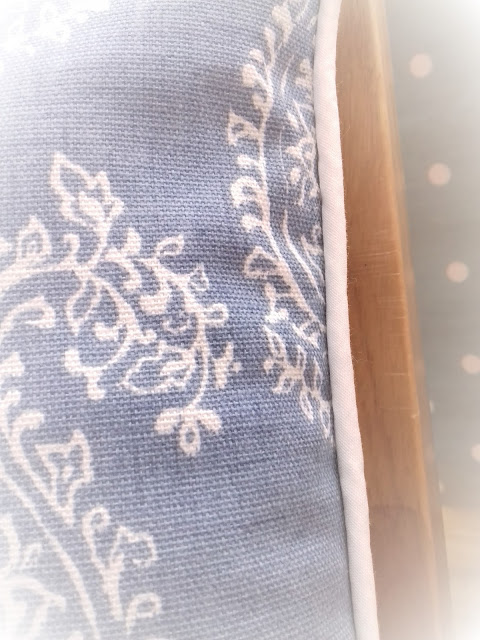 I'm quite chuffed with it :-) The piping's not perfect at the corners but I think it would pass unless you wanted to be really picky, but I did make a pretty good job of the concealed zip, even if I do say so myself, lol.
It's given me the confidence to have a go at home, I already have some material I'd like to use and I've had a trip to Birmingham Rag Market this afternoon to get some other bits and pieces I needed, so watch this space :-)

I have always wanted to make a pillow cover like that, but I figured it would be too hard. Yours is so pretty.

Little Bonnie is just adorable and I think it's a very pretty name.

I like the name Bonnie, I had a friend in high school who's name was Bonnie. she was a great girl. like you pillow

Your cushion looks so pretty.

Bonnie is a pretty name, the name actually means pretty.

I think you've made a fabulous job of the cushion and there'll be no stopping you now. I really want to be able to sew, it's just getting started that's the problem, I lack confidence in dipping my toe into the water. I think Bonnie's a lovely name, the sister of a friend at school was called Bonnie. I know what you mean about our children having different ideas to ourselves with names though, you should hear the names that Eleanor likes. Goodness knows what my grandchildren will be called when the time comes!

That photo of Bonnie is beautiful.
Your cushion looks great. I hope you are as pleased with the next one you make.

Oh my, Bonnie is just darling. Your pillow is very impressive to me Maggie.

Your granddaaughter is adorable....such gorgeous chubby cheeks! You'll get used to her name in a bit - it means pretty, and she certainly is that.

The garden center looks wonderful, I'm surprised you didn't come home with more - I certainly would have :)

The pillow you made is amazing....it looks so professional.

Awww... such a sweet photo of little Bonnie. She is just beautiful! And, it it helps, my niece's name is Bonnie and she is absolutely the sweetest, most kind and cheerful girl I know at age 44! Always has been a delight and I wish the same for your sweet granddaughter :)

Such a pretty cushion! I have made one myself a few years ago, and I have to say, it was a lot more difficult than it looks, and I made quite the mess of the corners! Part of me wants to redo it, but I'm scared I'll do an even worse job! You've got me thinking this might be a good way to learn it properly! Small classes are always lovely, you get that extra attention to hep with your individual problems.

The cushion is beautiful. And I love Bonnie as a name. It suits a beautiful baby xx

Bonnie is so beautiful, I rather like the name myself, it's a pretty name. Very impressed with your cushion, I'd love to be able to learn to sew properly. Birmingham rag market made my ears prick up too, is it a big fabric market? xx


Beautiful baby , I love the name Bonnie such a sweet name .
Lovely cushion love the colour.
Oh you took me back talking of the Birmingham rag market .
I use to visit there once a week and buy lots of materials for making my girls cloths.
Have a lovely weekend.

Great job on the cushion, very professional looking.
Bonnie is a lovely name.

We have learnt a long time ago, when it comes to names accept it, we have a couple of modern names for two of our grandsons. Love your cushion, so well made.