Empty nest, knitting and Tulips - (not necessarily in that order)

Jenny had asked for a chevron blanket for Arthur like the one I made when Joanne was expecting Bonnie.  I had enough yarn left over from Bonnie's blanket to make another one so that was a bonus. 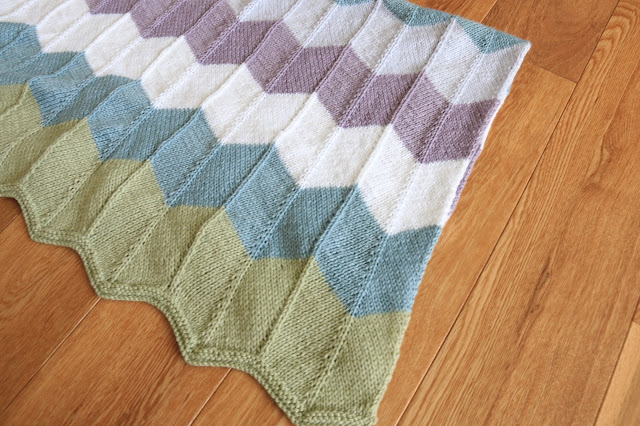 I thought it would be a fairly quick knit but that didn't quite happen.  I took everything with me when I went to Norfolk in March thinking I would make a start on it.  Well I made several starts, all of them ripped back, I just couldn't get it right, I kept ending up with either too many or not enough stitches.

Finally I managed to get the first chevron done but I think I had problems on almost every single chevron after that, either too many or not enough stitches or I didn't like how my stitches looked, honestly, you wouldn't believe how many times I've ripped this blanket back!!

But I persevered and finally got it off my needles, the ends sewn in and washed all ready for little Arthur, not that he will be needing it at the moment.  I did the peg blocking again :-) 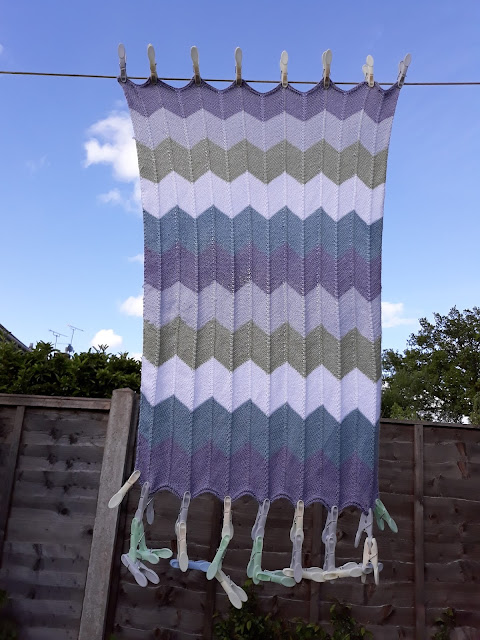 It's identical except this one starts and ends with the purple yarn.
I still have small amounts of the yarn left but It will definitely NOT be going into another chevron blanket anytime soon, lol. 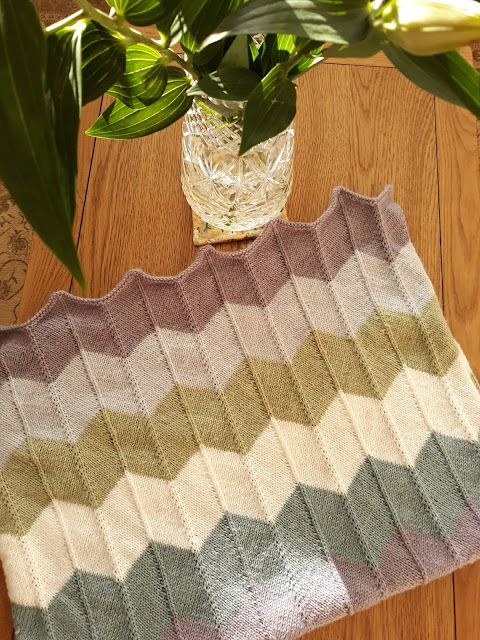 If anyone is interested you can find the free pattern on Ravelry.
I cast on 169 stitches, each chevron is 20 rows and I used King Cole Comfort Baby DK.
It is a lovely pattern and very easy to modify, (the difficulty I had  knitting it this time round was of my own making and my inability to count to 10. ;-)
~~~~~~~~~~~~
I'm slightly obsessed with the garden at the moment, I bought one of those little plastic green houses and it's full of plants just waiting to go into the window baskets and tubs, I've also grown a few things from seed this time and they are doing well although they are taking over the conservatory now so I will be glad to get them outside.

In October I found a bag of tulip bulbs in the shed, I'd obviously bought them the year before and never got round to planting them.  I put the majority in this planter, the others I planted in the garden and never thought they would come to much because our resident squirrel kept digging them up!

But they turned out to be the best thing about this Spring, the pink came first and they bought a lovely pop of colour to our garden.  Then came what I thought were going to be white ones 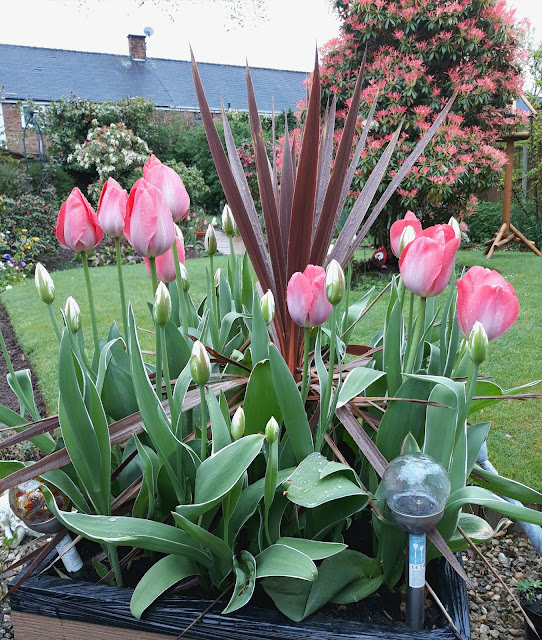 But no, they are red and white 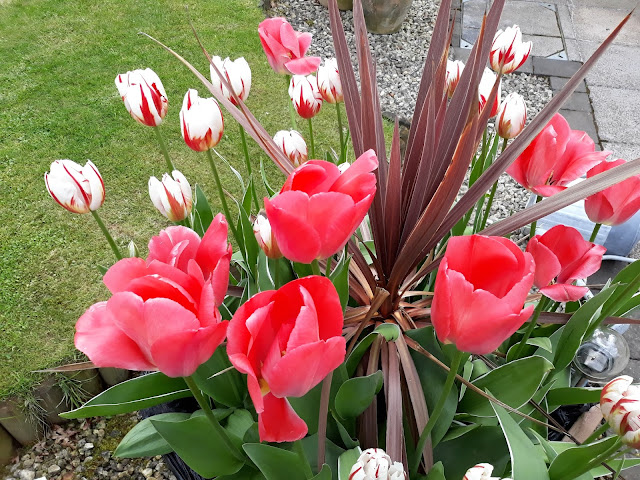 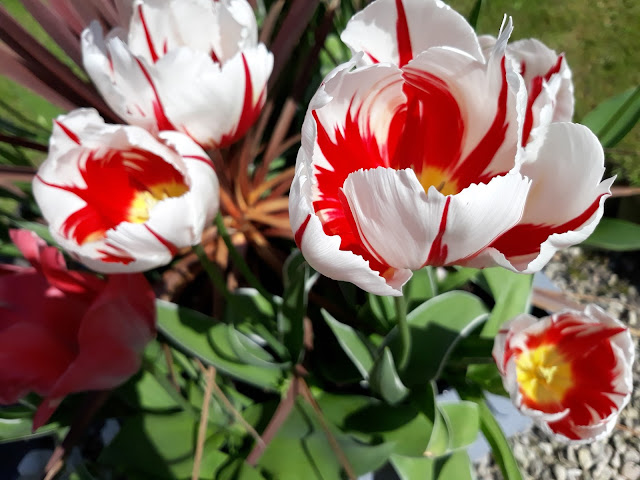 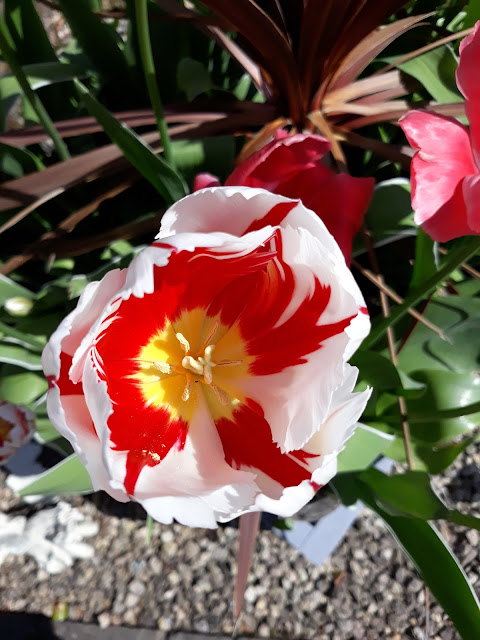 They are so beautiful, like they have been painted :-)

Because I just bunged them in this pot at the last minute and threw away the label I have no idea of a name, if anyone does, then please let me know because I want to buy more of these for next year.
~~~~~~~~~~~~~~

Stevie-Leigh and her boyfriend, Darren, moved into their house over the weekend, so I now officially have an Empty Nest!

It feels very strange her not coming back from work and asking what's for tea, and even more strange that she is grown up enough to have a mortgage and all that goes with being an adult.  Stevie is the youngest and I still think of her as being a teenager and to be honest I still did everything for her while she was living at home, I will miss her, but that doesn't mean that I'm not going to enjoy the extra time and less washing and cooking ;-)

Love your tulips, I can only grow them in pots here, can’t help you with their names. I have had a squirrel digging in my pots, I got some plastic floats for ponds and cut them down to pot size, used tent pegs to hold them tight and it’s stopped all the digging, the only issue is I had to do every pot. They are not solid put at plastic trellis, and not expensive, I will pop a photo on my blog next post.

Sorry, I should have said your knitting is beautiful, I always have trouble counting. Enjoy your extra time .

The blanket is really lovely. I think you're very brave knitting a blanket, I've only crocheted them in the past, they don't take as long as knitted ones. I'm sure Arthur will be very warm and snug when he's wrapped up in it. Your tulips are fabulous, I can't help with a name but they're some sort of parrot variety. I have tulips in my garden which were planted before we moved here and that's nearly twenty five years ago now. They still come up year after year. Wishing Stevie-Leigh and Darren many years of happiness in their new home. I'm sure you'll soon get used to the peace and quiet, it actually takes me time to adjust when Eleanor comes home from uni, I've got so used to it just being Mick and I, though I always have to adjust again once she goes back.

Lovely knitted blanket.
What beautiful tulips your garden looks full of blooms.
You will soon get use to an empty nest, more time to do the things you love to do.
Have a good weekend.

I love the chevron blanket. My blanket making skills start and end with the standard crotcheted square.

Hi Maggie wow i love your chevron blanket and the colours are beautiful,well done my friend .Your tulips are so pretty what a beautiful garden you have xx

Where to start?! Your blanket is gorgeous-I crochet, but not quite that good at knitting yet. The tulips must have been a nice surprise when they came up! Those colors are striking and lovely. And I know where you are coming from on the empty nest. My son and his girlfriend live with us now as they are both in college, but the empty nest will be right around the corner. I keep telling myself that it means more stitching time! :D

What a pretty blanket! The tulips are gorgeous too...what a lovely surprise.

I think you're a hero with the knitting test this time :)
The tulips are all beautiful, enjoy!
Oh, the empty nest ... Officially we have the same 'stage' here but I often wonder when we have some time alone LOL