I bought the Arthur Rabbit kit by Sardines For Tea when we went to Yarndale last September, my intention was to get it done ready to put into Arthur's Christmas stocking.

Well, clearly that didn't happen, I had all his body parts knitted up and then we had all the drama of Jacob's birth so it got stuffed back into the bag. 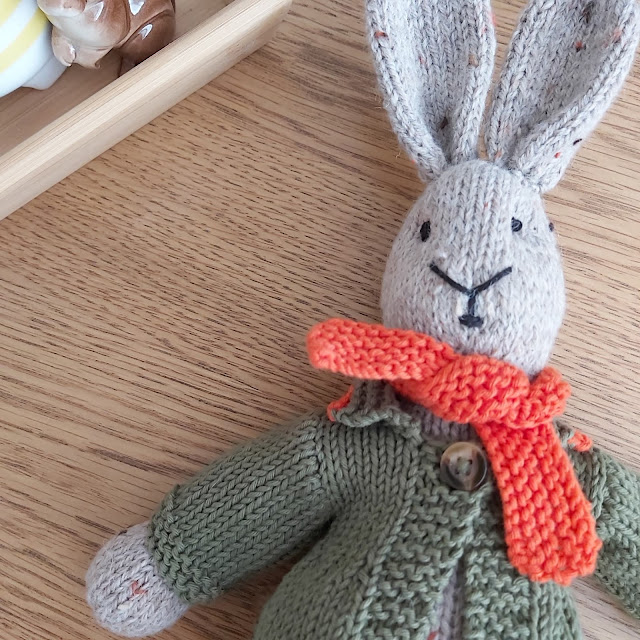 It's my Grandson, Arthur's 2nd birthday in a couple of weeks and with more time on my hands I set about sewing all the bits together.

Does anyone else think there should be more instructions on knitting patterns?  I don't like sewing up at the best of times, but a little more guidance other than 'attach the head' and stitch the eyes and nose as the picture' would be a helpful.

But I managed it, even though it took me all of an afternoon.:-)

The coat was the worst bit to sew together, I found it very fiddly and the face took me about four attempts, but i'm happy with him now :-)

When it came to the collar on his coat there wasn't enough green yarn to finish it, by two rows!!
So the last two rows I knitted in the orange used for the scarf.  I don't think I was wasteful with the yarn, so it must have been my tension.  And I'm sure Arthur,(the boy, not the rabbit), won't even notice. 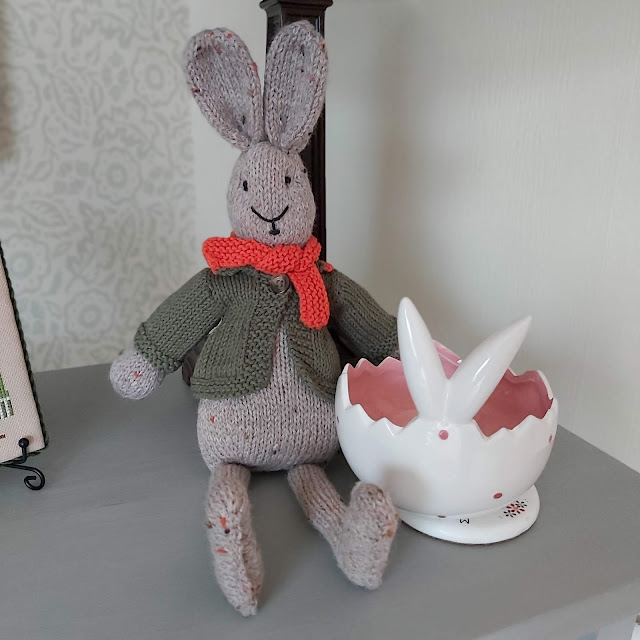 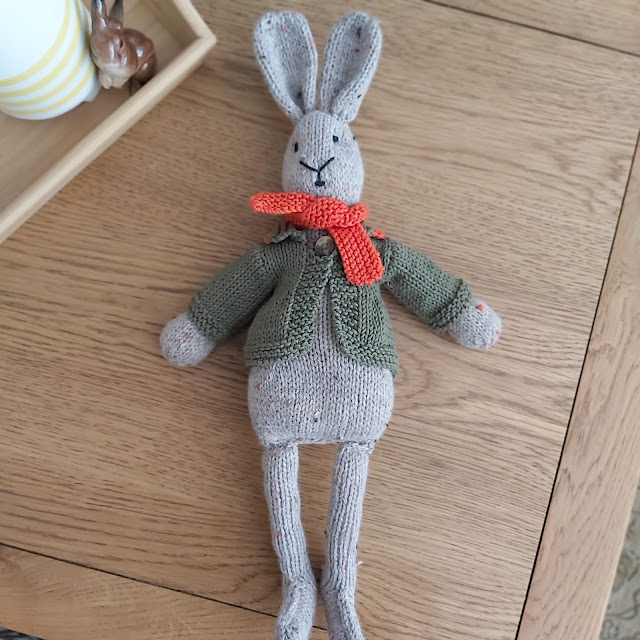 I have Albert, the big rabbit, also by Sardine's For Tea, he's been tucked away for almost twelve months, I bought him for myself when I went to Wool@j13 last year, but I don't think I can face another teddy just yet :-)

I think he is GORGEOUS!

He is lovely, my knitted rabbit is ready to be sewn together at some point, the knitting is much easier than sewing together.

What is it about rabbits that is so appealing, I love them, sewn, crochet or knitted. He's lovely.
I agree about patterns not explaining well enough.
It's as though they think you should know it all isn't it?
very frustrating sometimes.
Briony
x

Oh I just love him!!

He is lovely and will be much loved I think. I have 2 grandsons - Jacob and Arthur!!

Awww, Arthur's fabulous, you've made a great job of him, and Arthur will be thrilled. As for sewing things up, it actually puts me off making thinks because my sewing skills are just non existent.

Love Mr bunny .
He is so cute.

He's adorable, but he's a bunny so I would say that.
I like the 2 row orange on the collar, it looks like it was meant to be there to match the scarf.

Arthur rabbit is gorgeous and I'm sure will be loved by Arthur.

The rabbit is gorgeous, and to tell the truth until you mentioned the orange on the collar, I never even saw it.

He's cute and I'm sure your grandson will enjoy him. I like the orange trim on the collar, looks planned. Yes, we certainly have more time on our hands, hope you and yours are fairing well.

You make the most beautiful things for your grandchildren, Maggie--just love this sweet bunny :)

It's a lovely rabbit.