1st December - All the advents

Happy 1st of December.  I hope you are having, or have had, a lovely day.

I'm re-using my lovely traditional advent calendar from last year, no chocolates behind these doors, just a pretty picture. 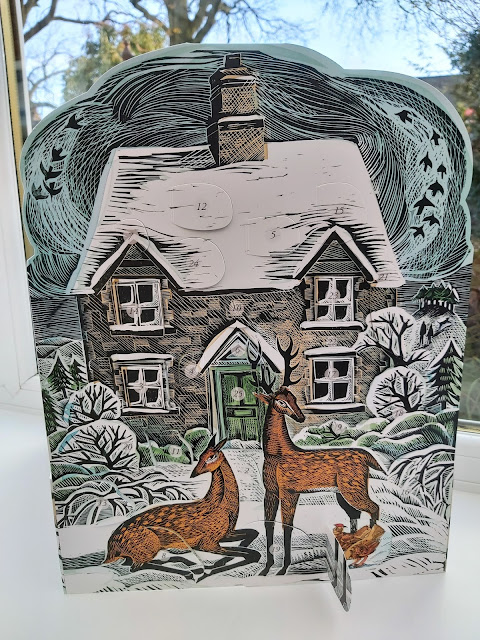 I've treated myself to two yarn advent calendars again this year, a Liberty inspired one from Claire at Mr & Mrs Rabbit yarns and a Mistletoe Kisses one from Ellie at Crafthouse Magic
I had the twelve day calendars from both and will alternate opening them so that they last the 24 days.
I've put both of these into one box to make it easier, the Crafthouse Magic ones are in the silver bags 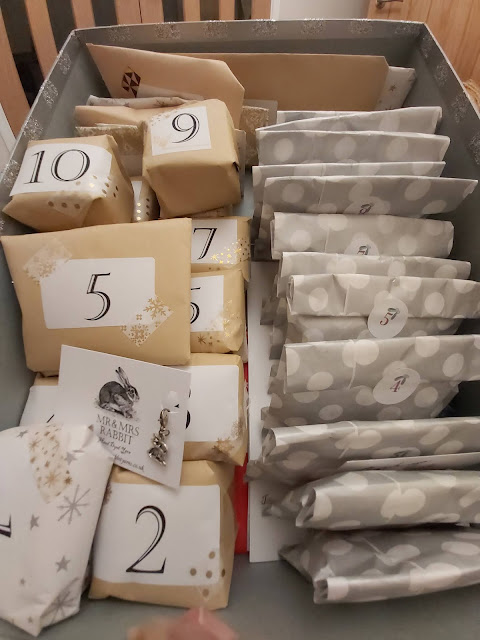 I've also done a swap with my lovely friend Jo (jothroughthekeyhole).  We agreed to swap 24 6g minis from our stash and a 100g skein for Christmas day.
Jo's arrived in this huge box, isn't it lovely? 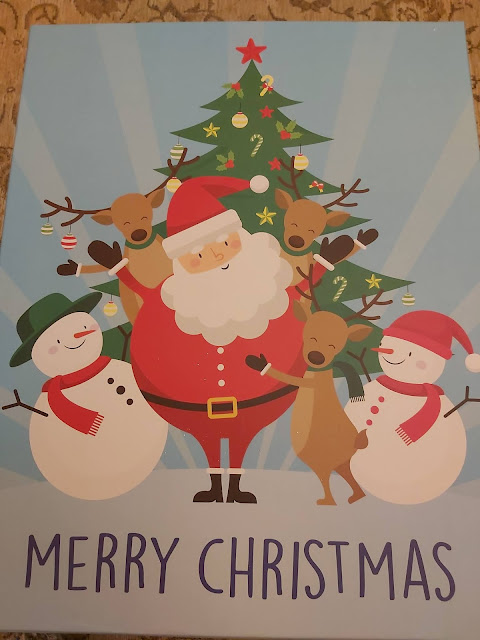 Inside everything is wrapped beautifully.  The blue ones are to be opened on Christmas day and Jo also very kindly included a few things to open on my Birthday which is the day after Boxing Day, so kind. 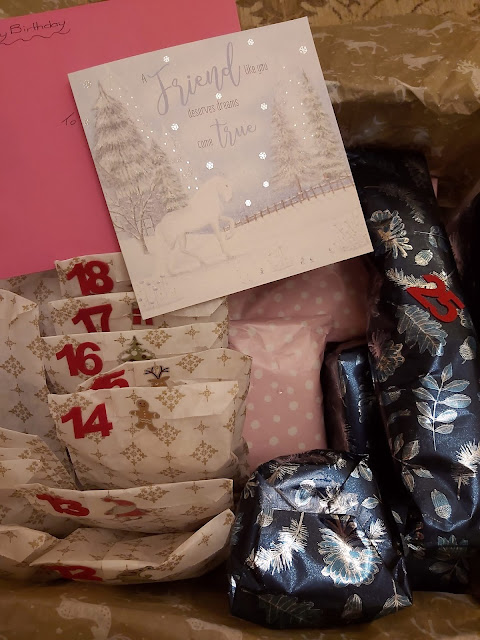 I also took part in a swap on IG organized by Kelly of Layfamily Yarn.  The brief was to include 24 minis, a chocolate treat and a handmade gift, my partner's name is Lisa, who as far as I know does not have a blog. 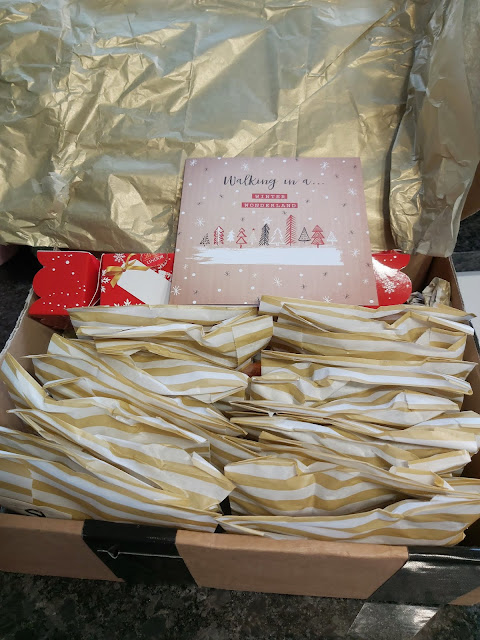 Yarn advents can be quite expensive to buy so early on in the year I had started to buy some a mini skeins here and there to put together my own.  My plan was to add to it when I went to a couple of yarn shows in the Spring.  Well that didn't happen, obviously, but I did manage to get enough to make up another twelve day package and bagged them up with my eyes closed, lol, which is quite difficult to do! 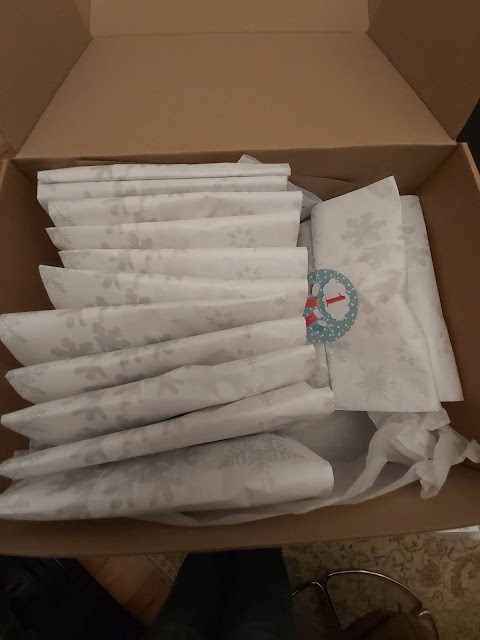 I've decided now to save these until after Christmas, perhaps give them to myself as a little birthday treat and start opening from January 1st.
So, at last, here are my goodies for today.  Two little packages from Mr & Mrs Rabbit, some lovely handmade soap, a square of Liberty fabric and a Liberty inspired yarn.
From Jo I opened a Hedgerow yarn mini and a little chocolate, which you will notice is missing because of course it's quite acceptable to have chocolate for breakfast during advent  :-)
The other little mini is my swap from Lisa. 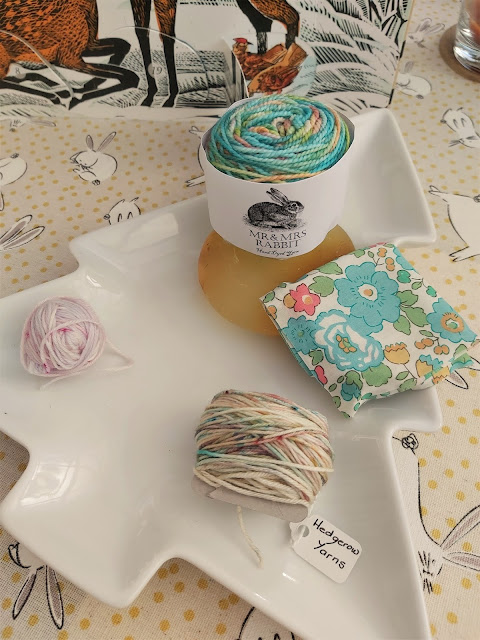 Mark got Christmas from the loft on Sunday and I have promised to sort it all out this week and only keep what we will use as he says he is getting too old to keep getting up the loft!  I have already started on that and got rid of a few things, including giving one of our trees to Oliver and Arty, they share a small tree which they decorate themselves which was getting a bit crowded, now they have a six foot one which should be better for all their ornaments.
For the first time in many years we don't have our tree up on December 1st.  I did want to get a new tree this year and we've been out looking and I just can't find one that I like that doesn't cost a small fortune.  I might just have to settle for our old one for another year or get a real one, I haven't decided yet.   I usually like to get everything decorated in one day but I'm afraid it will be happening bit by bit over the week this year.
Other goings on this week - It's been all go here since the weekend, my youngest daughter, Stevie and her fiancé Darren got the keys to their new house on Friday.  They should have been in at the beginning of July but because of you know what, building was delayed.  Anyway, they are in now and slowly unpacking all their belongings which have been in storage for the last five months or so.  There are a couple of issues they have had to get in touch with the builders about, like the fact that they have a space for the washing machine but no plumbing for it!  So guess who is doing the washing until it's sorted, yep, good old mum to the rescue again.
Jenny's partner, James has finally arrived back home today.  I think I've mentioned before that James is in the RAF and has been in Afghanistan for the last five months.  He should have been back in October but things are apt to change and his date kept getting put back.  It's been a long five months for Jenny and the boys, it's hard enough with kids but I think Jenny has found it especially hard going this time, the boys can be a handful at the best of times but with clubs not operating for them and limited places open for outings and the summer holidays too, it's not been easy.
Well, that's it for the first day of advent, lots going on, not a lot of crafting though :-)

See you tomorrow for the next installment

I am so glad James is home, We watched our DIL deal with everything for the 15 months that our son was in Iraq. I think that after that they shortened the tours to 12 months. Love all your wonderful advent things. I hope your tree problem lets settled. Mine is not up either. It seems that each year gets a bit harder to get it all done.

What lovely advent calendars you have. Enjoy them all.

What lovely advent goodies ,I love to see whats in them a bit like a child ha.
I like the wool that matches the material.
Good that your son in law is back for Christmas .
My husband won't go up the loft any more . So I have a loft full of things up there and 3 big trees .
One day I will have to get a family member to go up or have a loft ladder fitted.
I brought a nice small tree from MS it's pretty with with snow on it.
Enjoy your build up to Christmas hugs.

You've got lots of lovely treats to open throughout advent, it does make the countdown to Christmas all the more exciting, doesn't it. I like the Liberty inspired calendar. We were looking for a new tree last year and then decided to look for something after Christmas in the sales as they're so expensive. We didn't find anything and we're stuck with our old tree again this year, not that we've put it up yet. I shall definitely have a new one next year, definitely definitely. Glad to hear that Stevie and Darren got the keys to their new house, there's always teething troubles when you get in that you can't have foreseen, I hope they get the plumbing issue sorted soon. Good news that James has arrived home, the boys must be so excited to see him after such a long time. I hope he's home for a while now, it must be hard for him to be away from his family, and for Jenny managing alone with the boys.

Great news for all your family, it's been a worrying year. Your advents look amazing, your December will be very exciting opening your parcels.

Sounds good news for all your family.
I like your advents.