I hope your Saturday has been more productive than mine.  I had planned on going to Ikea, not to browse, there is something I've been planning to get for a while so it was going to be in, grab, out and home again.  Mark had gone to Stevie's to put up curtain poles and blinds and I planned on being back by early afternoon but, after someone saying they would be here at 12 o'clock and not turning up till 2.30 I didn't get to Ikea until after 3pm.  I parked, got out the car and then saw the queue.  I promptly got back in the car and drove away.  I'm not desperate enough for anything to wait in a queue THAT long!

On the way home I had to do a quick food shop so didn't get home until gone 6.  So you can say that today was not the most successful.

I'm going to try again tomorrow and get there for when they open.  I don't really like to go on a Sunday but what I want needs putting together and as Mark is away all week it would mean waiting until next weekend.

Anyway, enough of my little rant, here are the lovelies from today's advents/ 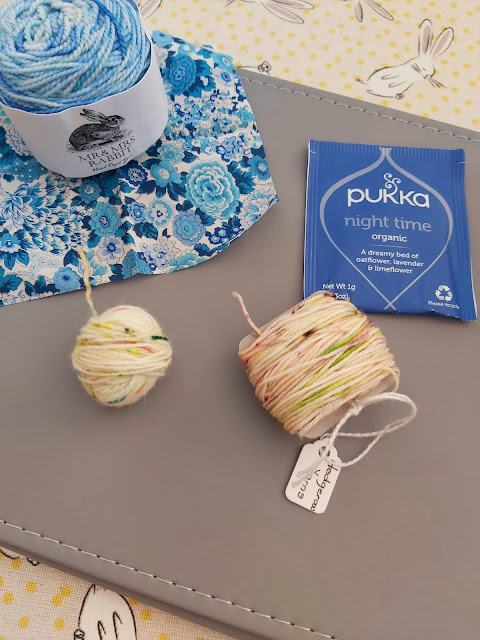 I have a night time tea most evenings so I will enjoy this one tonight Jo, thank you :-)
The five minute project in the title actually took about ten minutes in all but the point is it was very quick :-)
I have three artificial wreaths and wasn't going to use them this year but when we were on our walk around Arley yesterday we 'acquired' some lovely greenery, is it holly?  I don't know, it's pretty greenery anyway and I made this. 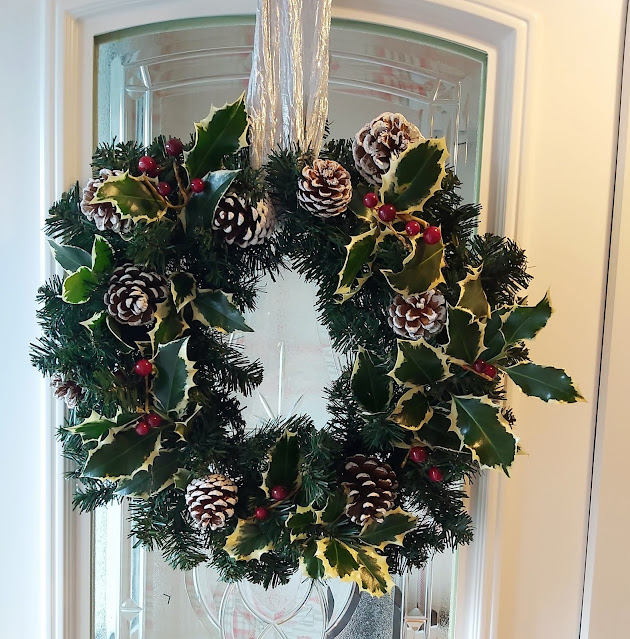 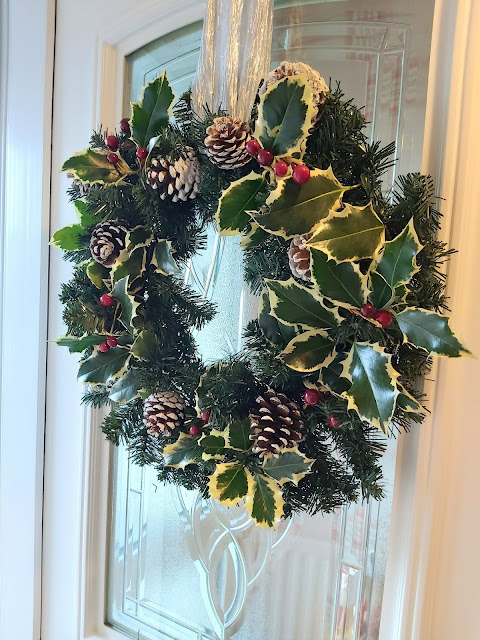 I already had the snowy pine cones the silver organza and the red berries.
I'm quite chuffed with it, although I think It could do with a bow, what do you think?
Wish me luck for getting in Ikea tomorrow :-)
-X-
See you soon...... Maggie

The wreath looks lovely, and I do believe that is in fact holly. At least what I consider holly.

I have an online shop each week so am lucky but I prefer to go to the shops. the queue's everywhere are putting me off at the moment as neither of us can stand in queue's. Be glad when this lots over. lol
Briony
x

Lovely wreath, ours is on our back gate this year as we have just had a new front door haha.

We all get days like this , hope today will be better and you get to Ikea .
Wow love the wreath you did a great job .
The Advent is lovely again .
Have a fun day .

Yes it's holly and the wreath is lovely, I wouldn't waant to wait in a long queue either it's too cold, I love your advent treasures, good luck today!

The wreath's beautiful, what a fantastic job you made of it. In and out of Ikea? Is there such a thing? I know I'm in the minority but I loathe that shop, once you're in you're in and they don't like letting you out again, haha. I've spent hours wandering round the one way system just trying to find my way out, haha. Anyway, I hope your trip today is more successful though there seems to be queues everywhere at the moment.

I think the wreaths are lovely as they are. The silvery hanging ribbon is gorgeous.

Love your wreath, very pretty. Good luck at Ikea tomorrow. I've never been to one since there are none in this area.