Nine years ago this month, probably almost to the day, I started stitching on Elisabeth Jackson. 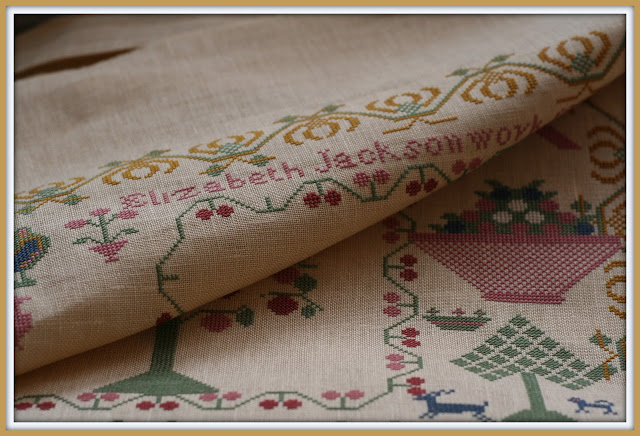 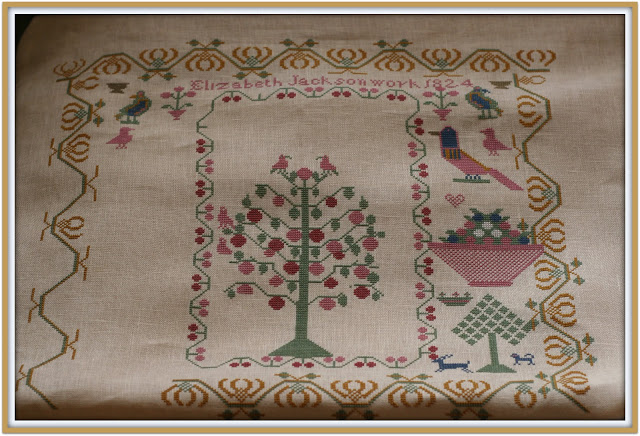 The photo above shows how much stitching I'd done and was the last time I worked on her, March 2012.

Fast forward a good few years and I joined a group on fb where people posted their unfinished projects and asked if anyone would either finish it for them and send it back or alternatively you can put you unfinished project up for adoption.

I still had some affection for Elizabeth and didn't feel I wanted to put her up for adoption, so, I asked if anyone would be willing to finish her for me.  Lo and behold a lovely lady called Nadia said she would do it for me.  We didn't know each other so it was a bit of a leap of faith for me to pack Elizabeth up and send her to someone else to stitch on, but pack her up I did.

That was back around the end of July last year.  Nadia messaged me a couple of times letting me know how she was getting on but the last time I heard from her was around October/November and then with Christmas and New year to be honest I forgot about poor Elizabeth until Nadia messaged me to say she's done!

I received her back in the post last Wednesday, do you want to see? 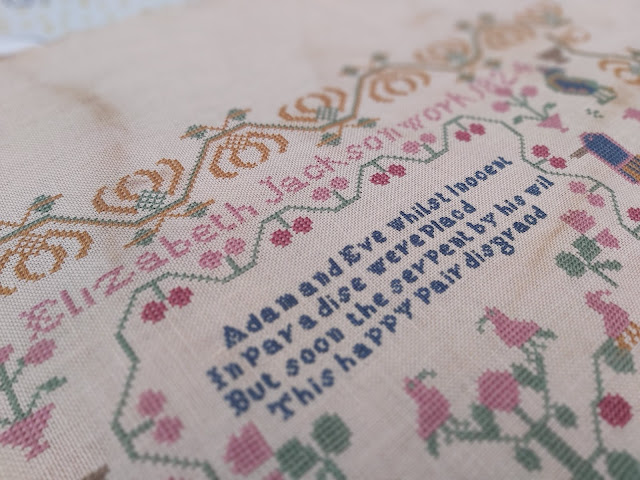 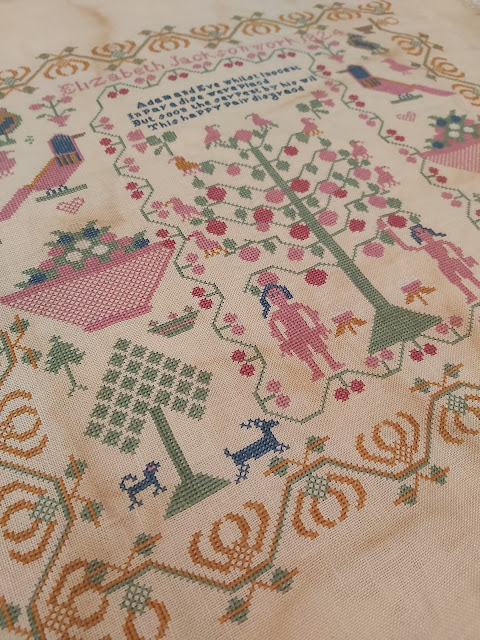 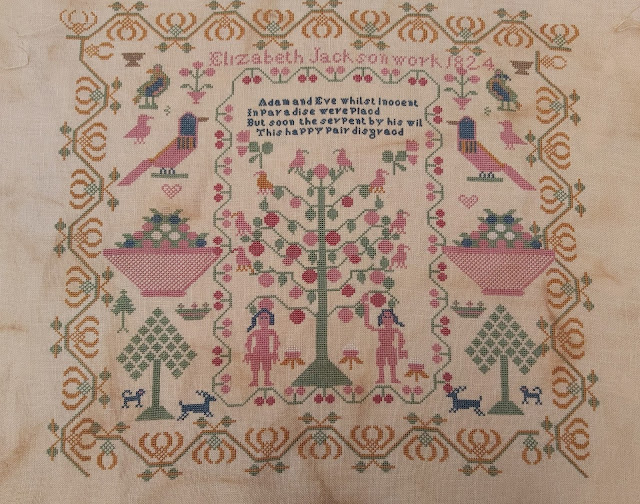 Nadia did an absolutely brilliant job, she's a stitching angel!  The back is as neat as the front, you would never know that two different people had stitched on this, I'm so happy 😁

The lighting in the photos is not brilliant its making the fabric look slightly different in all of them, I would say the last photo is more true to colour now.   To tell you the truth, I didn't really like the colour of the fabric, never did, it had a yellow tinge, and that was probably one of the reasons she got put to one side.  So, when she arrived back I gave her a bath in tea and coffee, and put her in the oven to dry 😨

But it's ok, don't panic, she came out fine.  I'm still not totally in love with the fabric colour but it's toned down the yellow-ness and given her an aged look.  I like it.

As soon as lockdown is over i'll take her to be framed.

I now only have one very long term WIP left, I won't be asking anyone to finish that one though as I know once I force myself to pick it up I will like working on it.

What's the longest WIP you have hidden away?

Very nice. Is it missing leaves on the top and bottom motifs on the left?

Hi Nancy, thank you. No, there are no motifs missing. This is a reproduction sampler and as such is a remake of an original, which were not perfect or even symmetrical.

Maggie don't ask, I have a few including the most expensive kit ever, over£100 an American design stitched 1 over 2, which I hate, who knows one day.

Oh wow that is amazing I bet you can't wait to get it framed. I think the colour looks fine. I have a crochet blanket I would say a third complete, that's been put away for about 5 years and I still can't face it.🤦

What a nice success story! I've never heard of this before, but I'm so glad it worked out--you and Nadia created a lovely piece, Maggie! You are braver than I am--don't think I would have dared put her in a tea bath :) Hope you have a lovely week ahead ♥

It's fabulous and what a great way to get it finished if you don't want to work on it yourself. It's got a nice story behind it now too, something I love with something you're going to be passing down. As you know, I've got that tiny cat cross stitch which I started in my early teens, so probably forty years ago, and that still isn't finished!

I have two left in a drawer, not sure if they will ever reappear. Nadia did a super job and I like your tea dye look, it adds to it's age.

Maggie, this is just lovely! I love the tea dyeing-great job!

The longest I have set aside a project is two years. Speaking of that now that the light is lasting longer I should get back to it and perhaps even finish it.

Oh my gosh, she is beautiful! I do know what happens when the fabric is off for you. I have a huge piece of linen I probably paid quite a bit for and every time I consider it for a project I see tints of pink. Maybe I should dye it!

Oh It beautiful .
I have far to many WIPs ,
Not sure of their age .
But I do want to finish three a year now if I can .
Or I would be happy with one.

I have Teresa Wentzler's Unicorn that is stitched on black 14 ct aida. If I'd known about evenweave when I started it 25 years ago I probably would have swapped the fabric. Instead after 23 years I found it again and every so many often it comes back out the naughty bag and a little more gets stitched then I get distracted by something else ad back it goes into the bag for a whilMay be when I have finished my current projects it will come back out again for a while especially now the light is getting better.

Nadia did a lovely job of finishing the stitching.
You were brave on two accounts: sending it to someone else and tea dyeing it! I would have been nervous about doing either but I think dyeing it would have worried me more.

It does look good and it will be wonderful to get it framed once things are allowed to open up again.

The group that finishes other people's stitching projects sounds like a good idea. Now that it's complete it'll be good to get it framed when that's possible. I would have been nervous about steeping the material in a tea solution. Did it change the colour of the yarn?