A new venture and a catch-up

I didn't plan on being away from my blog for this long, it just sort of happened and I must confess that I haven't been visiting or reading any of your blogs either, I plan on trying to catch up with all your goings on this week though.

Today is Bank Holiday Monday here in the UK and as is usual on a Bank Holiday the weather is pretty dismal, looks like rain has set in for the day.  We have never been ones for planning outings on BH weekends anyway, when I was going out to work that bonus day off in the week was a chance to just be in home and do what I wanted, plus the roads are always busy at these times and sitting in traffic is not my idea of fun.  Of course this is also the first Bank Holiday since lock down eased and I have a feeling every man and his dog will be heading out, so it's another day at home for us.  I'm resigned to stopping close to home now if I'm honest, I still haven't been to any shops other than to do my food shopping, I think I may be in danger of becoming a recluse!

I can hardly believe we are in May already, we did have a lot going on in April which is probably why it flew by, although I do thing the older you get the faster time goes by.   In April, as well as Easter we also celebrated Arty's 3rd birthday and my youngest daughter, Stevie-Leigh turned 27. 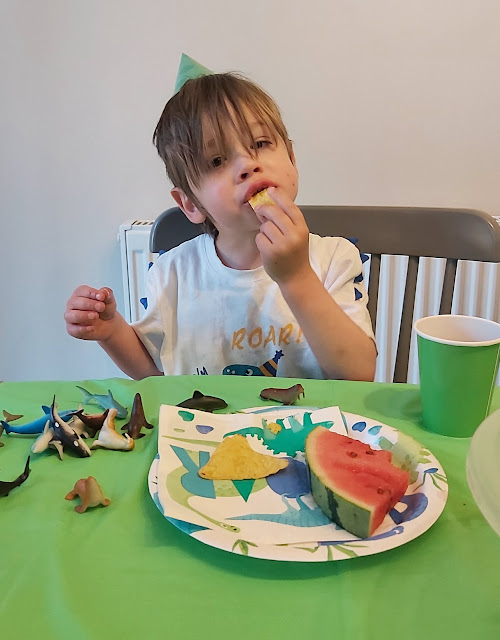 Jenny and Oliver made him a Dinosaur cake 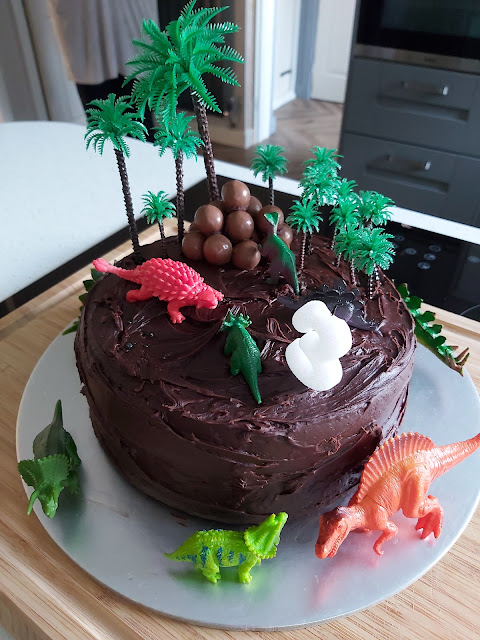 No parties of cause for either one of them but I did get to share in Arty's birthday tea and I went out for a meal with Stevie and Darren for her birthday, (Mark was working away on both birthdays).
For Stevie's birthday she booked a pub meal and of course we had to sit outside to eat, it was boomin freezing and lol.
I made her a cake and Oliver decorated it.  It was a red velvet cake, but I've just remembered that I never did get to taste it, I'm sure it was ok though. 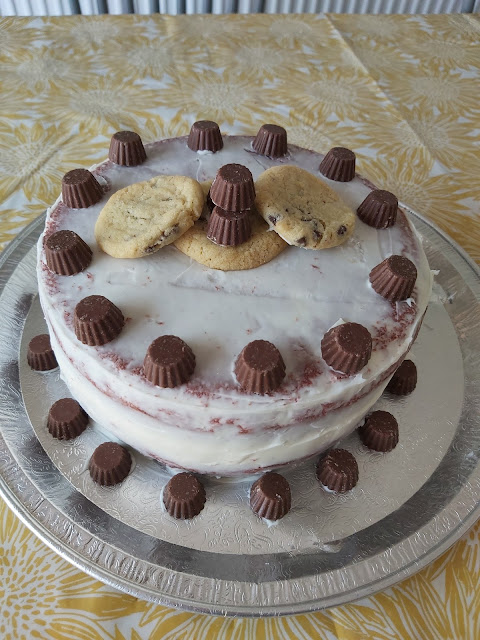 Stevie and Darren also had a new addition to their family.
This is Ralph :-) 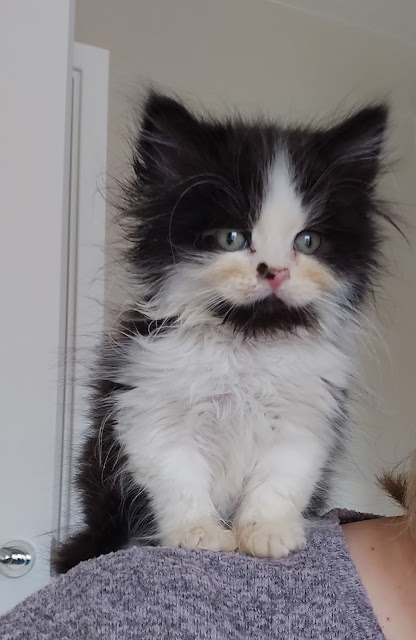 Isn't he sweet! You can see he has already found the comfy blanket on the bed, lol 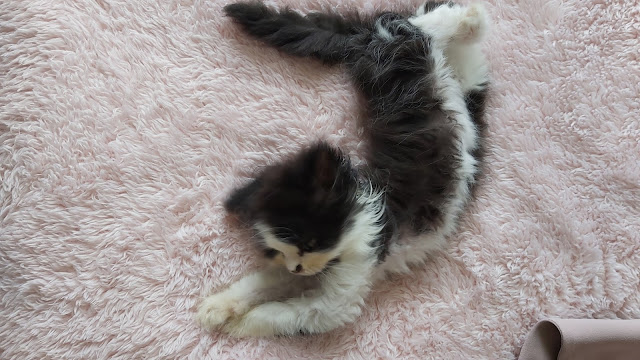 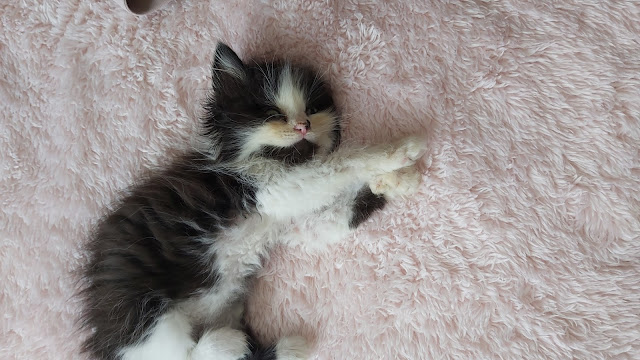 There has been a few problems since he arrived.  The people they bought him off were not entirely honest about his health.
When Stevie went the vets to register him and get him checked over it was discovered that he had an infection in his nose and was swabbed for ear mites, (the swab did confirm ear mites the next day).
Stevie did say that the woman they bought him from took him into another room to wash him before they went away.  I thought that was strange and the vet, without Stevie saying anything said that his ears had been cleaned with something.
Stevie messaged the breeder to tell her what the vet had said but she denied that there was anything the matter when he left her and was quite rude.  Once it was confirmed he definitely had ear mites Stevie messaged the woman again, because if  Ralph had ear mites then so must her other cats and kittens because apparently it is very contagious and so thought she should know.   At first she ignored her message but then said she would refund her £150 (of the £200 they paid for him).
He's settling in lovely now and making himself at home as you can see :-)
I didn't do much in the way of stitching or knitting during April but I did do a lot of sewing. 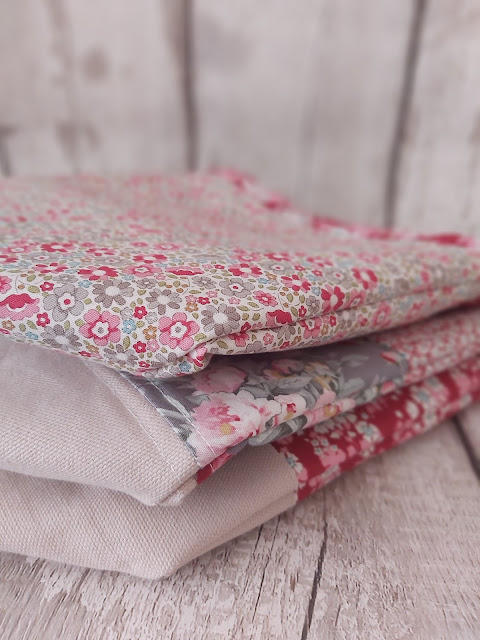 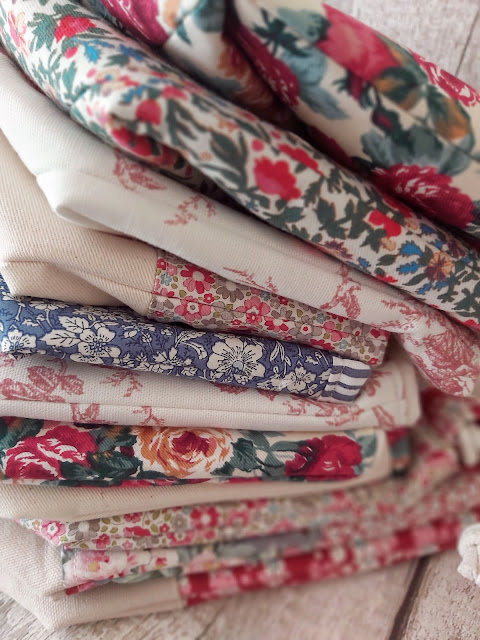 I have thought for quite a while that I would like to open an etsy shop and so this weekend I took the plunge and did just that.  I'm very nervous about putting myself out there and not at all good at self promotion so I don't know how things will go, but if I don't try I won't know will I?
At the moment there are some project bags and a few fabric baskets/pouch's but hopefully I will be adding more things in the next couple of weeks.  If you would like to pop over and have a look what I've been making you can find me by searching Mayfairstitches on etsy.
I hope you have a lovely week and enjoy this Bank Holiday whatever you are doing.
See you soon
-X-
See you soon...... Maggie

It's pouring down here too, it's definitely in for the day, and it's so cold. Roll on the warmer weather. I think you're a family of talented cake-makers, all the cakes you show on your blog look so delicious. I must admit that I've never made a birthday cake, my kids have been badly done to as they've always ended up with bought ones. Oh, isn't Ralph a cutie. There's some unscrupulous breeders out there, I'm glad Stevie got some of her money back, and I hope that the vet has sorted him out. Good luck with your new venture. I love the fabrics you've used for your bags, baskets and pouches. I love the bags you've made for me and use them all the time so I'm sure you'll have many very happy customers.

What a bitch treating a kitten and other cats like that. How would she like mites in her ears. Poor lovely little kitty. glad Stevie got most of her money back, she should have gotten all of it. I would tell the vet where she got the kitty and have him go visit her with the pet police and get her to take better care of the kitties. hugs Lynda

That dinosaur cake is amazing - simple but so effective. I'm afraid my girls tend to get a shop bought cake but when my Sister and I were small my Mum made us some amazing birthday cakes.

Rainy and dreary here today too. I guess it's to be expected this time of the year. Your cakes are beautiful... I just love the dinosaur cake. I peeked into your Etsy shop and your items are beautiful and I thought the descriptions were just perfect. I wish you the best of luck in this endeavor! Have a great week!

All the best with the Etsy shop , I m sure you will do well your work is beautiful.
What a beautiful kitten , she will have a good home now , lets hope she the lady
Looks after the others .
Enjoy your day.

Congratulations on opening your shop, how exciting. Ralph looks an absolute sweetie, I'm glad he has found a good home with your daughter. It makes me very cross when i hear about disreputable breeders.
Jean

What lovely cakes! That dinosaur one was so cute. good luck on the etsy shop. I will be taking a look. Will you ship to the US? Such a cute kitty so bad it came with so many problems!

Good luck with your etsy shop, I'm sure it will do well as your crafting is always so lovely. Nice cakes, it will be so much better when hospitality is indoors again. Sorry Ralph had a rough start, he looks so cute

Like you Maggie, I always think that BHs are best taken at home. I don't see the point of being stuck in traffic or spending ages trying to find a car park.
Your bags are lovely. I hope they sell well.
Ralph is a cute kitten. Unfortunately there seems to be an increase in the number of less than honest dog and cat sellers out there. No matter how careful you are it's still possible to get caught out. Hopefully he has a long and healthy life in front of him.

May has been a wet month hasn't it and no sign of a let up yet!
Ralph looks a sweetie.
Good luck with your Etsy shop.