Our Monday outing today was to Wightwick Manor, (pronounced Wittick), a Victorian manor house who's owners were passionate about the Art's and Crafts movement.  Today the house is owned by the National Trust for everyone to enjoy.

The house was built by Theodore Mandor who's family were successful 19th century industrialists.  It was built in two phases, the first being completed in 1887, the house was then extended in 1983 by the addition of the Great Parlor wing.  Theodore and his wife decorated the house with designs from William Morris and the Arts and Craft movement, which was popular at the time.

Theodore's son, Geoffrey Mandor persuaded the National Trust to take on the house even though it was only 50 yeas old, the collection were so complete that it was considered worth preserving.  Descendants of the Mander family still retain a private apartment at the Manor.

Only the ground floor of the house is accessible at the moment, not sure why, but there are beautiful grounds to walk around and enjoy too. 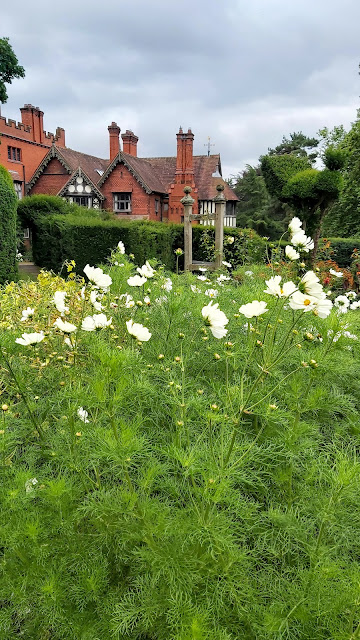 In the kitchen garden we found some very big pumpkins and a scarecrow!

There are more photos on a post from August 2016 of Wightwick Manor HERE.  It was a better day weather wise than today and more photos of the inside of the house, there is also a very little Oliver, lol.
On the way out we took a look around the shop, National Trust shops are a little on the expensive side, but it's nice to look, we came across a basket full of wrapped books, I can't resist a surprise book and at £3.00 each was worth a chance.
There is a tag with a little clue as the what the book is about, the one I chose said...
Full of warmth, humor and compassion.  This story tells of the people of a sleepy Irish town, each with their own tale as they wait for the great road of progress..... 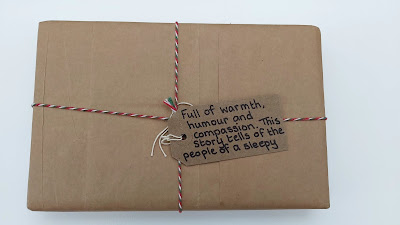 I thought this was such a brilliant idea.
Does anyone have an idea as to what the book might be from the writing on the tag?  I haven't got a clue, but would love to read your guesses :-)
I'm not going to open it until I've finished my current book, then I'll let you know what was inside.
-X-
See you soon...... Maggie

What a beautiful place to explore! I have no idea what your book might be but I can't wait to find out!

Hello there, this is the first time I have stopped by, but I love the photos of the Manor and gardens. Such a lovely place. I am not sure about your book, however I do remember reading a book by Maeve Binchy called "Whitethorn Woods" which sounds quite similar. I will be curious to hear what the title is.

What a gorgeous place. Love the scarecrow, so different from those I see here.

No clue what that book is and I am looking forward to finding out.

That was such a beautiful house and gardens. Plus a cute picture of you little grand daughter!

What a lovely place for a day out, Bonnie always looks so happy to be out and about with you. I have no idea about the book but what a great idea, I'm looking forward to finding out what it is.

What a sumptuous house, I do love a poke around stately homes. And the scarecrow is magnificent, a work of art.

Oh, what a stunning home--both inside and out! Love little Bonnie imitating the scarecrow, too. The wrapped book with the description is something we used to do at my library and it was quite popular. I hope you enjoy whatever is inside--it sounds like my kind of story!

That certainly looks a beautiful place to visit, both the house and grounds look lovely.

I have no idea what your book might be but I'm sure you will enjoy it.

Could the book be "This is Happiness" by Niall Williams? Couldn't resist taking a guess... :) Love the idea of surprise books. And I admire the way you can delay gratification till you finish your current book! What will power!

Just found your blog via another blog and wanted to let you know that I am really enjoying it. Travel is not a possibility- we’re in lockdown in Sydney- but it was lovely to see your photos of the NT Manor. Thanks.