Did You Get Snow This Week? 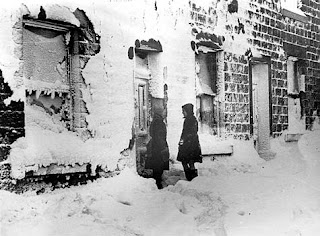 No this is not the snow we got in my area, the photos are from the winter of 1947.
From 22nd January to 17th March snow fell EVERY DAY somewhere in the UK, the temperature seldom got a degree or two above freezing, there were snow drifts 8 feet deep in some areas. Throughout January 1947 there were 46 days of sunshine & 13 days that were totally sunless, February got even worse with snow drifts reaching 12 feet in places, neither schools, shops or factories closed though. By the end of the month there was chaos, fuel was in short supply and the railways were impassible with striking workers to boot! This was all before motorways, computers & central heating, fuel was in short supply so people just kept one room heated and rationing was still here in the UK too at that time, women were queing for food for an hour at a time in this weather. By the end of the month snow or sleet had fell in the area i live in now for 19 days, hail on 9 days and there was fog on 4 days and the sun had only appeared on 2 days by February 23! the first part of March that year bought much of the same with the second half milder and very wet, the rain causing a rapid thaw and then came the floods.
The Big Freeze - 1963 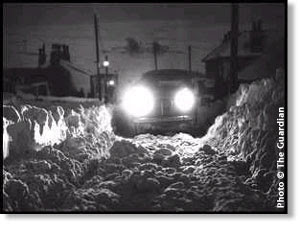 I was born in 1961 but my mother has relayed to me often about the harsh weather of 1963, it was the coldest year since 1740. Glasgow had it's first white Christmas since 1938 and from boxing day 1962 until early March 1963 most of England was continuously under the white stuff, although it was sunnier than average, unlike the winter of '47. 1947 was snowier, 1963 was colder. At Herne Bay the sea froze 2 miles out, can you believe that :-o and talking of cold, in 1684 John Evelyn took a coach to Lambeth along the FROZEN River Thames, now that's cold! (click on the link below to see a short film of Herne Bay frozen)
http://sasesearch.brighton.ac.uk/view/?from=search&fromid=placeid%3D4&film=1032&imagefile=%2Ffiles%2Ffilms%2F1032%2Fimage_a_full.jpg&imagealt=A+Still+from+%27Herne+Bay+on+Ice%27+%281963%29+showing+the+frozen+sea
Met Office - Winter Chills: 1947 & 1963, below
http://www.metoffice.gov.uk/education/secondary/students/winter.html
More photos from the winter of 1947 below
http://www.topfoto.co.uk/gallery/1947Winter/default.htm
Somehow this weeks snow seems a little insignificant, don't you think?
Keep warm...Tara-a-bit x
See you soon...... Maggie

How interesting, thanks for sharing that bit of weather history.

That sure looks a great view then. Dh just saw your pictures and he has good recollections of those view those years.

This is very interesting Maggie! My but 1947 looks and sounds like such trying times. What is interesting - I lived in Virginia (in the US) in 1963, and we also had a blizzard. I wonder if most of the world was under the same conditions? Stay warm!

Very interesting, Maggie! Thanks for sharing that little tidbit of history.

Hi Maggie, WOW, 1947 must have been an interesting year, at that time I wasn't even a twinkle in my Mother's eye.

I remember really bad weather when I was younger, and snow drifts almost as high as the garage roofs.

It has been cold here in middle Georgia, USA but we are heading for a warm spell-- they are talking 60's and 70's by the middle of the week!!

What a harsh winter!