Cookies (this is for you Gill)..and a very quick update

Gill asked if I would post the cookie recipe that I mentioned in my last post, I've got a few tried and tested recipes so I thought I'd put them on a page of their own, so I've created a separate page which you will find as a tab at the top of this page.

Unfortunately the last time I made these I forgot to take a photo, so no photo of them, next time I bake them I'll remember.

Let me know what you think if you try anything out :-)

I've had a busy week and next week looks like being just as mad so no stitching or knitting update, but I have been stitching, yes, I know It's been a while but i picked up LHN Winter Band Sampler again and in no time at all it was finished :-)  It's been whisked off to be framed and i can pick it up at the end of next week.
~~~~~~~~~~~~
We are getting ever closer to Jenny's due date and i'll soon be able to share photos of the new baby, in the meantime I'll leave you with just one more of Jenny and her partner James.  They were off to a wedding on Saturday and popped in before they went to the reception. 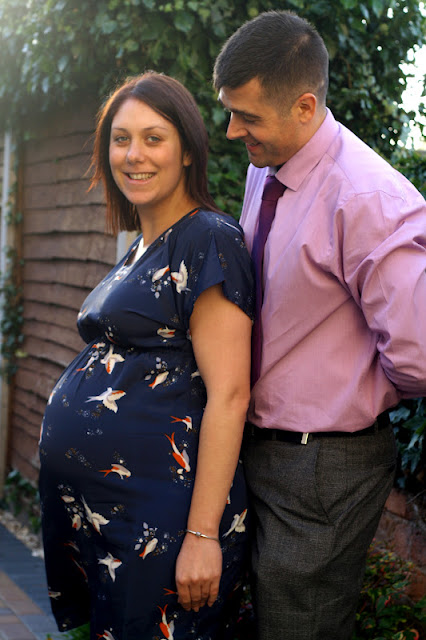 I took a few, but I particularly liked this one of them both.

Until next time x

PS. Sorry but I've had to add word verification to the comments, my in box has been just full of anonymous comments over the last few days and it's a pain!
See you soon...... Maggie

thanks for posting the recipe.

Thanks for the recipe. I will try them tonight when I get home from work as I have all the ingredients.

The excitement builds! Can't wait to see the pictures of your new grandbaby real soon!

Thanks for the recipe! I've never tried using golden syrup before... I think it is similar to an American baking product--corn syrup? I don't know. Anyway, I will have to try these, thanks!

Your daughter is the definition of glowing. :) I can't wait to hear the baby news!

What a lovely pic of your daughter. Looks like the new baby will be here soon! :)

I;ve been thinking about you all Maggie. Beautiful photograph Jenny is just glowing. Can;t wait to hear that little bundle of joy has arrived. Hugs!

Beautiful picture!! Looking forward to seeing the little one!

Fabulous picture, mum is blooming. Will be thinking of you ll, hope ll goes well with the birth. Can't wait to see your new little one.

Beautiful picture of the couple!