Thank you all so much for the lovely comments I received on my last post, they were very much appreciated :-)
The new parents are getting used to endless rounds of feeding, changing, sleepless nights and the general chaos that baby's bring.  Jenny commented that she always wondered why her friends with children said they never managed to finish a cup of coffee - now she has first hand experience of why it take so long to do even the most mundane task, including drinking coffee!

They still haven't settled on a name for the little fella, nanny is calling him TP (tiny person) for the time being  They have an appointment on November 5th to register his birth so better get their thinking caps on! 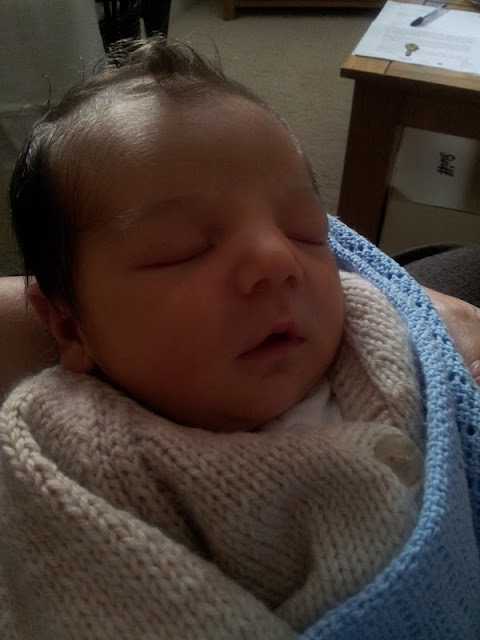 First picture with Nanny
(please ignore my double chin, it's why I don't appear in many photos, that and the fact that my nose always looks wonky!!) 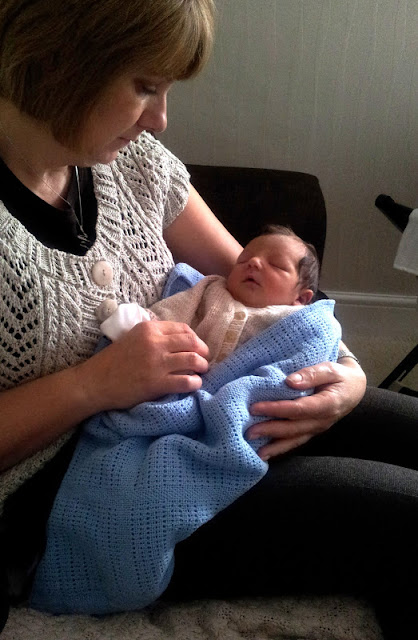 He's all snuggled up in his car seat after Granddad rocked him to sleep :-) 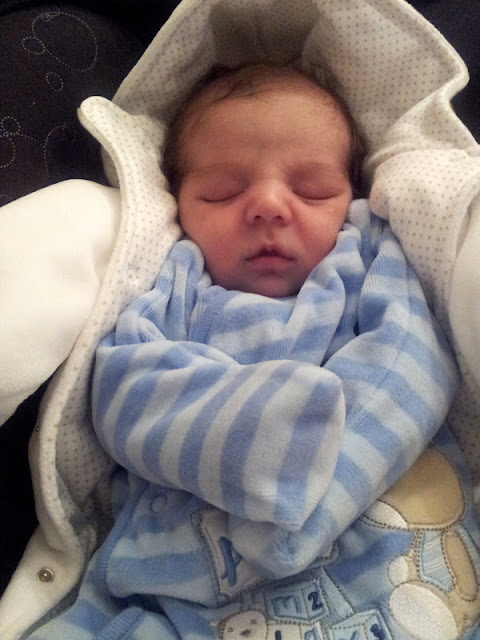 We spent the weekend of Marks birthday visiting the Cotswold's  I had booked us two nights at the White Heart Royal Hotel in Moreton in Marsh as a surprise for him, the weather was kind to us and we were able to visit Chichester on the Saturday which is a lovely town with some great shops, I even managed to find a great little yarn shop which was crammed full to bursting!  We stopped in Bourton- on-the-Water later in the afternoon for the obligatory Cream Tea :-)
As you can see the weather was really good for October. 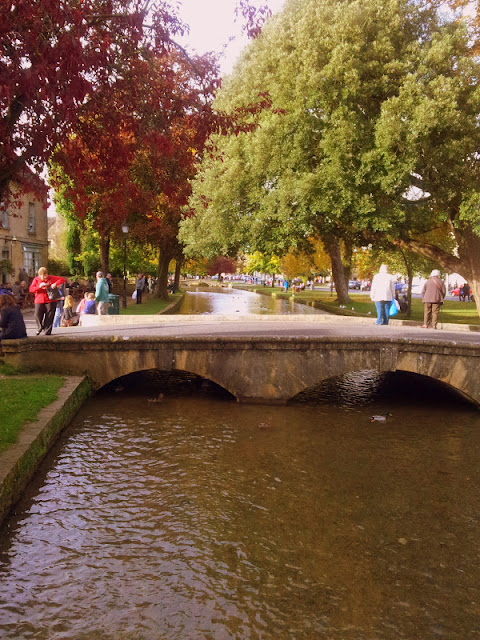 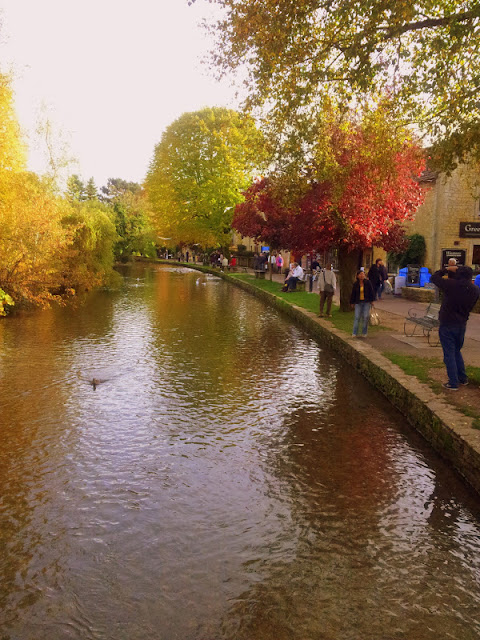 The stream is only ankle deep and in the summer they hold a fete and for a few pennies you can buy a yellow plastic duck and enter it into a race which is held later in the day when they put all the little yellow ducks in the river, if i remember right, they race them from one bridge to the other and the first past wins a prize - It's great fun for the kids and such a lovely sight to see all the yellow ducks bobbing down the stream.  They also hold a football match in the water, when i first heard about this i thought it was a joke, but no, they do actually play football in the stream!!  It's ,such a laugh because as you can imagine it is hard to run in water and to stay up right, there is lots of splashing going on too so you have to be prepared to get wet!
Sunday morning after breakfast we went to Stow-on-the-Wold where there was an Italian market selling wonderful Italian food and again some great shops for browsing.

We started for home Sunday afternoon and I'd arranged for the girls and their partners (and new baby) to meet us for lunch as another surprise for Mark, he had been in London all week so had not met his new Grandson yet!
They walked in with balloons just a few minutes after we sat down, the timing couldn't have been better!  The girls had bought him a Stig (of Top Gear fame) cake and the waitress bought it in with candles on after our meal and everyone sung Happy Birthday, most embarrassing for Mark  as he doesn't like fuss, still, i think he liked his birthday weekend,  he phoned me at work on the Monday morning and thanked me for a lovely weekend, which was nice :-) 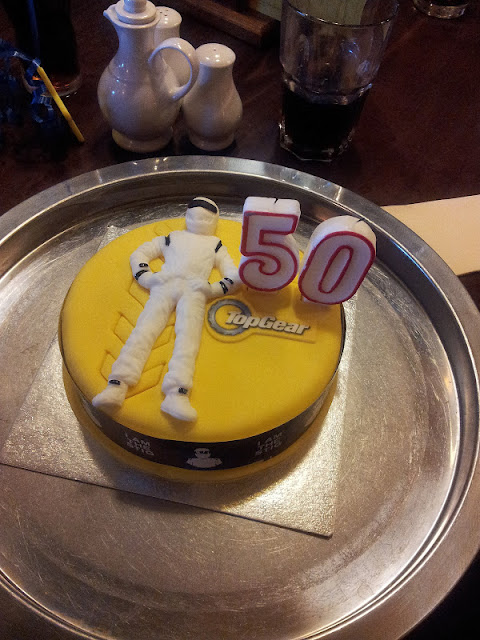 ~~~~~~~~~~~~~~~~~
I've had very little time for stitching or knitting the last couple of weeks, decorating is still at the top of my list of things to do and I'm on track to finish the majority of it by this weekend, (famous last words, i know!!)  I've been neglecting my blog reading too but i hope to get around to catch up reading later this week.

I will get a little break from the paint brush on Wednesday though because It's our monthly stitching night, so maybe some updated stitching next week to show :-)
~~~~~~~~~~~~~
If you are anywhere near storm Sandy I just want to say that I hope you stay safe and well

awwww TP is sooo cute :) hope they decide on a name for him soon ... been to Burton on the water the other year and its a pretty place :)

hope you manage to get everything done :) love mouse xxxx

I can't get over how much hair TP has? Did his mum suffer from heart burn while she was carrying him?

What a super weekend for you dh.

I think your little guy looks like an Aiden. He is a beautiful, BEAUTIFUL baby.


Love the sweater you are wearing in the picture too.

What a beautiful baby! And I think the pic of you holding him is just precious. I have that same problem with chins too ~ don't know where they pop up from in pictures!

TP is so cute! To me he looks like an Aiden. Nice strong name.

Oh Maggie, what a little doll! Oh, I can just imagine your feeling of joy right now. Enjoy every minute of it!
Your look wonderful too, BTW!
I enjoyed all of your Fall pictures, and happy birthday to Mark.
Have a great week!

That is one beautiful baby, you are very fortunate. I always enjoy your posts, you have lovely work. Keep it up!!

Your grandson is adorable!! How precious! Congrats and good luck to mum and dad with the naming.

I love Bourton- on-the-Water! I went there with my mother and my English mum and her daughter. We had a mother/daughter week renting a cottage on the edge of the beautiful village. It was paradise.

The Top Gear cake is too funny.

Aww isn't he just adorable, my nephew has the initials TP - Thomas Peter lol.
Looks a great place to visit, my Agatha Raisin nivel books are set around this area, might just have to go visit for myself sometime.

Congratulations, Grandma and love to TP!

It is in reality a nice and helpful piece of info.
I'm glad that you shared this useful info with us. Please keep us up to date like this. Thank you for sharing.

my page - discover this

You could certainly see your skills in the work you write.
The sector hopes for even more passionate writers like you who are not afraid to
say how they believe. Always go after your heart.

Feel free to surf to my blog - Full Report

The little prince is adorable! I hope the new parents will find a good name for him.