No stitching or crafting of any sort to share this week, I managed a bit of knitting but ran out of yarn so that has been put on one side until I can get to the shop.  Mostly my week has been taken up with more sorting and trying to get organised for the move.  We signed our contract on Friday and a provisional date has been set for completion on April 30th, but as our solicitor pointed out several times this is only a provisional date because our buyer's solicitor has been very elusive and no one is sure how far they have progressed with searches etc. We have everything crossed that it really won't go much beyond the end of the month, we just want to get in and settled now.

On Saturday Mark had to be at work in the Lake District and asked if I would like to go with him, it was only for the day but it would make a change and we could stay over and come back Sunday morning.  So while DH worked all day I went off shopping :-)
He dropped me off in Ulverston which is only a small place, a few nice shops, (which didn't appear to open until 10am even on Saturday's!!) and a rather nice old fashioned indoor market, which thankfully was open so I could get out of the cold!
Ulverston is the birthplace of Stan Laurel  (so Mark informed me as he dropped me off), the slimmer half of
Laurel & Hardy, I came upon the pair of them as I was walking around the town.

From there I caught the train to Barrow in Furness, not your typical English seaside town, it was more or less like most of the towns in the UK now, lots of charity shops, £ shops and others shop front's boarded up.  They did have some of the bigger store names there though and I treated myself to a new handbag (of course) and a couple of books :-)  Mid afternoon I hopped on the train again, to Grange Over Sands, this time the only shopping I did was for some food supplies for dinner, but I did have time to walk around a few of the shops and their pretty park. 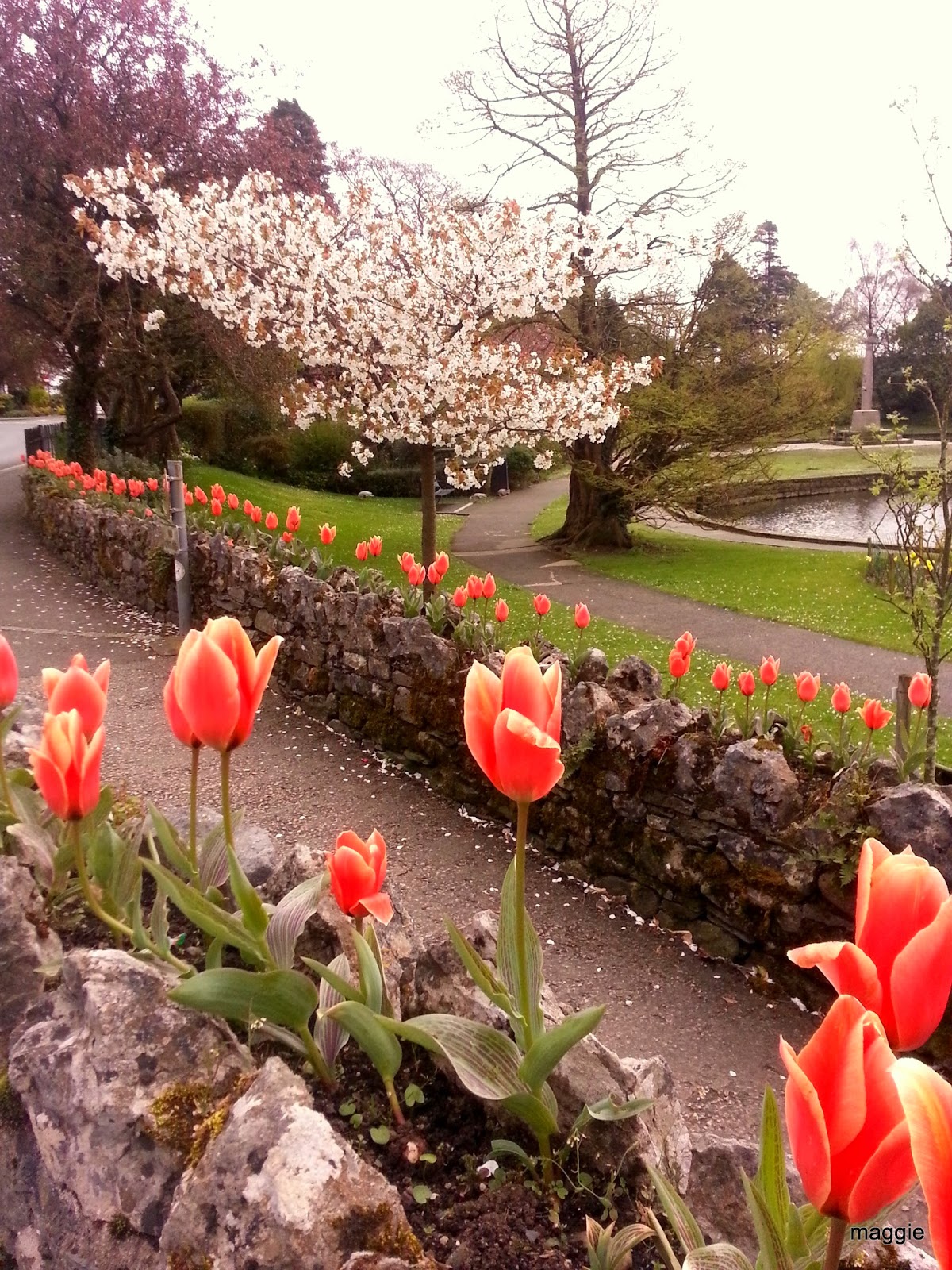 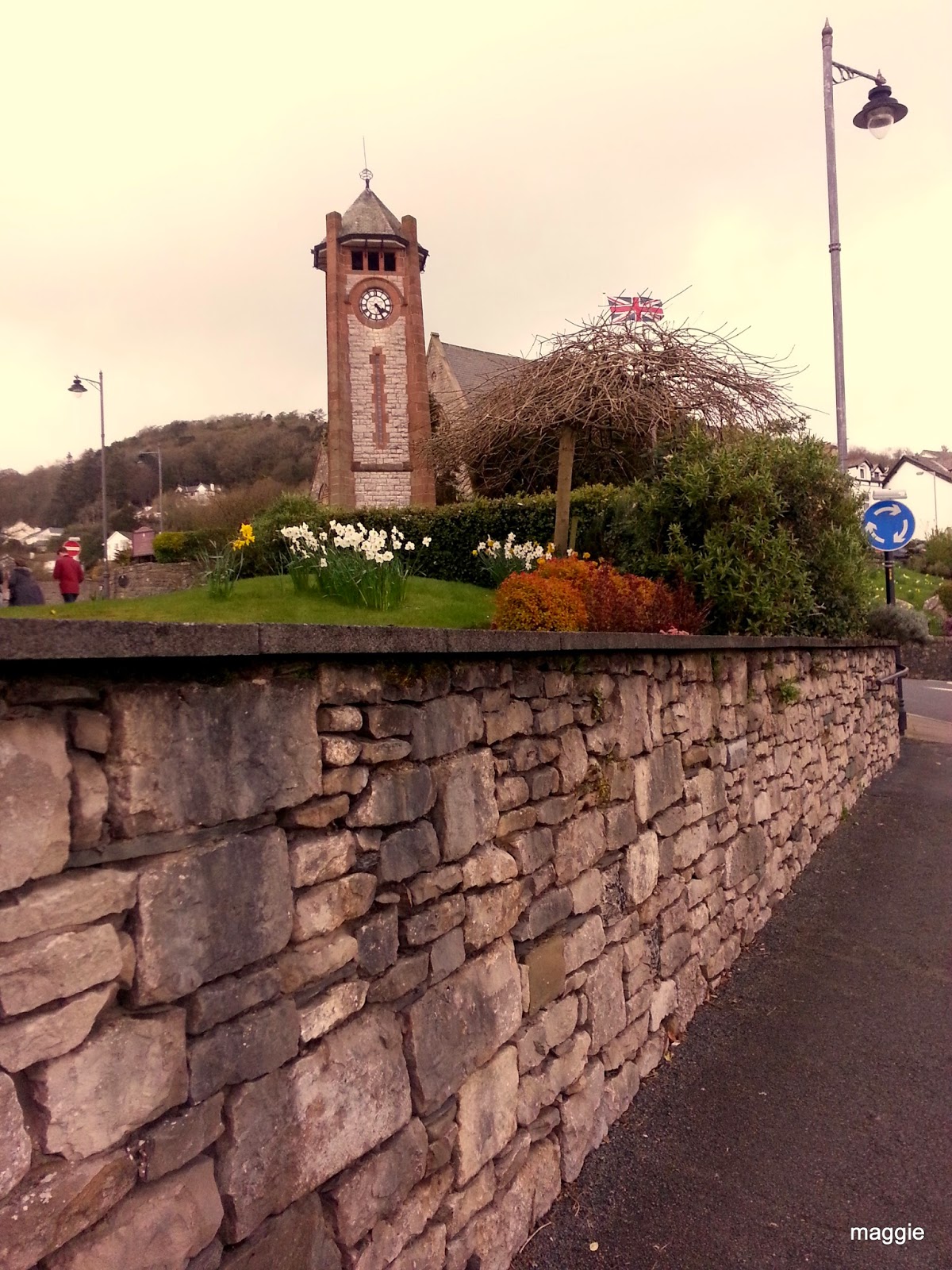 The lovely train station at Grange

The day started off quite dull, cold and windy but you can see it ended with some beautiful sunshine.

I jumped back on the train around 5.30 to go the couple of stops to Cark where Mark picked me up.  We set off early this morning to get back home before lunch time so we could have at least one day's rest before work again on Monday, It's made a very nice change but we are both shattered now!

I was going to share some of the books I've read lately, but I will save that for another post, It will give me something to share if there is no crafting going on :-)

Someone recommended Grange over Sands to new as a lovely place to visit. Great pics of your little adventure Maggie. X

We visited Grange over Sands last year - it's like taking a step back in time in some ways. Your photos took me back to the walk we did one evening.

Looks like you had a very nice day out . lovely photos
love your header hugs.

Looks like you had a lovely getaway. Your pictures are great. Loved seeing the statue of Laurel and Hardy...their shows made me laugh!

Ooh love the Lake District it's been a long time since I was in Grange Over Sands beautiful scenery, glad you had a lovey short break.

Maggie, you've taken some lovely photos! I really enjoy seeing them and imagining myself there!