Easter greeting to you all. We were predicted a very wet weekend, it did rain a little yesterday afternoon but today the sun is shining beautifully :-)
There were no chocolate eggs for the girls this year though, I decided not to buy any, mean, mean mum that I am, lol.  They did have a little something to open though, I made Jenny and Joanne a bookmark.  They both usually read books on their kindle now but just before Christmas we joined a reading group at one of our local libraries, so these will come in useful.
They were identical but I forgot to take a photo of them when they were done so this is Jenny's on last month reading group book.

Stevie is into baking cakes lately, she has had some great results for someone who never used to bake when she was at home, so her little present was this Jane Asher book.

Nanna did give in and buy the little dude a chocolate egg, just the one though.  He is quick to spot owls whenever we are out, shouting 'a owl, a owl', they do seem to be on just about everything at the moment, even Easter eggs, this one is almost to cute to eat!

Talking of the little dude, this is his latest trick, when he sees you with a camera he say's 'cheese' and screws his little face up.
bless him, we all love him to bits! 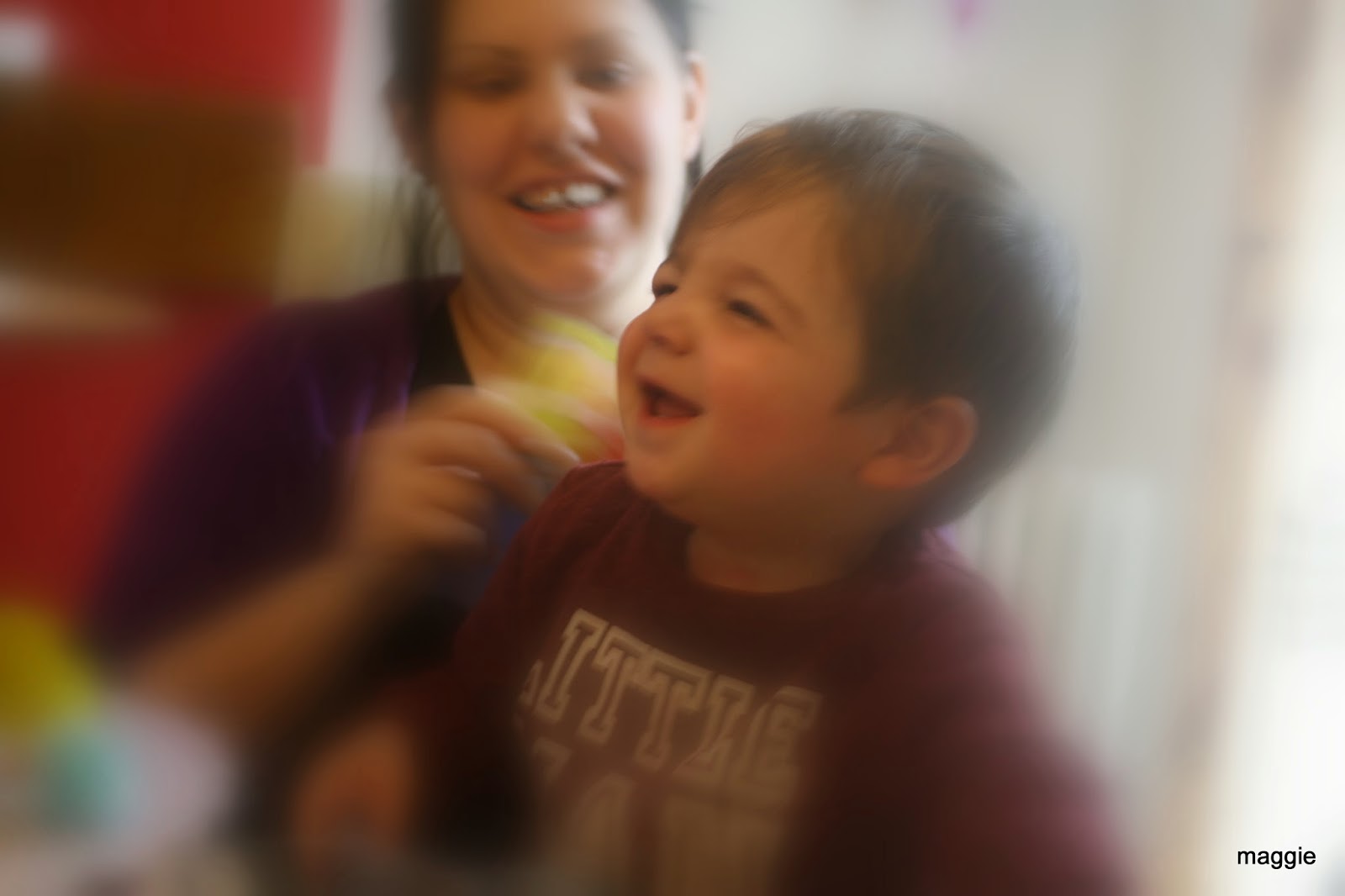 James (his dadda) arrived back safe and sound from his tour in Afghanistan this past week and is getting re-acquainted with him, 4 months is a long time when they are this small.  At least he will be at home for a few weeks now so that he can catch- up.
~~~~~~~~~~~~
And there is another celebration today as it's Stevie's birthday!
She has been at home over Easter so I've had to try and make a cake without her seeing. 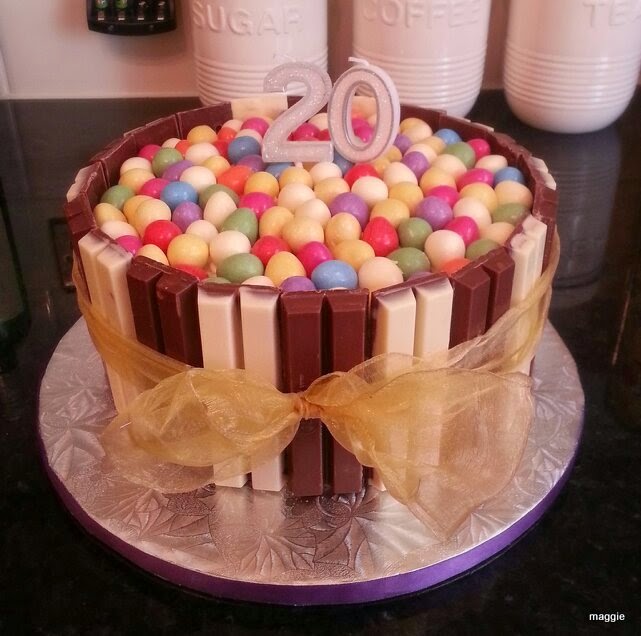 My effort was well received this morning, but as she is going back to celebrate with her uni friends tonight I guess we won't get to taste it, lol
Those are kitkat's around the edge and I underestimated how many it would take and had to run up the shop yesterday afternoon and buy another pack, which is why if you look closely you can see two white chocolate ones at the back...oops!
I searched everywhere to buy some Cadbury mini eggs to put in the centre but everywhere had sold out, we spied the last few bags just as we got to the till on Saturday but this guy in front grabbed them before I could get there...grrr so we had to make do with Smarties mini eggs instead
~~~~~~~~~~~~~~~~~~
News on the house move is at a bit of a stand still.  Someone dropped out at the beginning of the chain, and although another buyer was found the next day it has probably set us back a couple of weeks......sigh.  On the plus side, at least I get more time to pack.

That's about all the news for now, hope you all have a great week and thanks for stopping by x
Until next time
-X-
See you soon...... Maggie

What pretty bookmarks for your girls! I think they'll come in handy for sure. And that cake looks great! Very creative. Happy Birthday to your daughter!

Your grandson is such a cutie - and growing up SO fast!
I love the cake you made. I bet that was very more-ish. I love the owl egg too...I bought that one for Isaac. I have an owl obsession at the moment! :0)

Wow! What a productive week you've had. The bookmark is beautiful. Love the retro print fabric.

And that CAKE!!!! That is so pretty --- what flavor was the cake part? Did you get any?

Glad James made it home. I'm sure he is enjoying time with Little Dude, who by the way -- is beyond adorable!!!!

Happy Easter Monday. Sounds like you had a wonderful holiday.

Aww your grandson is so sweet❤️
And the cake you made is so so yummy and so cutie ..
I love the owl egg too :)
Sweet hugs x

What a lovely post! The cake looks amazing and your grandson adorable xx

Lovely bookmarks for the girls. We bought Isabelle the 'Izzy' owl egg lol, I did think of Oliver as I paid for it and wondered.if he would get one lol.
He's growing into a lovely chap, gorgeous smile he has.
Yummy cake....

I love that cake you made for your daughter's birthday. Kit Kat is one of my favourite chocolate bars although we don't get them in white chocolate here. And Smarties are a definite favourite as well though I've never had Smarties mini eggs. Sounds delicious to me. I can't stop looking at that cake!

The Easter owl is really cute. Love the mix of white and milk chocolate. Quite a dapper little dude!

And your grandson is getting to be a big boy
isn't he? What a cutie!!

I really loved your pictures of the Lake District
How wonderful to see Spring really going strong somewhere ... even if it's not here. Oh, I do
miss my trips to England!! So beautiful. Sigh!

Great bookmarks for the girls - and Nanna would have been very mean if she hadn't bought chocolate.

I love the cake - I've seen a few with KitKat round - I've done chocolate fingers round the edge before.

Your Grandson is growing fast and so cute!
hmmm...that cake sure looks yummy!
Happy Birthday to your daughter!