Some finishes & my February mantle

Hello again, I hope you survived storm Imogen without to much trouble.
Saturday was an awful day here weather wise, the rain and the wind were horrendous.
I only popped out for a few bits late Saturday afternoon, it wasn't a day to be walking about town.

The rest of Saturday I spent stitching and catching up on some missed TV programmes, mainly Endeavour and Midsomer Murders, (Midsomer for all it's prettiness must be the most dangerous place to live in England, good job it's fictional)

I see lots of people joining in with the Joyful World SAL and who can blame them, the first two patterns are so cute!
I started with February because we were already at the end of January.

My little duck looks like he's got a deformed beak doesn't he?  Unfortunately the stitching ended just by a 'snowflake' and with the yellow thread its making it look a bit strange, I'm hoping it won't be so noticeable when it's all done.

Not sure yet if I will finish it as a flat ornament or look about for a frame and change the months around.
~~~~~~~~~~
I've also finished my first Christmas ornament of 2016.
The fabric is a little darker than this photo is showing, (night-time is not a good time for taking photos). 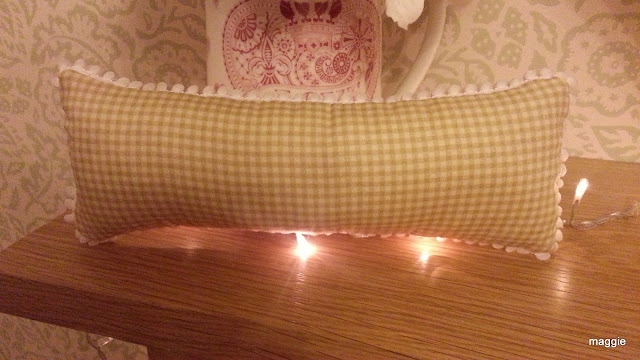 This is  a free design from 2013 offered from The Nebby Needle, which you can find here

I changed the thread colours to some that I already had.
~~~~~~~~~~
I was browsing Pinterest last week, (as you do) and came across some various ways that stitching hoops had been used, there was one in particular that featured red buttons and a heart that I particularly liked, well, I didn't have many red buttons but I did have some left over red/pink fabric from my February ornament and lots of white and opaque buttons :-) 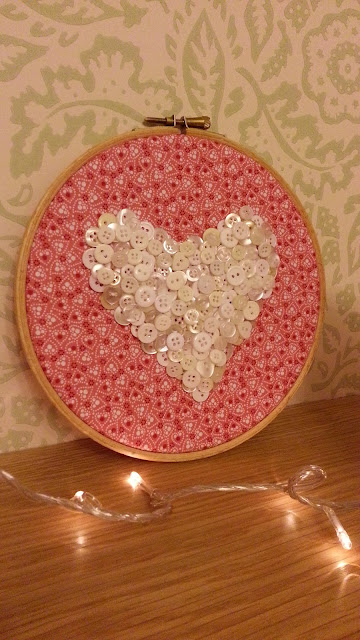 It actually came out much better than I expected, to be honest I was just going to sew on one layer of buttons but didn't arrange them too good and there was quite a bit of fabric showing between them so I just kept adding layers until I thought it looked ok.  I think it's made a nice addition to my February mantle. 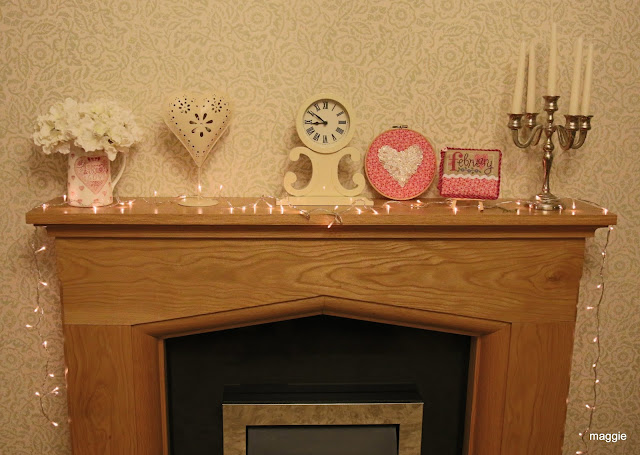 I wanted to get some pink candles but couldn't find any, so these cream ones had to do this time.  I happened to meet with this little jug in Home Sense just at the right time, don't you think it's cute, and just the right colour! 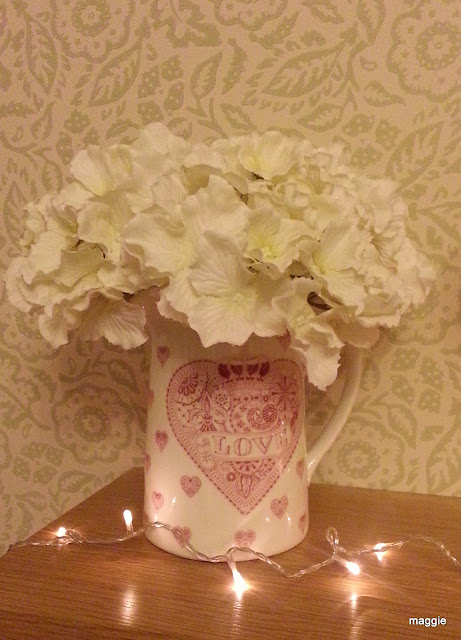 I love the pom pom trim on your Christmas ornament - it's so cute! It's such a lovely idea to change your mantle decoration every month...I look forward to seeing March's! 😉

I love both the heart in the hoop and the Christmas design. You are doing a great job finishing!

This button heart looks gorgeous, and due to the fabric it's a wonderful companion piece of the February pinkeep on your mantle.
Midsomer Murders is my favourite mystery series, unfortunately we only just got to see the ones from 2013. But I hope the remaining up to today will get aired soon as well.

What lovely things you have
Julie xxxxxxx

Oh yes! You have created a very pretty February mantle. I love your wallpaper also.

Lovely mantle piece,love your new jug,you are on a roll with al, your crafty finishes this year

The button heart in the hoop was a great idea, and I love your February mantle so pretty!

Such a pretty mantle Maggie, everything looks so soft and lovely. Your button heart is beautiful.

Your Feb. mantle is so pretty. I love the button heart. You are coming right along on the Joyful SAL.

Your mantle is lovely! I think you did a wonderful job with those buttons. Beautiful finishing and stitching too!

I love all you have showed in this post: the Christmas finish, the White heart on the mantle, the jug with the flowers and...Midsomer Murders too ;-)))
Ciao, ciao,
Miriam from Italy

Your February mantle looks super, you could always tie some pink ribbon around your candleholder to add a little pinkness.
Love your Nebby finish, thanks for the link to it.
xx

Your little February mantle is so sweet, Maggie! I'm a real sucker for a button project. :)

What a pretty mantle! Nice job on the button heart! Love Midsomer Murders.

Your Joyful World is looking lovely, I like the fabric you've used for it. I've seen a couple of those button hearts on blogs, it's such a simple idea which gives a fabulous effect and perfect for this time of year with Valentine's Day arriving shortly. Speaking of which, your new jug fits the bill nicely. Thank you for your comment on my blog, a big help to me.

Hi Maggie I've just found your lovely blog! Your mantel looks beautiful, I love everything on it. The button heart came out perfectly.

Lovely stitching. I like how you arranged everything on your mantle.