Yesterday was Mother's Day here in the UK.

I always thought that Mothering Sunday and Mother's day were one and the same, apparently not.
Mothering Sunday has it's roots in Christianity and was a celebration of the mother church, people returned to their so called mother church, the church in their area, for a service.
Years later it became a day when servants were given time off to visit families, children would pick wild flowers to give their mothers.

Mother's day as we celebrate it now began in Grafton, West Virginia, in 1908, when Anna Jarvis held a memorial for her mother.
Later, Anna didn't like the commercialisation of Mother's Day
and particularly didn't like the use of printed greetings cards.

I wonder what she would think of all the shops filled with cards and Mother's Day related items if she could see them now!

Still, after saying all that, my girls, (and Oliver) did spoil me yesterday with their lovely gifts of flowers, pandora charm, chocolates, a cute little monkey and cup (from Oliver) and some hand made presents too. 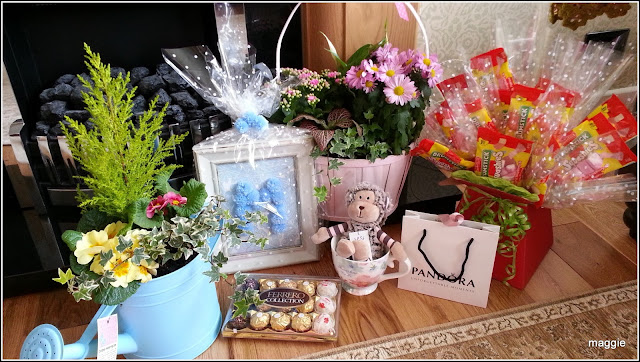 I have to show you a closer photo of what my middle daughter Joanne made me, she did a great job.

A sweetie tree of my favourites :-)
I almost don't want to dismantle it!

A letter 'M' to add to my collection 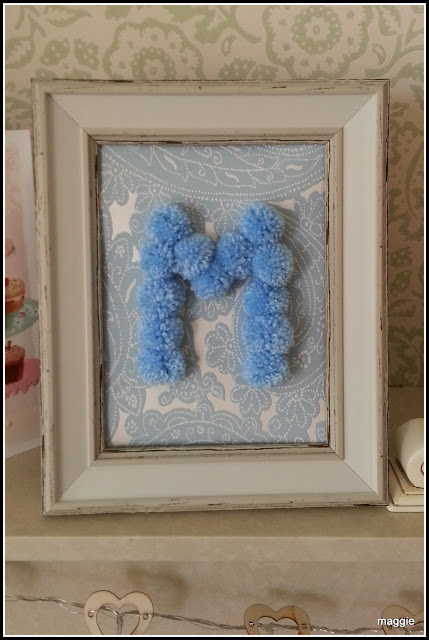 Home made carrot cake, she knows how mum likes cake!

I hope you were equally spoilt if you celebrated other's Day yesterday.
~~~~~~~~~~
I'll be back very soon with some Christmas stitching and a new start.

Such lovely gifts from your children hope you enjoyed your cake with a cup of tea and your feet up too. X

Beautiful flowers and gifts from your family , you are so loved .
Enjoy all your treats.

It looks like you had a lovely celebration, Maggie! You were showered with special gifts, from special people and rightly so! I love cake too. Literally, could eat it every day, a couple of times a day.

Lovely gifts! I'm glad you had such a happy Mother's Day!

Wow! You were thoroughly spoilt, so many wonderful gifts. I have to ask, what are Drumstick Squashies? I love Drumstick Lollies but I've never seen these before.

Ohhh...lots of gifts! Here in italy we celebrate this day the second Sunday of May.
Ciao,
Miriam

You definitely had a wonderful Mother's Day! I'm afraid the sweetie tree and cake wouldn't have lasted long. :)

Gorgeous gifts, Maggie...you are well loved! I especially love the drumstick bouquet, they are one of my favourites too! I meant to ask in your previous post, where did you get the adorable ceramic bunny? He's sooo cute!

It's nice to be spoilt on Mother's Day.

Lovely array of gifts from your girls and Oliver, well done to Joanne on the lovely handmade treats.

Thanks for your lovely comment Maggie. Just trying to catch up on everything. Hope your kitty is better now. Love your recent finishes and that hoop frame! x

What lovely gifts you received, and so many homemade ones which are extra special aren't they?
Caz xx

Lovely gifts! You are clearly loved, especially with those hand-made gifts. They are the most special!

Such a nice family you have, Maggie--enjoy your gifts!