Not a lot of crafty progress to show this week, most of my time has been spent in the garden, we have had some beautiful weather and I have managed to get some much needed tidying up done.  It's looking so much better now and should be easier to keep on top of over the summer months.

I used Lucy's tutorial, (Attic24), which I opted for after trying quite a few, I felt these were so much neater than the others I'd tried .

The only thing I did differently was to start with a magic circle.

I'm just using what Stylecraft Special I have at the moment and will decide on what colours to go with when I've done a few more. 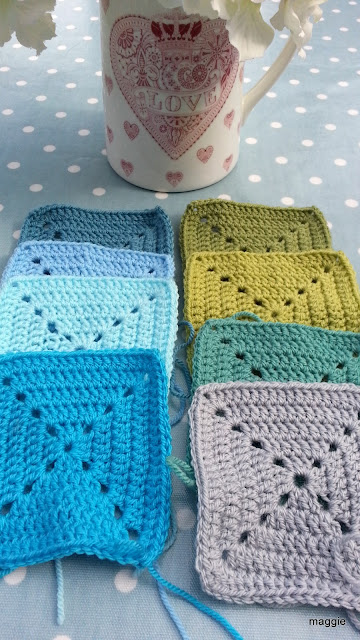 I've read such a lot of 'fluffy' stuff lately, and that's ok, there's nothing wrong with fluffy stuff , I've enjoyed a change but I'm ready for something a bit more substantial again now, and I was missing my history books.

This is the first book in his new series set during the Wars of the Roses and starts at the very beginning with the death of King Henry V.

I do have the second one on my bookshelf  too but I believe that the 3rd has already been released, so you can tell how long they have been waiting for attention! 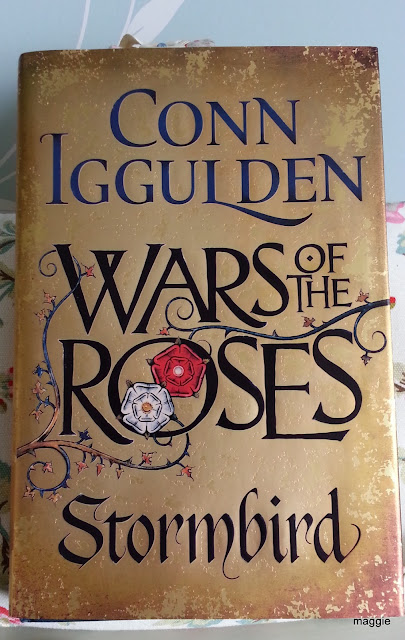 My needle....
Not a lot of work with my needle this week.  Elizabeth has really not had a lot of attention for these past couple of weeks, all I managed to add was the two little flowers.

Excuse the wrinkles and the shadows 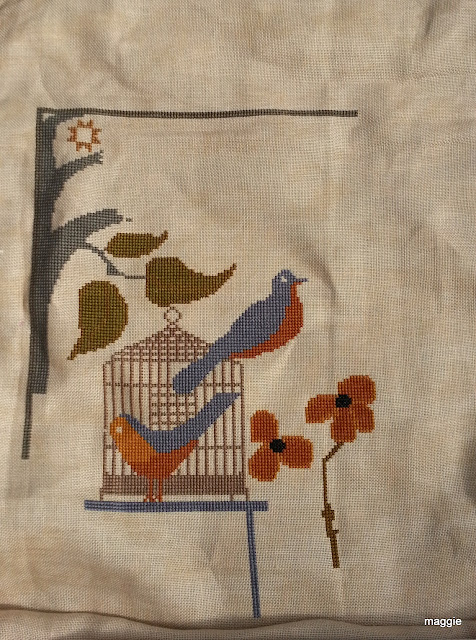 That's it for now, short and sweet again this week:-)

Just a few photos in the garden to end with.
As I mentioned earlier, the weather has been really good and there are lots of plants coming to life again, with the pieris taking centre stage at the moment with it's changing colours. 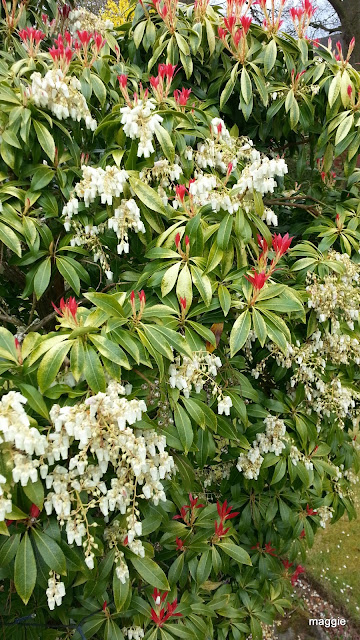 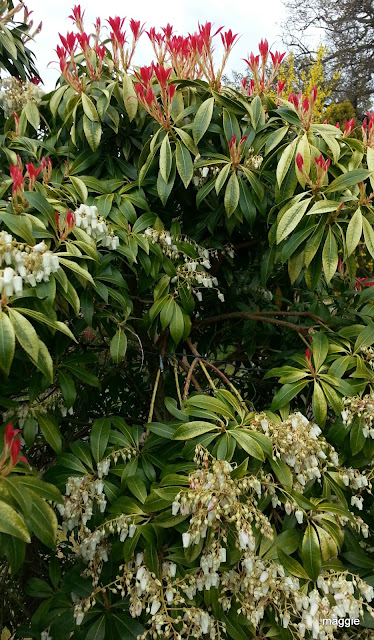 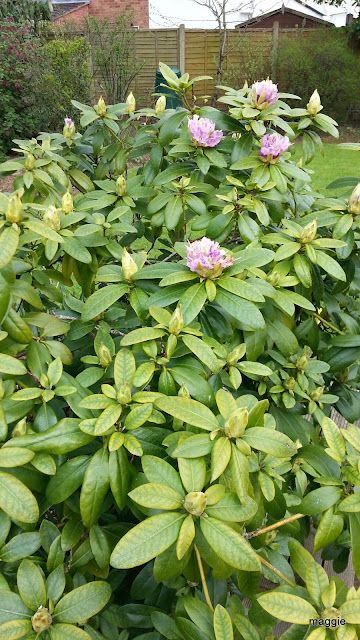 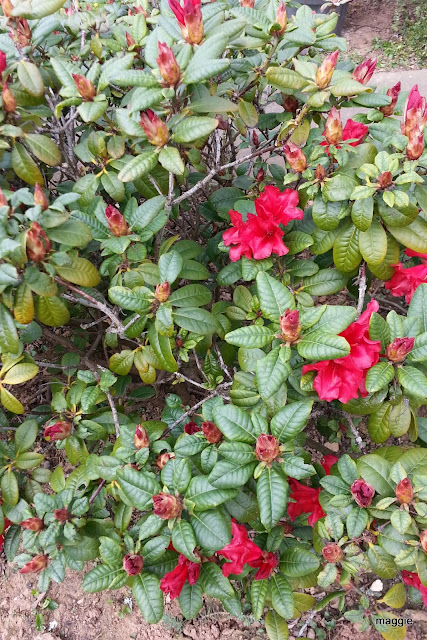 Thanks for popping by and your lovely comments, I really do appreciate them all.

Your squares are turning out beautifully! I love those shades of blue .... like a summer
sky that tapers into a stormy sky. Planning a blanket or lap rug?

I noticed Conn Iggulden's books for the first time on the shelves at the bookstore last Fall
and was intrigued. Have been planning to pick up a few to read at some point but then
.... of course .... it kept slipping my mind. You've reminded me about him again and I'm
going to go and put him on my Amazon wish list before I forget .... again!!! Love that
cover art by the way.

Well, a little bit of stitching is better then none. And if the weather is favourable for
working in the garden then that's exactly what you should do. It warmed up a lot here
for a brief few days but now we're back below season temperatures. Phil spent the
beginning of the week puttering all day long in the garden and did his first mow of the
front yard on Friday so he's happy. The grass is pretty much green here and the
daffodils are blooming but that's as far as we've got. Bushes are budding though and
so are some of the trees, so we're getting there. Slowly. It's going to be cool again
this week with temperatures dancing around the freezing mark at night. We won't be
able to plant our annuals etc until the May 24 weekend ... just to be safe.

And your garden is so lovely Maggie. I can't wait to see such colour again here. Sigh!!

The bird stitching project looks lovely!!It really is garden time. If it weren't for the darkness, I would get very little stitching finished. Today I worked on the plan for my flower box outside the kitchen window.

Love the colours of your crochet squares
Julie xxxxx

Short and sweet and all very lovely!
Enjoy your garden & have a great week,

Nice assortment of crochet squares.
Enjoy your book, perhaps the sun will come out a bit more so you can enjoy a read in the garden amongst your lovely shrubs.
xx

Your crochet squares are lovely, I've never made a solid granny square but I like the look of them so I must give them a go. I tend to read what you call fluffy stuff, I find it quite difficult to get in to a more substantial book but I do like history so perhaps I should try this genre. Your pieris is looking fabulous, it's something I've never grown myself but they're really lovely plants with lots of interest.

Your hook, book, needle and garden are all lovely :)

Your garden photos are lovely, Maggie--you must be warmer than we are as our rhododendrons won't bloom for another month. Your crocheting and stitching look great--hard to find time for crafting at this busy time of year :)

Pretty granny squares! I will have to look up magic circle. Sounds like you have some interesting reading planned. And sometimes that is how a stitching piece grows - little by little. : ) Looking pretty! You sure have some gorgeous blooms in your yard!

Fantastic to see these pictures from your garden.
Nice progress on all your projects, Maggie.

Your crochet squares are as colourful as your crochet flowers. I have the same novel in my 'to read' list. I have heard that it is very good.

Lovely work on your squares and your stitching! Your garden is beautiful! The weather here hasn't been great for gardening yet and the few things we have placed in the ground haven't done too well. Enjoy your book!

Hi. I've just found your blog. It's good to find a blogger in the West Midlands. I too was recommended Angela Marsons by the librarian at my local library. It is surreal to see local roads and places mentioned in a book. I like your solid squares and look forward to see what you make them into. (I have a cat just like your black and white cat, her name is Millie!) Alison

Your garden looks gorgeous! It must be so rewarding to work out there and see such beautiful flowers. Lovely crochet and stitching too! :D