A nasty finger and a new kitchen

I had just got used to posting on a Sunday and then it all went pear-shaped.

Mum was admitted to hospital last Wednesday after an x-ray on her  index finger revealed a bad infection which had gone to the bone.

She had been treated at her doctors surgery every week for the previous 6 weeks but the nurse recommended an x-ray this last time because it looked as though it had started to spread.

She ended up at the Queen Elizabeth Hospital, in Birmingham and they have taken biopsy's and cleaned it up under local anaesthetic.  The bone specialist she saw there was lovely and treated mums case as an emergency and did the treatment the following day.  At least two doctors that mum has seen at two different hospitals have said that her GP should have sent her long before it got this far, one even went so far as to say it was neglect on her GP's part.

We have no idea what mum did to her finger , she says she can't remember doing anything, but some germs must have found their way into a small cut or under her nail bed somehow.  Her nail came off and the skin on the top of her finger had just peeled away.  It didn't look pretty I can tell you!

I took her yesterday to have the dressing changed, it looked better but not closed up and i'm sure I could still see bone! (I took a photo to compare next week when I take her again).  We won't know what the infection was until her appointment on June 12th.

I'm not going to put a photo on this page because truly, it is not nice, if you have a strong stomach and are NOT eating go and have a look in the tab at the top of this page if you want too.  But don't say I didn't warn you!!!!!

So, I've been running backwards and forwards every tea time to mums to get her tea and put something up for her supper and lunch the next day and help get her tablets sorted, (it's her right hand which is making it difficult to handle things, plus, she has arthritis so it's very awkward for her).  My youngest sister has been going up to wash her, she can't get the bandage wet at all so even though mum hates the thought of her daughter doing something so personal for her she has no choice at the moment.
It is best that I don't dwell on what my eldest sister has contributed to the help else I might start to rant, all I'm going to say is when she goes up she thinks it's more of a social visit and just sits and talks, about nothing really, gossip.  She's a talker i'm a doer, before she has finished telling everyone what she is going to do, it's done.  I can't be doing with it, so i'm avoiding her if I can because I don't want a falling out, and anyway she has an answer for everything and can't see she is doing anything wrong, it's just so frustrating.  See, i'm starting to rant!

I've still been going to work and I've also had Oliver twice overnight this week so as you can imagine I'm shattered.  I got back in home at 5.30pm yesterday after the hospital trip and sorting mum out, had my tea and a bath and was in bed by 8pm.  I just hadn't got the energy for anything else.

On a happier note, my kitchen is finished, Yayyyy.  We still have to decide on a blind and order a splash-back , I'm hoping we will find time to do that soon.  Of course having the kitchen done meant there were boxes to sort and things to put away and I've almost  got that all done now.
The next big thing is Mark starting work on converting part of the garage into a shower room come laundry.  Although I will be able to shut the door on that while it's being done so it shouldn't cause too much disruption to the rest of the house, (she says hopefully). 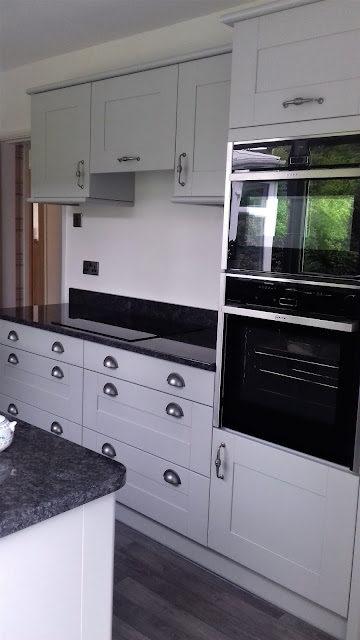 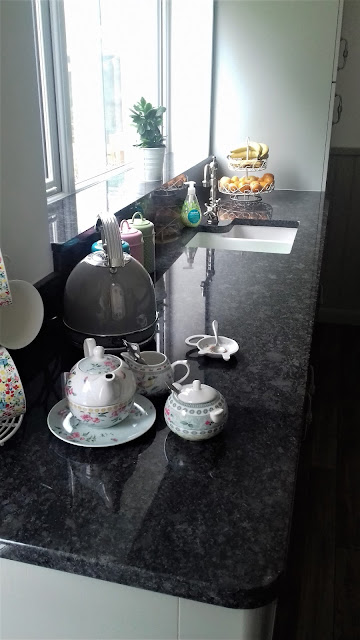 I'm really happy with what we chose, our kitchen is not very big as you can see and the previous owner had not made the best use of the space to be honest.  We have opened the doorway back up into the garage (this is where the shower room come laundry will be), you would think that this would make the space smaller but it has had the opposite effect, everyone has said how it feels much bigger and brighter.
I think there is a temptation with a small kitchen to fill all the available space with cupboards, but in my opinion that just closes the space in.  We have a larder unit for all food stuff and opted for deep drawers for pots, pans plates etc.  I love the drawers, it was one of our better ideas :-) 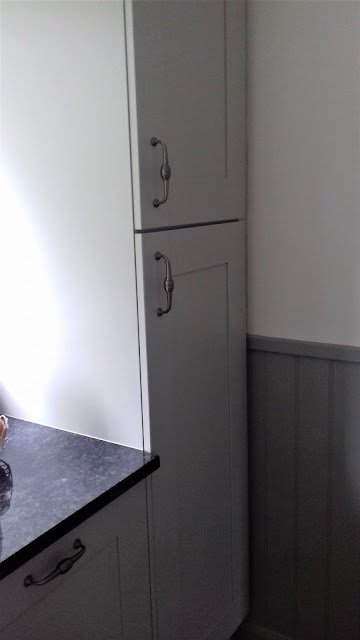 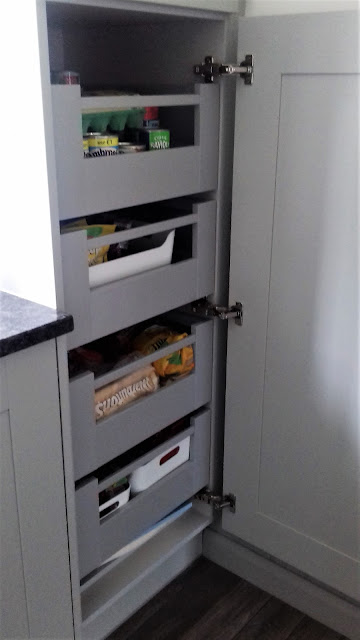 All my kitchen gadgets and baking tins i'm keeping in the pantry under the stairs.
It was an opportunity to have a good clear out and get rid of all those things you keep but never use, or all the duplicate things, I had 3 large mixing bowls, why I would need 3 large mixing bowls I have no idea!  Now I have one, the one I used to use all the time anyway :-)

The appliance that both me and Mark are loving having again is the dishwasher.  For almost three years we have been without one and it's soooo good to have one again.  It's lovely to walk into a clear kitchen :-)

The weather has been pretty miserable the last few days, from pottering around the garden last week though I will say that the ground needed a good soaking, we just don't want it all summer do we.

I'll try and make some time next week to share that little baby cardigan I'd started last time, it came out so sweet, i'm really pleased with it :-)  Tomorrow I'm having a day out with Joanne at the Baby Show in Birmingham, i'm sure we will come back with lots of lovely goodies :-)

Oh Maggie, I am so sorry about your mum's finger. I do so hope this heals quickly and well. I am praying. Your kitchen is beautiful.

Sorry to hear about your Mum. Hope she's better soon. Don't get me on the subject of siblings! I've had my Mother living with me 25 years and nor once have any of the three siblings offered any form of help. I'm tired and now she is quite dependent feel shackled. But I love her and wouldn't leave her. Still won't rant:-)

Oh my goodness, what was your mum's GP thinking of letting her finger get to that state. I haven't looked at the photo, I don't have a particularly strong stomach, but it sounds really nasty, it must be so awkward for her with it being her right hand. I hope they get it sorted out for her soon. Your kitchen is fabulous, I love the units you chose. You definitely get used to having a dishwasher, I remember ours breaking a while back and we didn't replace it straight away, I was so glad when we eventually got a new one. Enjoy your day out with Joanne, you deserve some time to enjoy yourself.

Your poor mums finger, what was the GP thinking, at least it's getting sorted now. I love the pictures of your kitchen, I dream of a new kitchen (set out properly), you've chosen a lovely colour scheme xx

I'm so sorry to hear about the finger and hope your poor mom will be much better soon. I also know how she must feel. When I broke my back, my poor DH had to do everything. It is hard for an independent person to so depend on others for everything. In families, there always seems to be one responsible one and you are it. Take care. At least, you have a lovely kitchen!!

Sorry to hear about your mum, hope all gets better soon.

I hope your mum is feeling better soon, it's always a worry when your parents are unwell. Love your kitchen, the drawers in the tall cupboard are brilliant. How quick we go from needing rain- to please let it stop.

I hope your mum continues to heal and feels better soon. I am an only child, and after watching how other families function (one child does everything and the others complain about how much they are doing) I am very happy to be an only child. Yes, all the responsibilities were mine, but I didn't have the frustration that you are feeling. You are lucky that your younger sister is helping! Your kitchen looks wonderful. I know how fun a new clean functional kitchen can make a person, so enjoy!

Your kitchen is so beautiful ..please give my love to your mom
Big hugs x

Families, sisters, complicated, frustrating, two individuals who are unable to understand or articulate the expectations of the other

Oh my, you had a busy busy time! Please wish your mom a quick and good recovery! And I hope you will have time to relax a bit more now .... no not a bit but a lot!!!
Your kirchen is beautiful, enjoy! I love the colours, so calming. Enjoy!

Relax-hugs across the pond, Carolien

I peeked at the pic ... ewwwww its really nasty. Poor mum, that must have been so painful for her to endure.
Nice spanking new kitchen!

Oh, your poor mum. GPs can be so hit-and-miss, can't they? I've seen some incredible GPs...and also some dreadful ones. I hope your mum is feeling better soon.
Wow, your kitchen! It's gorgeous! I bet you don't want to use it. Keep it looking brand new forevermore! Lol.

Your poor Mum, that must be so painful for her. Difficult too to accept help from her daughters, but needs must. Your new kitchen looks fabulous - did ours last year, oh the upheaval it caused! It made me have a good sort out though.

I hope your mother's finger has mended, Maggie.
Love your new kitchen and I think the drawers are a great idea. I haven't seen them before. It looks as if you made very good use of your space.