Hello! I really haven't been very consistent with this blogging thingy this year have I.

But I'ts one of those things that if you leave too long it's hard to come back because the amount of stuff to say becomes overwhelming, so I won't bombard you with lots of things today, just a few snippets from the month of March.

The March weather was a bit up and down here in the UK, we had wind, rain, The Beast From The East, (and his little brother, the Mini Beast) which dumped two lots of snow on us.  My garden has still not recovered from all that and the last two days have been more like Autumn days, misty, dull and rainy, I hear we are promised better weather next week, I hope so because I've had enough of rain!
My mood was pretty much like the weather too.  I came down with a sickness bug which put me in bed for two days and it was a full week before I felt better, then the blood tests I had came back showing I was deficient in vitamin D -  well that probably goes some way to explaining why I was feeling so low!  This week I feel like I've turned a corner, not completely there, but better than I was.

We are still eagerly awaiting the new addition.  Jenny's due date was Monday, so any day now we will have a third grandchild :)

I've knitted four new cardigans but forgot to take photos of two of them, they were just plain white ones though, these are the other two. 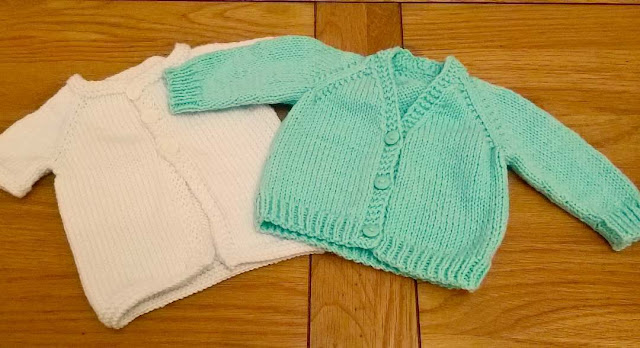 I finished my ornament for March, well the stitching was completed in March but I didn't get around to making it up until March was out, (oops). 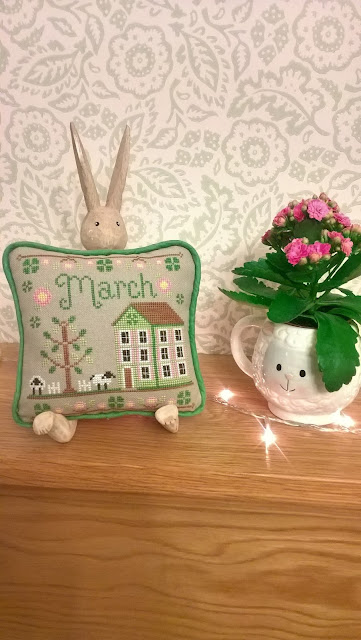 (Please excuse the pictures, they were taken at night and the light is making the fabric come out green, it's not)

We threw a little Sprinkle Baby Shower for Jenny and I made another nappy cake. 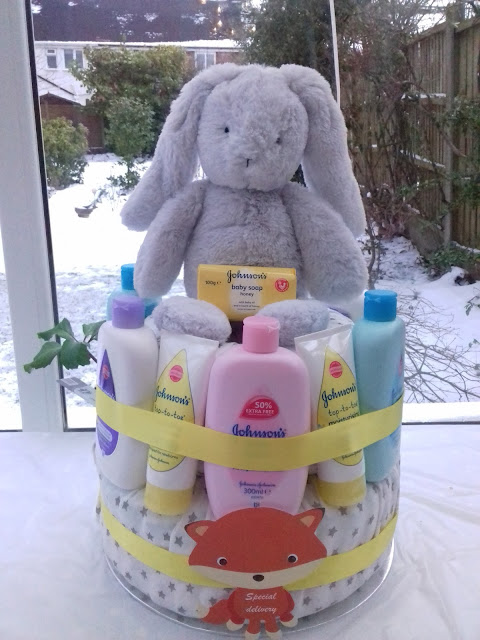 As you can see we had snow that day so unfortunately a few of people didn't make it, but those that did had a good time, I think.

I also went to Great Yarmouth with Joanne and Bonnie for a week, we had a couple of good days when the sun shone even if it was biting cold and we managed a walk along the sea font and despite the cold we managed to find a shop open on the beach front and had ourselves an ice cream, although it was so cold we sat in the car to eat them, lol 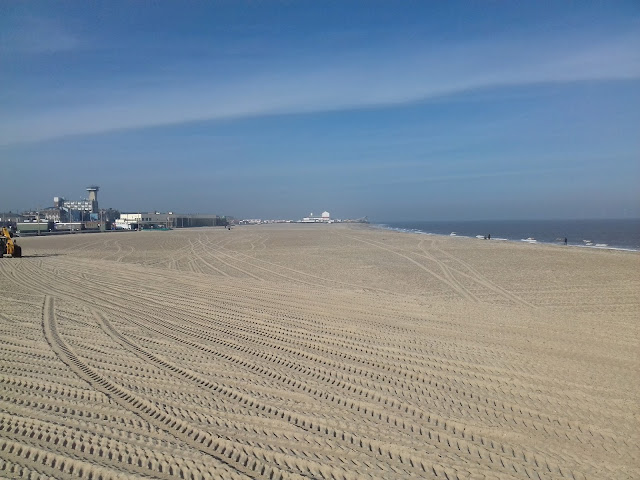 Here's Bonnie's first encounter with the children's camp site characters :-)
She wasn't in the least big fazed by the giant frog and duck that appeared at breakfast, just bemused, lol 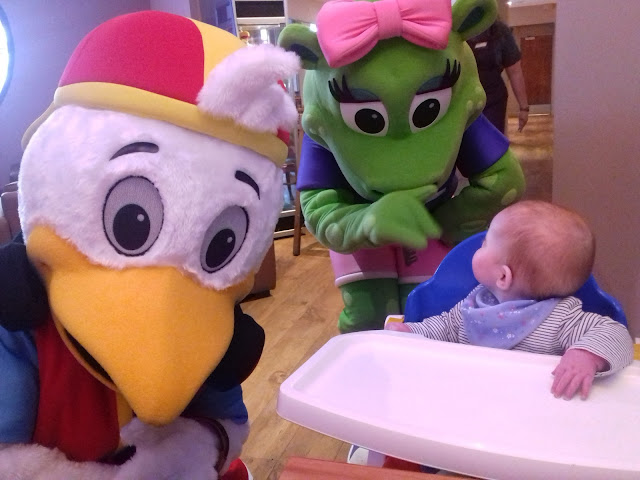 March was also the month that our youngest daughter, Stevie-Leigh became all grown up by being a house owner, with a mortgage and everything, lol.
We still can't quite believe it because in my head Stevie is still about 13 years old, although in reality she will be 24 next week, lol.

Everything went through just before Easter and She and her boyfriend, Darren got the keys the day before Good Friday but they are not moving in just yet as there is quite a bit to do in terms of cleaning and decorating, which means Mark is now spending his weekend time DIYing either at Joanne's or Stevie's house, so in the meantime his list of jobs to do at home is getting longer :-)

I noticed that I have a few new followers, (waves), which is lovely, do stop and say 'hello' because blogger won't let me click on names in the followers box anymore so I have no idea if you have a blog I can visit or not unless you leave a comment.

That's it for this long overdue post, I'm going to get an early night just in case I get a phone call from Jenny in the middle of the night :-)

Lovely knitted items ready for new baby, they look tiny and perfect. Our day was duller than yesterday but I still found myself in our garden. We have everything crossed for the weather to be good next week.

Congratulations on the coming baby. I don't think I could ever have too many grand children. The little sweaters are wonderful. Good luck to the new home owner. Our DD is contemplating the same thing.

Lovely post , Love your new finish.
Hope you are feeling better .
Looks Like you are very busy .
I tried to send you an email but it would not except it.
You wanted to know the name of the rabbit chart , it was from the Britter cup designs if this helps.
Have a lovely week.

You're posts are always full of lovely things and so many things to comment on. First of all I hope you're feeling better now. It's really no wonder that so many people are deficient in vitamin D given the lack of sunshine. Hopefully the warmer temperatures forecast next week will mean that we see the big yellow thing in the sky again. Your March ornament is lovely and I love the little bunny holder, that's so cute, and I love the sheepy mug holding your plant too. We had a day in Great Yarmouth last year when we were staying in Norfolk but it really wasn't the best day then either, rainy and cold, so we definitely didn't see it at its best, but it does look a lovely place. We loved the beaches in Norfolk and it's somewhere we'd definitely like to visit again. Wishing Stevie-Leigh many years of happiness in her new home and fingers crossed for a short labour for Jenny, exciting times for you at the moment.

Hope all goes well for Jenny and the new addition. Pretty cardigans you have knitted.
Love the March ornament, what a great trim you have on it.
I know so many ladies 'our age' that have recently been diagnosed as vitamin D deficient and they thought it was their age! hope you are soon feeling much brighter with more energy - you'll need it with 3 grandchildren lol.
xx

Hi Maggie hope you are feeling better ,congrats on having a new little GC in the near future,nothing better than being a Grandma,your work is beautiful ,hope your day is a good one my friend xx

How exciting, your third grandchild! You made the loveliest cardigans, I look forward to pictures ;)

All the best and oh yes, the finish is so nice! Love the sheep :)

Congrats grandma. Love your work & the bunny holder holding your cross stitch. Love England miss it so much, best friends are from there.