Just a bit of this and that chitchat

Many people say it, and we all know that time passes, but seriously, where does all that time go?
It's not that I've been any busier than normal really, just more of the same old same old but yet another month has flown by in the blink of an eye.

And talking of time whizzing by, can you believe that it will be Bonnie's 1st birthday in just over a week?

I just love this photo of Joanne and Bonnie, she is definitely mummy's little mini me :-)
(And Joanne looks so young, you wouldn't believe she was 30 last year would you!) 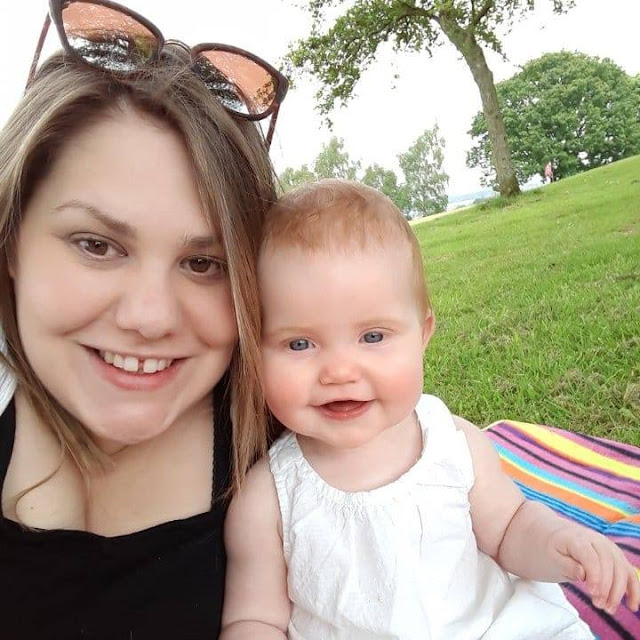 Joanne has just gone back to work 2 days a week, so now I have Bonnie on Tuesday and Wednesday afternoons.  She goes to nursery in the morning and as it's literally next door to my office, (or as Google informs me, 167 feet), I collect her just after 8am and drop her at nursery and collect her when I finish work at 1.30.  Joanne's work is in the opposite direction so it makes sense for me to take her and they only live around the corner from us so it's all worked out ok.

I've been taking Bonnie back to her own house on those two afternoons just because it's easier while she is still small, her toys are there and if she has a nap I can put her in her cot, (I did that yesterday and she slept for tow hours!).  Joanne has very kindly been providing me with my tea so at least I haven't had to mess about with cooking for one when I get back home, fair exchange i'd say :-)
~~~~~~~~~~~~~~~~~
Marlene http://poppypatchwork.blogspot had a give away on her blog a few weeks ago and as I was the only one who actually said they wanted to be entered I won by default, lol.
I'm sort of glad no one else was in the running because look at all these seeds she sent me 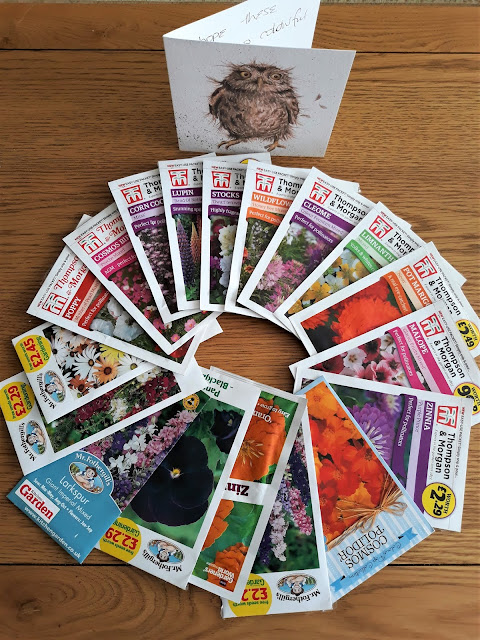 I'm going to be sharing some of them with Joanne as she is planning on getting their garden done next year, so we should both have very colourful displays.  Thank you again Marlene :-)

Marlene has also been sharing photos of her houseplants recently, like me she has a spider plant which is producing lots of little ones. 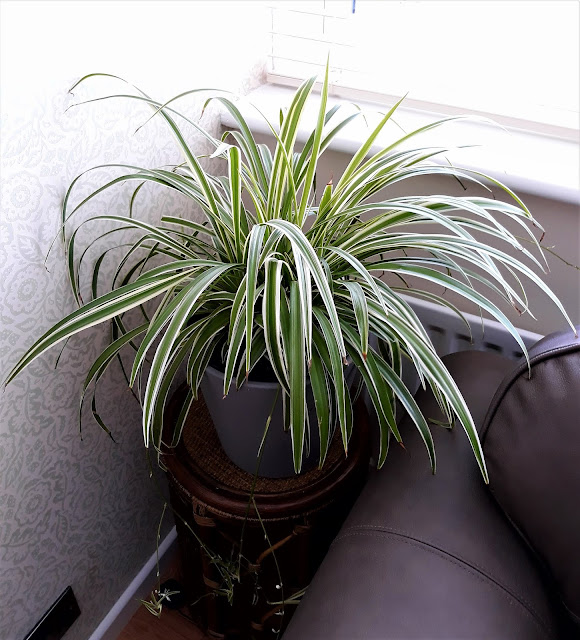 My sister bought this for me when she was getting one for herself, I can't remember if it was last year or the year before but anyway it's done really well and is way bigger now than my sisters plant.

I've given some of the little plantlets away but have more again now and some of them are even producing plantlets of their own, so you could say my spider plant is a granny, lol 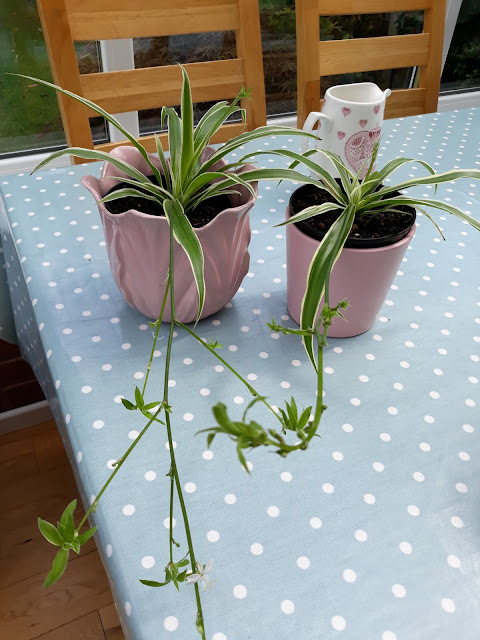 Marlene has been taking her baby plants to the charity shop, I never thought of doing that before but as I have quite a few this time I might do that once they are more established.

I've only got another couple of house plants, an Ivy, which I have had for ages (and needs re-potting),
and also a smaller one which came from a little bit that was broken off  the larger one. 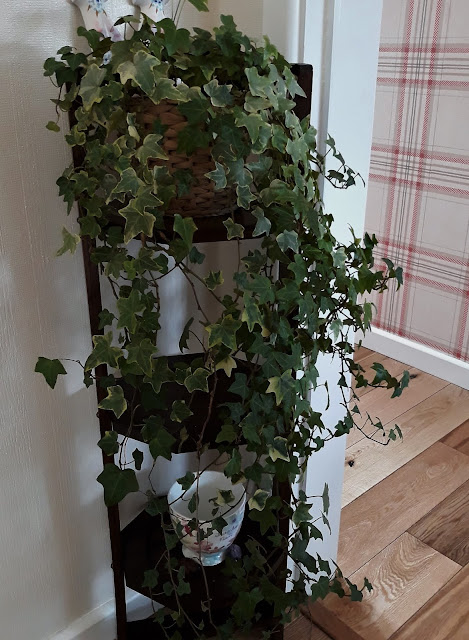 Strange how this one is more variegated than the other. 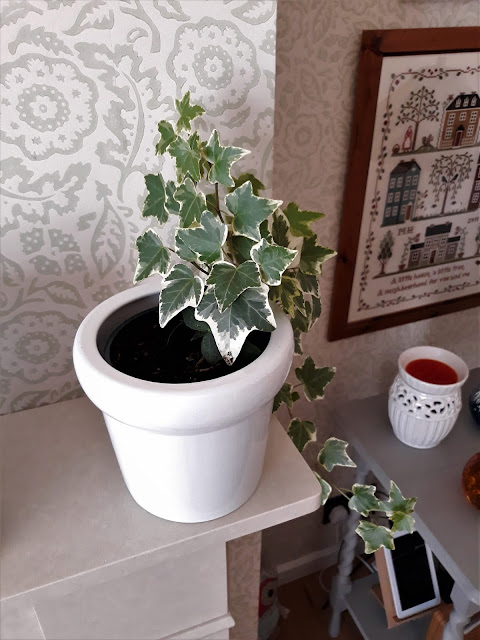 I have no idea what this plant is, when I picked it up in Ikea I thought it was plastic and was surprised to find soil in the pot.  It's been sitting on my kitchen window ever since, it seems to like it there so i'm reluctant to move it. 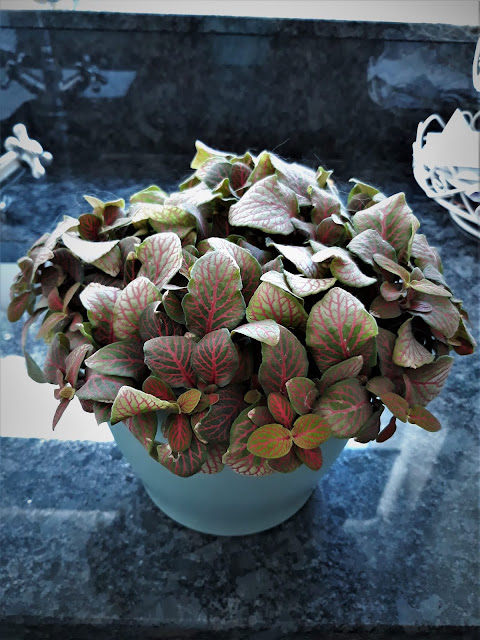 House plants seem to have fallen out of favour with the younger generation, of my three daughters only Joanne has any, the other two always say that they can't keep them alive, although I have to say I don't pay any special attention to mine, they seem to thrive better the less notice I take.
~~~~~~~~~~~~~~~~~~
My reading is still not what it was at the beginning of the year, I keep looking but everything out there looks more or less the same lately.  I activated my Kindle Unlimited again last month and got Anna by Amanda Prowse.  I know I've been very critical of some of her books in the past, I had one on audible some time ago and she was reading it and in my opinion she should just stick to writing, she just doesn't have the kind of voice to make a story come alive or even interesting. 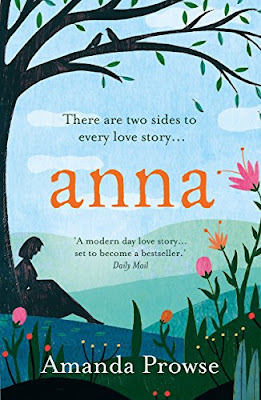 Anyway, Anna was a really really good book, I thoroughly enjoyed reading it, it's still available for free on Kindle Unlimited at the moment.  There is a sequel to the book, Theo where we get to hear his side of the story, I haven't read this one yet, I just picked it up from the library this afternoon.

Rather than writing a review I've linked both titles back to Amazon.  Let me know what you think if you read or have read them.
~~~~~~~~~~~~~~~~~~~~
I've been doing some knitting, some crochet and some stitching too but unfortunately no photos because I haven't got round to taking any.  To be honest the only finish is the crochet one and I wanted to take a photo of that in it's setting.  I would be showing 'in progress' photos of everything else so hopefully there will at least be a couple of finishes in August.

Talking of stitching, some of you may know that for the last six or maybe seven years I have been running a monthly cross stitch group at a local community centre.  I've been thinking for a while now that I would like to step down from that and so made a definite decision last month to do just that. One of the other ladies has kindly offered to step in and take over, so it will carry on, we have a lovely group of ladies, some of  them have been coming since the very first meeting so i'm glad it will continue.  I feel I made the right choice, what with all my other commitments I just didn't one more thing to be responsible for, I will continue to go and stitch with them when I can, but now I won't be obliged to go if I've had a busy week.
Two of the ladies, Karen and Annabelle bought me a lovely bunch of flowers and a card just to say thank you, which was a lovely kind gesture. 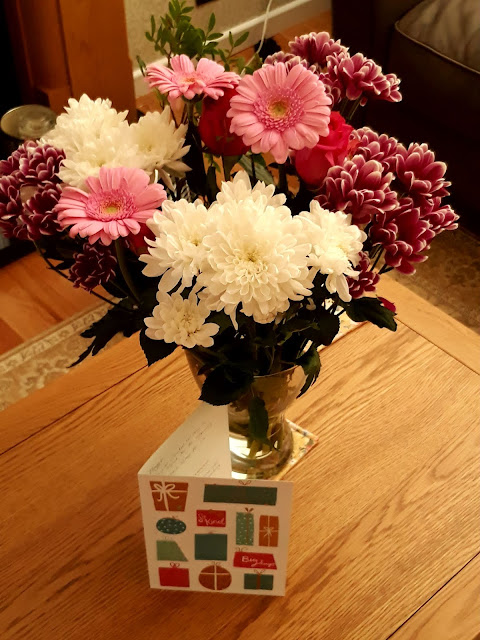 We are going on holiday on Saturday and taking Oliver with us.  It will give Jenny a break as she has had the two of them on her own for the last couple of months while James is stationed abroad.  He will be back the week after we come home and I think Jenny will be extra glad to see him!

We are staying at Trevorrick Farm in Padstow, we thought it would be more interesting for Oliver as there are loads of animals and things for the kids to do.  It's been ages since we've had a holiday in the UK, I'm really looking forward to it, we have several things planned to do in the week, including a visit to the Eden Project which I'm sure Oliver is going to love.  Fingers crossed the weather will hold out for us.

I think that's about it for my bit's and pieces catch-up.  Depending on time I might try and do a blog post every day while we are away, I've seen how some bloggers have their posts printed into books and I think this might be nice to do for Oliver as a memento of his holiday with us.  If I do though they will just be a quick post on what we got up to on that particular day, but i'll see how shattered I am at the end of each day, this is not going to be a relaxing put your feet up and read a book holiday :-)

And on that note I shall sign off and say see you soon.

Glad you like the seeds, I still gave more here which I will use next year. Turning your blog into a book is fun, your words bring the photo to life. The first time we had our grandson Logan to stay without mummy and daddy we took loads of photos and made a book to surprise them, which they loved. I'm reading Amanda Prowse at the mo.

What a lovely chatty post. It's amazing how time flies, isn't it? Especially during the summer months when we're out and about and busy with lots of other things. The photo of Joanne and Bonnie is lovely and I agree, Joanne doesn't look her age, lucky her! I can see you're going to be busy in the garden with all those seeds, how generous of Marlene. I've only got one house plant, an orchid, but I remember having spider plants and cacti when I was still at home, easy plants to look after. I've got Anna and Theo waiting for me on my Kindle, I really like Amanda Prowse but some books are definitely better than others. I love Padstow and that area of Cornwall. We stay just outside Bude when we holiday in Cornwall and travel up and down the coast visiting various places, we love it there. Give Trebarwith Strand a try with Oliver, we discovered this beach a few years ago and it's a firm favourite now with its caves and rockpools:- http://jo-throughthekeyhole.blogspot.com/2014/07/trebarwith-strand.html
Have a great time.

Loving these wonderful photos! I, too, blinked. My youngest will be 26 at the end of the month!

I’ve always wanted to go and see the Eden Project, have a fantastic time on your holidays. I love a chatty post, you girls are lovely and you’re right that Joanne doesnt look 30, she has beautiful skin xx


Love the photo of your daughter and baby .
What a great win , enjoy.
Have a lovely holiday the sun is back out in the South West ,after a few days of rain.

Just had to stop by from Jo's blog!
That's a lovely picture of your daughter and baby, the babies grow so quickly don't they.
Enjoy your holiday.

Hi Maggie, your so called plastic plant in the kitchen window is a choclate begonia. Your lucky girl. I have been looking for one for along time. Take care of it. Your daughter and her little one are gorgous. Have a great day. hugs

I'm sure you cherish this special time with Bonnie. You get to watch her change a little bit EVERY week.

Hope you have a wonderful vacation with the little Mr. Oliver. Sending good weather wishes your way.

Lovely to see how much Bonnie has grown since we bumped into you at the NEC! Your daughter is beautiful and you're right, she has a mini me! Hope you're having a lovely holiday.