This chart could not have a more perfect name for the title of my post :-)

I lost momentum on *En Retard and failed to get it finished in time for Christmas 2018, but when I picked it up last Saturday I found that I only had three stars, the eyes on the reindeer and the backstich on the sleigh to do. 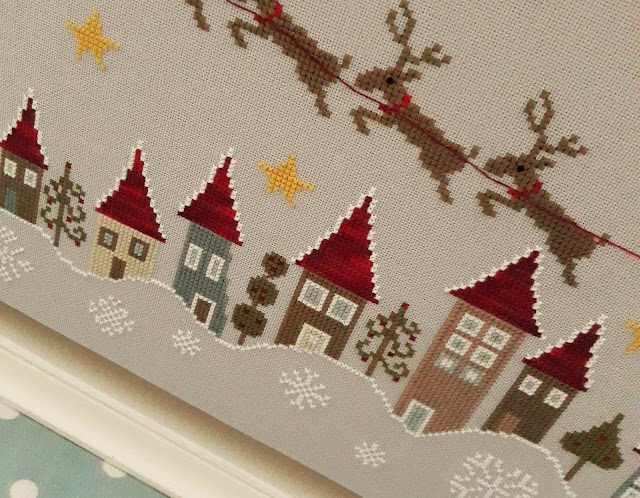 I had an idea when stitching it that I would like it to be mounted in a frame but with linen behind it, and I found the perfect thing in Home Sense.  The frame had string draped inside with those mini pegs to hang things from, so I just cut that away, the backing was perfect, just what I had in mind :-) 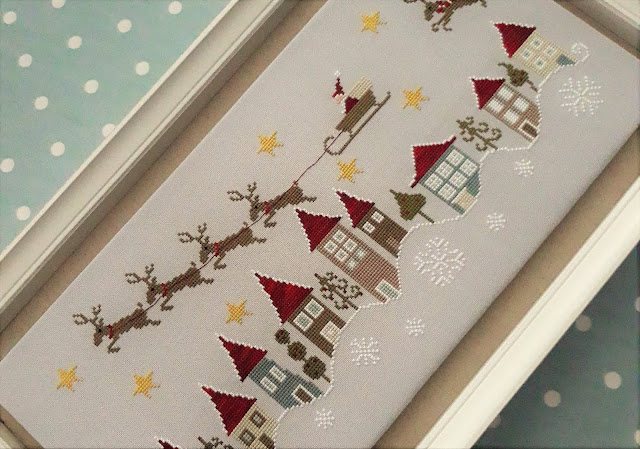 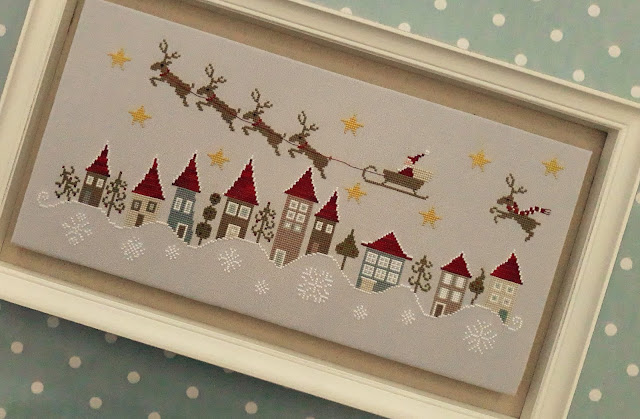 En Retard by Madame Chantilly stitched on 28 count fabric using the called for threads except for the red, which I changed to Threadworx 1089 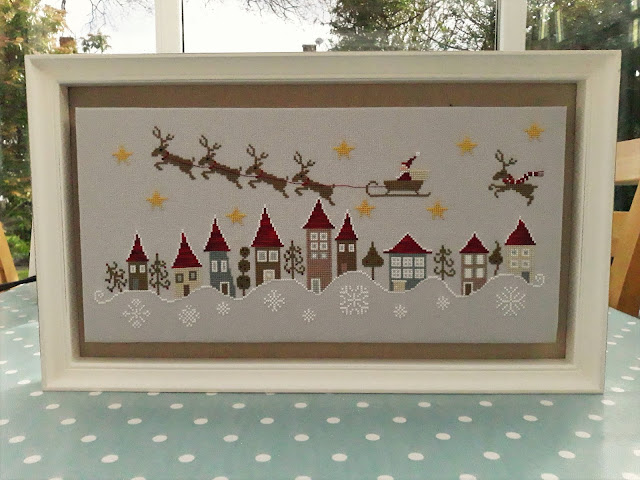 I'm rather pleased with the outcome :-)

It's only the second time I've tried lacing and it's really not as scary as it sounds.  I quite enjoyed the process, to be honest I found it much easier than making up small ornaments.
I initially thought that the frame could do with some embellishing, (it seems to be the thing at the moment when finishing cross stitch), now i'm not so sure.  I'm going to leave it for now, it's got to be packed away until Christmas anyway so I'll see how I feel when it makes another appearance.

Mark went to Twickenham this morning, his work had paid for tickets to see the England game and a hotel for tonight too, no point in him coming all the way back here tonight to go that way again in the morning for work, so I've had a quiet Sunday stitching and catching up on some podcasts.

England won, if you're interested, and he said the atmosphere was amazing :-)

Such a lovely design, and finished off beautifully. It's a shame it's got to be packed away now, I think I'd keep it out on display a bit first. I'm sure Mark will have had a great day, it's always better when your team wins.

This finish looks perfect, Maggie! I feel the same way about lacing--I was surprised that it really isn't as hard as I thought it would be. I've only lace a few things, but have many more "waiting in the wings!"

Hope you have a lovely week ahead! ♥

That turned out so pretty. I love the frame just the way it is but then I like a simple clean look to things.

What a great stitch and finish ,love it .
Also love your Robin .
Thank you for your comments to me , I could not sent a thank you back , why I don't know .
Have a fun week hugs.

I love your cross stitch and how you have framed it. Looks perfect!

The finish is just beautiful Maggie!

That is so beautiful …

Beautiful. I do like Christmas cross stitches but always think its such a shame that they end up back stored away until the following Christmas. I have a lovely Teresa Wentzler Christmas sampler but haven't done it for that reason.

What a cute design! It's perfect how you've finished it:)

A fabulous design, finished so lovely too.

A lovely finish. I like how you mounted it in the frame.

Turned out lovely. Back when I did a lot of cross stitch I went back and forth about having things framed with glass vs no glass. You see the stitching and texture better without glass; but.......no way to keep it dust free and clean. That was years ago for myself, so am wondering, is there now a good method for keeping cross stitch fresh looking when not under glass?