Coming to you from a different location today

Saturday was our stitching meet up at the Nimble Thimble.
A group of us meet up twice a year, April and October, for a day of stitching, stashing and eating.

For the last few years I've made a weekend of it and stayed over, I stayed at Everglades once before, It's run by a lovely couple who extended their bungalow to have separate accommodation for visitors, they also have a chalet in the garden, and this is where I stayed this time.

I'm going back home in the morning, it's been lovely to get away and enjoy some uninterrupted stitching and knitting time. 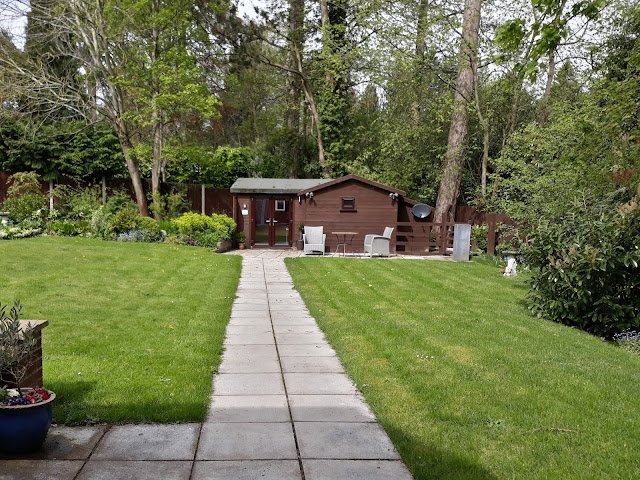 I made a new stitching start while we were there yesterday, Suzannah by Carriage House Samplings, this was the chart I mentioned in a previous post that I was waiting for fabric to start.

This is how much I got done yesterday, It doesn't really look a lot does it?  Funny how when you look at a chart you can underestimate how much actual time it will take to stitch, lol

I have done a little more this afternoon and made a start on her hair. 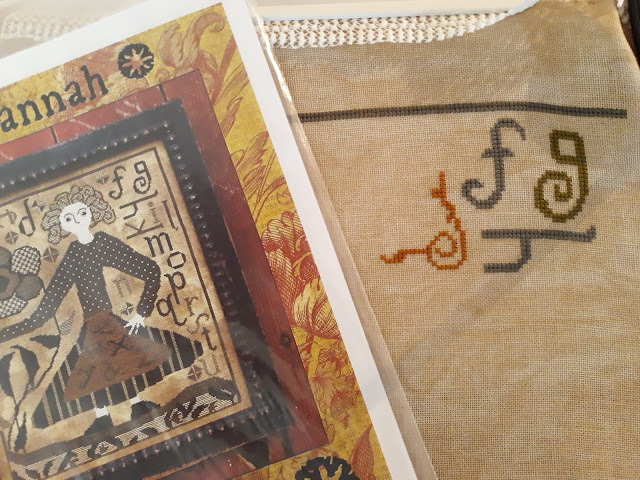 I didn't venture into the shop until after lunch and I was very careful about what I bought.
Having had a clear out recently I'm determined to get through some of the charts I've had for a while and not add to my stash buying charts that will sit there for years.

My bargain buy was this complete set of all 12 months of the Calendar Girls series.
I paid £28 for the set, which works out to just over £2.30 per chart!
They are something that I've been wanting to stitch so I was very happy with that :-) 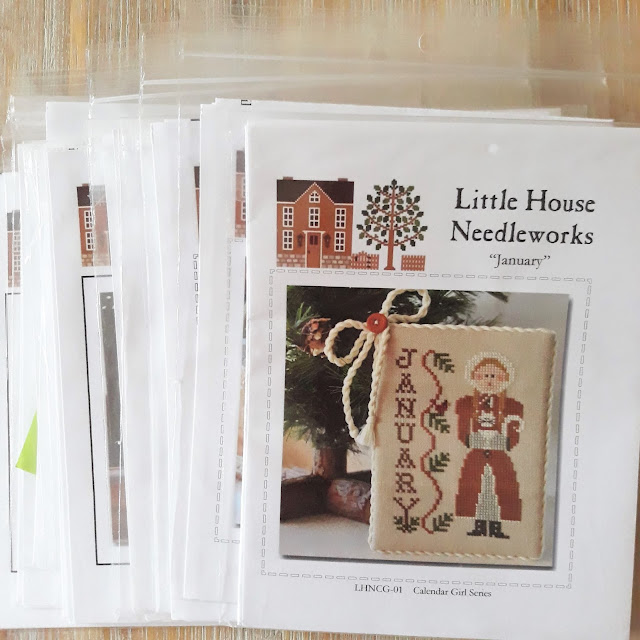 Two other charts, Robin's Song is so pretty, Ursh was stitching this at the meet up and I think I managed to nab the last chart! 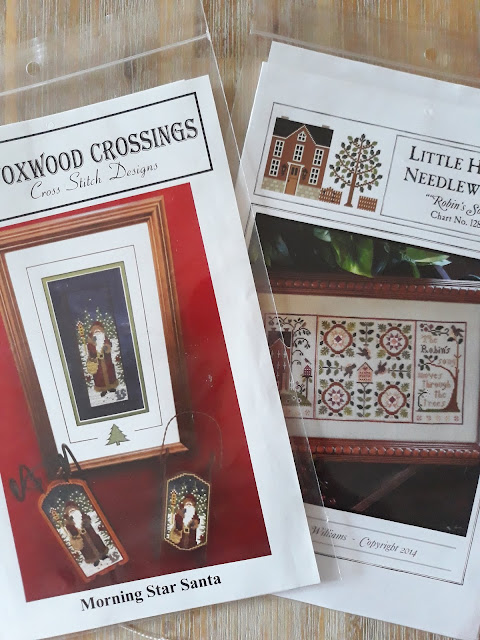 Two sleds.
There were only 4 sleds on sale and Tina bought the other 2
The Morning Star Santa (chart above) will go on one sled, Tina bought the Snowman chart and we are going to do a chart swap 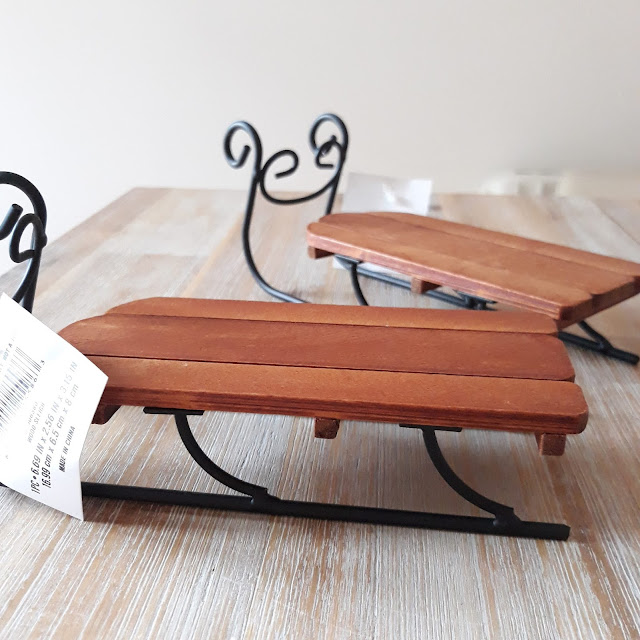 I also bought 2 small pieces of fabric (which are not photographing very well so I gave up).

I was watching an episode of Crafternoon Treats podcast the other week and she was showing her April Sock Club yarn.  The club had already been posted and received by those who signed up so it was not a spoiler but when I saw the colourway and she said there was some left in her etsy shop I had to stop watching and go over and order some!

The inspiration behind the dying was those little Cadbury mini eggs.
(image from Google) 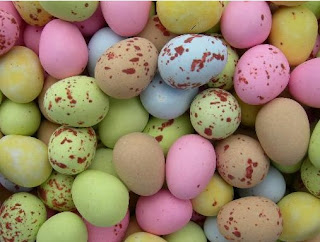 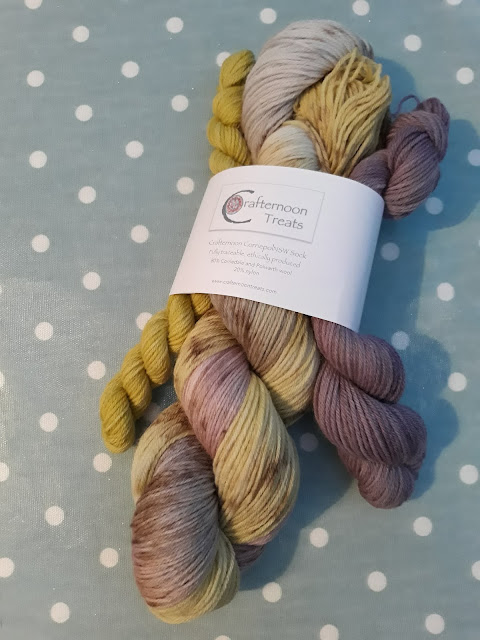 I wanted to have another attempt at socks and thought that If I chose a yarn that I really really loved I would be more inclined to want to see it to the end, lol

Is't the yarn pretty knit up? I love it! and it's so nice to knit with, not at all like the commercial sock yarns I've tried with in the past. 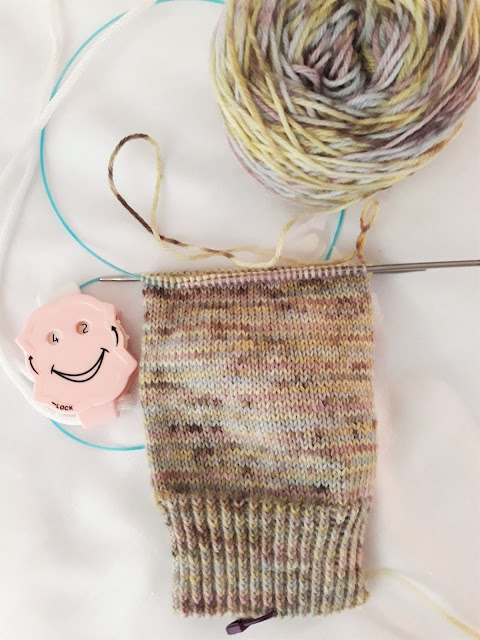 Ok, that's it for now, i'm off to enjoy a bit more stitching time while the light is still on my side, later I will do a few more rounds on my sock.

See you next week
(when I will again be in a different location!)

Nice buys from the shop at your meet-up. Tina stitched and sent me a sled in an exchange, they do look effective on the tree at Christmas and no finishing off to do LOL
Nice new sock yarn, its knitting up prettily.

How nice to have a get away like that! The color of the wool in your socks is lovely!

What a lovely little place to stay. We always stay in a private let; much quieter and more peaceful than being in a holiday park. I love that new sock yarn and the little yarn bundle looks sweet enough to eat! Best, Jane :)

Love that yarn, I can't wait to see your socks.

How lovely to have these meet ups to look forward to twice a year, and nice that you make a weekend of it, such a treat to have a couple of days away. You picked up some great charts, I do like the Calendar Girls ones. I could spend a fortune in Ellie's shop, I don't think she dyes a colour that I don't like. Your sock is looking great, I'm sure that gorgeous yarn will give you all the encouragement you need to make it to the end this time.

That yarn is beautiful knitted up. I look forward to seeing the finished socks.

Your getaway sounds heavenly to me. Nice stash too. The yarn is pretty. Amazing how it looks so different from the ball and knit up!

That looks such a lovely place to stay.
… I like the yarn.

That sounds like a great meeting, that's always nice. I also like the Calender Girls, they look pretty, but you also bought the other two motifs well.
Also with the sock yarn you have bought great, knitted looks just wonderful. I would have accessed that too.
Greetings Martina

Would love spending time there knitting and relaxing, looks like a wonderful peaceful spot. Sounds like you enjoyed yourself. That graph has lots of stitching, looks like it's going to be a time consumer, but I love all the colors. The yarn does look like very lightly colored eggs.

What a great deal on the Calendar Girls set of charts, Maggie! And I love your other purchases, especially the Santa--he will look wonderful on one of those large sleds. So nice to get away with friends who share your passion for stitching! Happy May to you!

we call them retreats over here. Love your buys.

Me, waving hi again as I make my blog rounds.

What a lovely place to stay. Fabulous buys. Love your socks, can't wait to see the end result. Debbie x