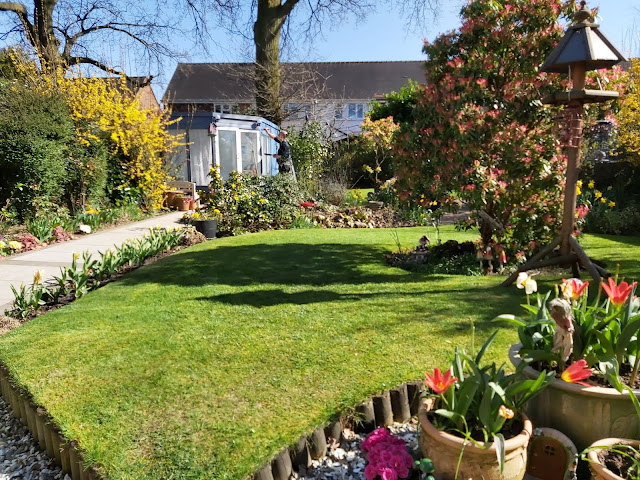 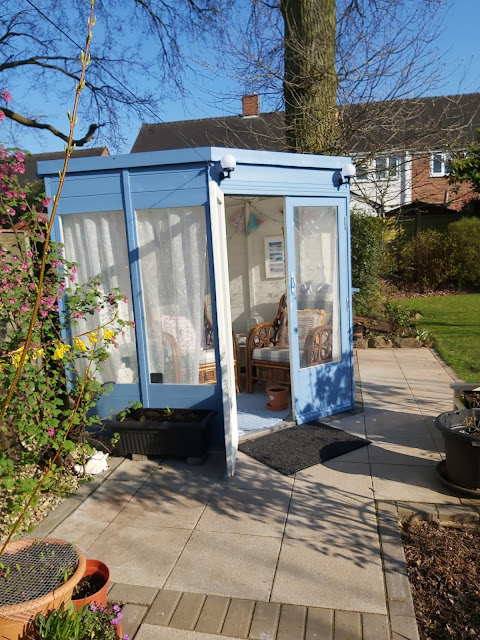 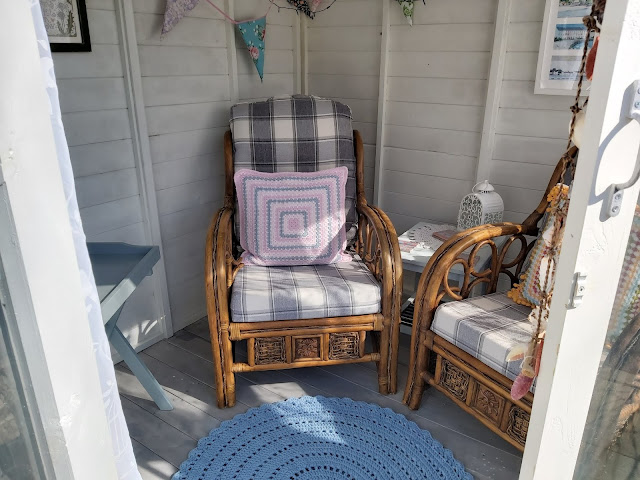 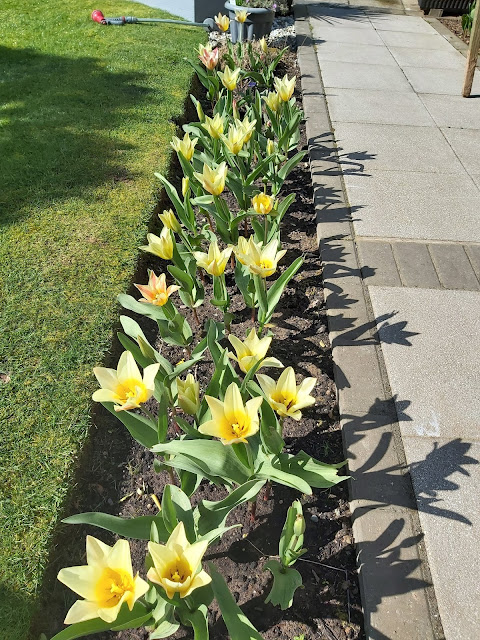 I hope you are all safe and well,.
What a difficult year this is turning out to be, who would have thought at the start of the year when we were all making our plans that we would be in this situation.

I went into work on Tuesday morning but it was only to clear what work I had been doing and show the management how to divert calls.  I don't have to work from home since my main job is answering calls.  Mark came home the same afternoon, they were hoping to carry on but could not continue working and follow the separation guidelines, so the site was closed down for the foreseeable.

On Tuesday the weather was beautiful, so as soon as I got back home I decided to clean out my little blue house, all spiders evicted, (there weren't that many considering no one has been in all winter), while everything was outside I thought I might as well give the floor a fresh coat of paint too.

Mark went on to paint the outside of both the shed and my little house on Wednesday while I did some tidying up around the garden and mowed the lawns, the borders are still too heavy to turn the soil over yet.  Up until this week I've had no desire to get out and do anything in the garden but the few days of sunshine we has spured on.

I've been shopping this morning, not much to get but I only want to go once this week and I had to get a few things for mum too.  I didn't like being in the supermarket, they were only letting a certain number in at a time and people were being very good about keeping distance but I still felt uncomfortable, I was glad to get home.  I've wiped all my shopping with antibac wipes before putting it away, some might think that's a bit extreme but it makes me feel better knowing it's done.

It feels a bit like we have retired being at home together, lol  If you've read this blog for some time you will know that Mark works away all week and I'm used to my own company and like my own space, so this is going to be strange for both of us.  So far we've been ok, it's only day four though, ask me in two weeks time and the answer may be different, lol
We work at different speeds me and Mark, I get up and get straight on with what I've got to do, whereas Mark will get up, watch the kettle boil, stand and have a cuppa, and then walk aimlessly around for a while.  By the time he's thought about doing it I've done it and moved on to the next thing!  I've said we must make a list of things to be done and get on with them so that we have some sort of routine, I know it will be hard come next week for him because he used to working not being round home all the time.

Not much stitching or knitting going on this week but there will be plenty of time for me to do that over the next two weeks.

Stay safe and stay at home

Your garden is beautiful, I love your sun house, I'm jealous, must be lovely to sit in there.

Lovely garden, we have been doing the same working in the garden Sun house is open , but need to wast the pillows this year , hubby also painting once he gets going ha .
Take care ,enjoy your day .

Your garden and your little blue house look fabulous. It's nice to get the outside jobs done so early in the season so that they can be enjoyed. I'm used to having Mick working from home some days but not all the time and he's already disturbing my routine, lol. I'd rather him be safe at home though.

Looks like all our husbands are home for awhile.I am use to
Dave being home thru the winter months. He is taking care of me after my kidney operation which was a good thing it was done in February before all this started. I do love your garden and all your pretty flowers and the blue house is lovely. big hugs Lynda Ruth

Love seeing your pretty shots of spring and sunshine and blue skies, Maggie! Here, we only had one day of sunshine the entire week which makes staying at home even more difficult. I haven't left the house in two weeks as my husband has been picking up our groceries once a week (we order online and they bring them to the car--and like you, I wipe every single item down!). Take care now and good luck in your "practice retirement"--we are undergoing the same thing!

So nice to see the photographs of your lovely looking garden and the blue house looks nice too :)

For us its fine, we are together all of the time anyway, but for some it will prove difficult, my daughter's husband will be home after next Tuesday and she's not looking forward to it at all, lol
I just love your little blue summer house and the tulips are gorgeous.
Briony
x

The sunshine has been most welcome this week for so many.
I do feel for those with small children with both parents at home especially if they have to work from home as well and supervise school work and temper tantrums!
Take care Maggie x

Your garden looks beautiful. We had one nice week but it has been rainy and cold so I am busy with inside stuff. I don't mind at all. I'm getting lots of stuff done!

You have a beautiful garden, and your little blue house is really cute, I could stay there for hours.
Yes, it is a difficult time, but we all hope that it will get better soon.
stay healthy, Martina

Beautiful garden and your shed is just the perfect place to relax.

It's been a lovely few days of sunshine, your flowers are beautiful. I love your little house and can imagine you sitting there with your stitching.

Your garden is lovely. It's so neat and tidy.