Looks like the hot sunny weather is back with us again.  I've had a lovely quiet day so far, all my chores are up to date and I've had some time sitting in the garden listening to my audio book.

Yesterday I managed to finish stitching July's calendar girl and will have a go at fully finishing her tomorrow. 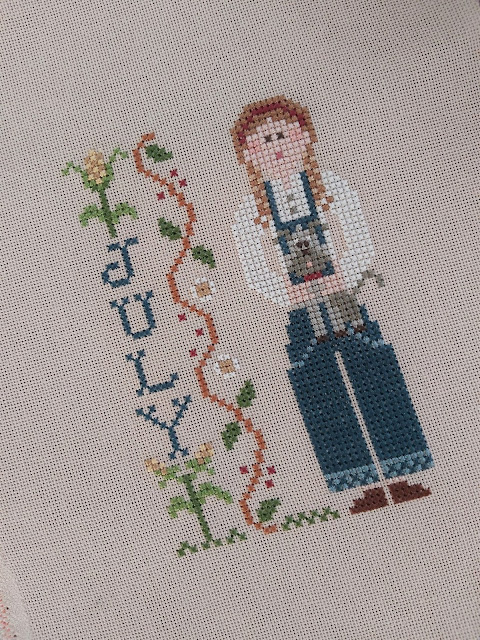 I knitted five new dishcloths last week.  I'm a fairly new convert to knitted dishcloths and have developed a bit of an obsession with them 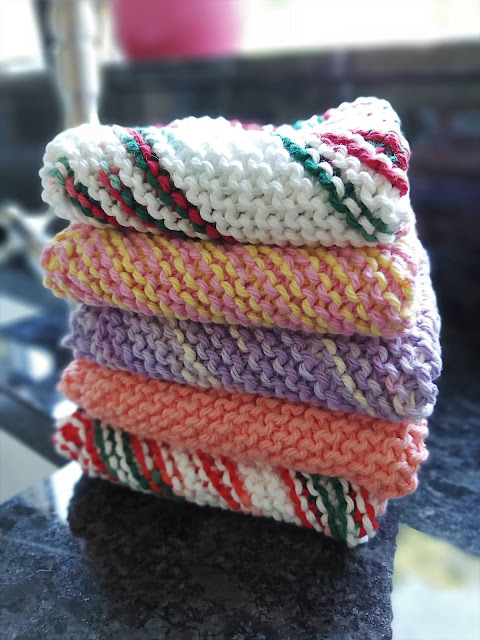 Yes, there are a couple of Christmas ones in there too 🎄🎅 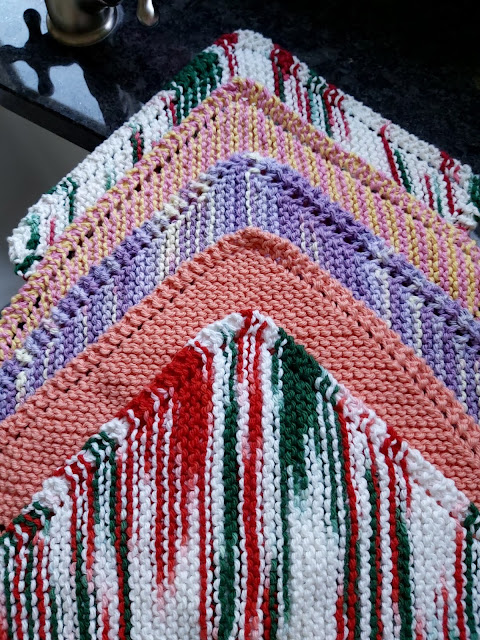 I've wanted to knit the Dandelion cardigan for quite a while now so today I took the plunge and cast on.  Yarn is Drops Nord from stash 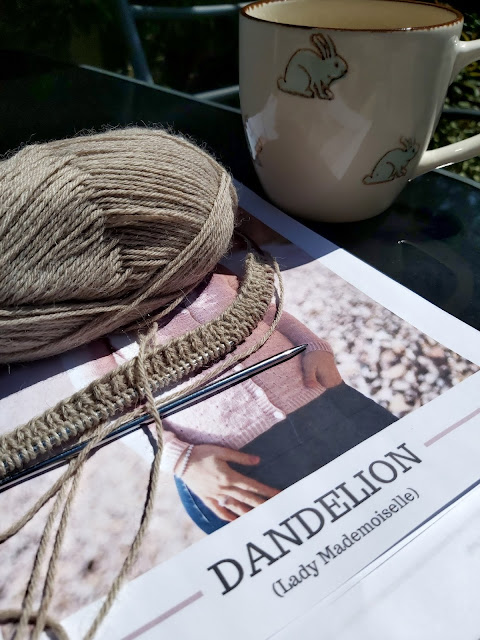 I haven't heard anything from work regarding my job.  I had to go into a meeting last Friday which didn't really tell me anymore.  There was another new position on offer which at first looked promising but I have since found out that it is more specialized role for which I do not have the qualifications.  The role of PA / Admin is no longer an option either because they have changed the goal posts and decided that the person who takes on this role will need to have I.T qualifications to assist in the day to day I.T issues .  That leaves the Service Coordinator position which to be honest I don't want.  So, It looks very much like I will be made redundant unless by some miracle they find another role I can fill.  I'm not holding my breath.

On a more pleasant note, I went for a lovely walk last week, up to the Wychbury Obelisk.  This is another local to me walk and there are several paths you can take to get to the top of Wychbury Hill, this time I took the public footpath not far from our house.

The Obelisk Is 84 feet high was built in 1747 under the instruction of Lord Littleton.

The graffiti, Who put Bella in the Witch Elm first appeared on the obelisk in the 1970's and  refers to a local murder mystery from the 1940's
Apparently on 18th April 1943 four local lads were poaching or bird-nesting in Hagley wood and they came upon a skull in a hollowed out trunk of a wych elm tree.  The younger of the lads confessed the find to his parents and the police were told.  An investigation was launched but apart from discovering that the remains were female the body was not identified.

The views from the top of the hill are fabulous, you can see for miles and is well worth the climb 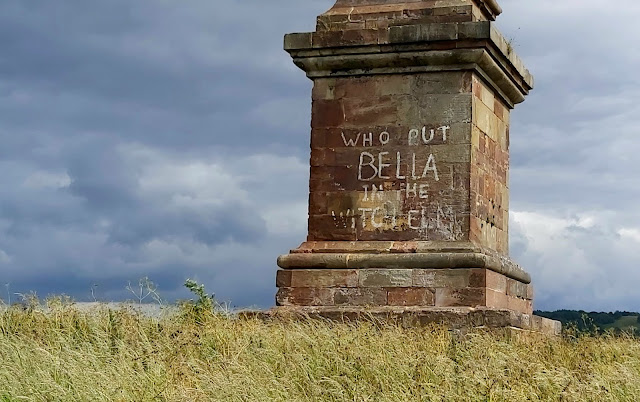 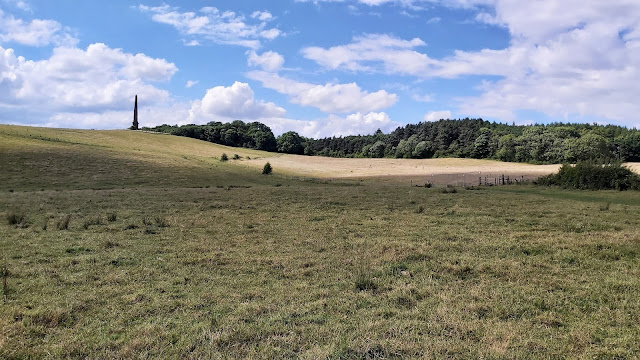 Great views with a fantastic story. You have been busy, I love those dishcloths. It is hard when you are in limbo at work, I was made redundant twice, neither time felt good, the 2nd time I knew before they finalised the process as I had a temporary role, even though I knew it was coming it was still hard.

What a beautiful place to walk! I love the girl in her denim overalls for July. I also have had the bug to knit some dishcloths lately. My old ones are so faded after years of use. Congrats on all the finishes!

Your cross-stitch is lovely as are your dishcloths, I went through a phase of making them but I don't really enjoy using them as dishcloths, I like folding them into a pile and displaying them in a little basket they look ever so pretty, I hope all turns out well for you at work, I went through a similar experience 3 years ago and I felt that my only option was to retire as I didn't fancy working in the other areas available to me, a few weeks after I left they gave all my colleagues redundancy money and I missed out, I'd been told there wouldn't be any so make sure you get what is entitled to you.

What a lovely walk, beautiful views. I hope they find a position for you if that is what you want.

The July calendar girl is very nice. Hope you post a picture of the finish.

Love the dishcloths, I presume they are made from cotton yarn? I would like to make some myself. Did you find the pattern on Ravelry? I know, questions, questions :)

Thank you. Yes the dishcloths are made from cotton yarn pattern is on Ravelry, grandmas dishcloth. There are loads of variations on the pattern to choose from

Such a cute finish, Maggie--I love the little overalls on the July girl :) And your dishcloths look (almost) too pretty to use!

I'm sad to hear about your job and I do hope something turns up. Such a hard time for so many right now... Glad you at least have your hobbies and that beautiful countryside to walk about in to keep your mind on happy things. Take care now ♥

I do like the look of the dishcloths.
Beautiful photographs from your walk, the views are amazing.

I do love the July girl .
The dish cloths are great I must knit a few more .
Your walk looked lovely .
Have a good weekend.

July is a great design, your knitted dishcloths are a neat idea. Great views on your walk, thanks for the history too, very intriguing

I like the simplicity of the cross stitch design. I wish I could do my embroidery as I have two projects waiting, but my eyes have been blurry lately. I've been doing crochet work instead, which I can manage without too much looking down. The walk must have been satisfying as a way of getting some fresh air and exercise with wonderful views along the way.

Cute stitching! And I love the scenery. I actually saw a crime special on the Witch Elm tree case. So fascinating, and sad. How neat to get to see the graffitti in person.

It is a well-known fact that Illuminati consist of Multi Millionaires,
Billionaires who have major influence regarding most global affairs,
including the planning of a New World Order. Many world leaders,
Presidents, Prime Ministers, royalty and senior executives of major Fortune
500 companies are members of Illuminati. join a secret cabal of mysterious
forces and become rich with boundless measures of wealth in your company or
any given business, the great Illuminati can make everything possible just
contact : join666cult@gmail.com or WhatsApp +1(646)481-0376 EL
IAI LEXION Thaddeus Iam Vice-President of Citizen Outreach THE ILLUMINATI
ORGANIZATION

BEWARE OF SCAMMERS, THERE IS NO SUCH THING AS REGISTRATION FEE AND YOU MUST
BE ABOVE THE AGE OF 18YRS.
THANKS.

I sincerely hope your job situation works out for you.