The last of the Jolly July stitching

I managed to get two more pieces stitched during Jolly July.  Oliver asked if he could have a reindeer ornament this year, I took this Rudolph from another chart, it's not the sort of thing I would usually stitch but I think it looks quite cute 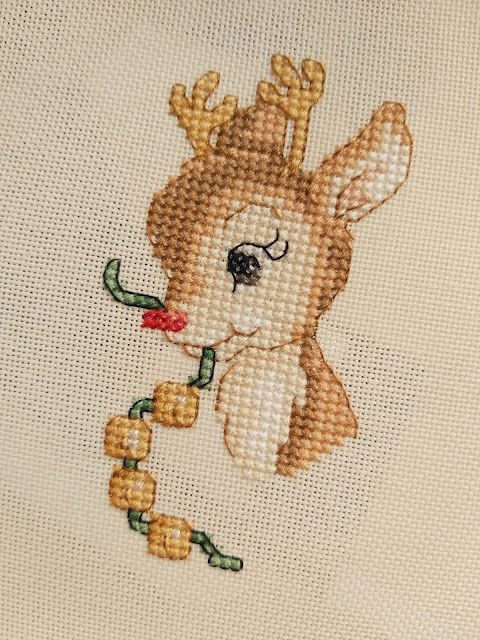 I also finished Button Tree by The Drawn Thread.  I  decided to use buttons from my stash in the end rather than buy some specially, now I need to find a frame for it. 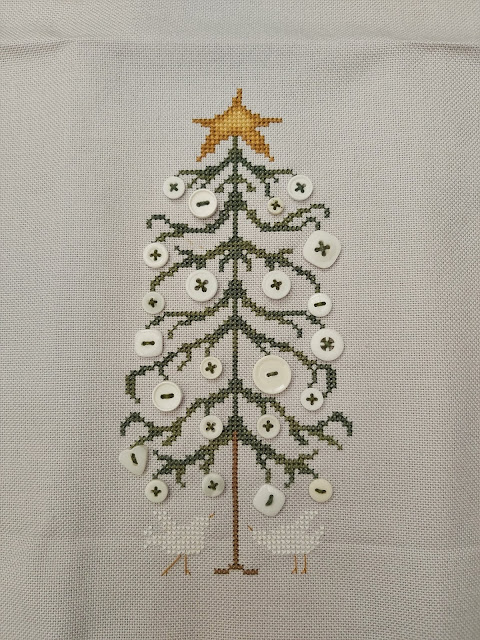 I'm quite chuffed that I managed to finish all my Jolly July stitching.  The only one that I didn't get to work on was Jacob's Christmas Stocking.  That was a none starter really as I was waiting for threads which only came in the last week of July.  That will now become a focus for me during August.  I've already made a decent start and I'll share that in another post.

I was way ahead with my August calendar girl having finished her in June.  Although I made a boo boo in the making up.  Can you spot it?  I forgot to make a bow by the button!
I kept looking and thinking something didn't look right, it was on display a couple of days before I realised what was missing.  I don't have enough thread of that colour left to make more cording so it will have to wait now until I put another thread order in 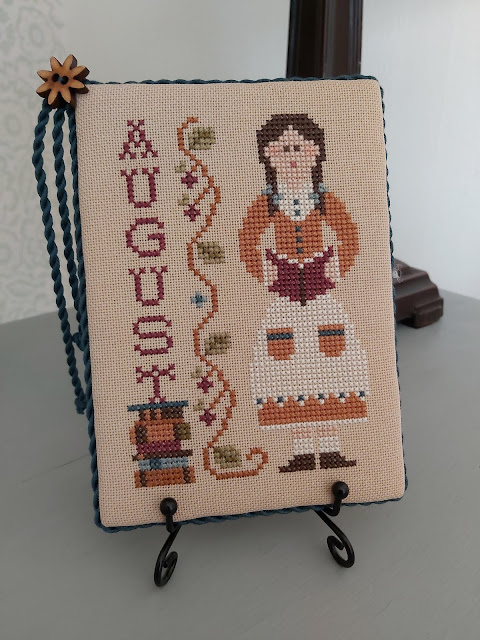 We had Jacob for a few hours on Saturday while Joanne and Gavin took Bonnie to a drive in cinema to watch her favourite film, Frozen.

He's seven and a half months now and sitting up, he also cut two teeth this week.  Growing up far too quickly 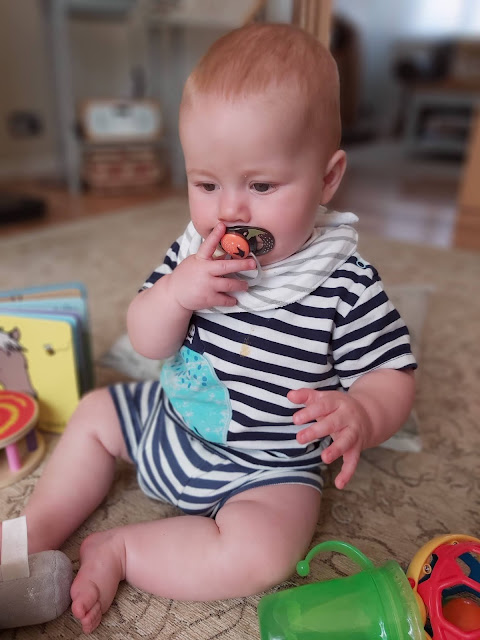 Joanne only tried him with this cup the day before, he soon got the hang of it though.
They found out recently that he has an intolerance to milk and now his formula is on prescription.  It only took about four months of Joanne keep saying that he made a fuss over having his bottle and didn't settle or seem comfortable after, and the fact that he only pooped a couple of times a week for the doctor to say well yes it could be!!
He is much more settled now and sleeps better and poops, lol.  It does mean though that now he is eating solids she has to be careful not to give him anything that contains milk or milk products.
But as you can see by those chubby legs and hands, he's not doing too bad on it and from what she has been told babies usually out grow it by the time they are toddlers. 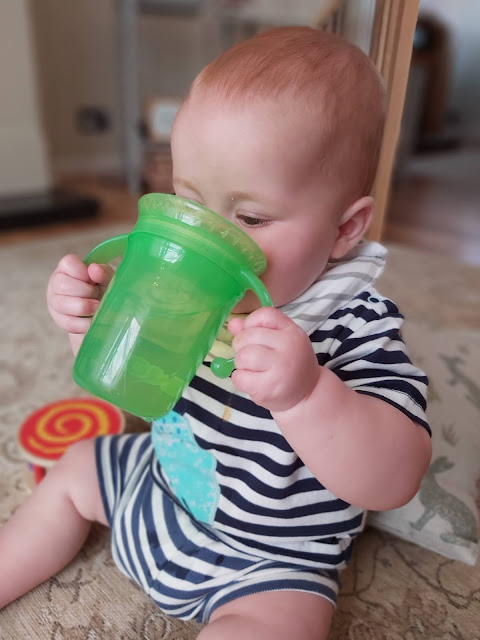 What a cute little guy! It is too bad it took the Dr. awhile to agree with Mom!

I would never have noticed anything missing on your calendar girl stitchery.

I love that little Rudolf cross stitch! And I also wouldn't have noticed that a bow was missing on that cute little Back-to-School August cross stitch project :^)

You've been very busy! Your little guy is beautiful... I don't know why doctors don't listen to moms. The same thing happened with my daughter and her first baby.

What a lovely little boy .
Your stitching looks fab .
I must start on more Christmas stitching soon .
Enjoy your week .
Thank you for your comments on my blog .
Sorry I can't get back to you yet I am on the new blog and it still won't let me
email back .

Jacob looks a happy chap and gorgeous. Love your stitching, the button tree is perfect. I'm finding it too hot to do anything at the mo, crafting is looked at most days but nothing is done.

The little reindeer is cute, but not as cute as Jacob. He's so like Bonnie. Mums always knows their kids better than doctors do, it's a shame they're not listened to more. You did well with all your stitching in Jolly July.

Jacob is a happy looking little boy.
The reindeer for Oliver is cute. Only you said the bow was missing, I wouldn't have noticed it on your August calendar girl.

Your stitchery is lovely I love Rudolf, Little Jacob is so cute.

Oh what a darling boy Jacob is! I love the reindeer for Oliver so much. The button tree is very cute.

My Grandson was diagnosed with milk protein intolerance at the age of 4 - out grew it by the age of 6 - it's amazing what foods have milk protein added to them We found going back to basics was the best option - I used to bake his bread with oil instead of butter, I even baked his cakes with oil based marg and dairy free choc buttons - the dairy free options in the supermarket are awful, it was trial and error until we found items that he liked. All sweeties had to be checked - Haribo's were a life saver lol. Easter was horrendous until I found plastic eggs in Hobbycraft that we could fill ourselves with jelly sweeties and dairy free chocolate buttons. We really stuck hard to the regime and we think that's why it paid off so quickly. The school nursery said that they'd give him a milk free lunch but he ended up having to take his own food in as they didn't have time when putting out the lunches to be careful and watch what he was being given.
Hope the above will help your Daughter, when my Grandson was diagnosed there didn't seem to be much help and support - hope it's changed now Good Luck xx

He is precious! And your stitching is adorable. I'm partial to the first one. Reminds me of being a little girl at Christmas.

I love your two Christmas stitches!! And those baby legs are the best...

I like your button tree and the other stitch craft. Your grandson is cute. We don't have any babies or toddlers as yet as our grands are grown up and not settled with a family, but it must be fun.

Lovely stitching and lovely photographs of Jacob, such a cutie :)

Oh, my, Maggie--I wish I could reach through the computer screen and squeeze those darling chubby thighs of Jacob's! How very cute he is! I'm so glad they figured out the milk problem and that he is sleeping (and pooping!) better now :)

Love that Oliver is old enough to ask for his own ornament theme and that is a darling reindeer. Your button tree is cute, too--I've always meant to stitch that one myself. I don't think I would have noticed the missing bow if you hadn't mentioned it--she is still an adorable girl :)

Enjoy your week ahead ♥