Oliver is staying with us this week and on Monday we had a day out to Wookey Hole.
It was my second choice for a day out to be honest, I would have much rather visited Cheddar Gorge but the caves there are still closed to visitors at the moment.

It's about a two and a half hour drive so we set off just after 8.30am and the weather was sunny for the whole drive.  As soon as we passed through the ticket office it started to rain, we just managed a quick dash to shelter before the heavens opened

A bit of rain never dampens the British spirit though :-) 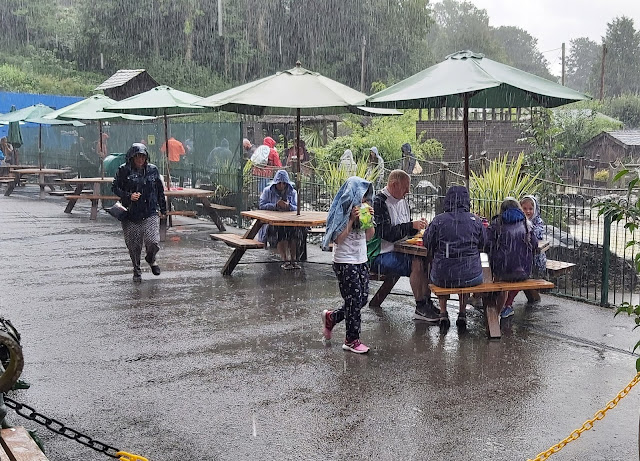 The rain lasted a good 45 minutes so when it eased we joined the queue for the caves even though our ticket time was 2pm.
The Wookey Hole website asks you to book a time for the caves, but it looked as though there was no particular system to letting people in, In fact I don't think they had limited the number of visitors to the sight at all judging by the number of people around.  It was virtually impossible to social distance, although mask wearing was mandatory inside the cave. 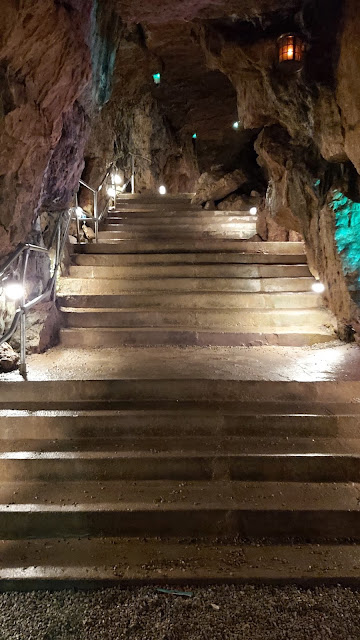 They have cage aged cheese (and wine)

It is obviously better, with more to see than my photos show.

On the same site and with access only after you have through the cave is  Animatronic Dinosaur Valley which was actually quite good, you might remember me saying when Oliver was a toddler he absolutely loved dinosaurs, he can still name them all and tell you random facts about them :-) 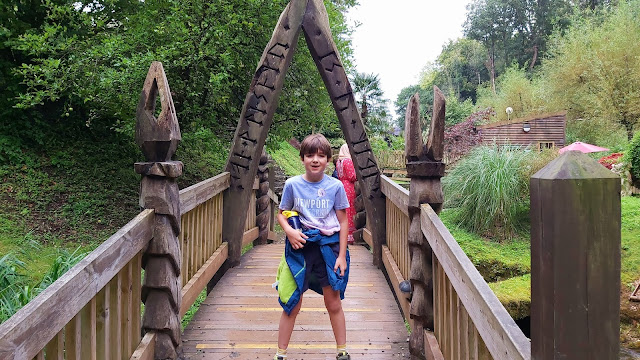 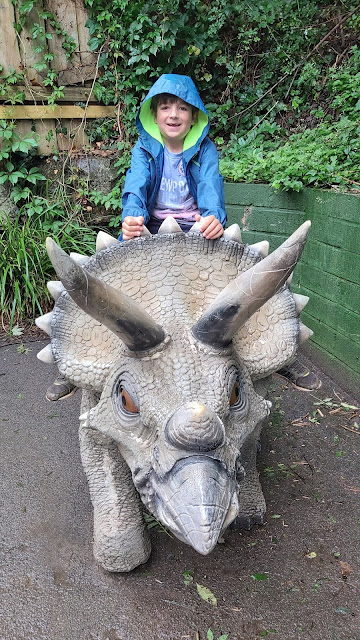 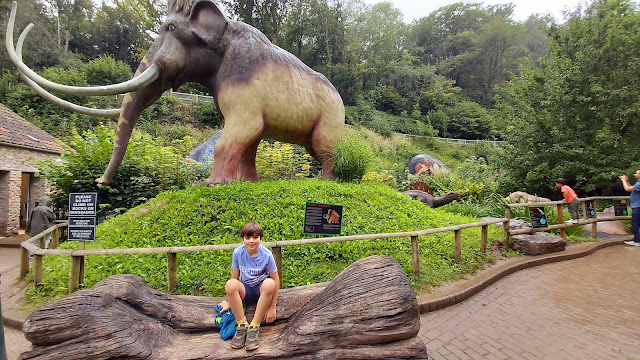 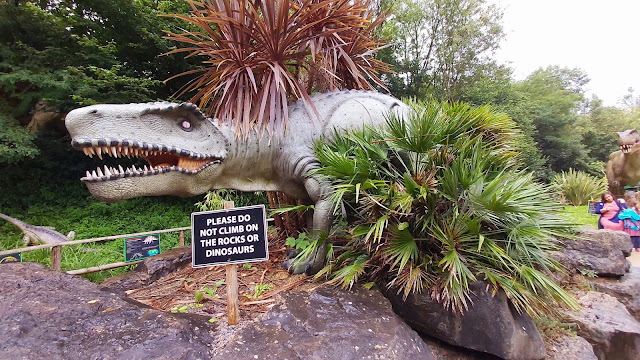 I don't know if this is a smiley face a grimace or terror because there is a T Rex behind, lol

You can see it starting to rain again, just after we came out the cave! 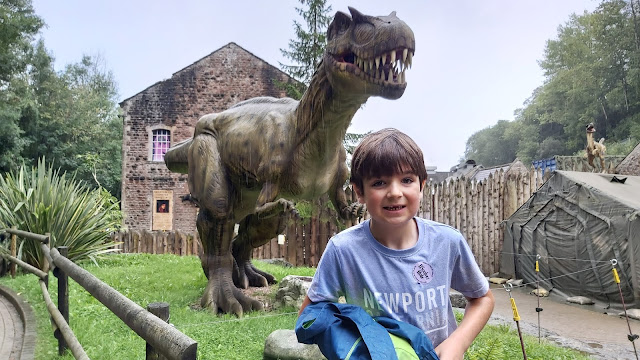 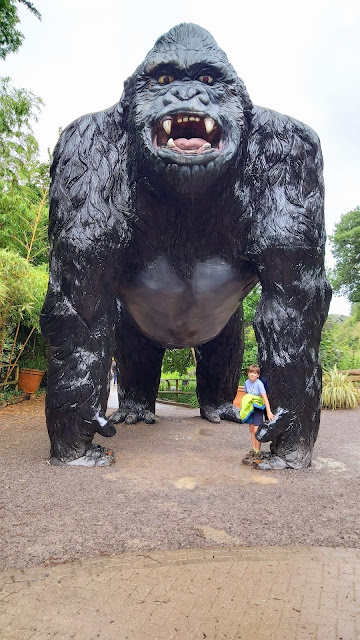 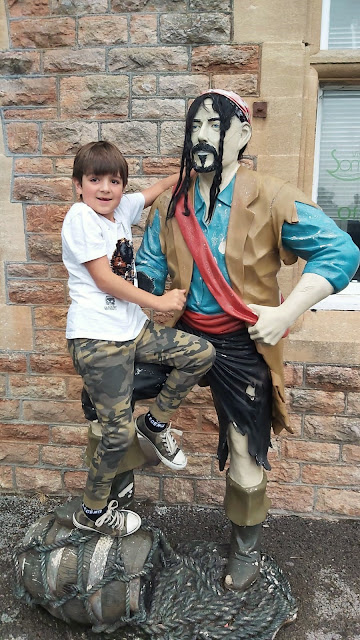 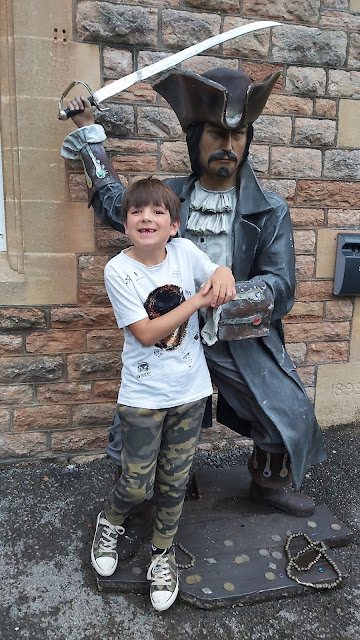 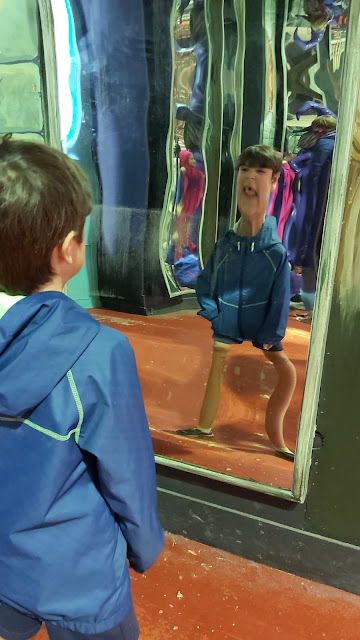 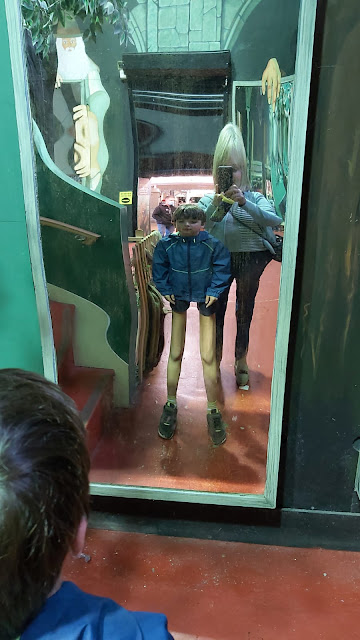 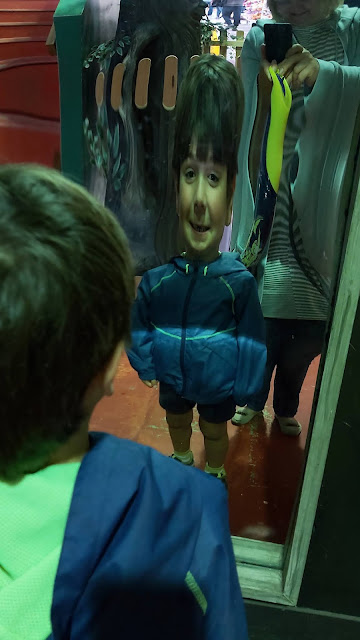 Some of the attractions were closed, because of the virus I assume, although it did say the handmade paper mill was open but when we got there that was closed too so apart from the Pirate Island golf, which to be honest by late afternoon was just water-logged and the ice cream parlor there was nothing else left for us to do, but it was almost time to check into the hotel by then anyway.

Overall I was disappointed really, obviously the weather didn't help but as far as I can see on the website, they are still charging the same price even though an awful lot of stuff is closed and more to the point, they do not seem to be limiting numbers as is suggested.  I wouldn't be rushing back there anytime soon.

The hotel however was very nice, I'd booked us a table for tea at Captain Jack's restaurant, later I saw that the rating was only 2 stars so I wasn't expecting much but it was surprisingly nice, we're not talking posh nosh, and the menu was limited, but it was good.  Our room included breakfast on Tuesday morning, again the food was very nice, no complaints from us.

After breakfast we drove into Wells, Oliver had some money to spend and it was burning a hole in his pocket!
We did have a walk around Wells Cathedral and Vicars' Close too 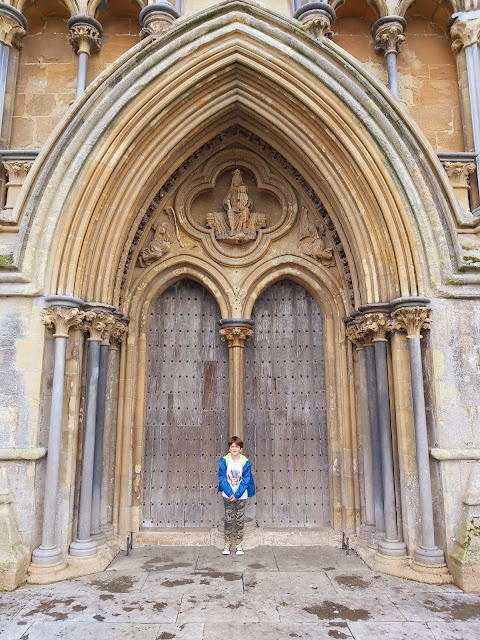 Vicars' Close is the oldest residential street in the UK, it was built over 850 years ago to house the  Vicars Choral, it's residents today are still the vicars choral, organists and virgers. 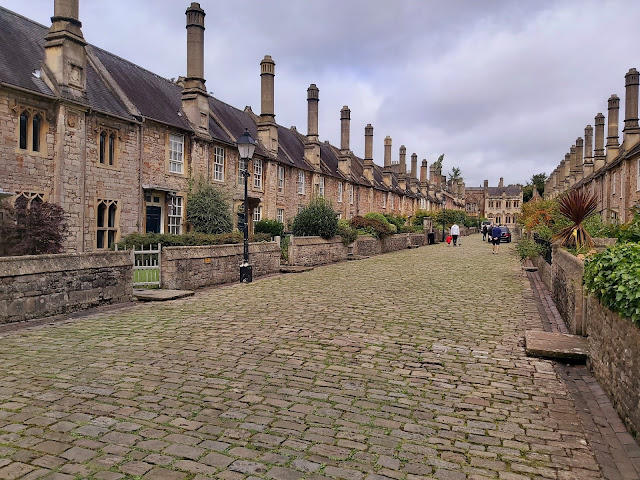 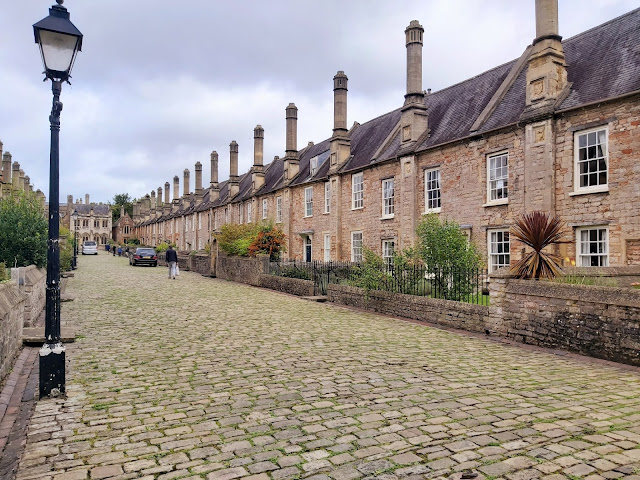 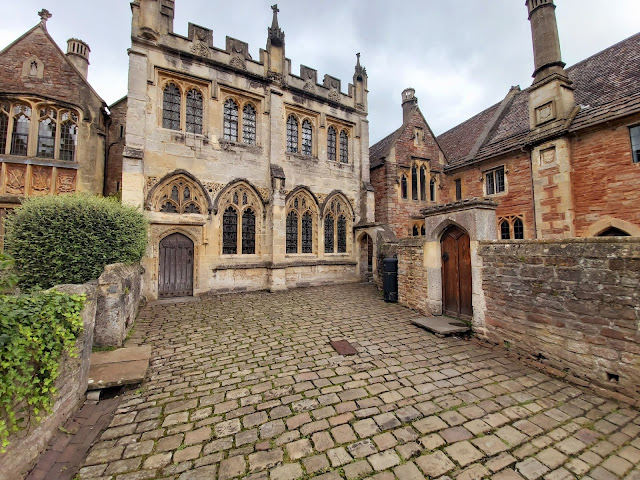 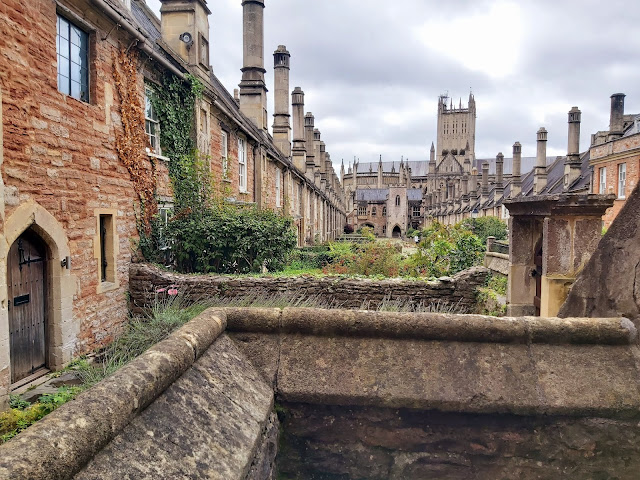 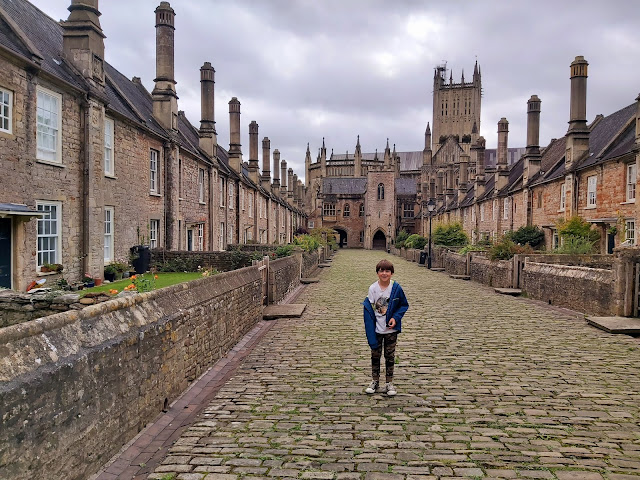 Storm Francis had arrived by Tuesday, we tried to capture how windy it was, I don't think you can quite see it but trust me it was violent! 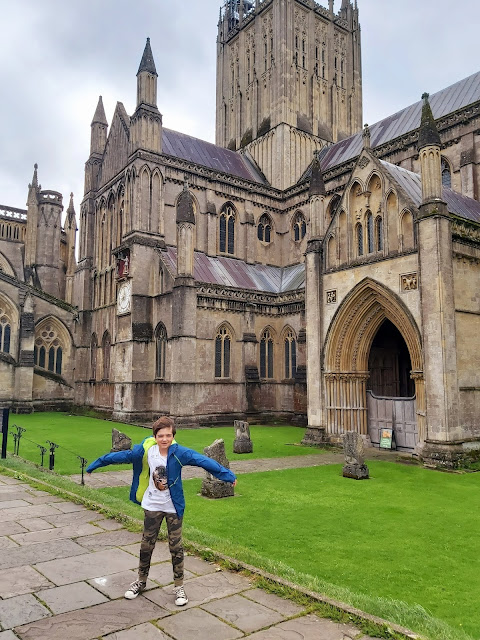 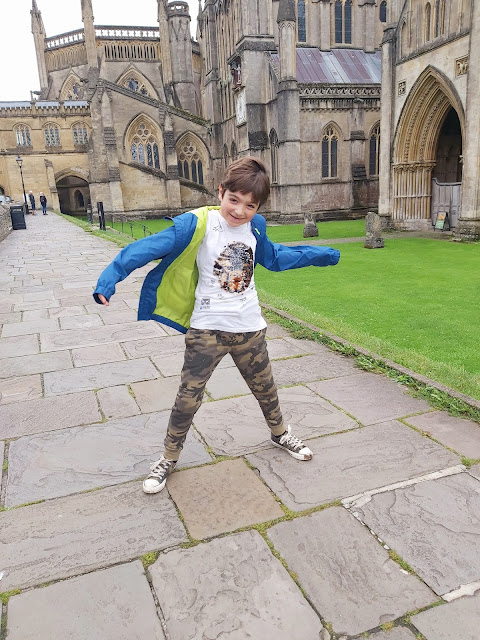 We had a day pottering about the garden yesterday and today it's raining again so our plans to go for walk have been put off, instead we are having a film day, which means I can get a bit of sneaky knitting done :-)

Glad you two are having a grand time. big hugs lynda Ruth

It's years since I have been in Wookey hole, your photos brought back my childhood and younger years. I've never walked the old street in Wells, I will tuck that away for a suggestion when we are home in Somerset again. Through virus and weather I think you made the best of your trip.

What a shame about the weather but it doesn't look as though it dampened Oliver's spirits. It's disappointing that attractions such as this are not enforcing social distancing rules, I know we're trying to get on with life as much as we can but it's very hard when others aren't bothering observing guidelines, especially visitor attractions. The weather is awful here too and forecast for more of the same.

Sounds like you both had a great time. I've never been to Wookey Hole but did visit Cheddar Gorge years ago with DD. We can't let the weather spoil things.

Great photos , sorry about the weather , it's been bad here too.
Oliver is growing .
Looks like you all had some fun.
Have a good week hugs.

It looks as if you had a good time, despite the weather.
It's disappointing that Wookey Hole had so much closed and that their website doesn't appear to tell you that.

My goodness, Oliver is sure getting big! Looks like such a fun weekend and you can tell by his big smile that he thoroughly enjoyed himself in spite of the rain and cloudy weather. We desperately need rain here--the leaves are dry and falling to the ground already as we haven't had more than a sprinkle in the past two months. Enjoy this last bit of August, Maggie ♥

It looks like the weather did not spoil anything for Oliver. I am so envious. My grand children live a few thousand miles away. We must be a bit like the British here in the NW. Rain rarely keeps us from doing whatever we have planned!

It looks like you had a wonderful time. Those caves are amazing. And the vicars close is wonderful. Love those photos.

Oh the photos are wonderful!! We have a cave system here in VA where I am. Luray and Skyline caverns. They have always amazed me. What a great day out! Can't wait to see your knitting!

I enjoyed seeing all of your photographs, bought back memories of a family visit to the caves some years back now!

Take care, and my good wishes for a happy September.

Nice Blog and this blog is very nice and imported.