12th December - The canal that wasn't

When we went for our walk at Leasowes Park last Monday I noticed the canal just off the car park.  There are a series of canals all around the Black Country and Birmingham most are hidden from the busy traffic and unless you go looking you wouldn't know they are there.  This morning I decided to go again and explore the canal.  From what I can find out this is known as the Lapal Canal and is part of the Dudley No. 2 canal which once went to Selly Oak in Birmingham and was opened in 1798.
It turned out to be the canal that wasn't.  I've been reading a bit about it and apparently there is a Lapal Canal Trust who are raising money to do restoration work, the council cleared this small first section but the rest a few years ago but the rest remains overgrown. 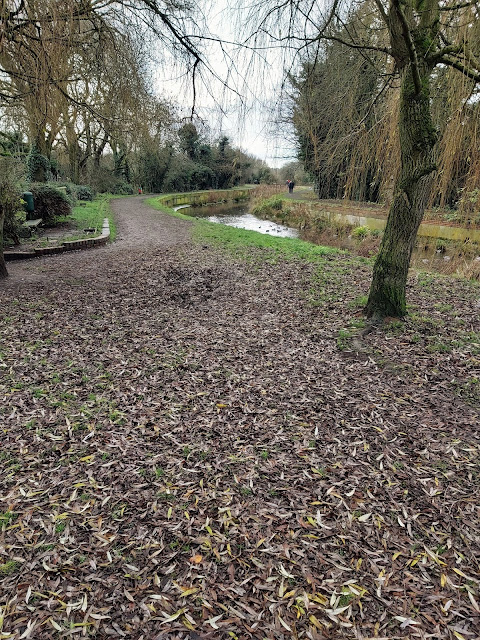 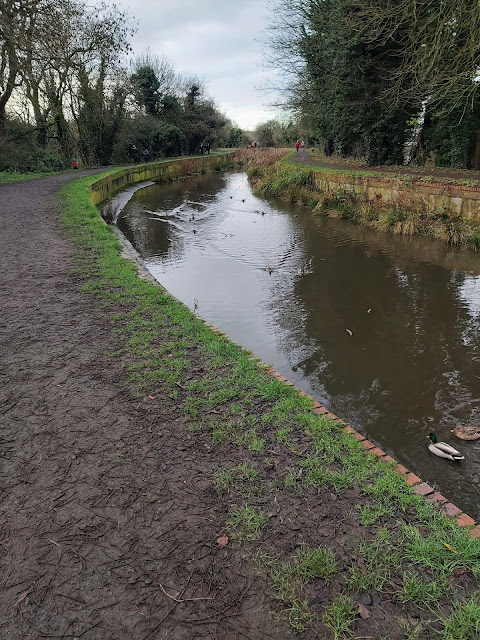 Behind me was the Basin, (Hawne Basin), which is all overgrown 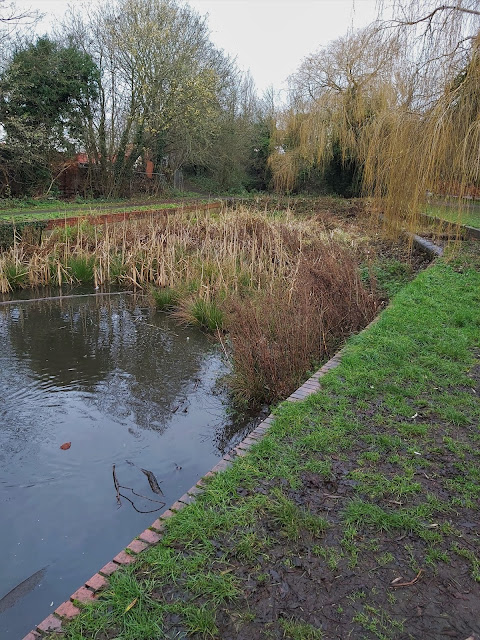 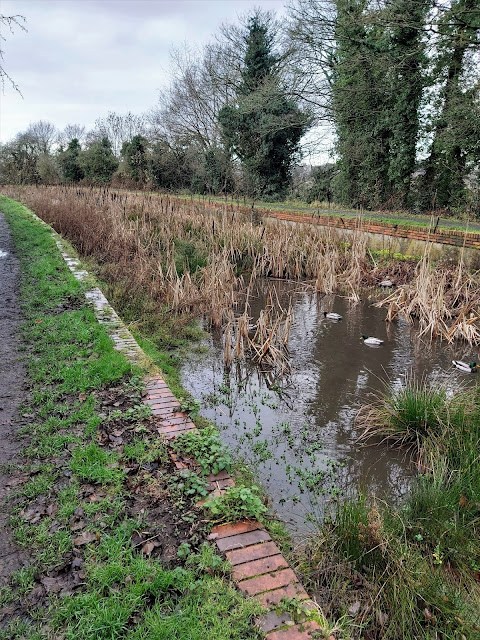 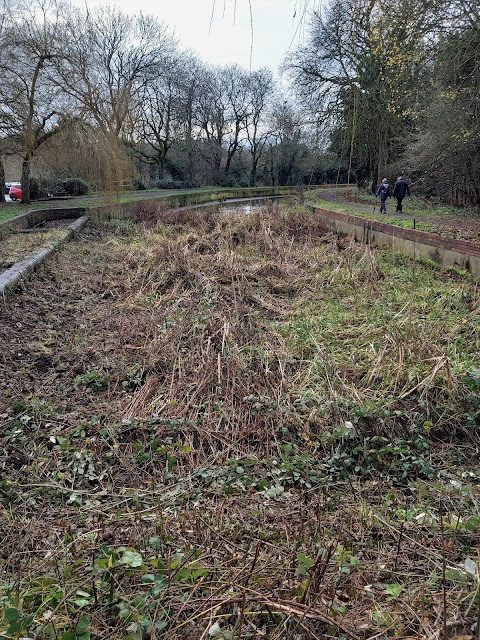 The further on you go the more overgrown it gets, but you can still clearly see where the canal was. 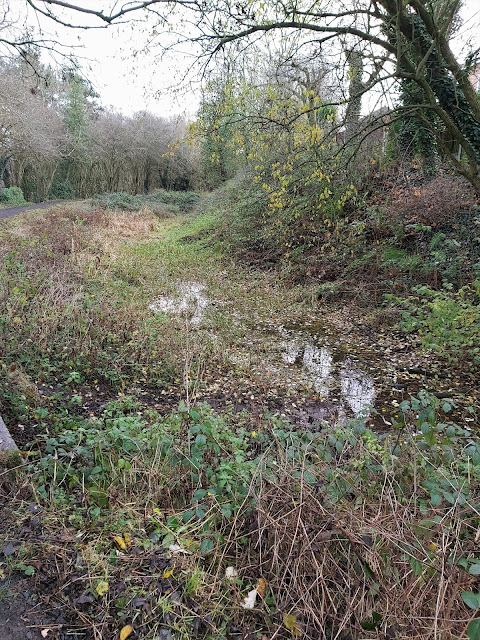 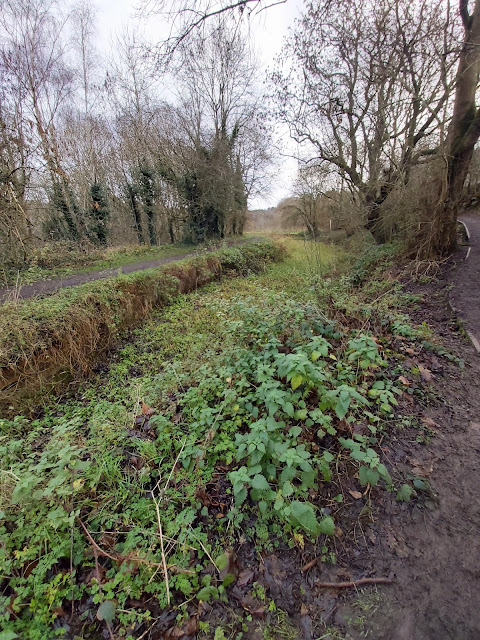 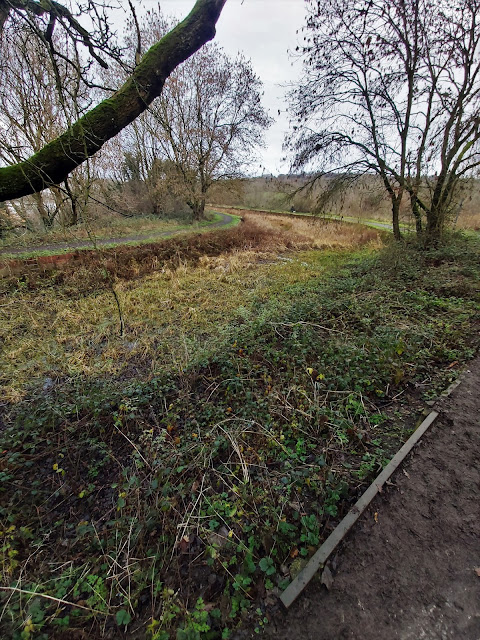 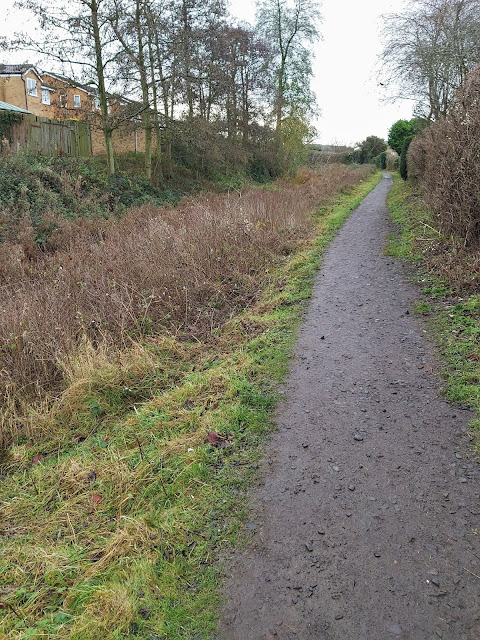 The pathway eventually comes out onto a duel carriage way which must have been built over the canal from what I've read the canal does start up again over the other side of the road way.  There is another interesting walk over that side which I would like to do some other time.
The pathway I followed today was Monarch's Way.  We have seen these signs often, there are two on the next street where we live, and we have often wondered what they were for but it wasn't until I was reading more about Leasowes Park that I found the answer.
Monarch's way is a 615 mile pathway that starts in Worcester and ends in Shoreham-by-sea and is an approximation of the escape route taken by King Charles II in 1651 when he was defeated in the Battle of Worcester.  History, literally on my doorstep :-) Love it! 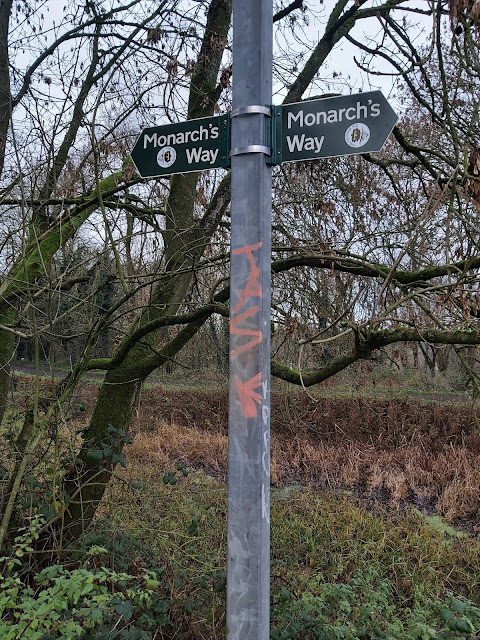 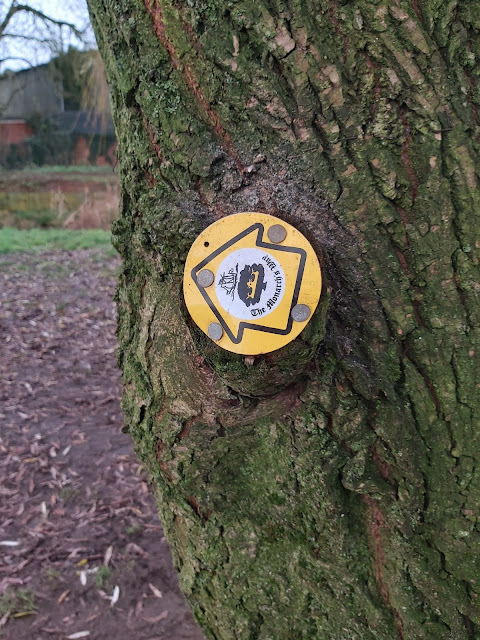 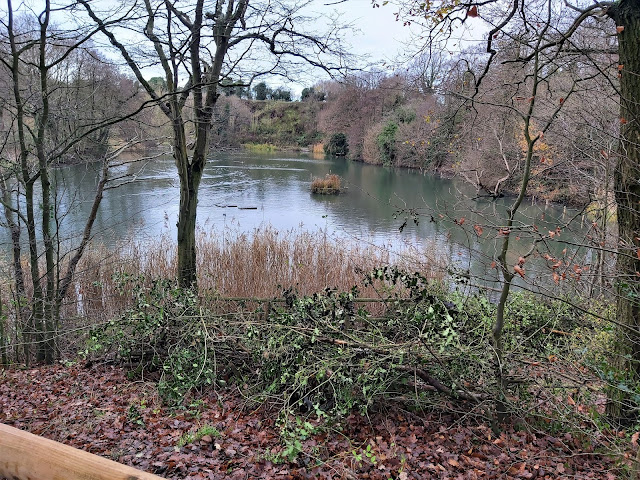 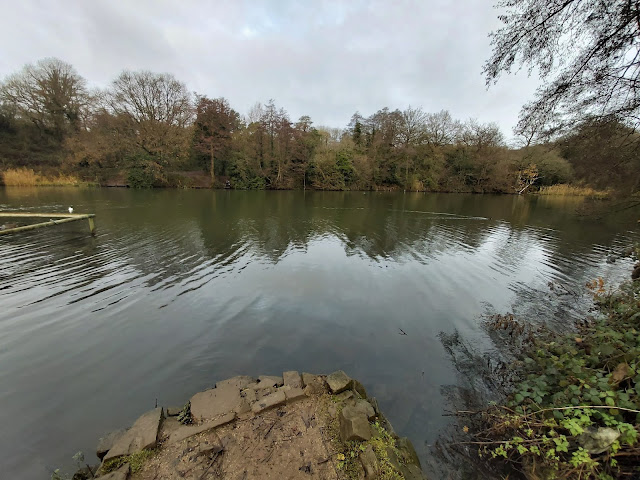 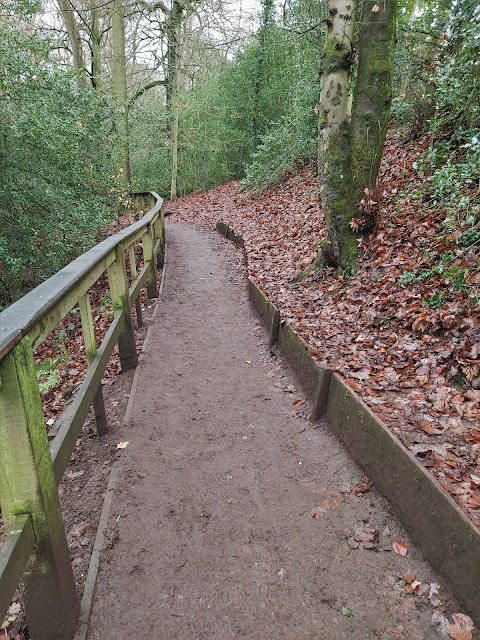 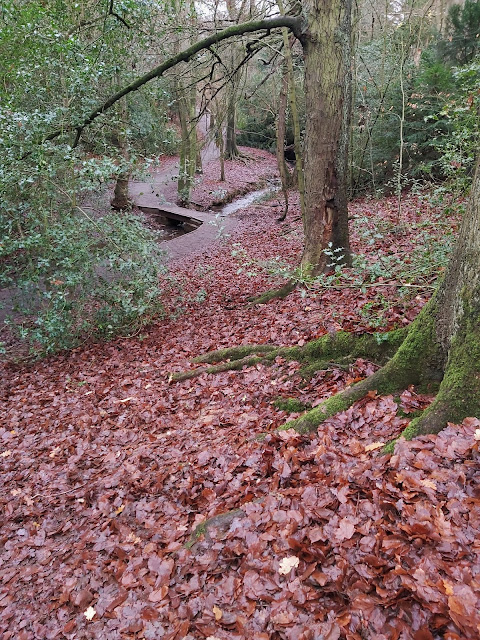 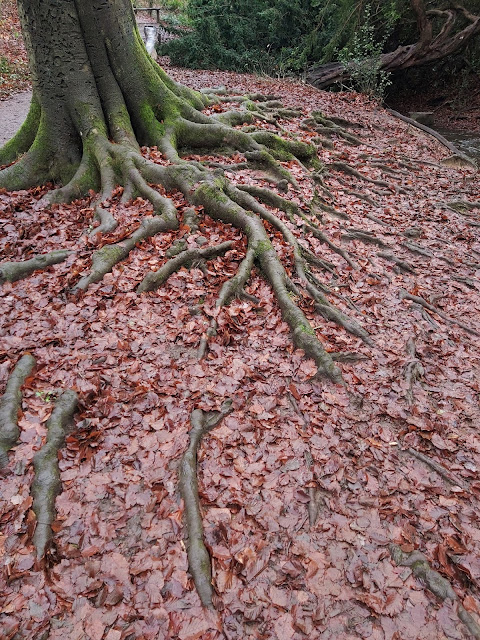 I'm so glad I re-discovered this area again and I'm sure I'll be back there again very soon.
Can you believe we are half way through advent already?  The day's are flying by but nowhere feels very festive despite the decorations in the shops and around town.  I do love opening my little packages each morning though :-)
These are today's gorgeous yarns, I had to smile when I opened the one from Jo, she had included a fox face mask :-)  Thank you Jo, I shall enjoy a relax in the bath with this on :-) 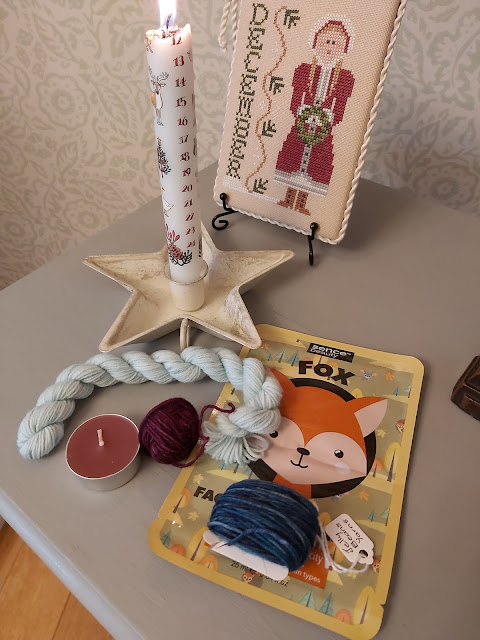 I had to smile when I saw the packaging for your fox face mask. Needless to say I was expecting to see a face mask for wearing outdoors :) I think that possibly says alot about what has become normal during the past year that my first thought wasn't, "oh, a beauty mask".

You do have some lovely places to walk! Your Advent yarns are so pretty!

Another great post .
We have introduced Badgers to our water ways down here to stop flooding .
Love the pictures .
And more fab advents.

A lovely walk what a pity more of the canal hasn't been cleared but I suppose it all comes down to money in the end. I'm really enjoying seeing your advent packages everyday Have a lovely Sunday.x

It's such a shame that places, such as the canal, are left to fall into decline like this, though it's encouraging that a part has been cleared. It would be good if the Lapal Canal Trust can raise enough money to continue the work, especially with so much history in the area. Haha, I'm expecting photos of you when you use the face mask.

What great footpaths you've found, shame about the canal. We have old disused railway lines near here that are good for walking. Years ago Hubby and I visited the house King Charles II hid in before he escaped, presumably on the trail you found - it was Boscobel House, English Heritage.