January always seems to be a good month for me for finishing things.  I think it must be the excitement of a new year and looking forward to all the things I want to make. 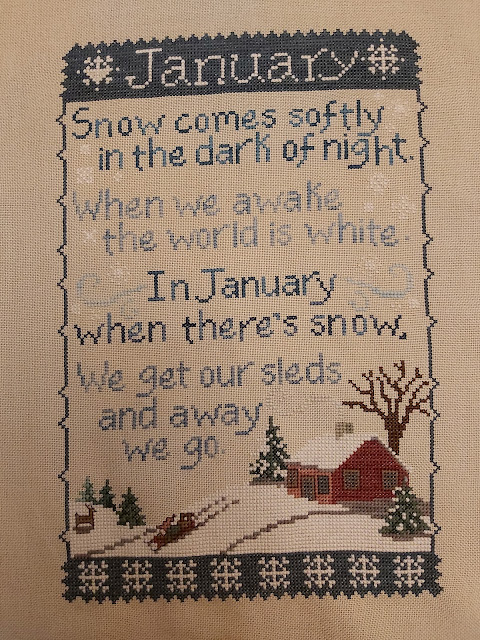 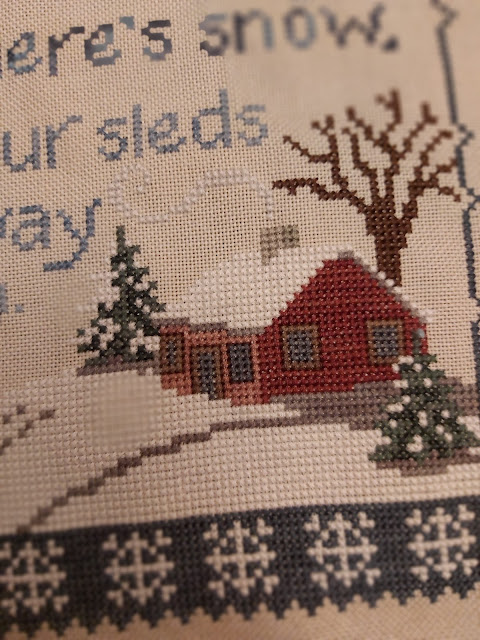 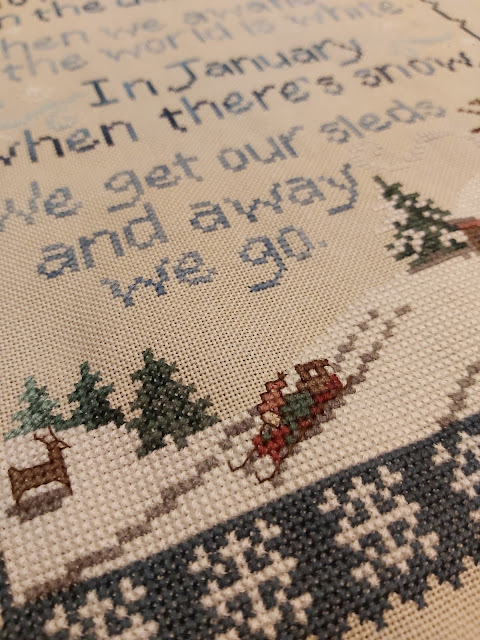 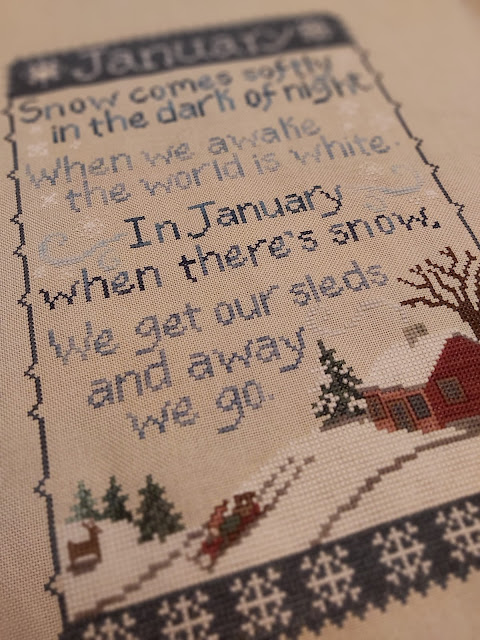 Well, after looking at the photos I realised I missed filling a section of a snowflake in the top border!  You can see what I mean from the first photo.  It has now been filled in but I didn't want to mess with taking more photos.  Good job I noticed, it's not the first time I thought I was all done then notice I wasn't ;-)

This one won't be fully finished until I decide if I want to frame in or make it into a hanging of some sort.  I was going to see if I could find a frame in a charity shop but as they are all closed at the moment that's not an option, I don't want to go to the expense of having it professional framed as it will only be out for four weeks of the year, but as it is now I have almost 12 months to decide as January is at an end.

My next stitching finish is my PS January ornament as part of the 12in21ornamentstitchalong that I mentioned in my last post. 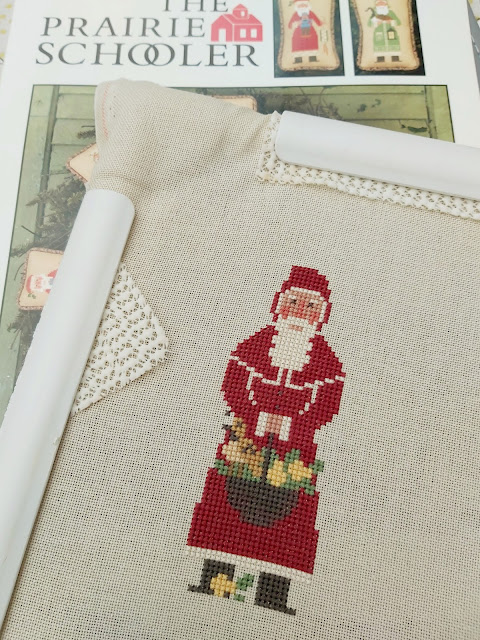 I noticed on Instagram a Year of Dishcloths Pattern Club from The Kitchen Sink Shop.  If you sign up to their news letter you will be sent a dish cloth pattern at the beginning of each month, (but you can find the pattern on Ravelry even if you don't sign up, It's just published a little later in the month).

This is the Icicles Dishcloth 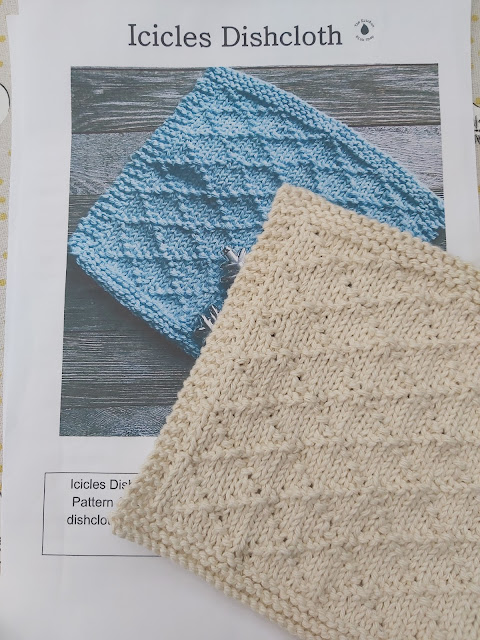 I knitted this out of some left over Hobby Craft cotton.

I just had to share some more snow pictures to end this blog post, we don't get huge amounts of it here in the UK so it's a real novelty when we do.    The snow we had last week lasted until Tuesday and so I'm glad now that when Bonnie came on Monday we took a walk to the park.  It was so pretty everywhere you looked and It was so lovely to see the kids having fun sledding, and just look at that blue sky!

It was a very different picture after Tuesday when the rain came and washed it all away, now it's just wet, miserable and dull grey skies :-(
We were promised some more snow this weekend but it hasn't materialized, yet. 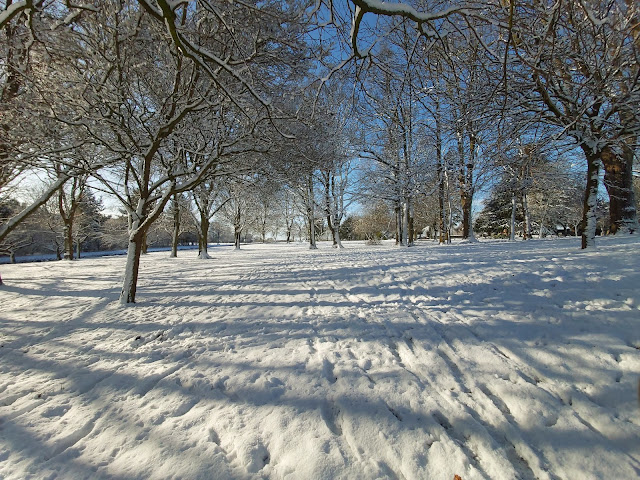 Not many people had tried to get off the estate, the main roads were ok as they had been gritted 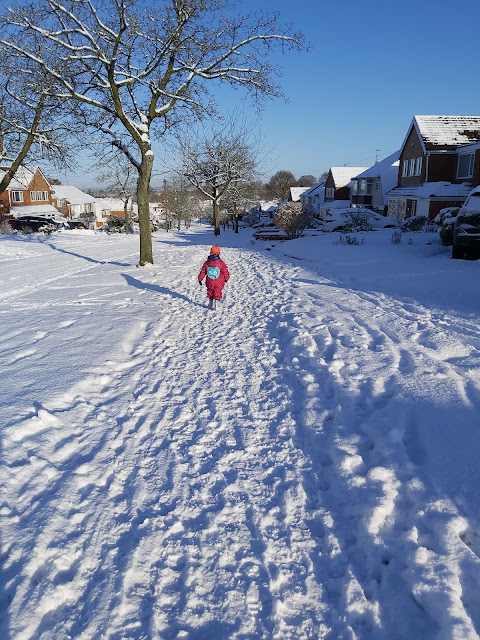 I hope January has been a good month for you and wish you all the best for a lovely February
See you soon
-X-
See you soon...... Maggie

What a cute photo of the little one in the snow! I love those pictures taken from the back while they are walking. I have several of them like that of my sweet grand children. That January piece is so pretty and of course you can't go wrong with a PS Santa. I like that one with the fruit.

Good work on the finishes. That sampler is lovely and so is the Santa.

It looks as if you got quite a bit of snow.

Love your snow - we only had a light dusting here in Devon much to my children's disappointment. I have just cast on the dish cloth - I am not an experienced knitter so could take a while to complete but its something relaxing to do in amongst the home schooling.

The sampler's lovely, I shall look forward to seeing how you decide to finish it. Awww, lovely photos of Bonnie in the snow. We're forecast more snow tomorrow, I hope we don't get much.

Beautiful stitching finishes. I love the sampler.
Have a nice week. Manuela

Lovely stitching, it's good you spotted the missing section, love your santa, I must get my stitching out.
We have had no snow, and our grandson Will is so fed up, but we often go years without snow.

Those snow pictures look beautiful, I love your January Sampler, I would love to make one like it, have you looked in the Range for photo frames or Wilco's? I got one in The Range a while back for one of my embroideries. Your dishcloths are lovely you can never have too many. Have a lovely week.

Little Bonnie sure looks like she is enjoying herself in the snow, Maggie! What gorgeous photos with the bright white against the brilliant blue sky. I'm glad you had snow for at least a while. We got about 8 inches yesterday--so beautiful again :)

Love the January finish and I'm so glad you noticed the missing stitches before getting it framed. I really need to work more seriously on finding a frame for mine--after all, it's been 10 years!

Such a cute PS Santa--that is one I still need to stitch. And your dishcloth is so pretty. Too pretty to use :)

Have a lovely week ahead ♥

What fun snow photos, it is so pretty if cold. Great work on a super finish, good job you spotted the missing bit, I wouldn't have. Your Santa is lovely, good luck with all your ornament stitching

Lovely stitching I love the January stitch .
Looks like you had lots of snow .
Have a fun week .

Lovely photos of the snow. It's horrible when it turns to slush.
Two nice cross stitch projects. I like your dishcloth. I had seen that SAL and was tempted but I'm giving it a miss for now.