Just a catch up

I thought I'd pop a quick post up because the longer you leave it the harder it is to come back, although I haven't got as many people reading or commenting on my posts this last year or so I do still like the idea of blogging and keeping a record of what I'm up to, it's nice to look back on.  I have fallen out of love with IG somewhat and the longer I go without looking on there the more I realise that I wouldn't miss it, plus scrolling through your phone takes up so much time.

I still love reading blogs, for me they are more real than the shiny happy place that is IG, so for now this is the only place I will be posting.

Time is something I've been short on lately. Since mum has been out of hospital it's become apparent that she needs more help.  She has gone downhill these last few weeks and doesn't seem to want to be bothered with anything, where a few months ago she would make a cuppa and warm a meal up in the microwave, now she won't do even that.  There are four of us, I have two sisters, one younger and one older and an older brother, and we are all doing our bit to help but sometimes, as the saying goes, 'too many cooks spoil the broth'  Between myself and my youngest sister we have come up with a rota for next week, fingers crossed it will work without too much fuss, we'll see.  Mum does have a carer to go for an hour in the morning and an hour in the evening to put her to bed, so things should  run ok if we can work together on doing the rest.

I haven't picked up any stitching or knitting in a couple of weeks, when I have managed to sit down I've just not been in the mood, it will still all be there when I have the time or inclination again.

On Monday I took Bonnie to nearby splash park, we only stayed for an hour or so because it's been unusually hot here this week.  We bought some bubbles on the way home and she had just as much fun with those in the garden.  While we were sitting there she was excited to see all birds coming to the feeders too, and I was happy to see the Long Tail Tits back again, I haven't seen them in a while. 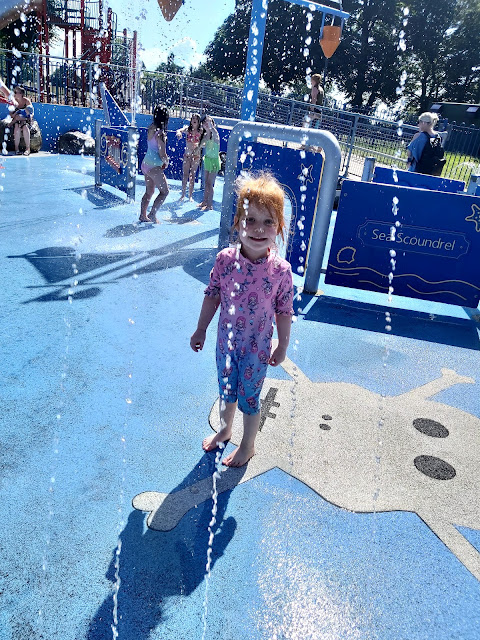 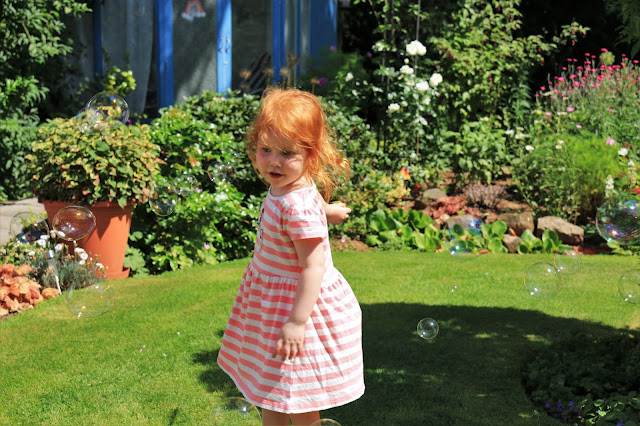 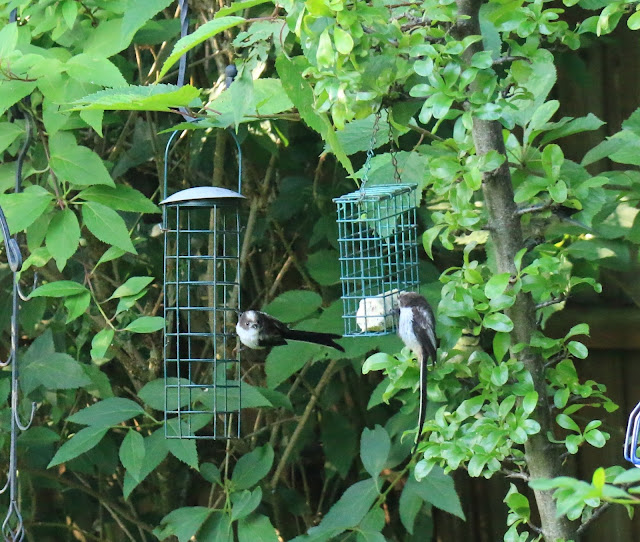 Oliver had a sleepover on Wednesday night and we spent Thursday afternoon playing games and watching tv and I've had Arty for a few hours today while Jenny and Oliver went shopping, he played lovely in the garden watering all my plants for me.
And yes, I did put some hair grips in his hair!  I wish Jenny would take him to get it cut but she say's he makes such a fuss when she takes him that she is waiting until James can take him. 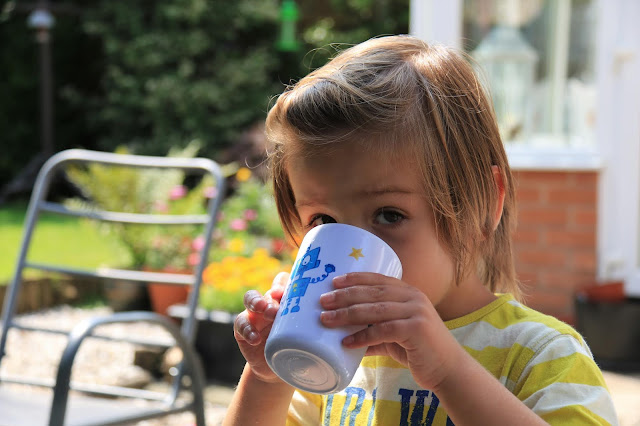 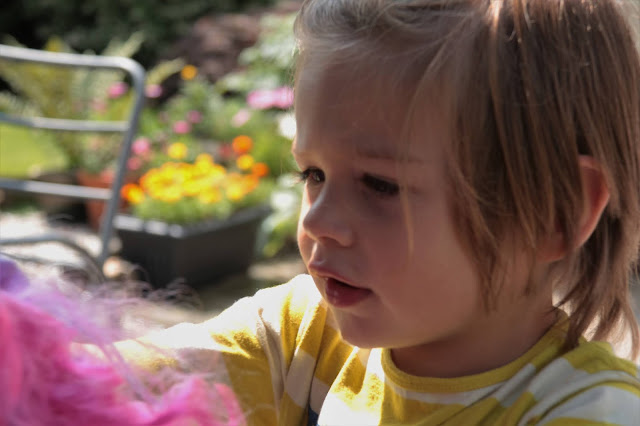 I think in future I'll try to see if I can fit in more regular shorter posts, perhaps that would work better for me.
I hope you have all been making the most of the hot weather here in the UK, (for me that has meant staying indoors for the most part), it's all supposed to change from tomorrow for a while though, the cooler weather will be most welcome.
-X-
See you soon...... Maggie

Haven't visited for ages, so I hope I'm not intruding. Lovely photos, by the way! By 'IG' I assume you mean Instagram? I have been advised for ages to get on this, and this week set myself the task of trying to learn a bit about it. I have always viewed it as a platform for people with a limited attention span but, having looked at it, the quality of some of the material is absolutely stunning. I shall persevere!

Love reading your post from the other side of the world especially now we are in 'hard' lockdown due to Delta strain of COVID. Robyn Sydney Australia

I've had a terrible time with blogging the past year or so, as well. There are really only so many times you can post "got up, had breakfast, went to gym, came home, read a novel" before you just stop. if I did more stitching and gardening I'd have more to post about. Hmm...guess I'll have to do something about that!
I enjoy your posts very much, especially when you've got birds and/or plants in them.

What happy pictures on your post of your little ones .
We now have rain here in Devon after really hot weather .
Sorry to hear about your mom ,it's always so sad to see them losing interest in things . Enjoy your weekend .

I don't think blogging is what it once was, more and more people move over to Instagram and though I'm on there, I don't think you get the connection with people that you do through blogging, or that's my experience anyway. It's so hard as our parents age, they want to hang on to their independence even when it becomes apparent that they can no longer care for themselves and it can certainly cause problems in families when some take on more of the caring role than others. I do hope the rota you've drawn up works for everyone concerned. Lovely to see the children enjoying themselves in the sunshine. Hasn't it been warm, I'm glad to get a bit of a breather now that it's cooled down a little though I hear that the sun's due back again in August for another heatwave, we'll see.

There comes a certain age when things get tough. I went through it when I was looking after my Grandson and trying to look after my Mum as well.
I'm pleased that you Mum is at least in her own home and you are all doing your best.
Hugs
Briony
x

Lovely photo's of your grandchildren, getting their haircut can be a tricky, daughter does Will's herself, he loves his short, George sometimes has my hairdresser or he goes to hubby's barber, he is not happy about either. I prefer blogging, you can add detail and the layout is much better for reading. IG for me is a way to keep in touch with other grandchild who live miles away, it's the same on facebook, though I rarely post on there.

Every time I visit your blog I enjoy once again the lovely Robin at the top ... gives me a special moment before I read your news, thanks for sharing

Oh I am sorry to hear about your Mum, Maggie. I am glad you and your siblings are working together on it though with the care worker. I enjoy the ease of IG so much more I admit. I also admit the true friendships are on blogging to me.

I've read your blog for a while, but just got my account here. I left social media several years ago, and I have missed the "quieter" blogging days before social media became dominant. I hope the veteran bloggers (and new ones like me) will slow down, post when they want, and take the breathers we all need when Life gets busy. Sending good thoughts for you and your sibs and mother--we have been through that here, and it takes time, tact, and patience to get a new rhythm. Go easy on yourself. P.S. Your blog is lovely, no matter when you post.

Lovely to read your blog I too care for my mother but my three siblings are less than helpful so it is quite a burden at times. I do hope your rota works out.

I always enjoy your posts.

I do hope the rota you've worked out works well for you all ... time will tell!
Beautiful photographs of your grandchildren.

Enjoy the new week, the month of August is getting close!

I'm glad you continue to blog, Maggie as I always enjoy reading about your life and family, creations, and garden :) Blogging does take longer (especially when you procrastinate like I do and the post grows way too long!), but I love having a concrete record of things and have often referred to my blog for dates, recipes, etc.

Oh, it's so hard when our loved ones start needing more help. It sounds like you are all nearby which is wonderful. Best of luck to you ♥

I do like blogs so much more. I also like keeping a record of things and the blog is a good way. My mom is declining as well. I am an only child so I envy the fact that you have anyone who can help. I would think getting 4 people on the same track might be hard though. My little grandson's hair was getting quite long too. His dad was just holding him down to get it out of his eyes. He wouldn't go to the barber without a commotion. Last week while staying with us for the new baby to be born, my husband talked him into a barber visit. He was so cute and his parents were pleased. We will see if he is willing to go again:)

You summed up my thoughts perfectly Maggie. I always enjoy reading your blog. It gives more a sense of you, the person, than I feel IG generally does for people.