A beautiful day in October

Today started dull and wet but by mid morning it started to look as though that was clearing so I decided to take a drive to Stourport.  I think I've blogged a few times about Stourport, mainly when I've had children in tow, but today was just for me.
There is a high street at Stourport and a selection of shops, not many, but just enough for locals and after a quick look in a couple of charity shops I made my way to a lovely little cafe which sits right on the edge of the canal.
Considering we are at the end of October we have still been having the odd nice sunny day, and it was warm enough to sit outside and have my coffee, toast and cake.

I've never walked this part of the canal before but after today it's certainly somewhere I'll come back to walk again. 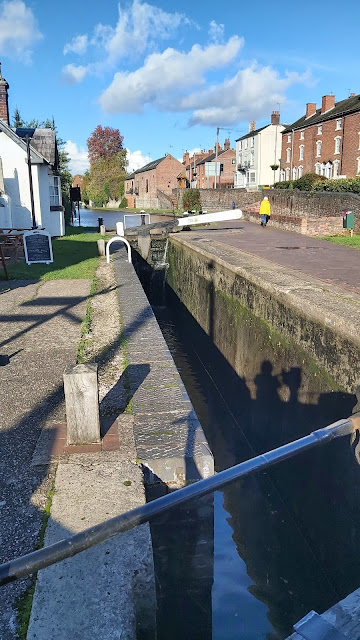 Just a little way past this lock are some canal side apartments and houses and as the canal runs along the back of the high street some of shops and pubs also back onto the canal further along. 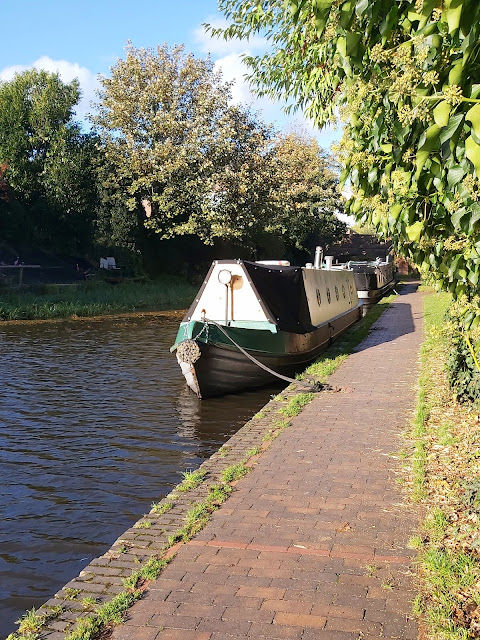 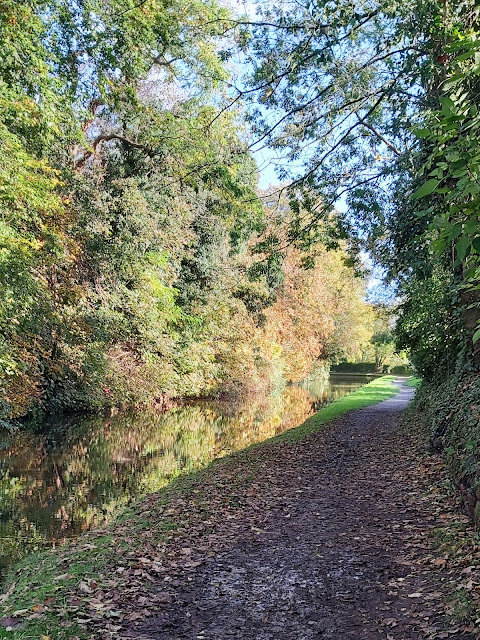 I had walked for about half an hour when it started to get a bit muddy so I decided to go back and see what was over that bridge in the photo above. 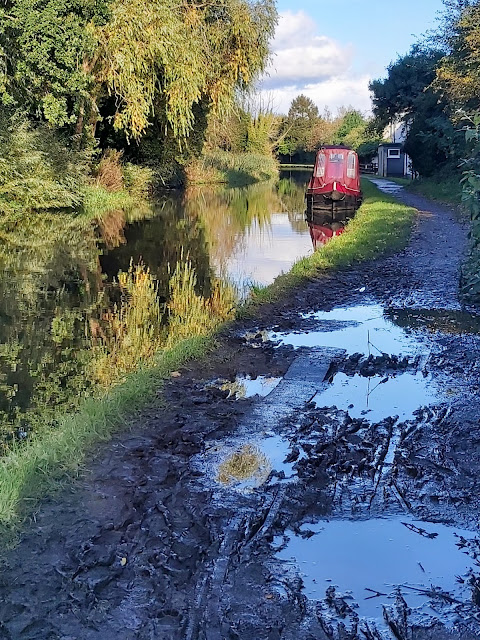 When my daughter, Stevie, saw these photos she said it looked pretty but spooky, there wasn't anyone around but it didn't feel strange or spooky to me, just quiet and peaceful. 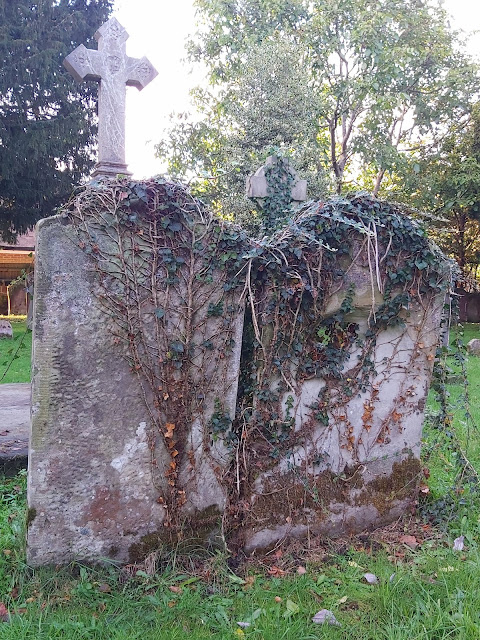 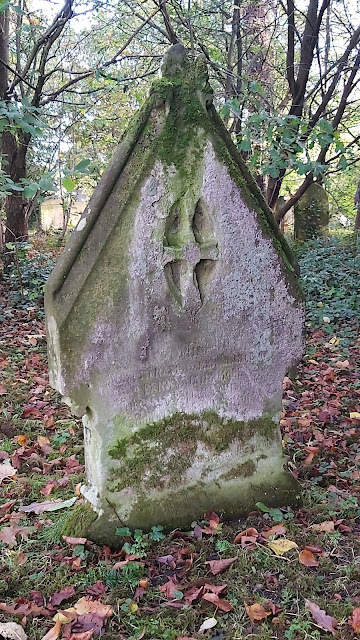 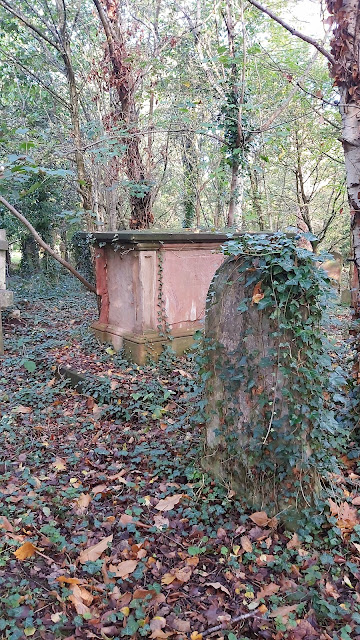 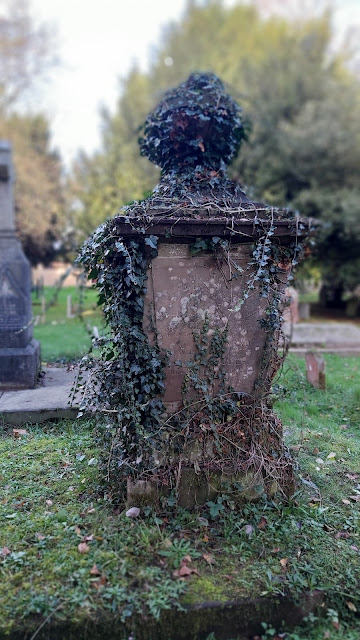 The newer building you can see on the right is the church, St Michael & All Angels, but over the wall I could see a ruin, so of course I had to go and investigate. 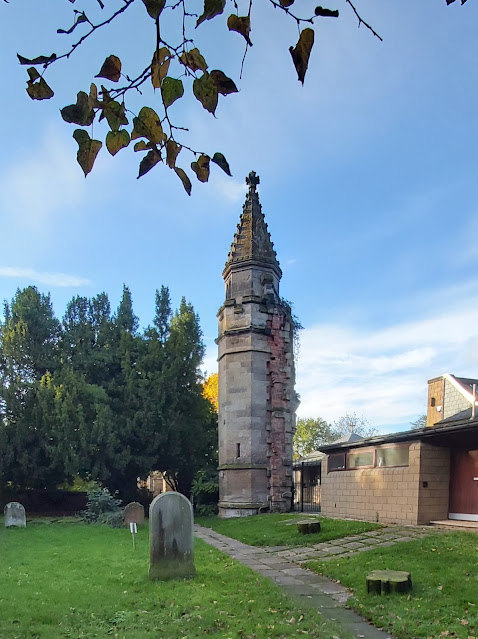 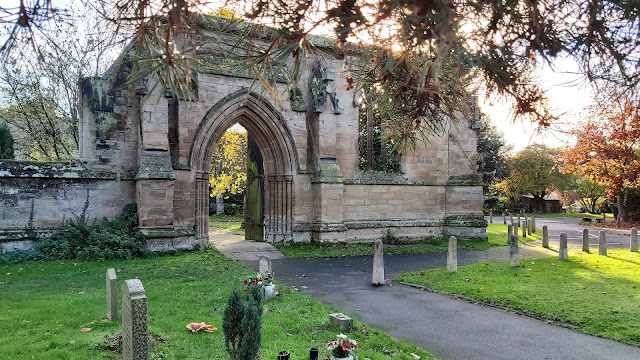 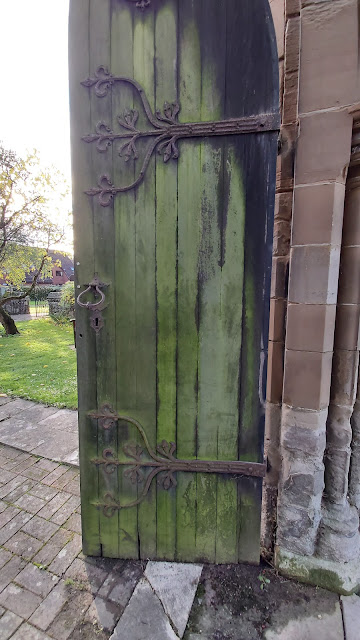 I love how the new church stands inside the ruins but couldn't find any information about the ruins on the site, It isn't the Mitton Chapel because the information sign for that said it was demolished after the 1st world war and only footings remain.
Once I got home this is what I found out about the ruins:
By the end of the 19th century a larger church was needed and In the 1880's work was started by John Oldrid Scott to build the church his grandfather, Sir G. G. Scott designed.  Although the church was consecrated in 1910 the building was never completed.  It was badly damaged in a storm in 1976 and a few years later was mostly demolished to make way for the current church to be built inside the ruins.  The new church, St Michael & All Angels is the fourth one known to have existed on the site.
It's quite an historic site but a sad story for the ruins don't you think?
I really enjoyed getting out in the fresh air, I always seem to find an excuse not to go anywhere but I must make the time and effort, I feel so much better for it.
-X-
See you soon...... Maggie

O Maggie, how I enjoy journeying with you on English
soil...so fraught with history and beautiful sights.
I miss it and you give me a gift with each of your
entries. We lived in the New Forest for a spell and I loved all things Anglo. I have been following with
great interest and prayer the progress the Queen has been making since returning home. In addition to being Queen, she is, indeed, a remarkable soul. Have a good weekend.

Beautiful place to visit and I really like the idea of the new church being built in the center of the ruins. Lovely story.

What a lovely place to visit and toast and cake sounds just perfect. I love churches and gravestones my family think I'm quite morbid but they hold a fascination for me some are so elaborately carved and are quite beautiful, this is definitely a place I would love to visit. Have a peaceful Sunday. xx

What great photos .
So happy you had a nice day for yourself.
Enjoy your Sunday.

Sounds a perfect day in October, our weekend is wet and really windy, our back garden is full of leaves from neighbours garden.

I've been really drawn to canals this last year. I expect it's something to do with watching Giles and Sheila wending their way. When we go to Hebden Bridge again we'll take a boat out for the day. Jean

Thanks for the history lesson and the great photo's. Have a great day. Big hugs Lynda Ruth

What wonderful pictures! I really appreciate the history and the time you take to share with us! So glad you felt well enough to take a day outing for yourself!

Wow-what a beautiful area you are so fortunate to live by. Gorgeous photos that really expressed an Autumn sentiment and the old graves were charming. I always enjoy walking through old cemeteries when I can. Thank you for sharing.

When I see someone's blog, I really like it.

Sometimes it is good to have a day to yourself.
This looks a lovely place for a visit, I enjoyed all of the information and your selection of photographs.

Your photos always make me feel as though I'm seeing snapshots of my favorite British television shows, Maggie! Such beautiful countryside. I love wandering through old cemeteries although we have none as old as yours here in the U.S. Beautiful photos--thank you for sharing! Happy November ♥

That looks like a lovely walk, I always find it really relaxing when walking by water, and a trip to a cafe with toast and cake thrown in is perfect. I think the photos of the old graves looks pretty spooky too, though I have to admit that I love looking round churchyards, I find all the old inscriptions so interesting. I hope we get some more lovely autumn days before winter really sets in.

What a beautiful place!

Thank you for taking up on your lovely stroll. I love how your eye captures the beauty in the over grown and moss covered graves stones and door. Such a pretty place to walk and be with yourself and your thoughts. Both areas look peaceful and nourishing to the soul.