As we are fast approaching Christmas and the end of the year I want to try and get as many of those 'Almost Done' things crossed off my list.

My Dandelion cardigan is now cast off and all that remains to be knit are the button bands.  I knit the sleeves flat so I have those to sew up as well, but the end is in sight.  I've tried it on and i'm pleased to say that it fits!  Can't wait to start wearing it. 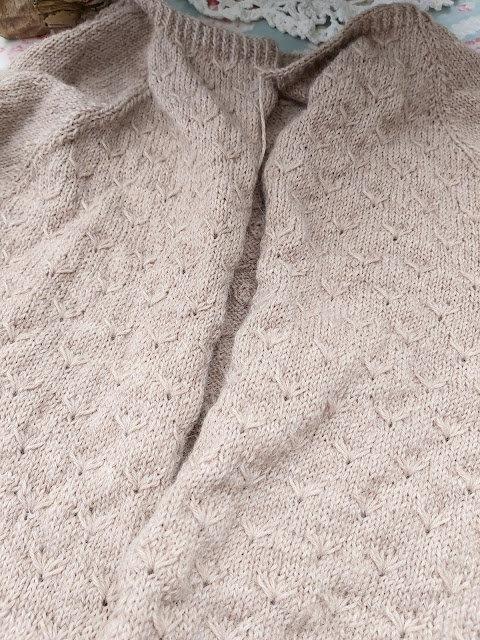 I've been knitting on this cardigan for Jacob on and off for a good few weeks, as it's only garter stitch it's easy to knit on when I only have time to do a few rounds.
Both fronts and sleeves are finished and I'm about half way done on the back, so again, not much left on this on.  I'll probably knit on this Wednesday and Thursday when I'm at Jenny's. 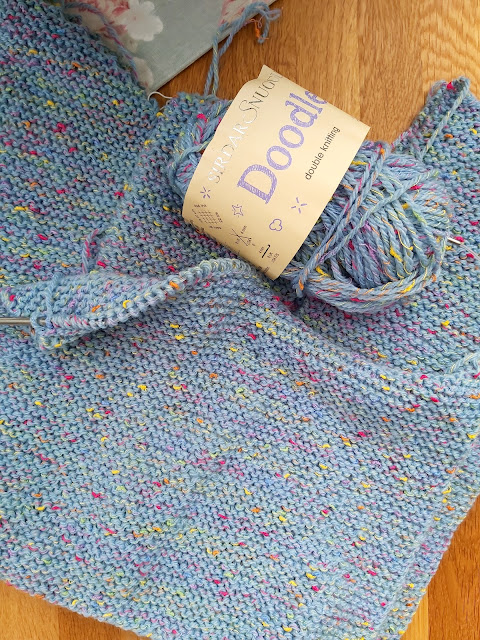 Once I'd finished making my Quaker Drum last week I pulled out my Autumn Dream hoping to get it finished in the week.  Unfortunately there was more left to stitch than I thought there was and It's not done, but it's not far off.  It would be nice to get this one finished so it has a few weeks on show in the right season. 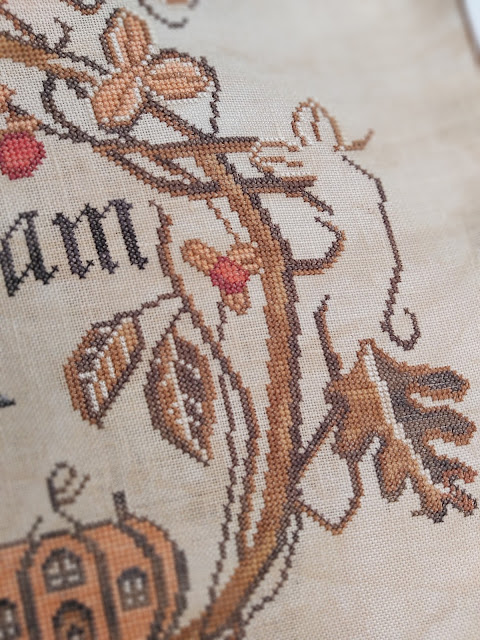 I do have some other things that are 'Almost Done' but these are the ones i'm focusing on at the moment, once they are finished I will choose others to work on.
~~~~~~~~~~~~~~~
On Friday Stevie and Darren went to London to see a show, they were only staying overnight but she didn't want their cat, Ralph, to be on his own all night, he'd never been left overnight so she asked if I would have a sleep over at theirs to mind him, so of course, that's what I did.
Isn't he a handsome boy? 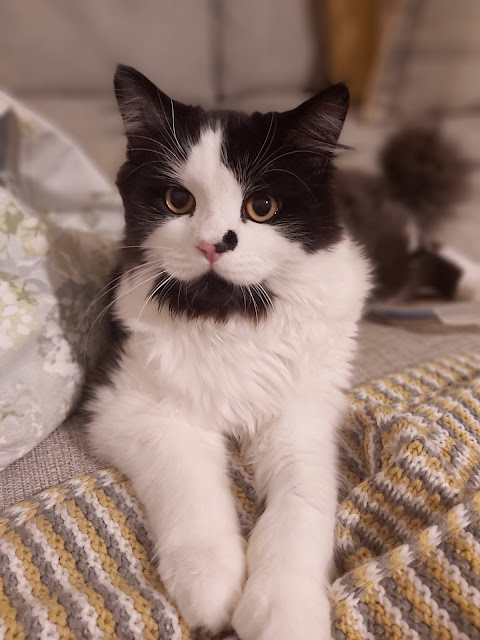 He plays catch like a dog, he spent ages with this piece of silver foil, I threw it, he ran and fetched it and bought it back to me to throw again.  My cats are old ladies now and you forget just how playful kittens are. 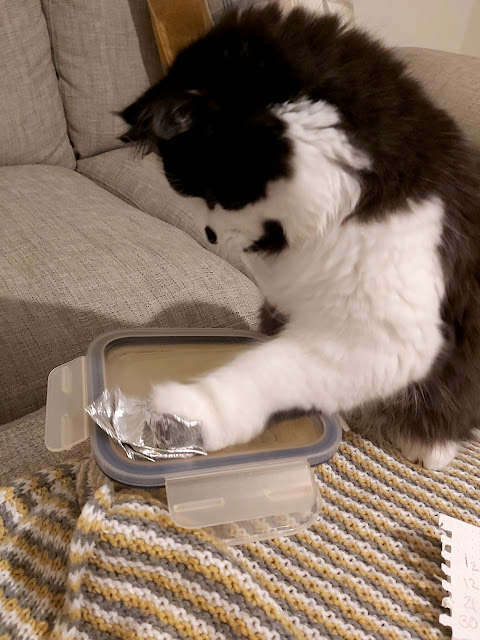 ~~~~~~~~~~~~~
Also on Friday Joanne, my middle daughter, called to say she had done a lateral flow test at home and it was positive.
Joanne, Gavin and the children all went for a PCR test that night and only Joanne's came back positive the next day, so she is currently confined to her bedroom.  She said she feels rough but better today than she did yesterday and in the night, she has spoken to a doctor by calling 111 and he has reassured her and told her that if she feels she wants to she can go to the walk in centre and someone will see her.   Hopefully the worst has passed now and she will start to feel better, I think she said they are all having to isolate until October 12th, I'm not sure what the rules are now but the children can't go to school or nursery anyway because of Gavin isolating too.
Autumn has well and truly arrived here, we even had the heating on for a while last night, not that I mind, I quite like the cooler weather.   The rain keeps coming though, It's certainly making up for the dry September we had!
-X-
See you soon...... Maggie

Love the kitten, hope all your family gets better soon. big hugs to you all Lynda Ruth

Love your projects, it's always a blessing when something you finish fits. I'm busy with Christmas gifts.

I love the cardigan .Would you share the pattern please.
I think we are being hoodwinked into thinking the pandemic is over.It is rife in secondary schools and those pupils are taking it home and spreading it.We are not out of the woods yet.

Ralph is definitely a handsome boy! :)

Your projects are looking good.

I did like the pictures of Ralph - so sweet.

Hope Joanne continues to feel better soon, Covid is still very much around!

Take care, have a good week.

What a cute kitten. I love the way they will play with a bag or small crumpled up piece of paper.

I do hope Joanne does well and the rest of the family does not come down with the virus.

Love all your knitting , makes me want to pick up my needles .
What a cute kitten ,looks like my old cat Candy .
Hope your family get well soon.
Take care .

I'm sorry to hear that Joanne has tested positive, I hope she's not too poorly and that the rest of the family stay well. Awww, Ralph is a very handsome boy. We used to have a cat called Jake and he would do exactly the same thing with bits of rolled up silver paper, he was just like a dog playing fetch. You're not too far off finishing all three projects so you should get those done soon. It's a good feeling to get some projects wrapped up and make way for some new ones.

Well Ralph is certainly a treat! Our Cally is very afraid of foil. I am so sorry to hear of Joanne being positive. I do so hope everyone is able to stay well??

oh no, not good getting this covid. Hope they feel better soon. I too have hunted out some cross stitch to do. Will be showing it later in the week.

Ralph is a cutie! Hope your daughter recovers well and the rest of the fam doesn't get it! I sure admire your knitting skills, that cardigan is awesome:))

I liked the knitting, the garter stitch cardigan- can you share the pattern source?

I really liked the wool you had used too.

I just found your blog and ejoy it.