A little stitching, a little knitting and meeting a favourite author

One of my aims this year was to keep up with blogging once a week, I was aiming for the same day each week, I'm afraid I'm failing at that already, but I have been stitching, crocheting and knitting more so I suppose that's ok.

I found this little Christmas freebie on FB and liked the simplicity of it,

Just a little bit more stitching to do so i'm hoping to get this made up before the end of the month.
I've also been working on a February design for my mantle but as we are so close to February i will save that for another post.

My little pink blanket just needs the other side boarder knitted up.
Actually, i'm not too keen on this moss stitch boarder, I wish I had done something other than moss stitch, it looks a bit loose compared to the rest of the blanket to me, perhaps it will be better when it's washed? 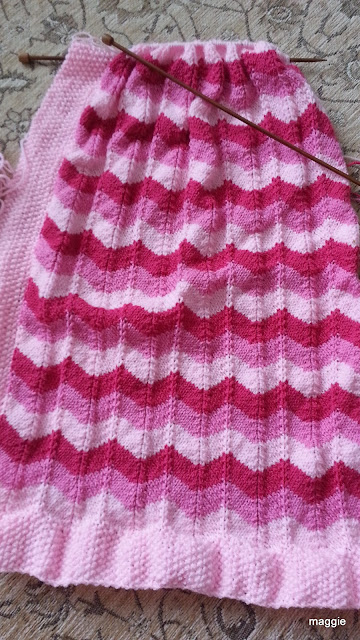 This weekend was our first reading group meeting of the year.  I was really looking forward to it because we had an author visit.  The author was Angela Marsons, she lives locally and writes crime novels set in the Black Country.  Rachel the librarian who runs our reading group recommended her some time ago and it was a month or so before i remembered and went in search of her books and, of course her name kept cropping up at each meeting, soon between us we had got everyone else in the group interested!
It has taken over 20 years for Angela to get her work noticed, time after time her work was rejected as being 'ok,' but not quite good enough.  She had more or less given up when Bookouture contacted her and said they wanted to publish her books, she was then signed up for a 4 book deal, (that is now turned into an 8 book deal).

She has also recently secured a print deal for the first 3 books, so they will be hitting the shops latter in the year, but she is still staying with Bookouture as well.

Her books are here on Amazon, if you are interested, and where you can read a bit more about her too.
She also has two other books which are stand alone books, nothing to do with the Kim Stone novels, these are also on Amazon, I haven't read them, but they are on my reading list for this year.
She is such a lovely person, unassuming and totally blown away with the success and attention she is getting now and from hearing her speak on Saturday she will remain loyal to Bookouture and her feet will stay firmly on the ground, her words were, her family will always come first, in particular her partner, for whom she is also the main carerer.   But now she is living her dream of being able to write full time.

Her sales for Silent Scream have already hit over one million and it has been released in Italy and due to be released in Germany too!

Don't you just love it when something like this happens to a nice person?

And....It's one in the eye for all those who rejected her writing for all these years...Like Julia Roberts said in Pretty Woman...Big mistake.  Big.  Huge.

Have a great week all!

So pleased your local lady has been recognised, wonderful for her, i'll look out for her books.
Love your new little chart, shame I don't do FB.

that's so nice for her. I should see about getting a local author to attend our book club meeting..........great idea.

I just checked and our local library in Northern California has an e-book version of Silent Scream so I've added it to my wishlist for reading this spring. How great to have met her!

Thanks so much for suggesting the books. I am always looking for a good book and I appreciate any ideas. Your little Christmas design is going to be very pretty. I am trying to do one PS Santa a month so I will be stitching Christmas in July!

Thank you for the introduction to a new author. Crime novels set in the UK=my favourite!

Love your pink blanket and I do like the moss stitch border .
Great stitching too.
And it is good to see some one doing well hope she does well .

beautiful new start on the christmas design, it is on my list too to stitch the piece.
Such lovely bright colour of the blanket, love it.

A lovely little Christmas piece that you are stitching. And Ilove the colors of your blanket. A lot.
Thanks for introducing us to a new author. Her books sound very interesting and I will certainly order the first in that series.

I like your Christmas design. Simplicity can be so beautiful. Lovely to read about your local author. I will have to go and check out her books now.

Beautiful Christmas stitching, and I think your blanket looks amazing!

Love the pink blanket and I will keep an eye out for those books they sound good.

Beautiful both the cross stitch and the blanket and enjoy the reading group!
Ciao,
Miriam from Italy

Your Stitching Progress is so great....love the colors. I also love your Knitted Blanket too...wow...that is sure pretty. I wish I could Knit but I can't. I can crochet but I cannot Knit. Happy Stitching....Happy Knitting....Happy Reading....

That was such a lovely story, well done her for not giving up and one in the eye for the ones who rejected her. They look like my kind of books, so I'll go have a forage in Amazon xx

beautiful Christmas piece, thanks for the book tip

It's always nice when a local person is recognised for their work - I love your Christmas stitching :-)