Making the most of the sunshine

The weather has taken a turn for the better and the outdoor work has begun.  Mark turned over the boarders a few weeks ago and last week I bagged up the rest of the leaves so it's looking pretty tidy out there at the moment.  The grass hasn't had it's first cut yet, I'm hoping that It will be good for another couple of weeks

The large pieris is in flower so should turn red in the next week or two.  After it has done it's thing this year we are going to cut it back, it's over six feet tall now and almost as wide, I just hope we don't damage it in the process. 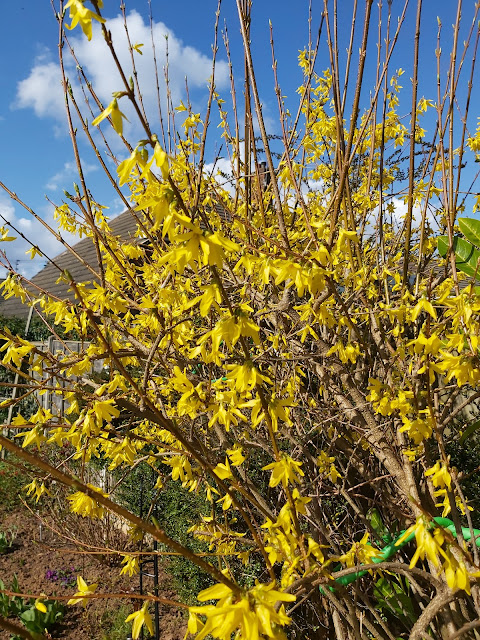 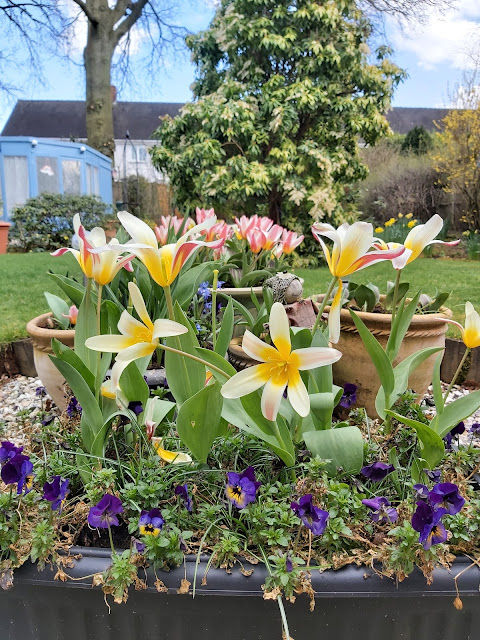 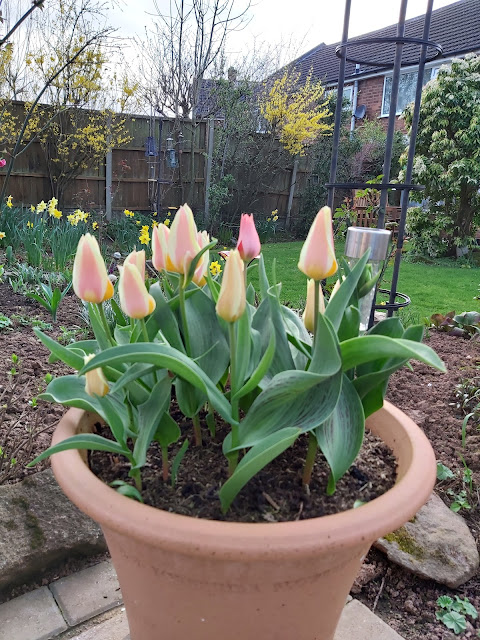 The camellia has loads of buds, hopefully now the sunshine has made an appearance, so will the flowers. 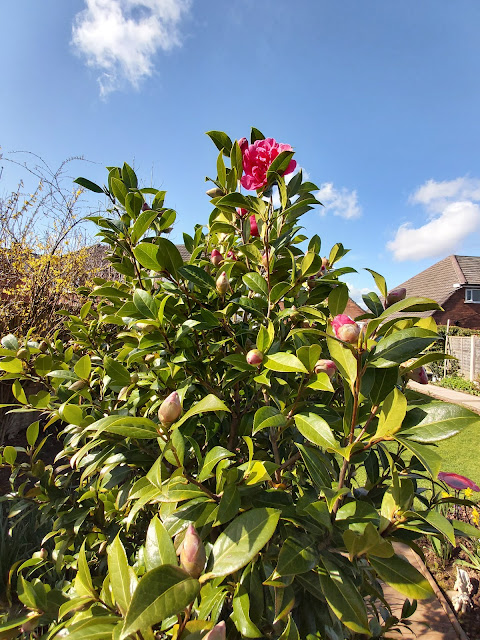 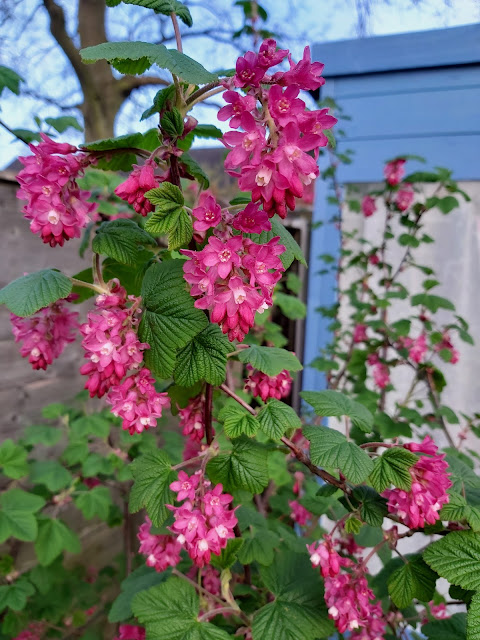 Yesterday was beautiful so instead of the local park I took Bonnie to Witley Court, It's one of my favourite places and I've shared many photos of before, here and here, if your interested.
Yesterday there was an Easter trail for the kids so we packed a picnic and went off for the day. 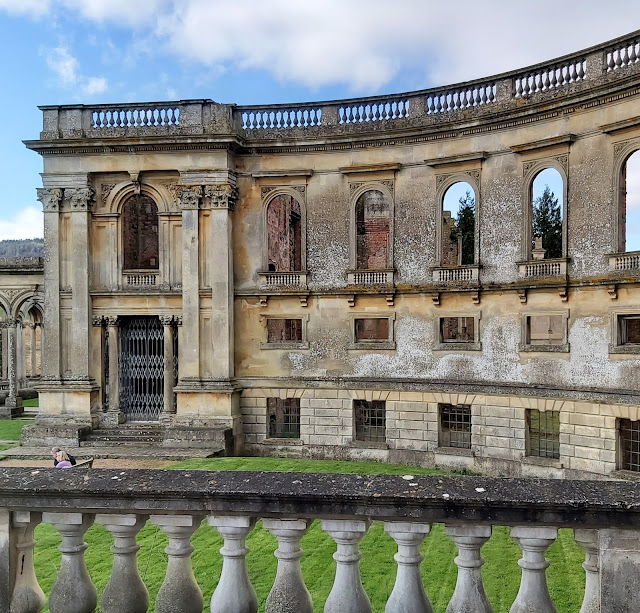 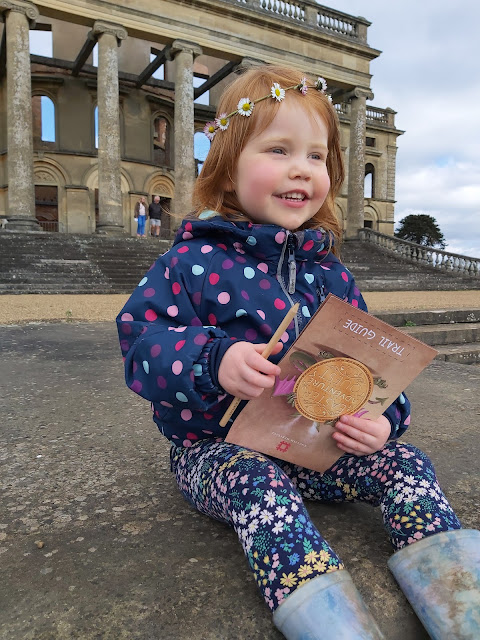 On Saturday I went for my Covid vaccination.  I don't mind saying that I've ummed and ahhed about having this vaccine for a while.  I said to Mark that I'd quite happily stay at home for the duration, but we know that not realistically an option.  They say that no one will be forced to have it, but with all the talk of green cards and not being able to travel we are, sort of.
I was dreading having any of the side effects people have mentioned, although, Mark didn't have a single one I knew in my mind that I would.  I had the injection early Saturday morning, It did sting for a few minutes after but then I was fine all day.  Just before I went up to bed I got the chills, much like when you are coming down with a cold, but felt ok, then in early hours I woke up and was boiling hot, I got up for a drink and took some paracetamol, I felt really awful but went back to sleep ok and woke up fine.  I was ok again all day but by 7pm I was so tired I had to go to bed. I've been back to my normal self yesterday and today, although the injection site is quite sore to touch and a little bit red.
It's been another beautiful day here, I haven't been anywhere today, I've had a play date with my new sewing machine, Tuesday is the only full day I get to do what I want to do without interruptions.
The clocks went forward on Saturday so now we have lighter nights, I have to confess that I'm not a fan of lighter nights, I much prefer it to get dark earlier, then I know it's time to stop, there is a tendency to keep going if it's light and before you know it it's bed time 😂
I hope you have been enjoying the sunshine anyway, I think the rest of the week is predicted to be much of the same.
-X-
See you soon...... Maggie

I have not had my vaccine shot yet. I can't have the Zenac because of blood cloths so waiting for something else. Love all your photo's/ have a nice day big hugs

Beautiful flower pictures..really love spring season cause of all the different flowers allround.
Sorry to hear about the side effects of the vaccine. I do hear lots had not a fine experience with it.
The

The clocks went backward for us last saturday and i thought it's the same with you out there.

Lovely pictures of your garden and your grand daughter is beautiful - such a lovely age.
I was like you about the vaccine - months ago I said I didn't want it and wasn't going to be forced to, but we like to go to France with our caravan several times a year so basically I didn't really have any choice. I felt pretty rough after having it like you. I'm hoping the second dose won't affect me in the same way.

I love this weather we are outside in our garden much more, and walks are much longer. I still get sewing time in the evening.

Lovely garden photos .what lovely weather we are having .
Your little one looks like she had a fab day .
I was find with my vaccine hubby just felt a little tired .
But if it saves our lives well worth it.

Your garden is looking lovely with everything coming into flower, the lovely weather we're having at the moment will be helping them along. How lovely that you have days out with Bonnie, she'll treasure these times when she's older and looks back at the things you did together when she was so young. It always looks like you have a lot of fun with her. I'm glad to hear that your vaccine side effects weren't too bad, I hear they can be worse with the second jab so I'm not looking forward to going for that but it's better than the alternative. I love the lighter nights, I always find the day's over too quickly during the winter months, it's nice to be able to get out for a walk in the evening now that the clocks have gone forward.

Harvey got his first shot today. I get mine in 10 days. So looking forward to being able to get out and about once again even though it takes two shots to be absolutely sure.

Lovely photos of your garden, spring is certainly on the way. Flu-like symptoms seem to affect t some after the vaccine, I'm glad you're feeling better now.

I hope you're feeling better now. I think a regular day to yourself with your crafting is a good idea. The warmer weather has been welcome. I'm glad I made the most of it as today the temperature has dropped and it's cloudy. It sounds as if the time out and about with your granddaughter went well. An Easter trail activity must have been enjoyable.

Your yard and flowers look wonderful. I spent this afternoon tidying up my garden! Bonnie is so cute. What a fun day!

Your garden is looking lovely.
What a nice outing with your grand=daughter that is such a sweet photograph of her.
Pleased you had your first vaccination and you are now feeling better.