I only ever knew one of my Grandparents, my Granny Cox, dad's mum.  I have a very vague recollection of my Granddad Cox, sitting on his chair in the corner of the kitchen, but can't remember any more of him than that.

My Granny's name was Cissie and when I was young I spent lots of time with her, I always spent the weekend with her, not because I had to but because I wanted to.   She let me help her around the house and do little jobs for her and she was always patient and very appreciative, telling me I'd done a wonderful job.  If ever I didn't turn up at home after school mum knew that I'd be at Grans.

In the afternoon she always went for a lie down and sometimes I would sneak in and lay the table with tea and cake, (there was always fruit cake in a tin in the pantry), then go and wake her and tell her I'd laid the table for tea.  I never felt in the way or that I was doing something I shouldn't or doing it wrong, I hope I was never too much of a hindrance.


When you're young you just don't appreciate how hard it was back in the day, but  as I've got older I realise how awful it must have been for her.  She had 3 sons, my dad was the youngest, Uncle Jack, who's real name was Elijah John was the oldest and Uncle Ralph in the middle.  Both my uncles fought in WWII, Uncle Ralph was in the Middle East, Uncle Jack was in Singapore when it was taken, and was captured and was put on one of the so called Hell Ships as a prisoner. He was a Japanese Prisoner for the rest of the War, working in (we think the salt mines.  I have a few details of the camp he was in and his release papers).  There was a time during the war when my Granny and  Granddad didn't know if their two sons were dead or alive, like thousands of other parents.


My dad was in a reserved occupation but wanted to enlist never the less, but, he had an overlapping toe and none of the forces would take him except for the Navy but he must have his overlapping toe amputated first.  The legal age for anything then was 21, and as he was under-age had to have his parents consent, which my Gran refused, saying that she didn't know where two of her sons were and she wasn't going to sign for my dad to go as well.


Both my Uncles came back from the War but it had already done it's damage.  Uncle Jack who was well over six feet tall came back weighing a mere 6 stone, he married and had a son but he died aged just 34.  Uncle Ralph also married but divorced, there were no children, sadly he to died in his early 50's .  This is not the way things should happen, my Gran must have carried that heartache around with her every day, yet she was never angry, not outwardly anyway.


I was around 13 when my Gran died, she had a stroke one Saturday night while we were watching TV.  I'm glad I was there and that she was not alone.


So, Granny's China Cabinet.  It always sat in the same spot in her living room with various bits and bobs in, including a china tea set of course, in those days people didn't swap and change furniture all the time, they looked after what they had, and the cabinet was polished and loved.
After Gran died my eldest sister had a lot of her things, the cabinet being one of them, but for the past, oh, I don't know how many years the cabinet has been sitting in her garage and when she had a recent clear-out she was going to throw it away.

Considering how old it is it wasn't in bad condition really.

The back board was a different matter, this had definitely seen better days

I couldn't let it be thrown away, so took it back home and gave it a new lease of life. 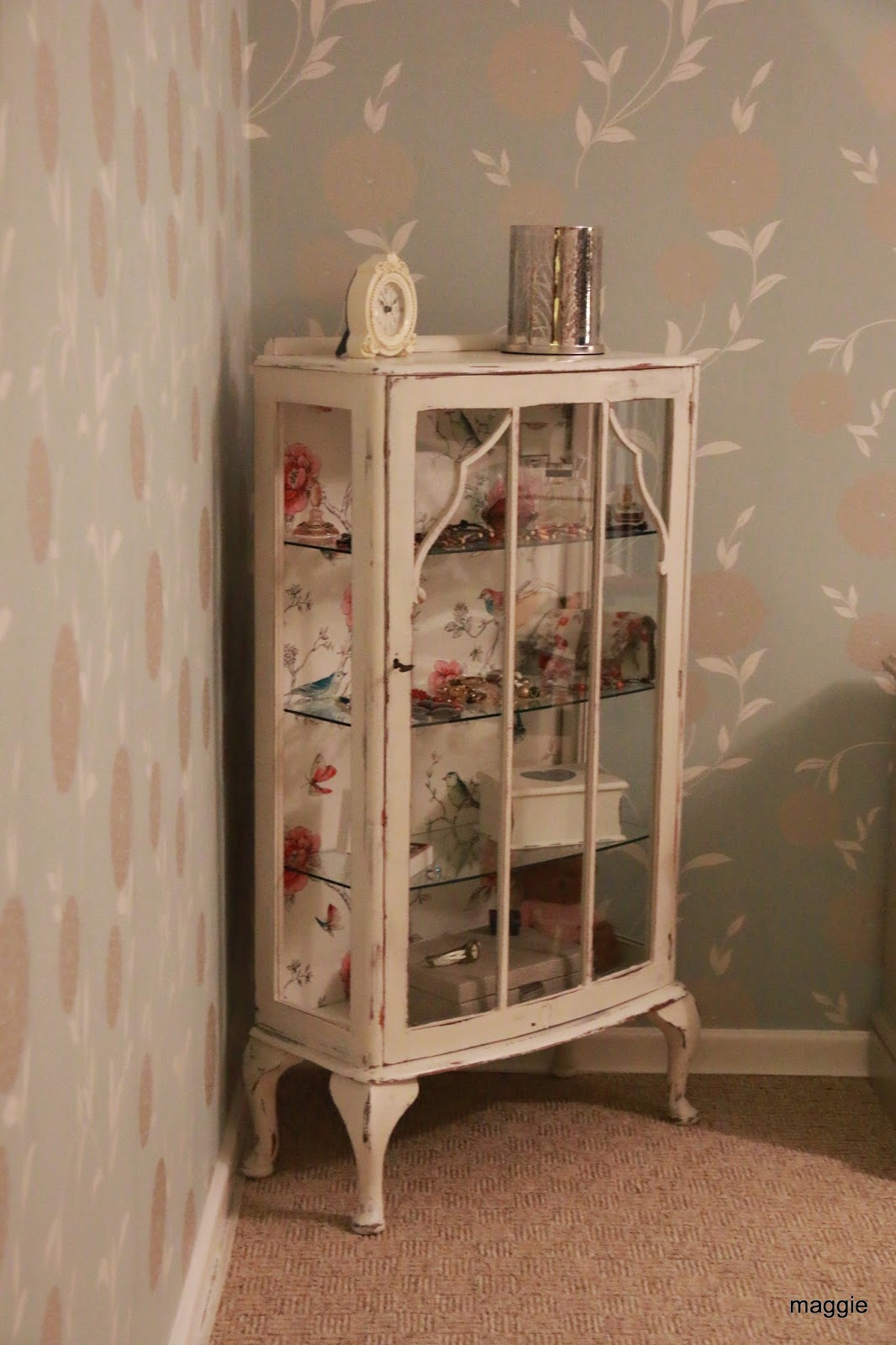 It's now in my bedroom with my treasures inside.

Sitting in the corner looking like it has always belonged there.

And I've got something to remind me of my Gran, who just wasn't around long enough.

Thank you for letting me share a little of my Granny's story and, If you are watching Gran, I hope you like what I've done :-)

ps. For those who are interested  the cabinet is painted by me using Annie Slone chalk paint, waxed and then distressed.
See you soon...... Maggie 13 comments: