January, it was good

I always seem to start the year off well with making things, there is something about January that makes me feel positive, something to do with new year goals I suppose.  Lets hope I can make the it last for more than just a month :-)

After my tidy up / sort out in my crafty space I realised I have quite a lot of acrylic yarn, not really enough of any one colour to make anything but paired together I will be able to make up some little blankets.  This one has already gone to it's new home 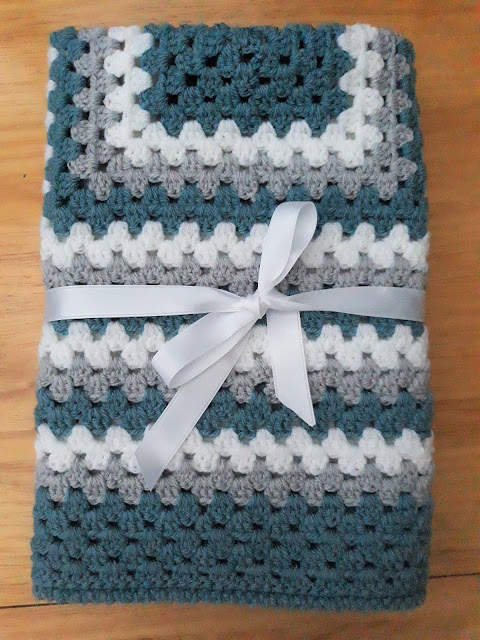 I have not idea why I have so much Stylecraft in yellow, on it's own it's a bit bright, but put with white I think it looks really fresh and clean. 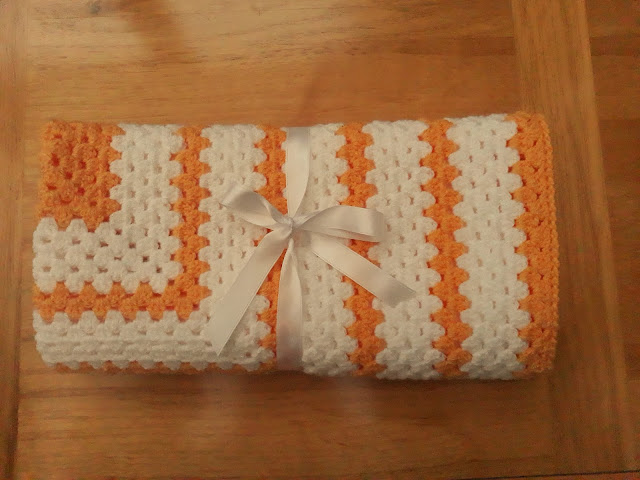 I bought this little octopus kit from the Cotton Pod when we went to Yarndale last September.
It only took a night to make but, those sleepy eyes! oh my goodness, I think I stitched them on at least six times!  Finally I got them so I was happy :-)

He has gone to live with Oliver, who, I'm happy to say still loves his stuffed animals and teddy's 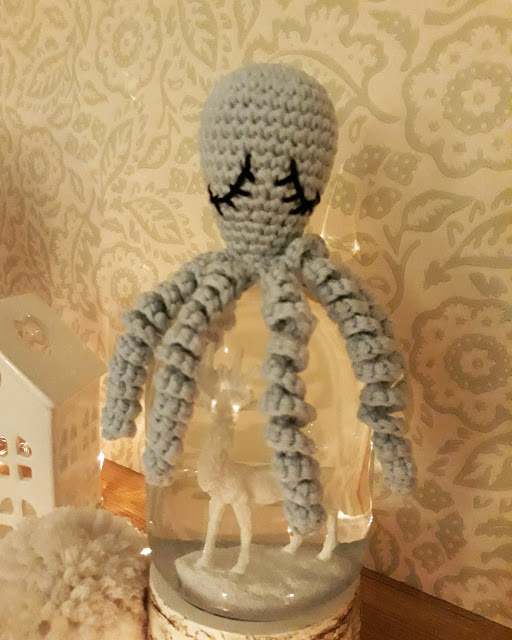 I finished my first ornament of the year.  You might remember I'm stitching monthly ornaments along with some friends on a small FB group we have going.  I'm going to wait and do the actual finishing  when I have a few to do. 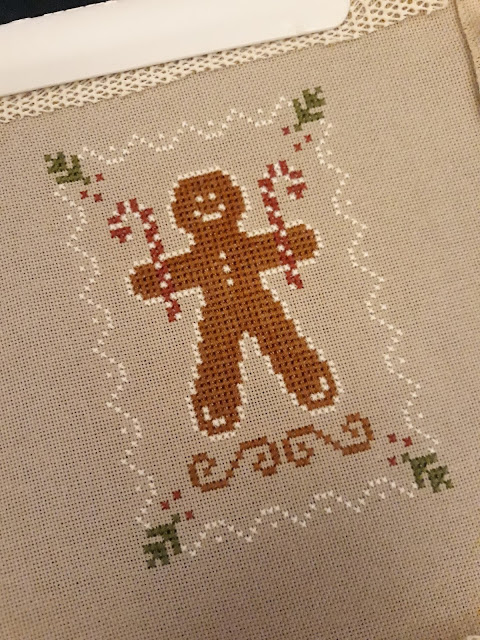 My second stitched finish was only finished tonight and I couldn't wait to show it to you even though it's still on the Q snap!

I had wanted to get it all done by the end of January, and I have, by the kin of my teeth, lol.

I'm still not overly keen on stitching on linen, I don't like the unevenness when stitching so I'm glad it's done if i'm honest.  It has a few 'personal design features', but on the whole I'm happy. 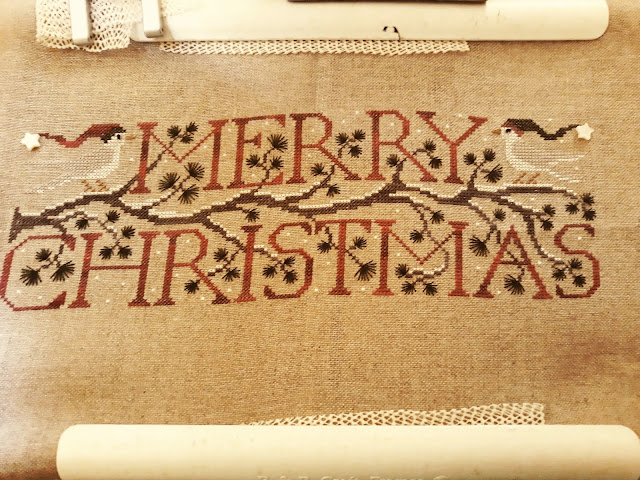 January has also been a good month for reading.
Towards the latter part of last year I didn't read as much as I would have liked and I missed having my nose in a good book.
This month I read 3 books on my Kindle and listened to 3 audio books
My favourite for the month was The Friend.
My least favourite was The Hitchhikers Guide To The Galaxy 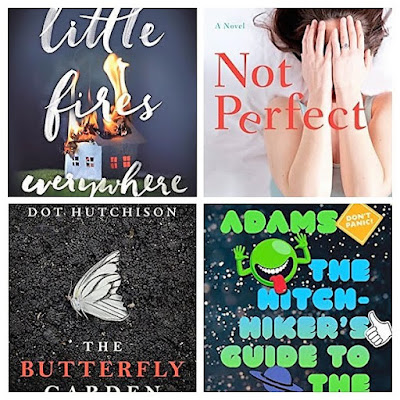 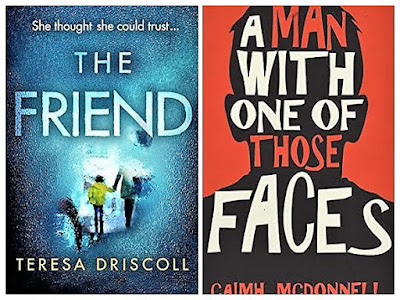 So that's it for January, not a bad month at all, what about you?  How have you filled your first month of the year?

All the UFO's, well stitching ones anyway

There have been a lot of posts on Instagram this last week about tidying up your crafty space.  I don't have a craft room as such but I have been able to re-claim our smallest bedroom for storing all things crafty since Oliver is not sleeping over now that Jenny isn't working late's.
It was slowly turning into a dumping ground though, as rooms that are not occupied have a habit of becoming, so this week I've made myself go in there for at least half an hour each day to sort out drawers and boxes.
I found out all my cross stitch projects, UFO's and finishes not "fully finished" and also two projects that I really don't think I want to finish the stitching on.

The stitching is all finished on this one but it was too large for an ornament and I didn't know what else to do with it. (any suggestions would be welcome). 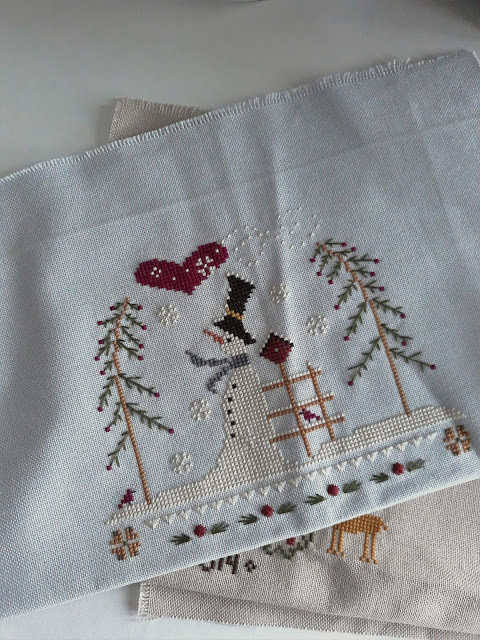 This is a Lizzie Kate stocking and I didn't know how to go about finishing it!
(you can see how old this one is!!) 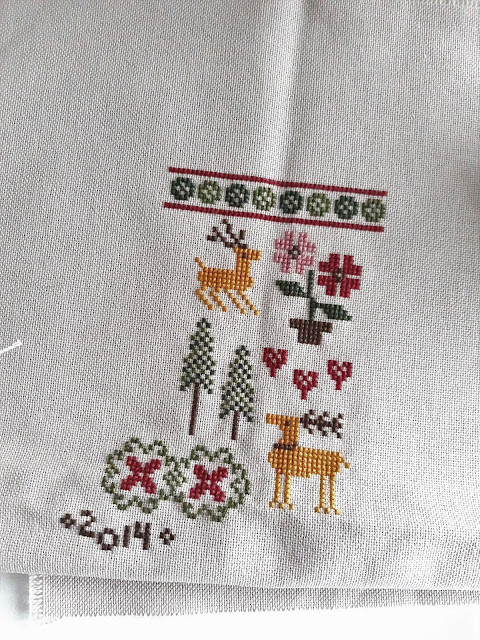 Pear Tree is a very old finish, older than the one above but I remember that I cut the fabric too close to the stitching and I was so annoyed with myself that I just shoved it in the cupboard.  Every now and then I get It out and still don't know what to do with it. 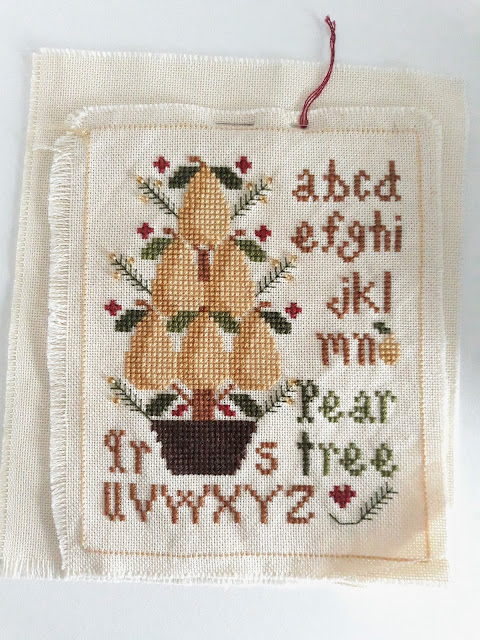 This Carriage House Samplings piece has been in the cupboard for a couple of years too, I just need to take it to be framed!
I remember I was putting off taking it at the time of finishing the stitching because I knew it was going to cost probably £50 plus to get it framed.
It's more than likely going to cost me more than £50 now, but I really should take it in.
I have two more of these 'Girls' to stitch and I know they are not everyone's cup of tea, but I do love their quirkiness. 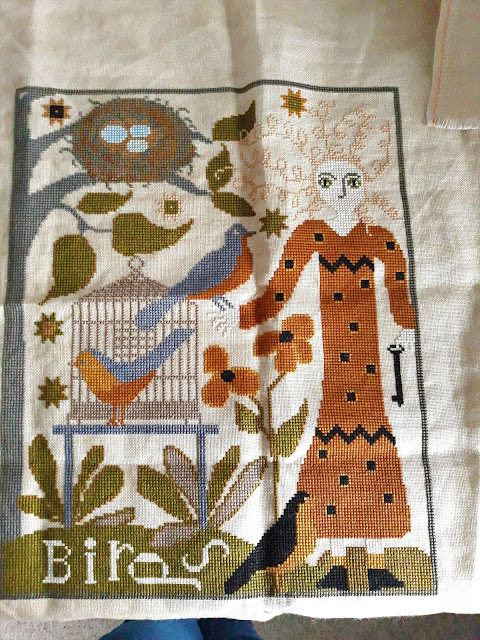 Prairie Schooler Santa's waiting for minimal stitching to get them done.
All the backing card and fabric is all cut out ready to finish these. 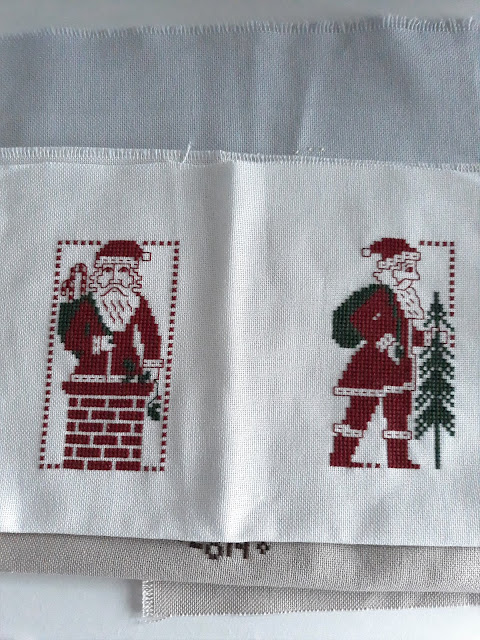 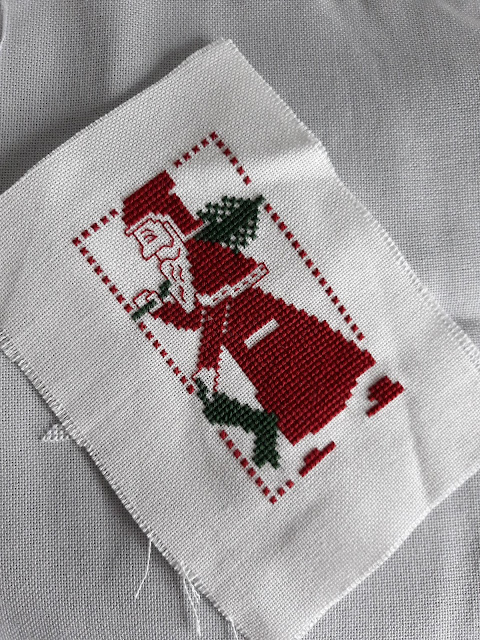 I started the one below in 2017, LHN 'Snow White' I just lost motivation with this one, but I do still like it so it will get done sometime. 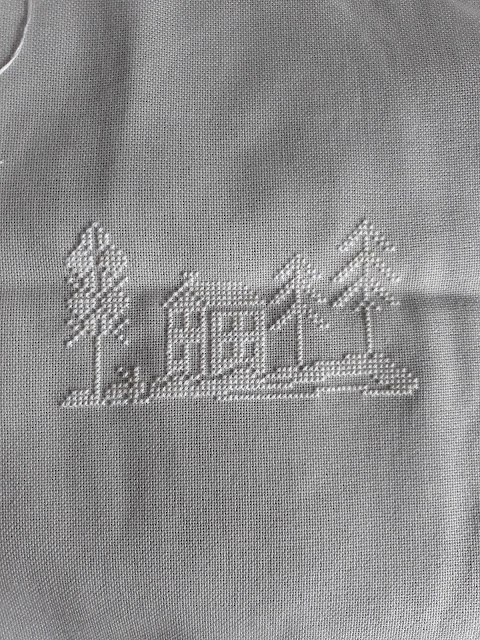 Remember this one?
I have no idea why this one didn't get finished for Christmas, it was so close.  I even had the frame all ready for it too.  Perhaps I can get this one done in February. 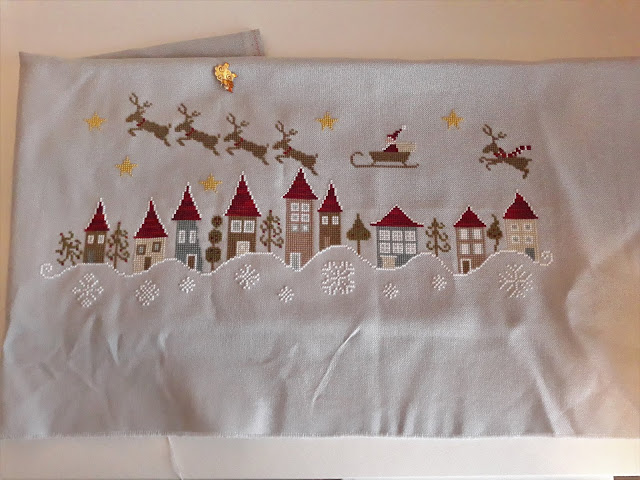 These next two are really old, old projects, so old I can't remember what this one is called, lol. I forgot to look when I pulled it out yesterday, I do know that it's supposed to be a pillow and it's still on the scroll frame.
I still quite like it so perhaps someday I will finish it 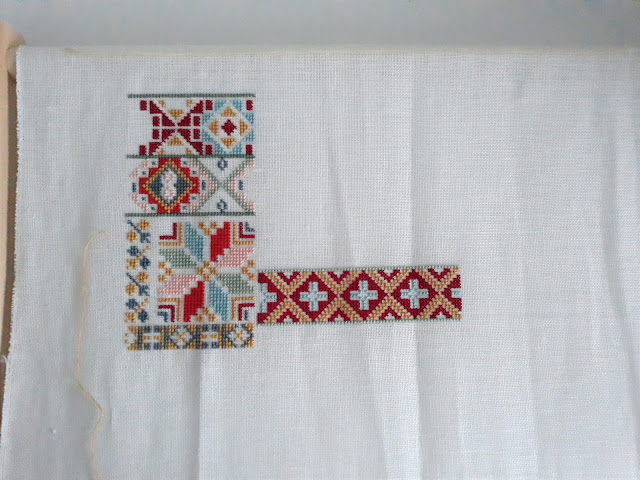 This one was started as a SAL with a fellow blogger, Judy, who lives in Canada.  Judy no longer blogs but we do speak on Instagram, I'll have to ask her if she ever finished hers.

Sampler Game board by The Drawn Thread 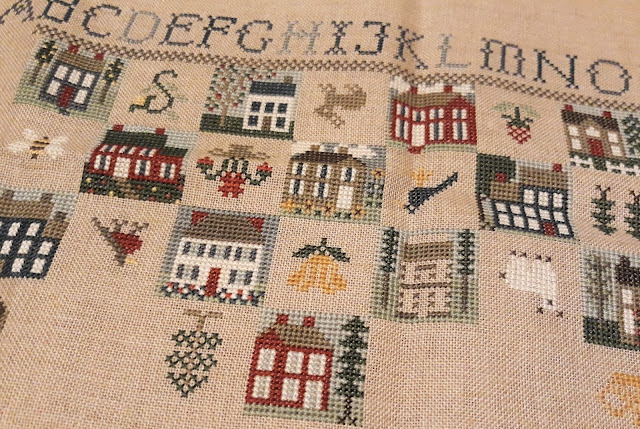 I do want to finish this but I'm not keen on the fabric, it's very 'floppy'
This is how it would look once finished 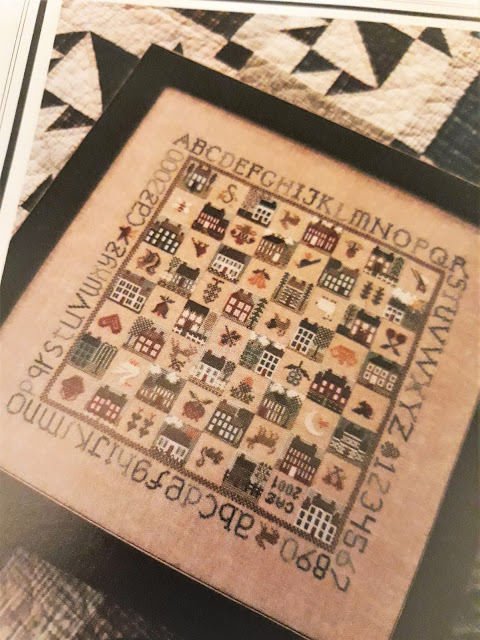 The next two projects are the ones that I no longer want to carry on with.
The first one is Elizabeth Jackson by Samplers Revisited 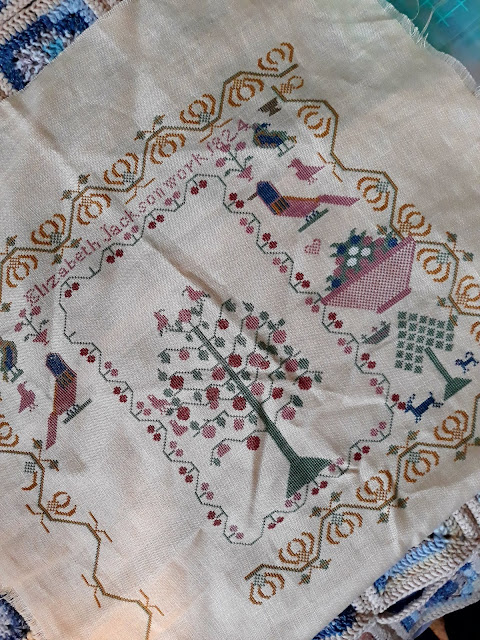 Homespum Elegance Summer Patches
This is stitched on the called for cushion, not much stitching left to do, but again, won't really go in my house now. 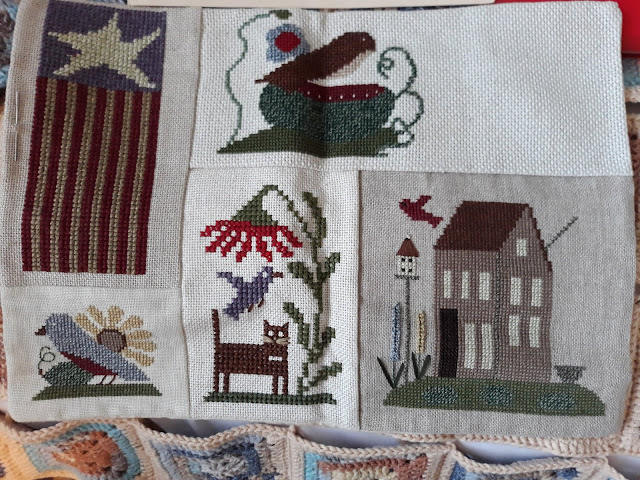 I am looking to sell the last two partly stitched pieces because it really would be a shame to leave them stored in bags.  I have listed them on ebay and on a FB group, but If you know anyone that would be interested in buying either of them then do let me know, my email is in the sidebar.

So that's my Stitching UFO parade It's not as many as I thought and certainly no where near as many as some people have on the go but I would still like it to be less.
I'm going to try harder this year to keep more focused, and now that I've sorted these out you never know I might decide to work on the ones I want to keep and fully finish the ones that are stitched.

At some point in January I want to a post about all the things I've carried over from 2018 but I need time to get them together, take photos ect so today is all about the new starts.

A small group of us on Facebook are doing an ornament SAL.  We started out with good intentions last year to stitch a Christmas ornament a month, well that didn't turn out too well, but undeterred we are setting out yet again to attempt to stitch twelve ornaments in 2019, some are alternating between Christmas and Halloween some will stitch just Christmas, we will be sharing our finishes on the last Sunday in the Month, although mine will more than likely not be fully finished as it's such a pain to get all the finishing paraphernalia out for just one thing. 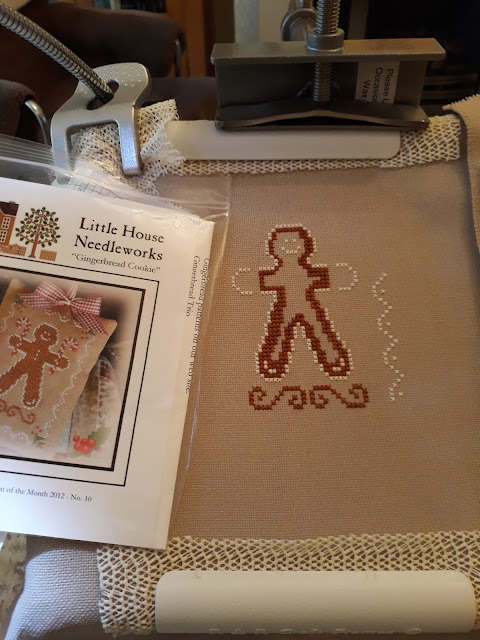 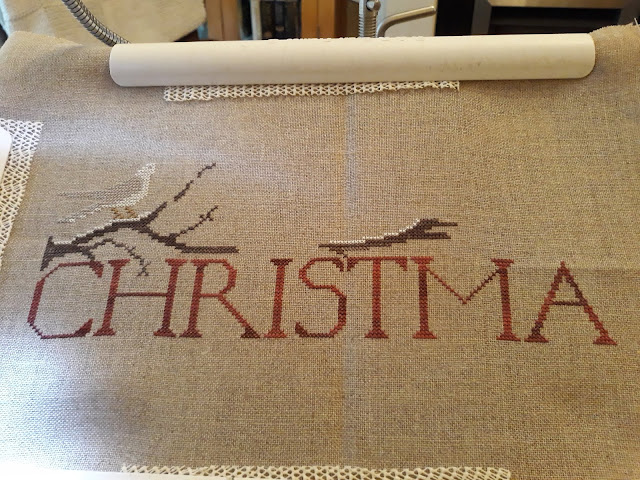 I'ts been a while since I've stitched anything using just one strand of thread but I do love the way it's looking.

This coming week I will be alternating between these two pieces with perhaps a little bit of scarf knitting when the light becomes to poor to stitch by.

I hope 2019 got off to a good start for you, it was back to work for us on Wednesday and it was nice to get back some routine to the days, I like routine, I function better with routine, plus I always start the new year with a new 'back to work wardrobe' so I get to start wearing all my new clothes, of which I got quite a lot this time, all in the sales I hasten to add.  I don't really go in for sales but I chose shops where I could buy good quality clothes at more or less half their original prices and that will last more than just this year, a lot of the time I bought on line, so no trekking around shopping centres winner all round!