Some knitting and a trip out!

I finished another In Threes cardigan for Bonnie this week.  These are great cardigans for layering and for that bit of extra warmth now it's turned cooler.
This one is knitted in Stylecraft aran yarn, it's really nice and soft and knit up lovely. 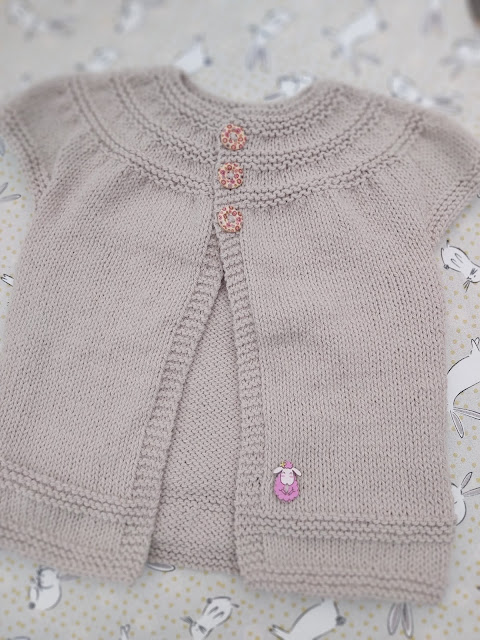 I knitted another Spindrift shawl by Helen Stewart back in September but forgot about it until I was rooting about in the wardrobe the other day.

I've no idea what yarn I used except that it was probably one of the first hand dyed yarns I ever bought, so it's a couple of years old at least. 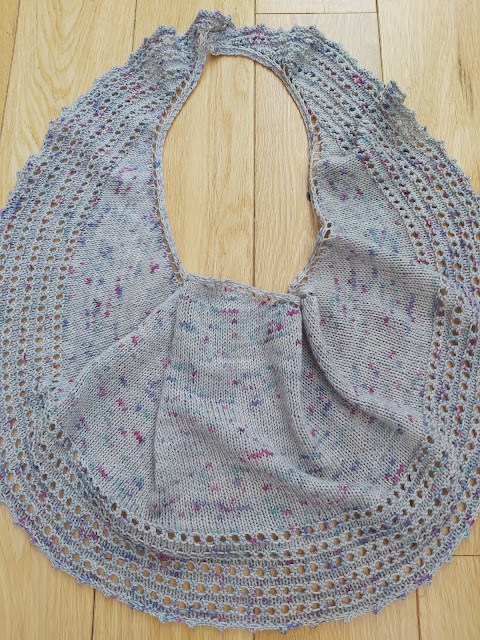 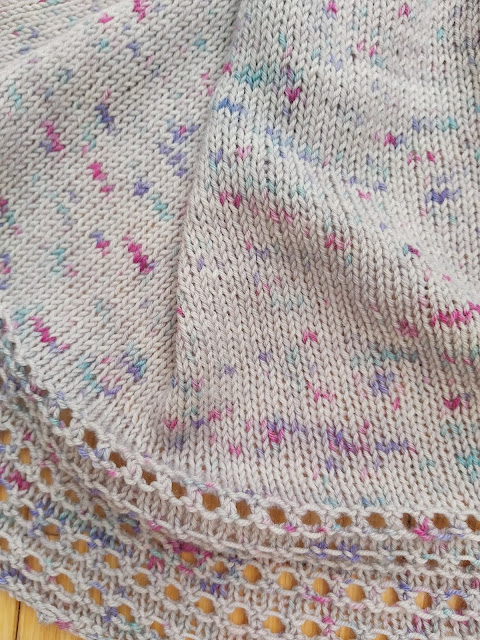 Mark has been at home for just over a week until another job starts.  All this shutting places because of Covid has affected his work.  They mainly do new and re-furbs on Hollywood bowls but because of the pandemic all the work that was planned has now been put on hold indefinitely.  Bowling ally's were some of the last entertainment places to open back up so they have made little to no money this year.
Anyway, while hubby has been off he has been busy fixing up the conservatory, (I'll tell you more another time), so on Tuesday I got out of his way and took myself off to Worcester for the afternoon.  Stevie went to Worcester Uni and we used to go there quite a lot when she was living there, but not so much recently.
It's a really nice city with some lovely old buildings and because I rarely go anywhere now my afternoon outing really lifted my spirits.
The Eagle Vault pub dates back to around 1740 and is a Grade II listed building, love the tiles. 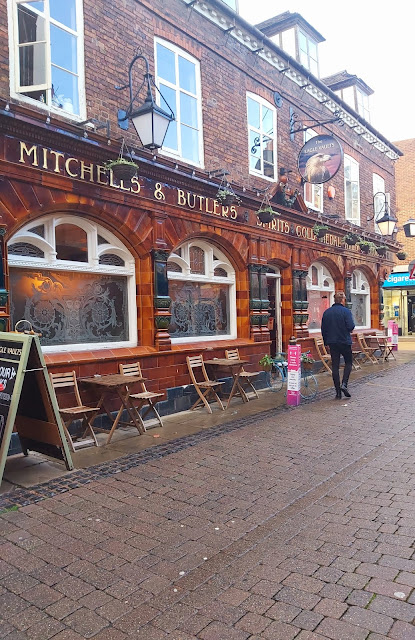 The Guildhall is another lovely old building, built in 1723 it is a Grade I listed building, being right in the middle of town you can't miss it 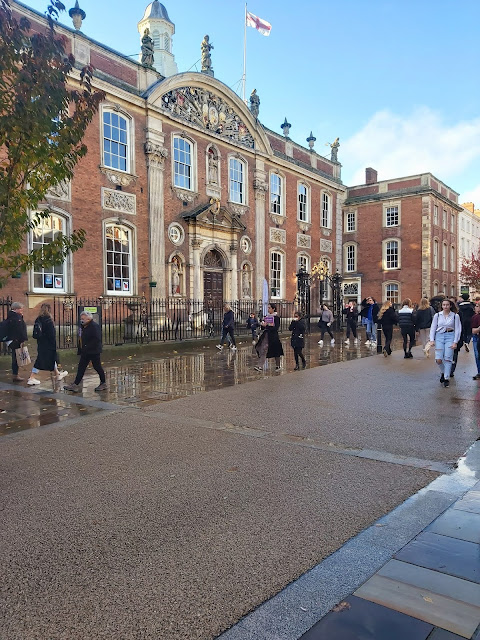 The Tudor House Museum dates back to the 16th century, this and the Eagle Vaults pub are on the same historic street, Friar Street 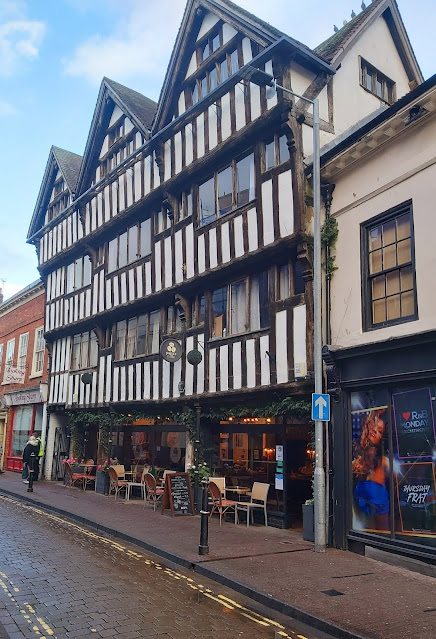 Another interesting thing about Worcester, Arthur Tudor, Prince of Wales and brother to Henry VIII is buried in Worcester Cathedral.  I have only been inside the Cathedral once (When Stevie graduated) and always forget to go an have a proper look round, perhaps next time I'll remember.
I actually went to Worcester not for the history but for some fabric for finishes.  There were at least three good quilt shops in the town at one time, alas I think Covid has put paid to that because they are no longer there :-(
So no finishing fabric but these are some of my spoils from the day.
Three Christmas bags and one stocking for Jacob, Bonnie Oliver and Arty have stockings that belonged to the girls when they were little which Santa now fills and leaves at Nanny and Grandads house ;-) 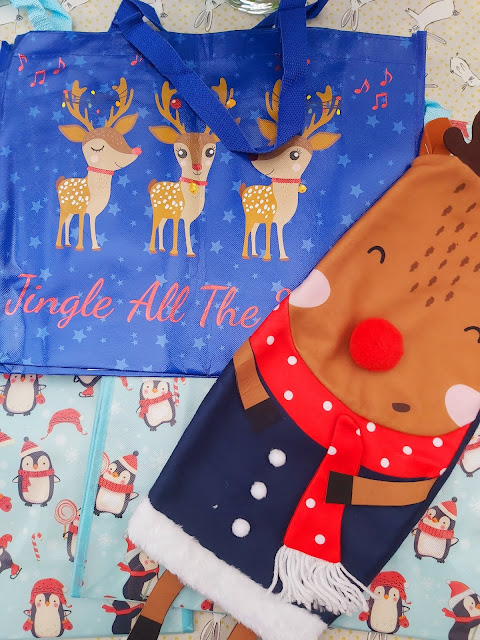 I usually buy the children a Christmas ornament from one of the various Christmas markets we go to, sadly there will be none of that this year.   Oliver and Arty chose one each a couple of weeks ago so I got one for Jacob and Bonnie this time.

The little reindeer is from Tiger, and is for me :-) 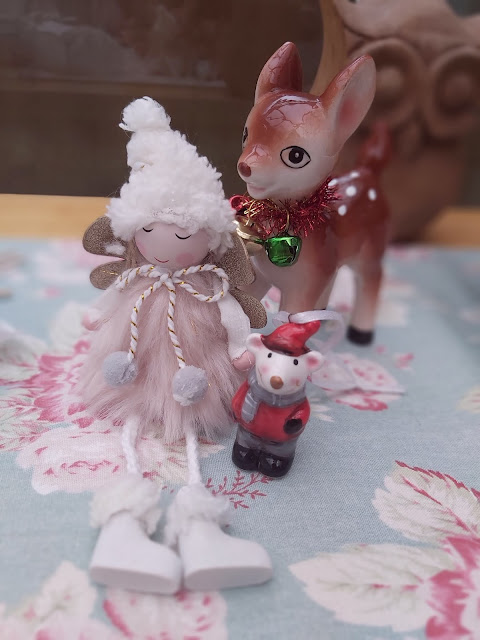 I also got a couple more presents for the little ones and a present for my sister's birthday in November, so a good day In all.

In other goings on, I was finally able to have the steroid injection in my knee yesterday, that should give me a good five to six months of pain relief and i'll be able to walk and get up from sitting without ceasing up :-)

My elbow has been much better this last week, I resorted to taking Ibuprofen again as the week before it was quite painful.  Obviously I can't take these long term so fingers crossed with the exercises it will start to get better.  I have another hospital appointment next week for a scan on my wrist.  I have a small lump there which the doctor thinks is a ganglion.  Honestly, I feel like i'm falling apart since I've not been working, lol.

I hope you are all staying safe and well with all the new restrictions and tiers coming into place.  Our borough was in tier 1 but according to the news tonight we will be moving into tier 2 by the end of the week.  Looks like we will be distancing, mask wearing and sanitizing for a long time to come.

All the Autumn things

Hello!, thank you for all the suggestions on how I could cheat in the Strictly Sock-along.  I've decided that I'm definitely joining in and I will be using some of those great suggestions left in the comments :-)
Today is another wet one.  I had the foresight to tidy the garden yesterday when the weather was lovely.  This time of year we have to keep on top of collecting all the leaves and acorns so any dry day we have we have to take advantage of, although, as I'm sitting here now looking out on the garden the top lawn is already covered with leaves again!
I did get my October Calendar Girl stitched and finished, only just though, this one caused me problems, I don't know why but I just kept miscounting.  But she's all done now and she's one of my favourites :-) 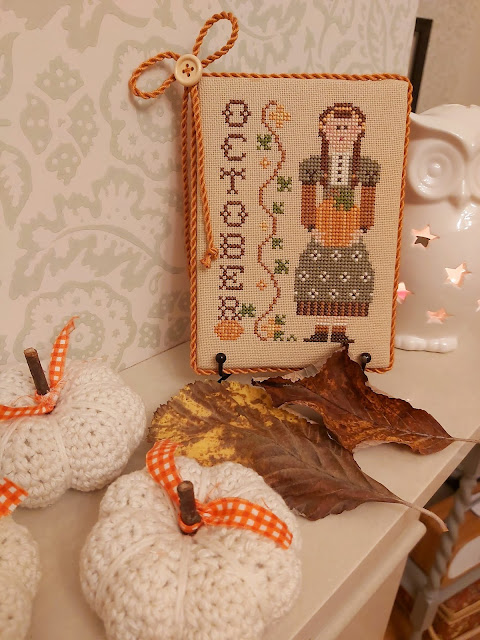 The Autumn leaves are a gift from Bonnie 🍂🍁
I've been a little obsessed with making crochet pumpkins, I made these three last week.
The little stick stalks are another gift from Bonnie, when she walks here she likes to pick things up on the way, a pretty leaf, a nice stick, as children do :-)
But actually the stick proved perfect to make the stalks and she was really happy that she had bought something useful 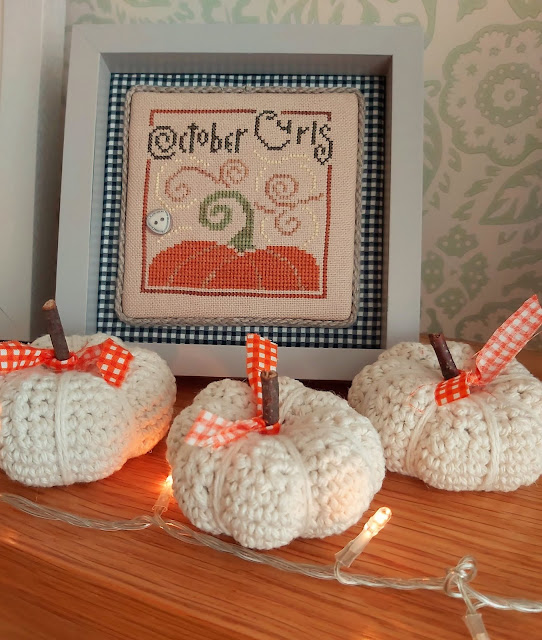 Todays gift was that lovely golden leaf in the middle.
Yes I do keep what the children bring me.  Oliver once had a small collection of sticks and pebbles in a corner of our garden, he would pick things when we were out for a walk and say, this is a nice stick / pebble Nanny and home it would come, lol 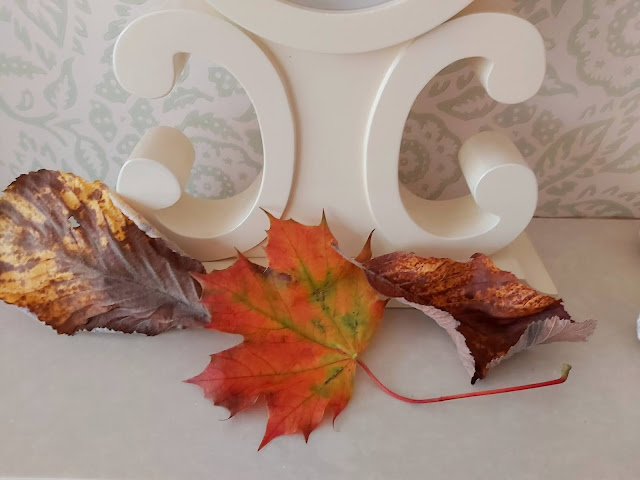 More pumpkins, these are paper mache ones from Hobby Craft, which I painted 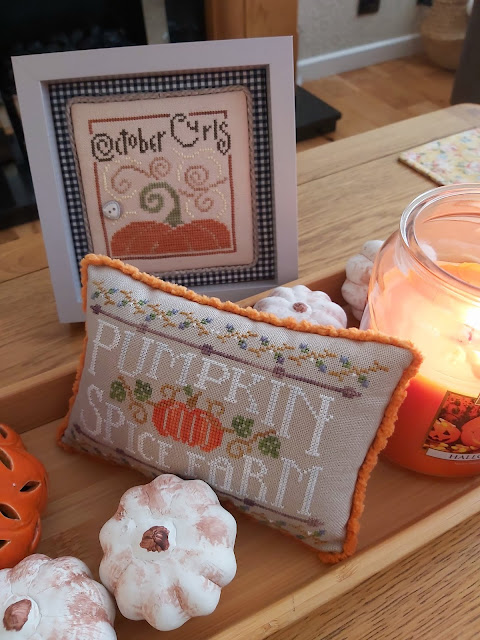 I bought a pumpkin crochet kit from The Cotton Pod at Yarndale two years ago and it kicked my obsession off with them this year.  There was enough yarn in the kit to make two pumpkins this size (they are just a bit bigger than the palm of my hand).  I made a stalk for the other one, (not photographed) but didn't bother with the leaf and tendril thingy as I found them fiddly. 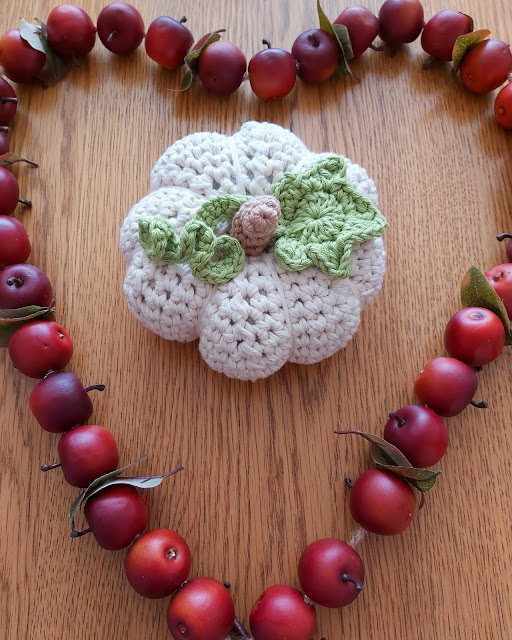 I'm going to make the most of a rainy afternoon now by starting to wind my yarn advent exchanges.
I'm doing two swaps this year and can't wait to put all the lovely things together.
🤶🤶🤶
See you soon
-X-
See you soon...... Maggie 13 comments:

All the pretty things

Hello!
It's been a few weeks hasn't it.  I just haven't been in the right frame of mind for blogging, it's been a struggle to get through the day most days to be honest.  I go through the motions of doing what needs doings but finding little joy in my day.  It's not the time of year, it's not even this new 'normal' that we are all having to get used to, it's just a dark cloud hanging over me, i'm grumpy, irritable and generally not very good company.
BUT, today I woke at the crack of dawn and despite the grey, rainy weather felt, if not full of the joys of Spring, much better than I have done in quite a while.  I've got all my jobs done, baked some millies cookies, (recipe in the pages at the top of my blog, they are delicious!), gone for a walk and finished listening to my latest audio book, (The End of The Affair by Graham Green).  This version was narrated by Colin Firth who did an outstanding job.
So, with time to spare before I go and pick Oliver up from school I thought I would come and say hello and show you some of my latest purchases.
I haven't bought yarn in quite a while, in fact, I think these may be the only ones I've purchased this year.  When I saw these posted on IG I couldn't resist though and decided to treat myself. 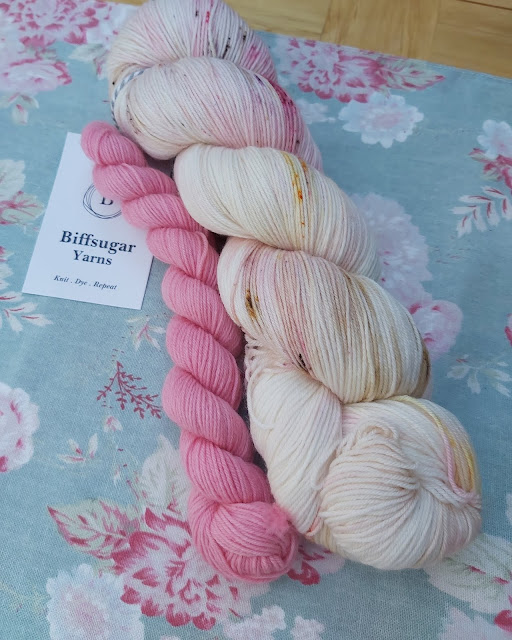 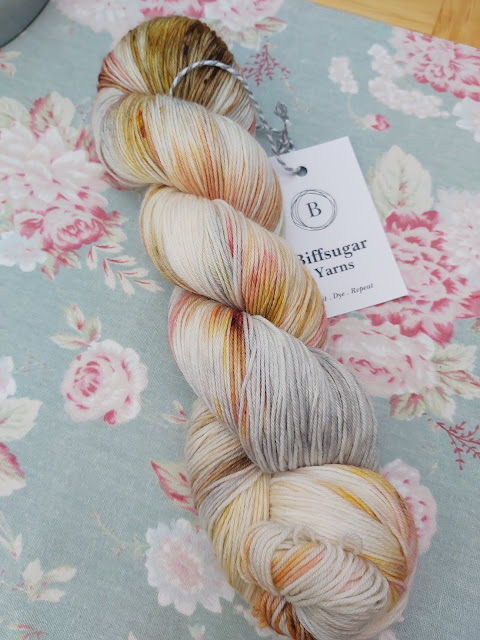 I'm in love with all of them and I have the idea that I want to try again to knit socks.

I haven't been very successful with socks in the past but as the Strictly sock-a-long will be starting very soon I thought I would have another go.  However, I don't watch Strictly and have no desire to, so how am I going to cheat?

For those who have no idea what I'm waffling on about, Ali, from the  Little Drops of Wonderful podcast host's this KAL every year, the idea is you knit on your socks whilst watching Strictly Come Dancing, those that don't watch, or cannot watch on the night it's broadcast come up with a cheat they can relate somehow back to Strictly thereby allowing them to knit on their strictly socks.

I haven't been able to come up with a cheat yet, if you have any ideas please let me know, If I can't think of a cheat I might keep them for Friday night knitting, but first I've got to decide which of those pretty yarns to use.

The pattern I'm going to be using is a vanilla cuff down pattern by Jooles, Sew Sweet Violet.  I just love how neat her socks look. 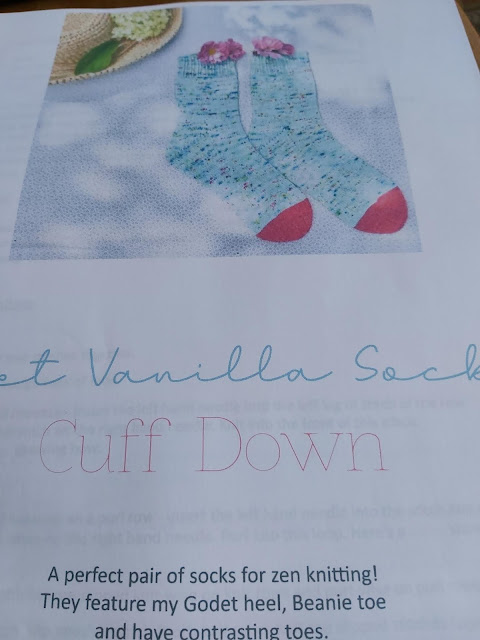 So watch this space! I could be a sock knitter before the end of the year, lol
Right, I'm off to have a cuppa in my new cup and maybe one or two of those cookies :-) 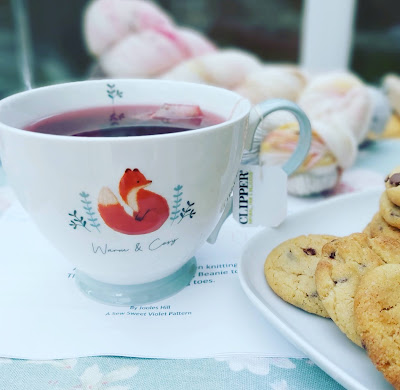