At last, after many months of waiting we are finally on the move :-)
We got notification late yesterday afternoon that contracts had been exchanged.

We are all packed up and ready to go, tomorrow morning at 8am the removal van will arrive and load up all our belongings.
It all feels a little un-real still after waiting so long, we sold our house right at the end of January and never thought it would take as long as this to move.

Still, it's happening, and after all the low points of last year.

This time last year was a particularly bad time, and there were times when I didn't think I would get through it, but I did, we did, and if anything it made us realise what we had, what we still wanted and what we didn't want to loose.

We have already made so many changes in the last 12 months, good things, this move is just the topping and we are both so excited to be making a new home together.

We may be able to complete the house sale/purchase on the 22nd.
so yayyy the end is in sight.  the first one in the chain is going in to sign his contract tomorrow and fingers, (and toes) crossed that the solicitors can do their thing and make it happen.

I'm sure you will all be glad when i stop banging on about house sales and post about something more interesting.  Unfortunately there is not a lot interesting going on except packing, phone calls and endless talk of moving!  I was awake at 3am this morning with house stuff going round in my head....not good.

Another thing you will be glad of is the last of my holiday photos, just indulge me this last time, they are cute kitties so I hope I am forgiven  :-)
Santorini Cats

We are still in the middle of the nightmare house sale, we had thought that we might be moving by next Friday but that seems very unlikely to be happening now.  The very last date that we can possible complete is July 24th.  That is the date that our buyer's mortgage offer expires, after which she will have to apply all over again for another mortgage.
Honestly, you couldn't make it up what has gone against us with this move, It would take forever to go through it all so I won't, I could have sat and cried on Friday when we hit yet another hurdle, we both really want this move to happen so we are keeping everything crossed, we are in the hands of the powers that be now to make it happen...watch this space!

In the meantime, as there has been very little craftiness going on I will share some more holiday photos with you, (and it might bring me out of the gloom going through them too).

The day before we flew home we hired a quad bike, (yes I know, my kids had a laugh about that too, mum, on a quad?? must be some middle age thing!!!)
See, they didn't know their leather clad biker mum in her youth, I can still be 'cool' you know, lol.  Anyway we had a great time, and it was a much better way of getting around in the heat, being stuck in a car when the temperature outside is touching 40 would have been no fun!

At the end of the long walk of shops and restaurants and the beach was a huge rock, which was (I suppose) left over from when the volcano erupted all those years ago. 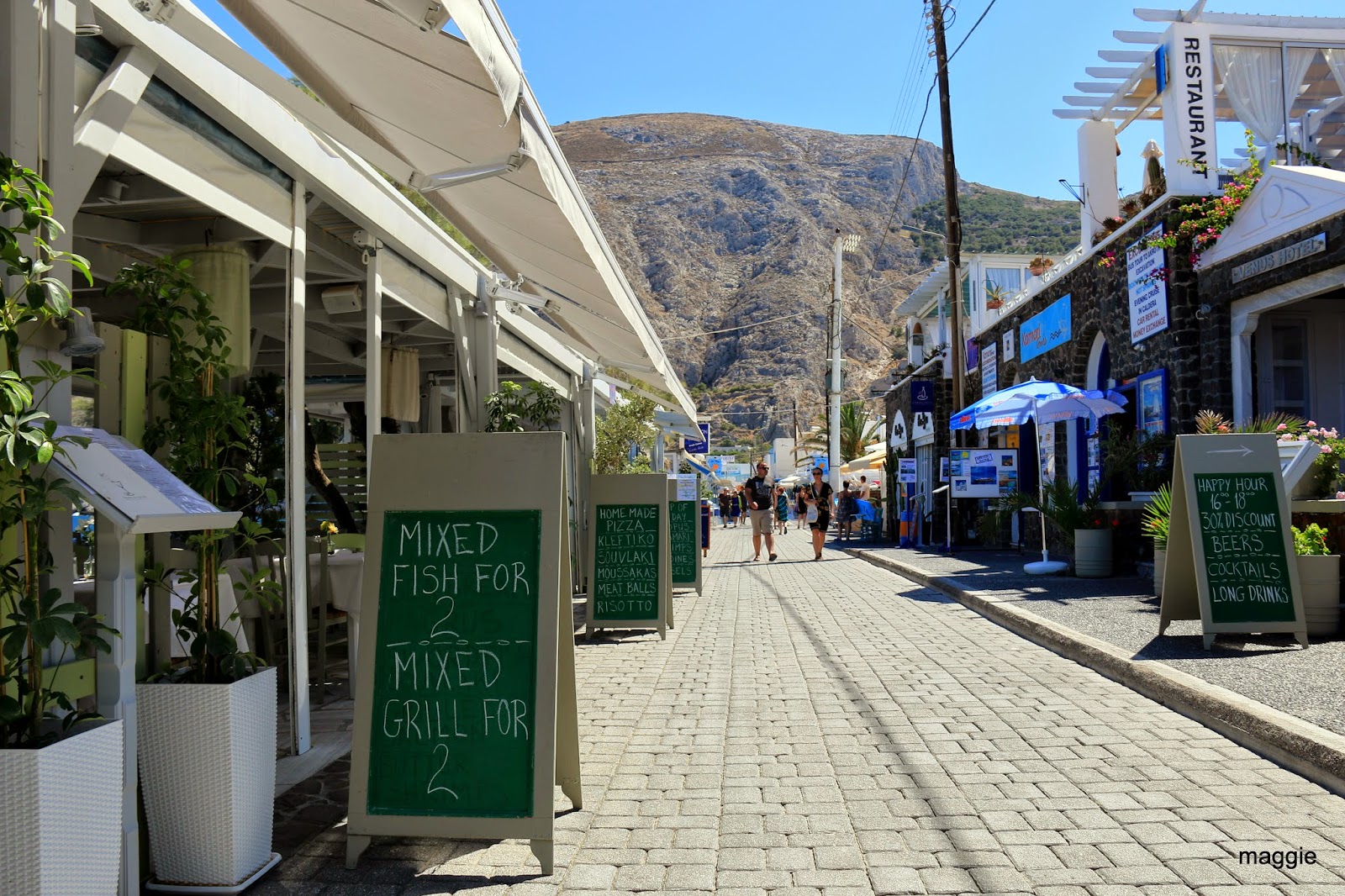 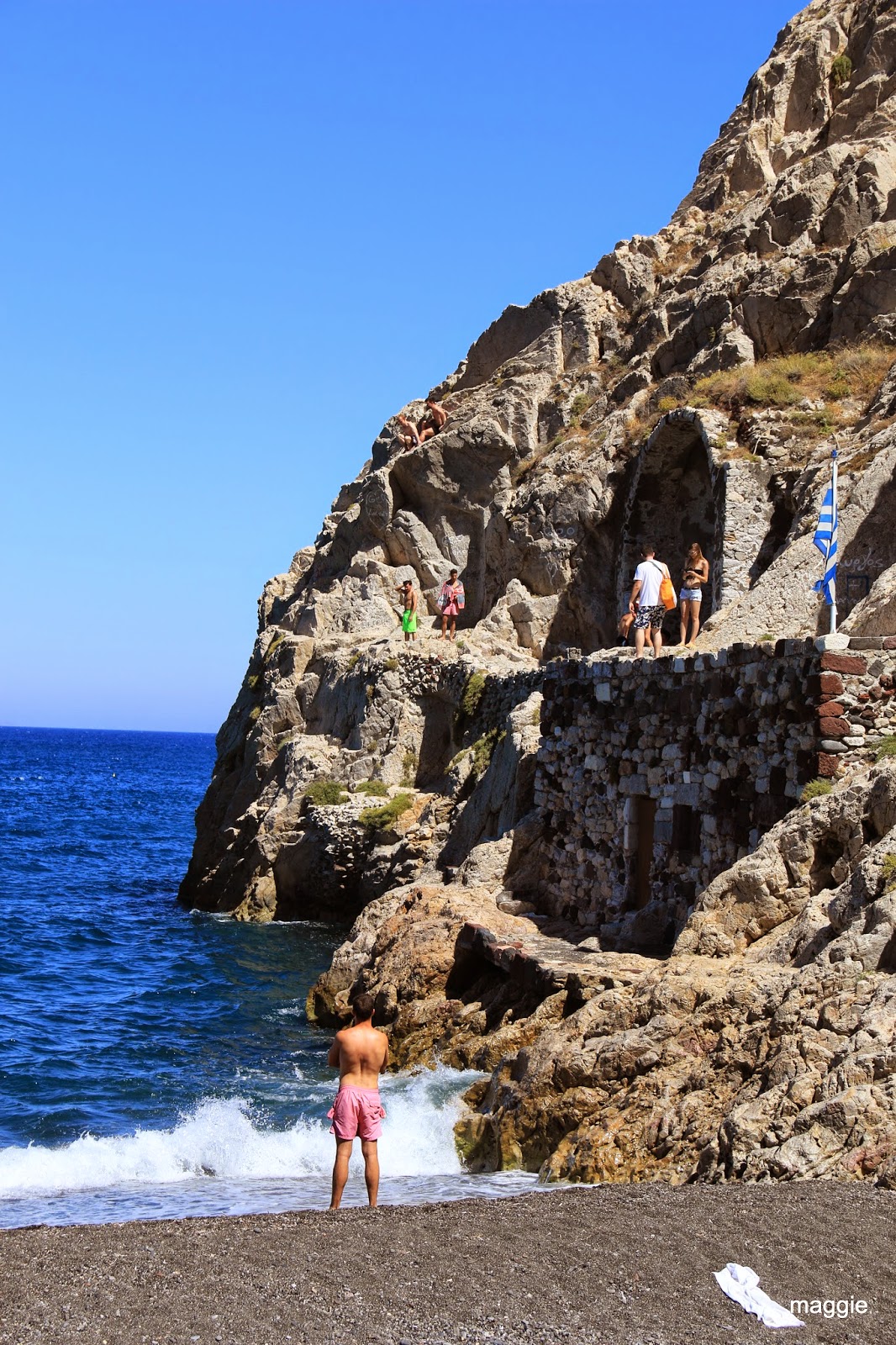 As this Island was a volcano the sand is not really sand, it's black and made up of shingles, not very good on the feet! 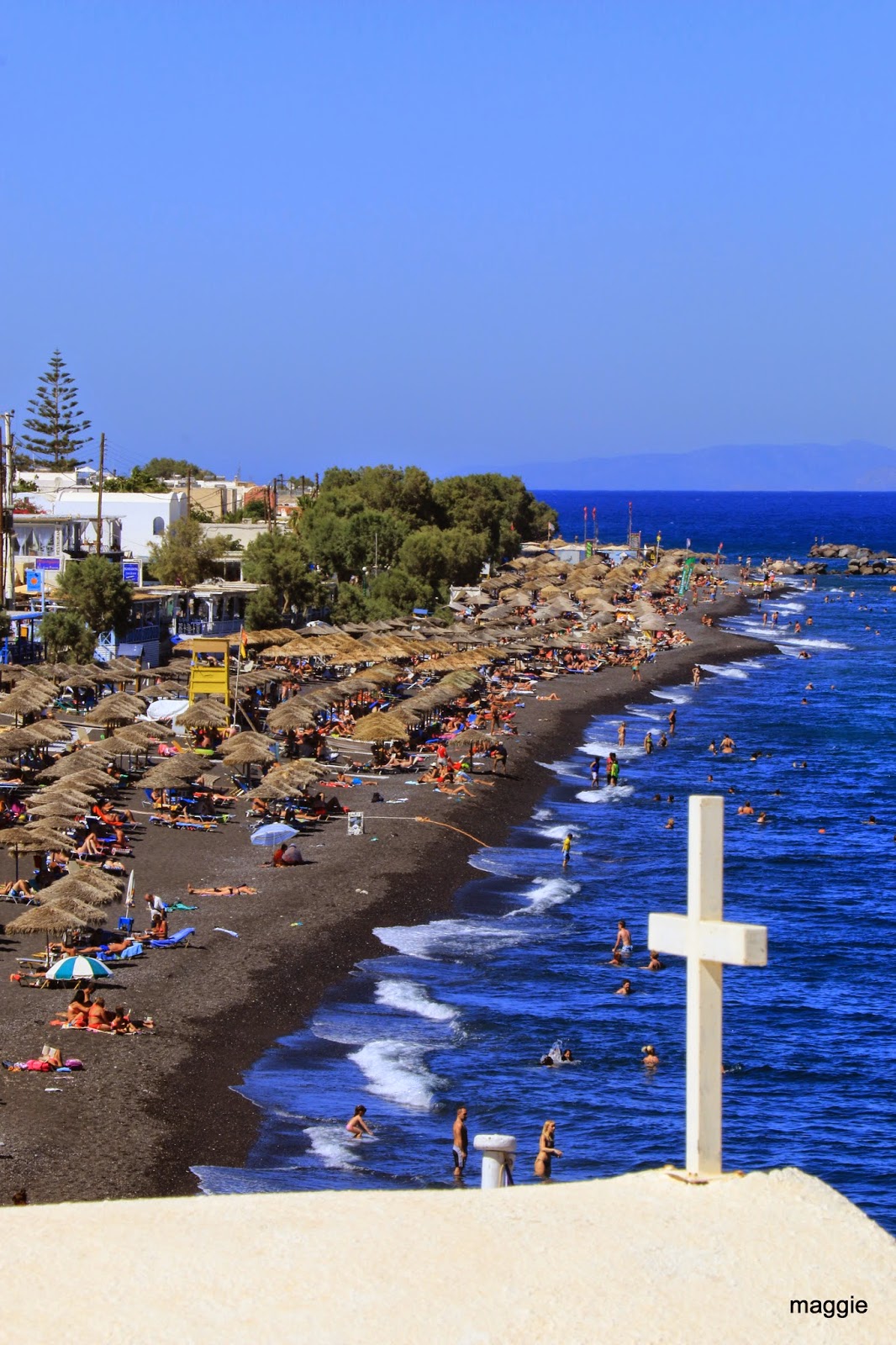 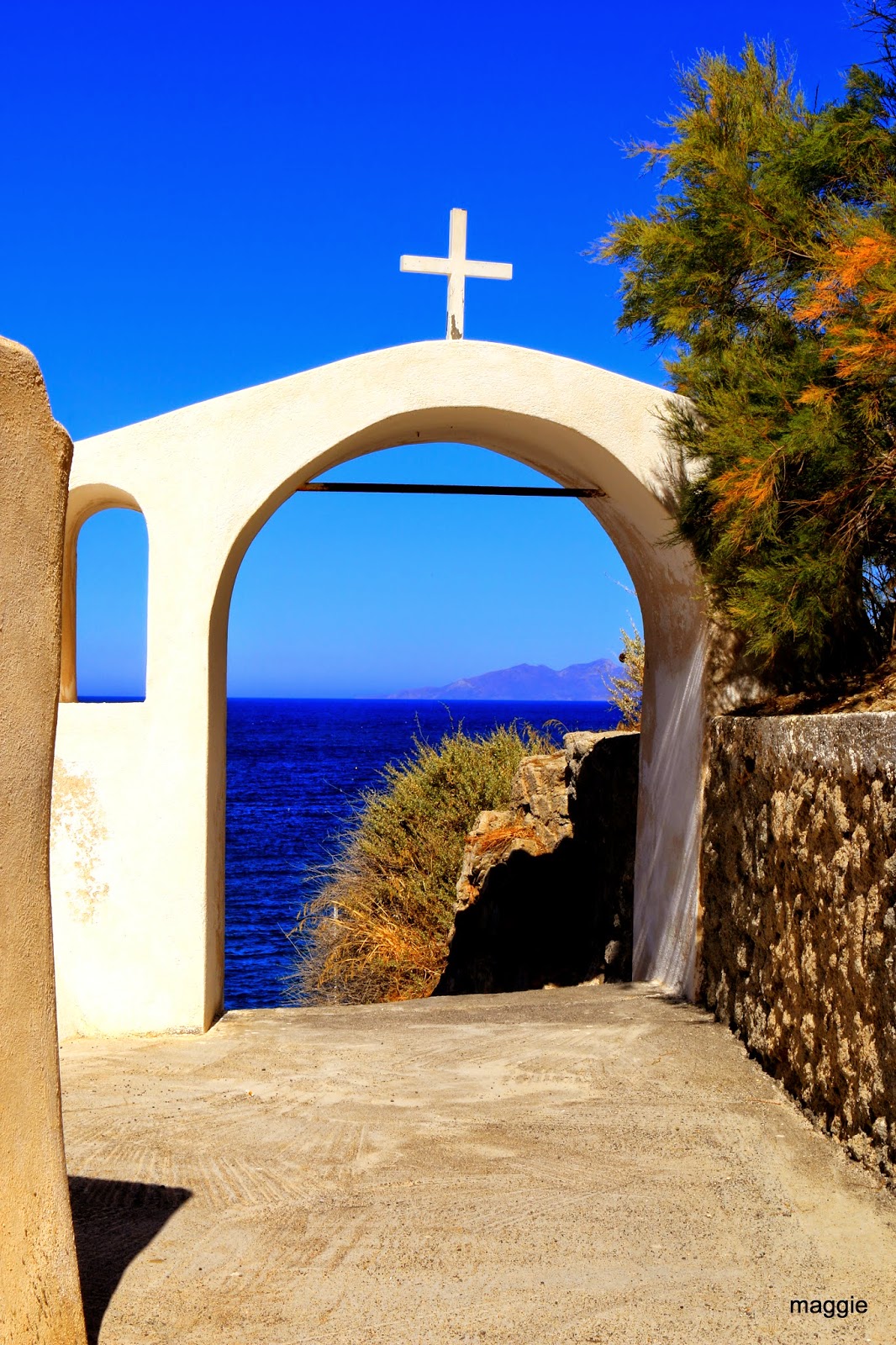 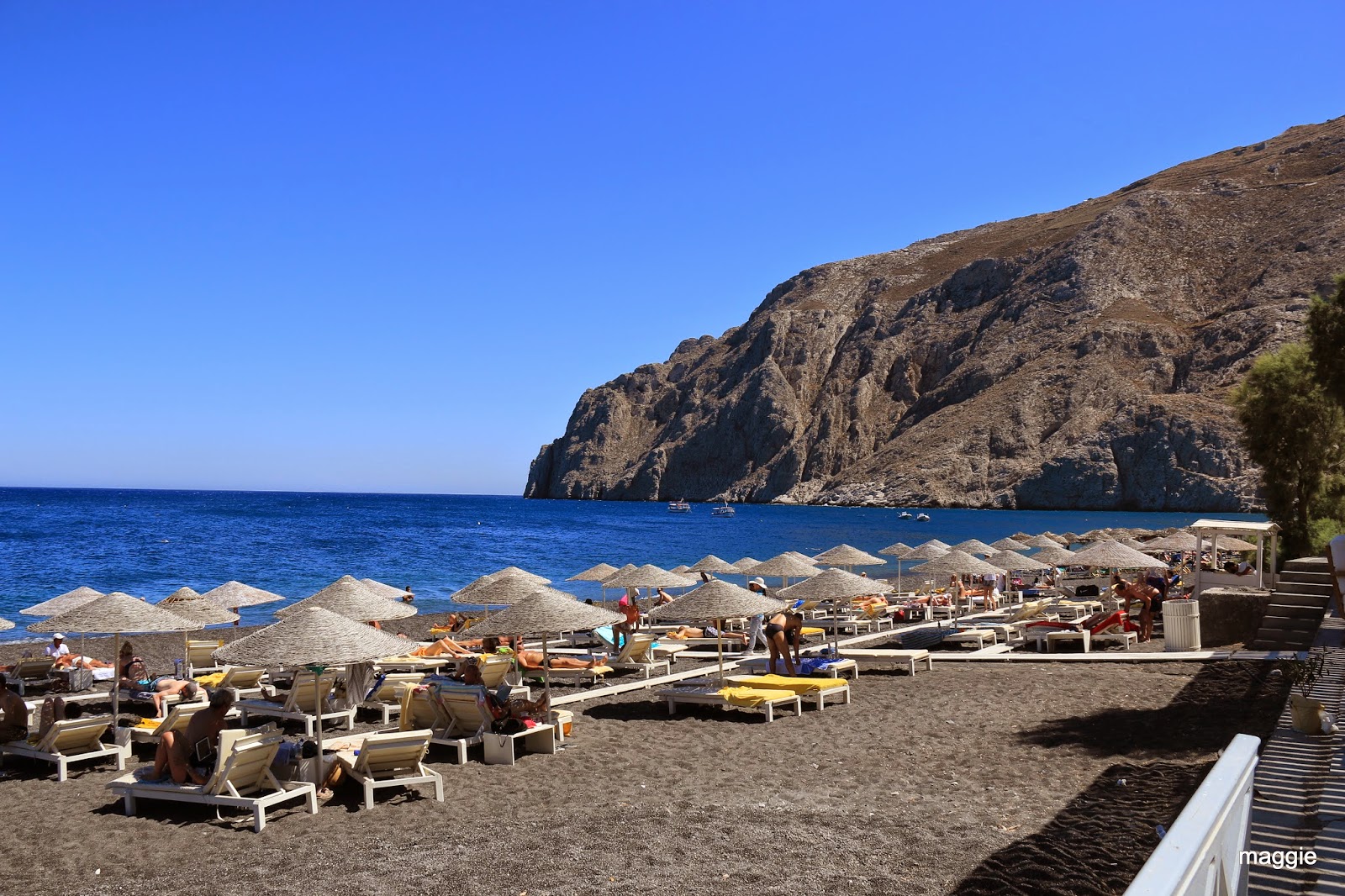 We spied a road running up the middle of that huge rock one day when we were out walking, we decided that if we hired transport we would give it a go as the view would be amazing.
It was probably a couple of miles to the top along a zig zag mixture of cobble and concrete road, we should have clocked how far but didn't think at the time.  There were a couple of brave (or insane?) people  walking up there, in that heat, it was probably torture!
But what a reward at the end!
Looking toward Kamari 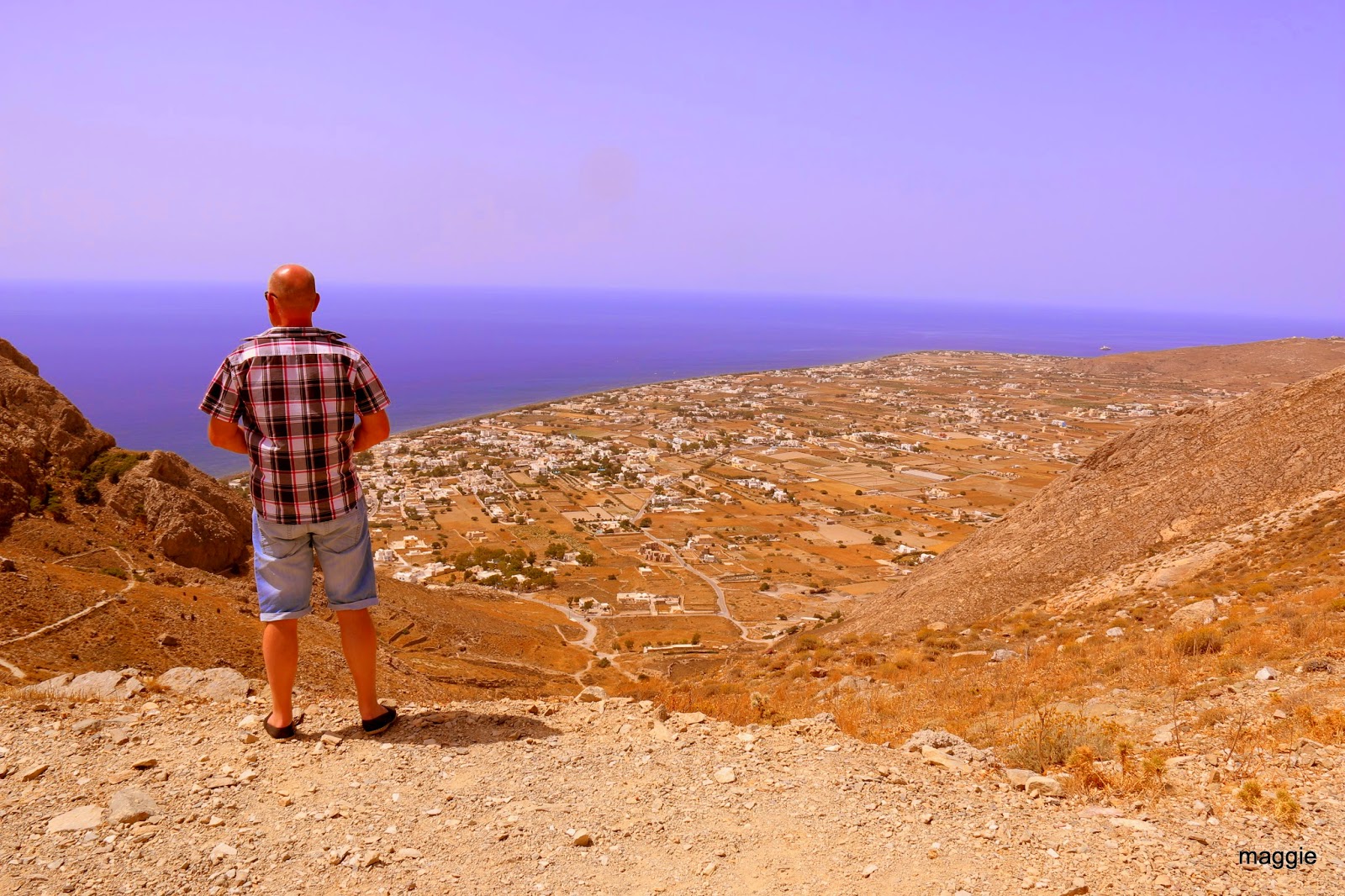 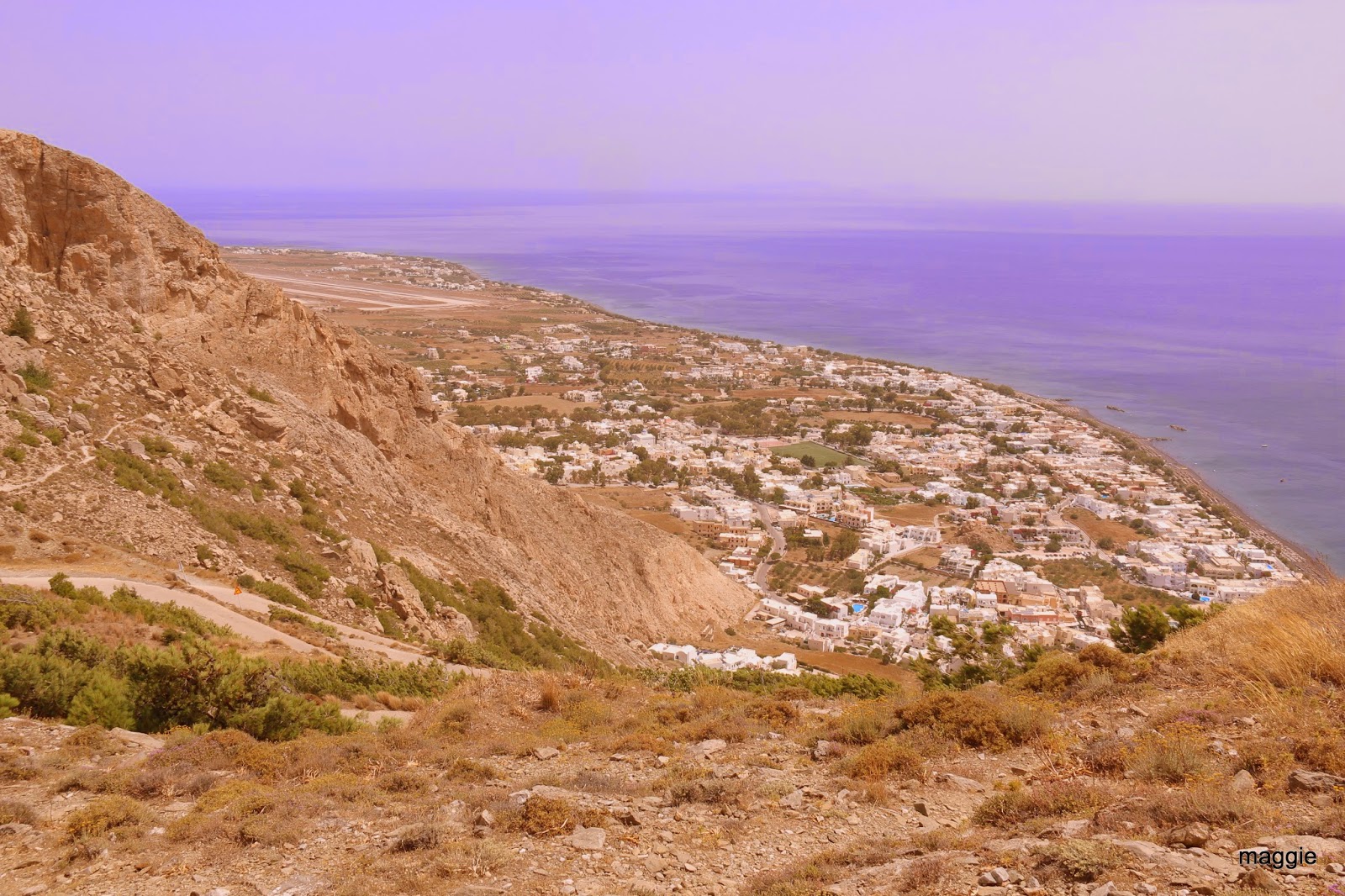 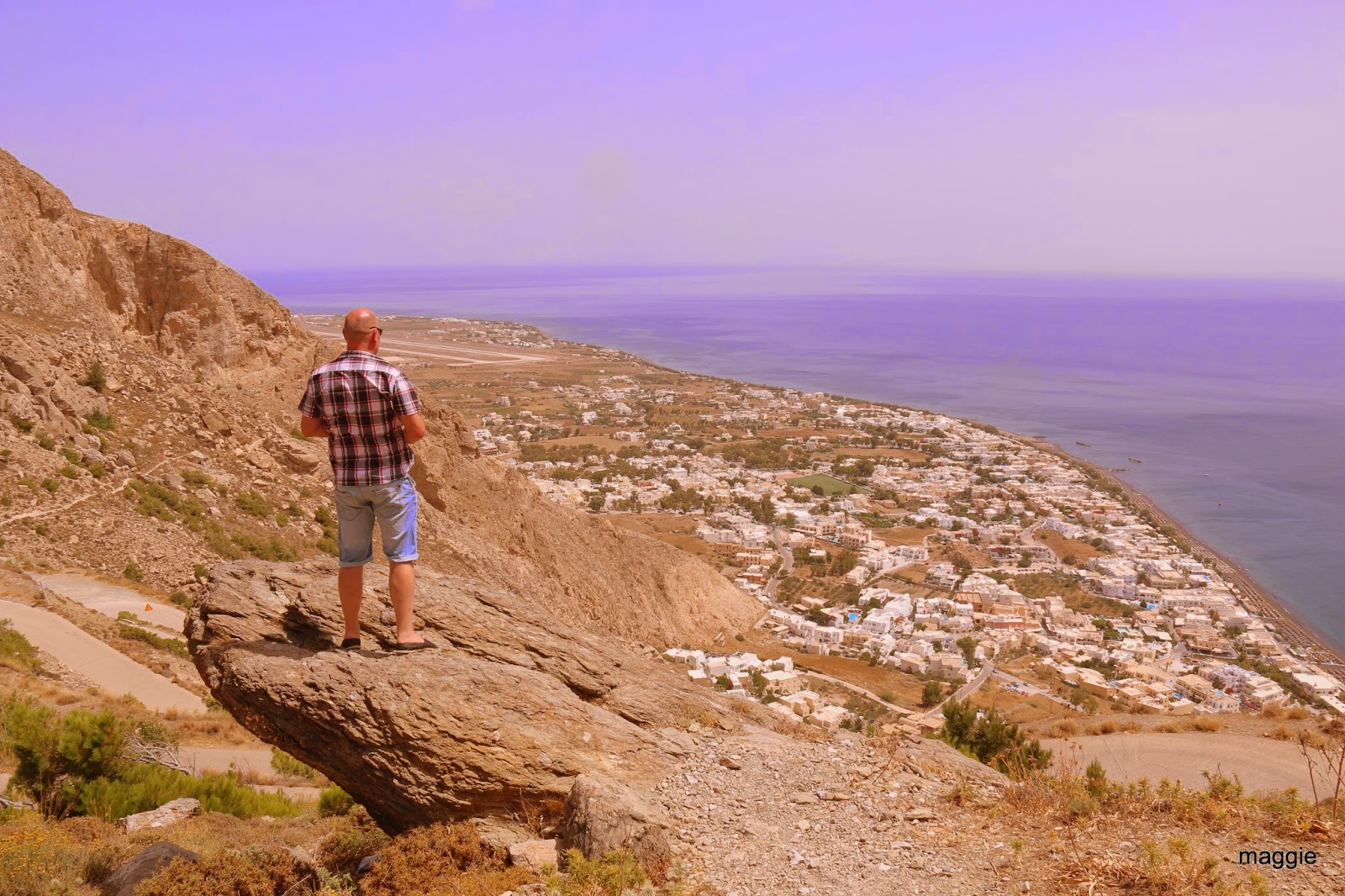 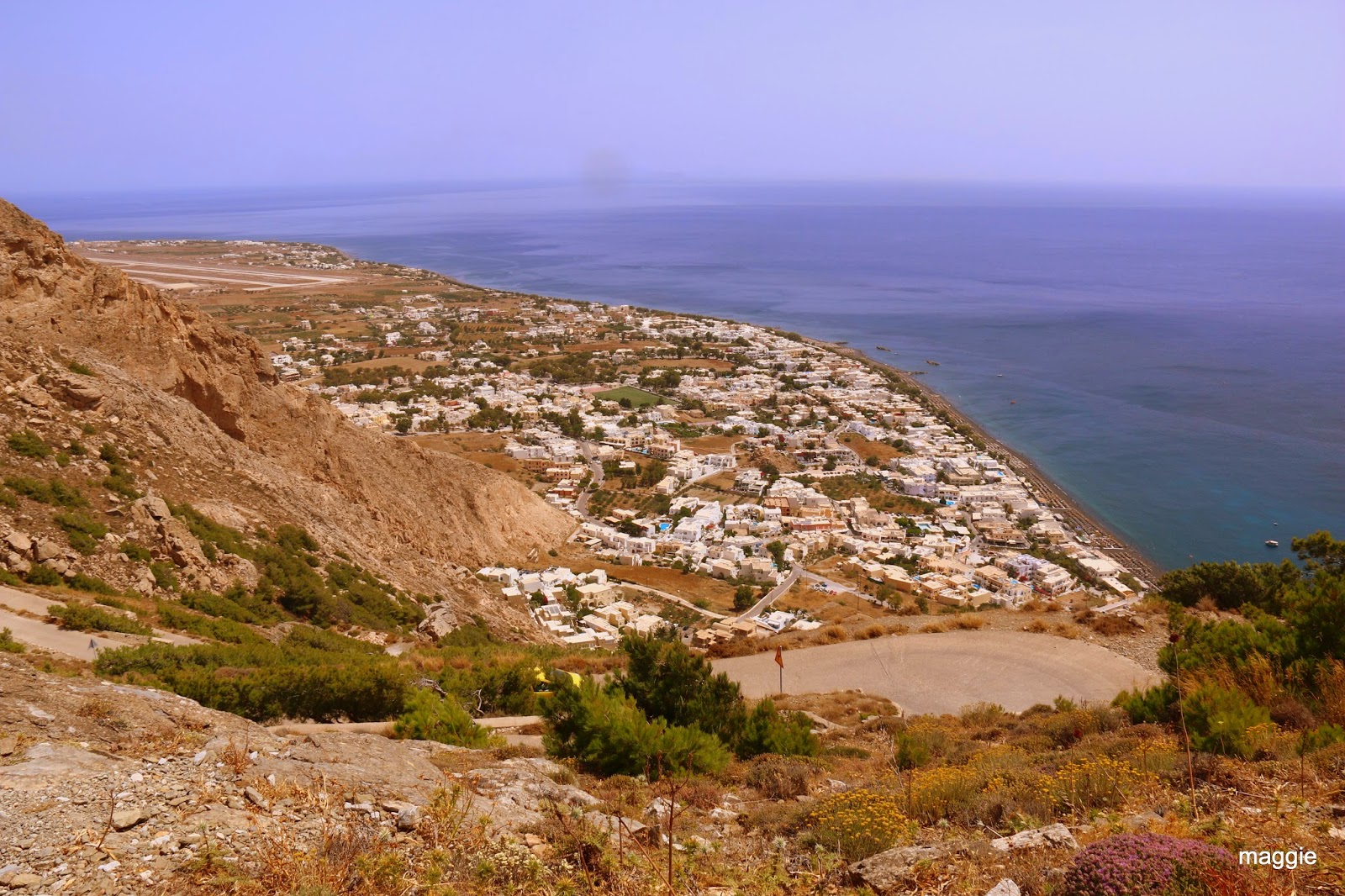 Later we headed over to the other side of the island.  We had seen a building and some masts high up on another hillside and decided to go in search.
This time the climb was much higher, and the masts and building turned out to be a military base. 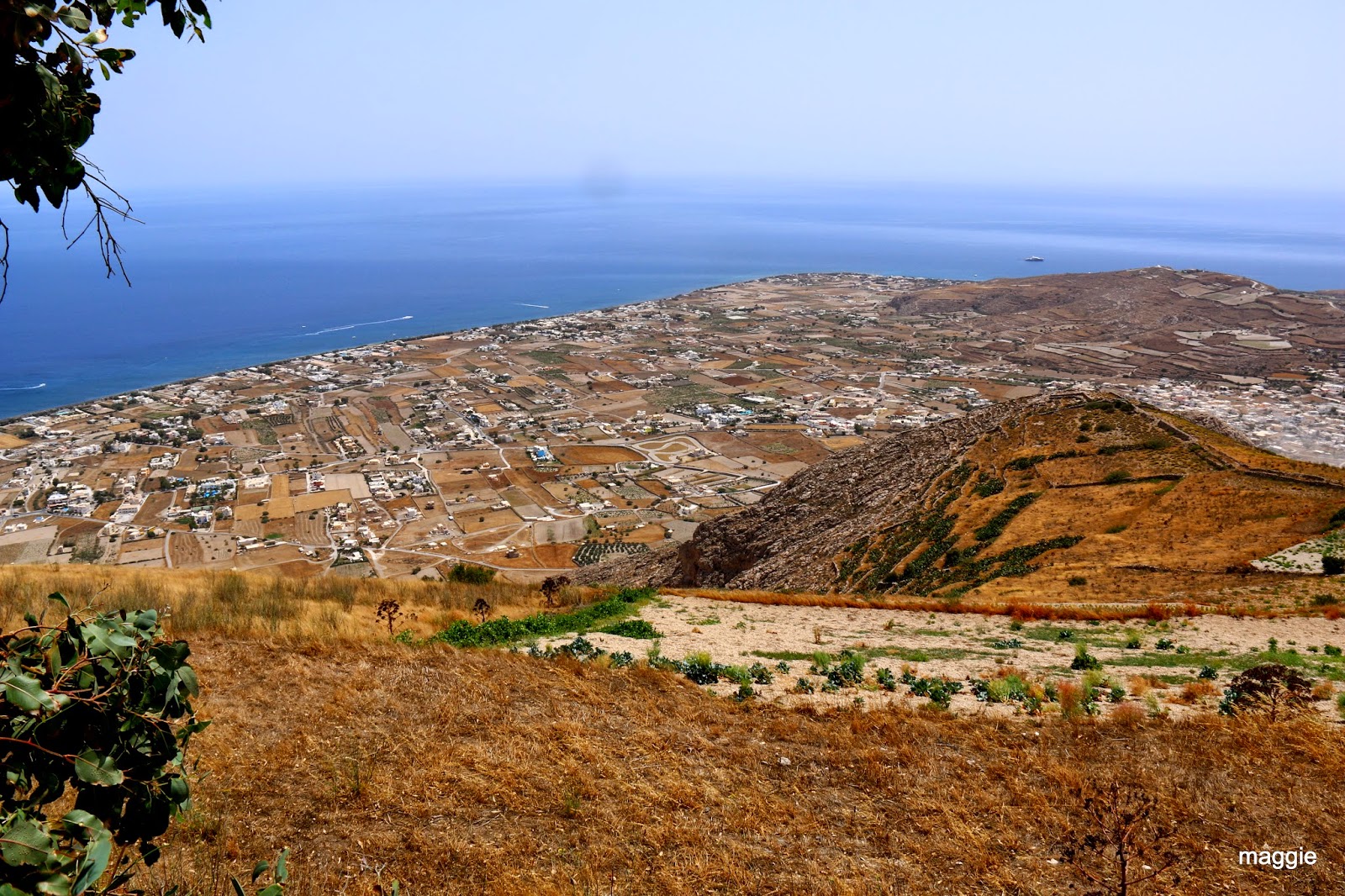 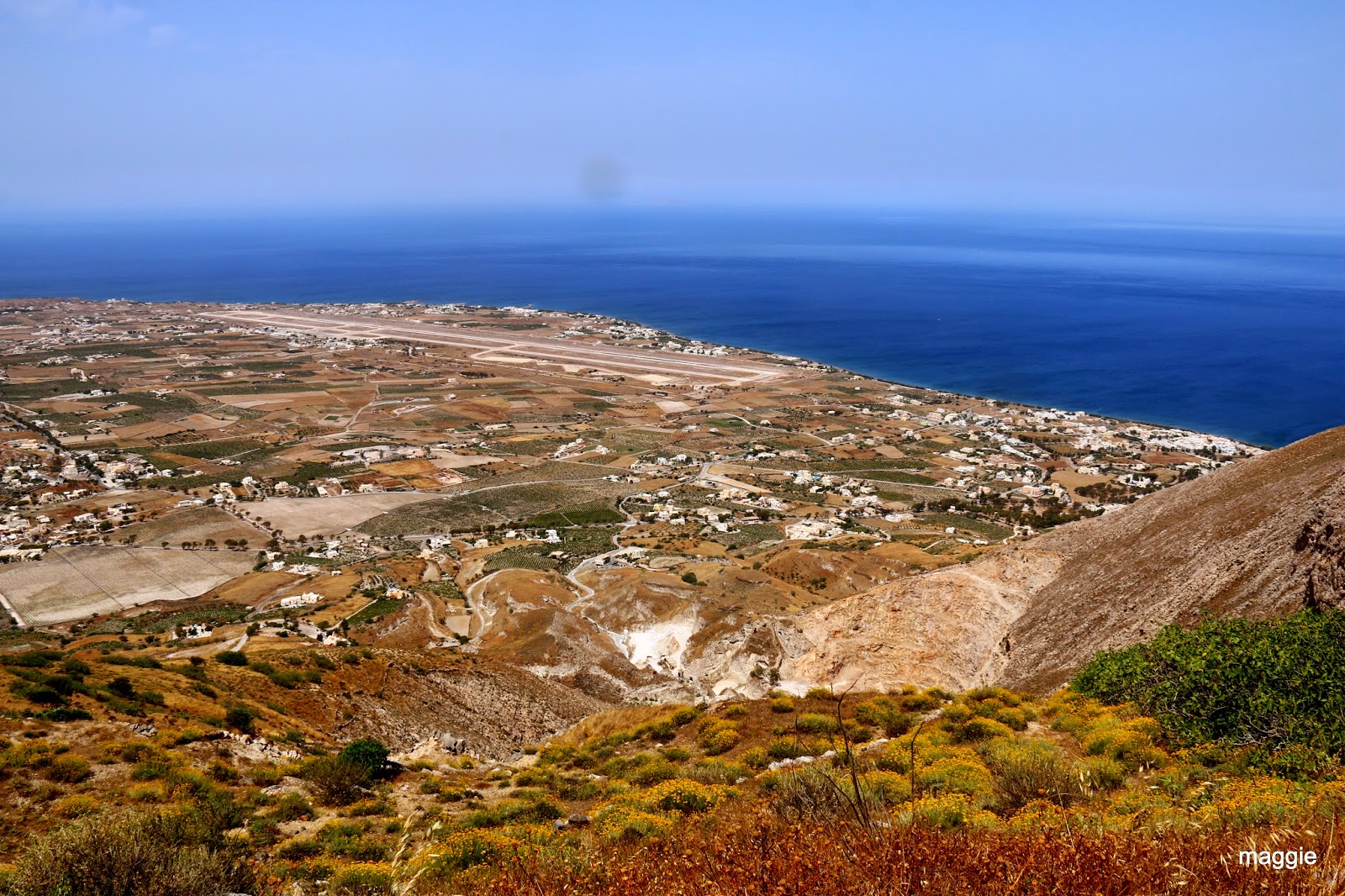 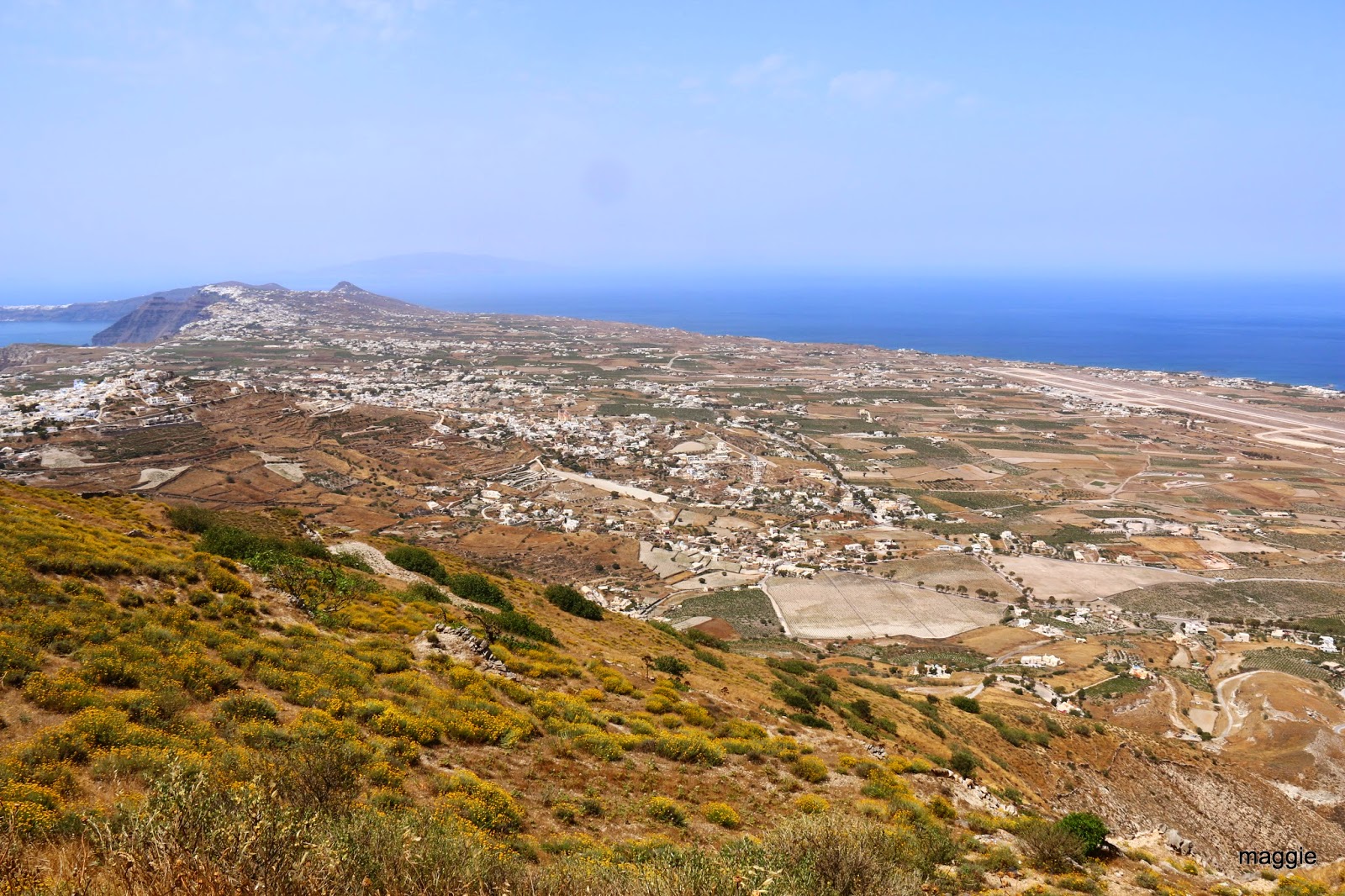 The view was amazing, like the view you get when your plane is coming in to land.

Our travels took us to one of the ports and another steep zig zag road.  There was not much of anything to see at the port itself but the view of the boats and cruise ships when we got back to the top was worth stopping to look at. 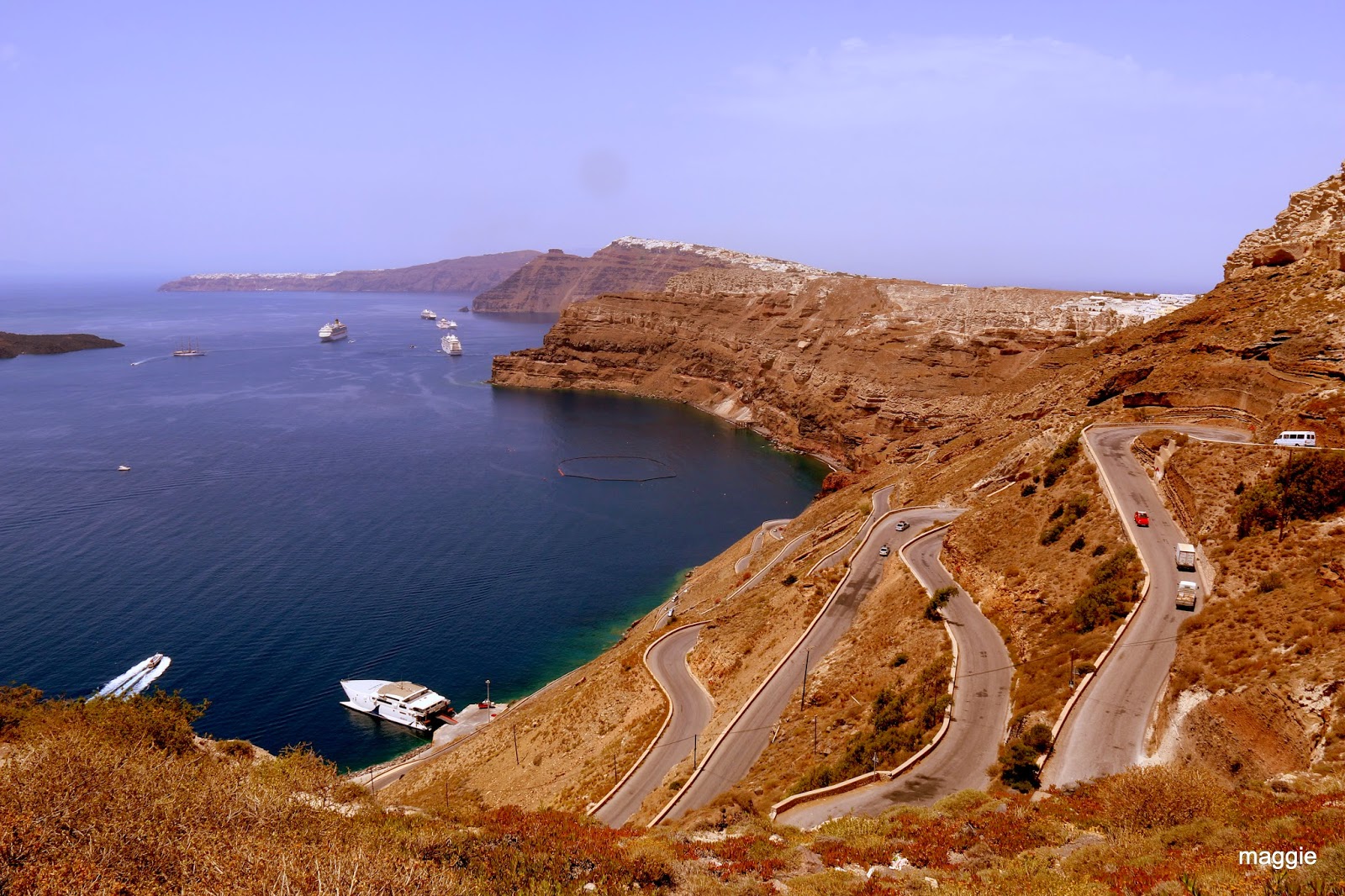 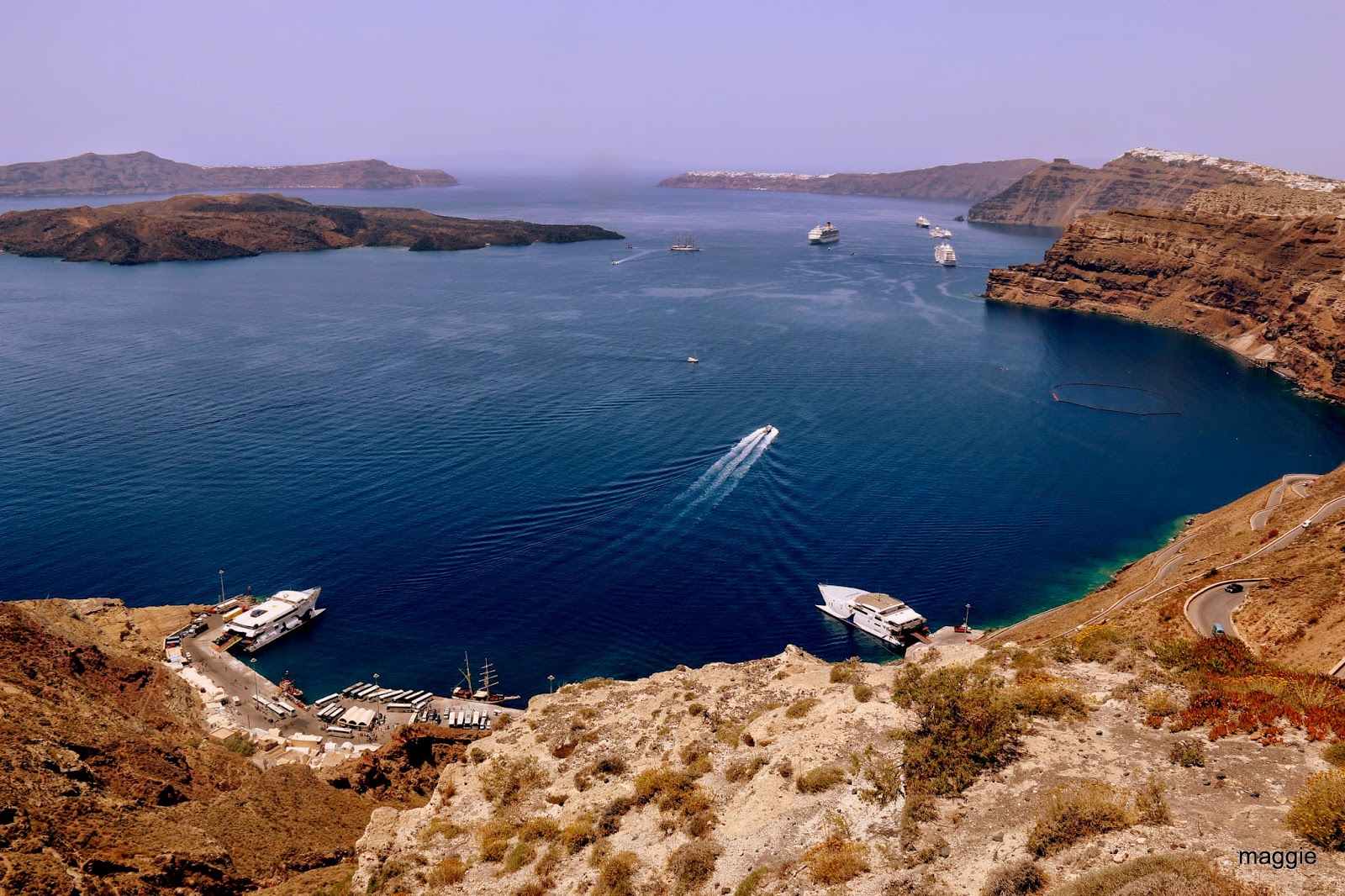 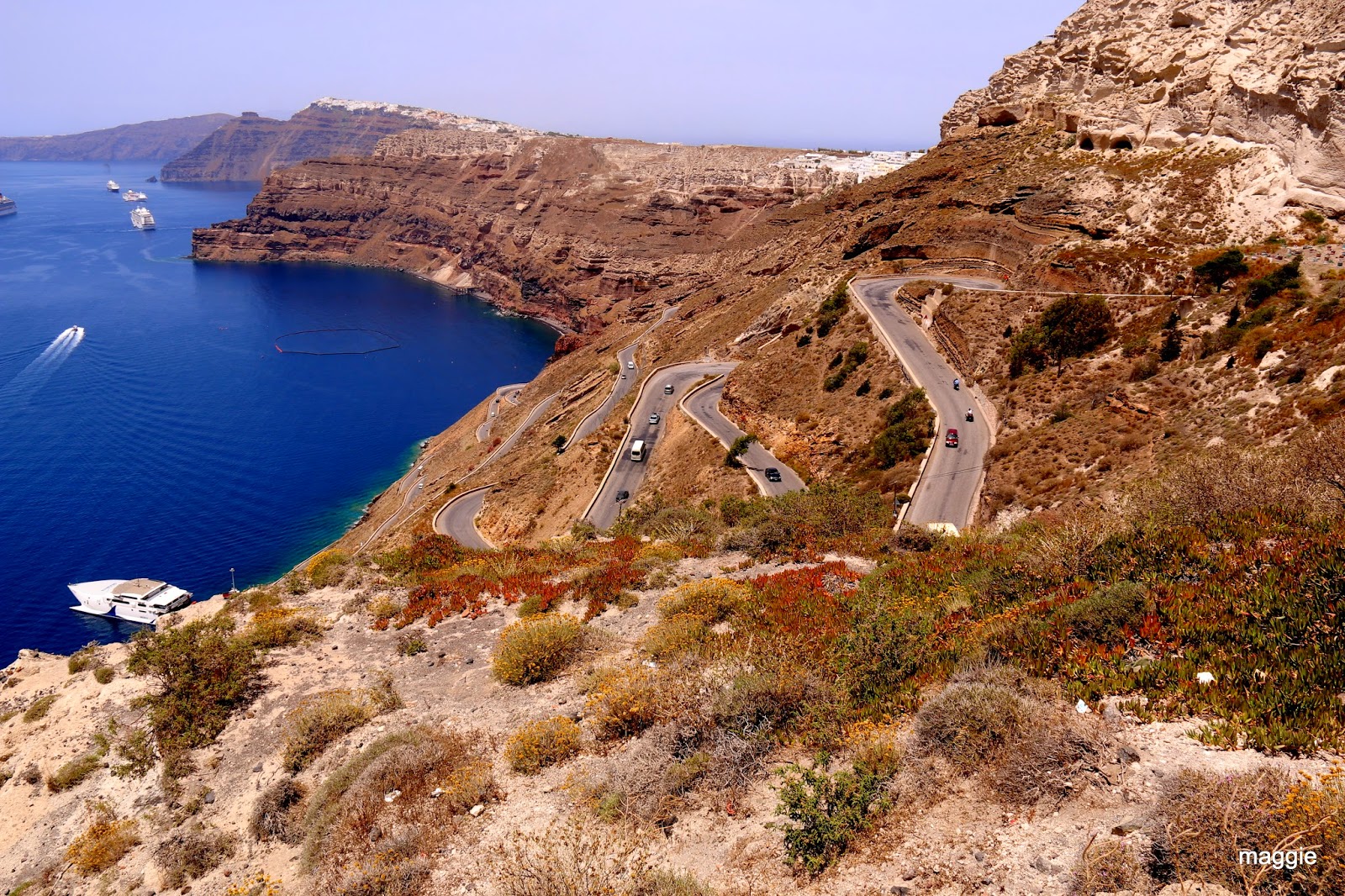 Our last stop for that day was at a Winery not far from where we were staying and it seemed like a good place to end our day :-)

Santorini is quite famous for wine, (I didn't know that), but being a very dry land they don't keep farm animals, instead, income was made from growing grapes and making wine.
The tour and the story of Santorini wine growing was interesting, even if the displays contained weird looking mannequins! 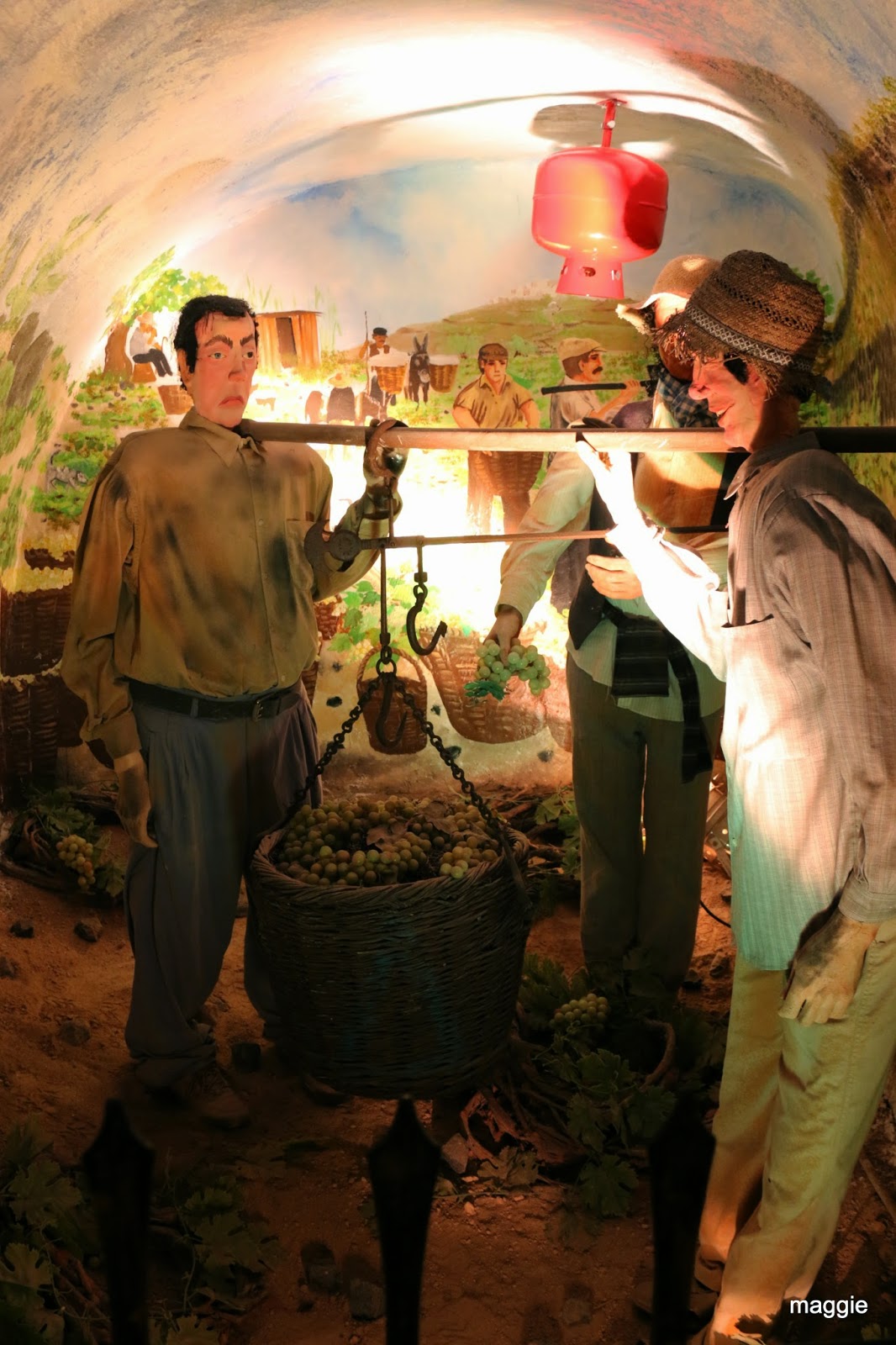 I was impressed by the size of these barrels from the 1800's, kept filled with wine to preserve the wood, they were bought over from France.

I think I found Micheal Jackson hiding in one of the strange displays, lol

The price included tasting 4 wines, one white, one red and two dessert wines.  We are not white wine drinkers and were not too keen on this one.

The red was ok but a little too dry for me. 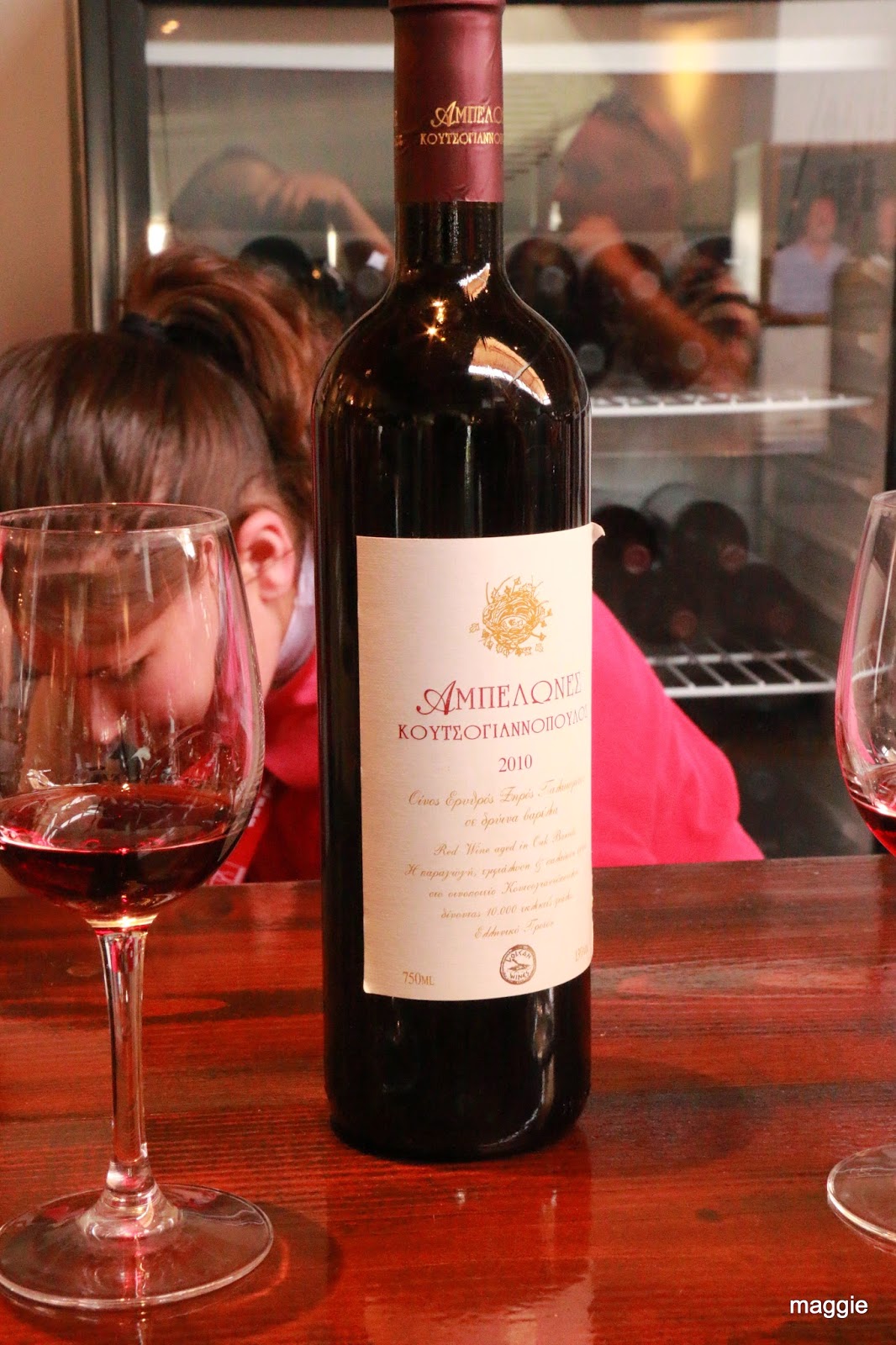 But this! this was the most amazing wine I have ever tasted...ever!
It was so smooth you could hardly feel it going down.
At  €24 a bottle it wasn't cheap but we just had to bring a bottle back with us :-)  We are going to keep it to celebrate when we move into our new home :-)
(Mark did a quick search the other night and can't find it for sale in the UK, if anyone has seen it for sale here please let me know as this won't last for long once it's opened :-) 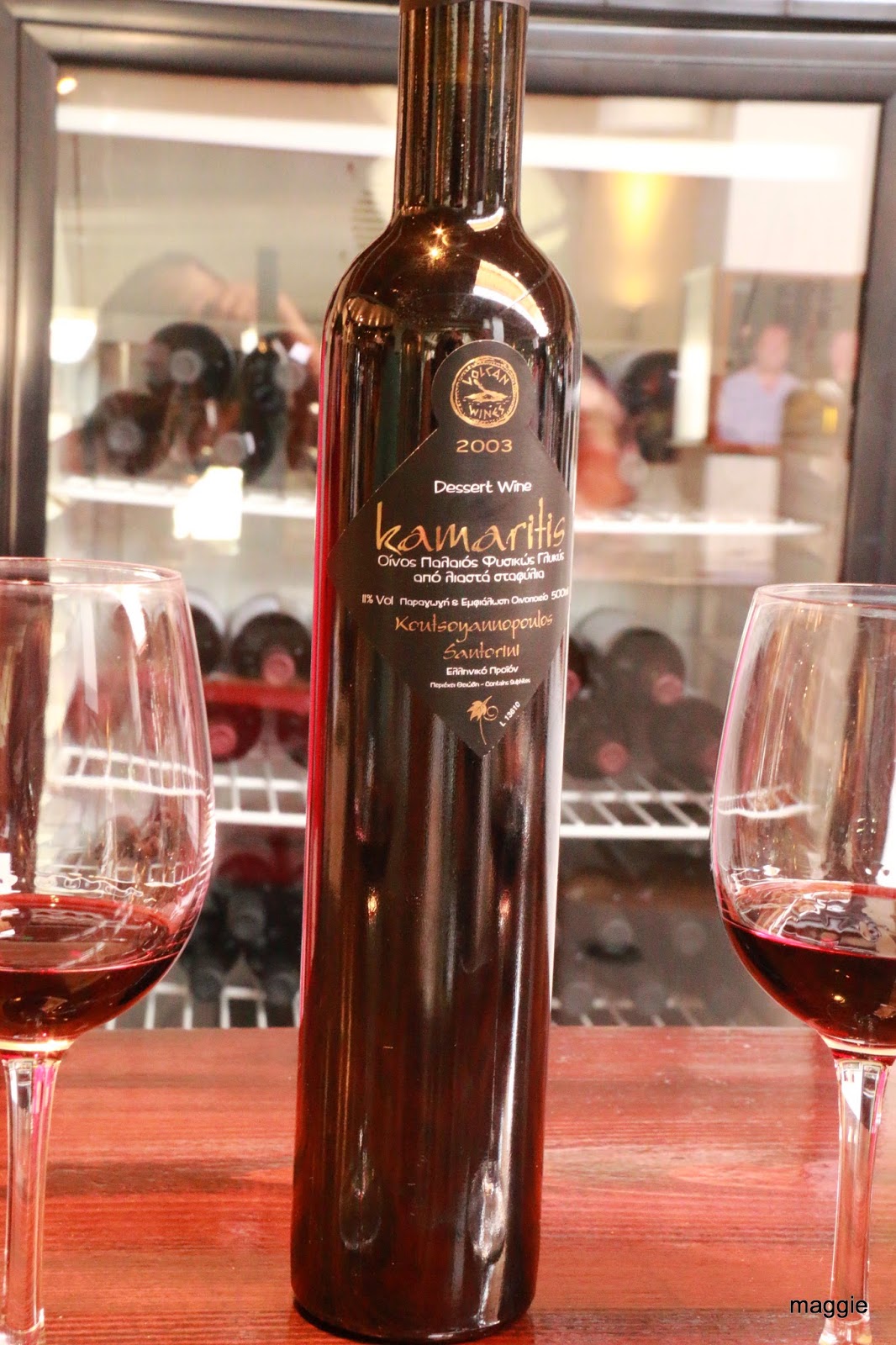 The last wine was also very nice, but by then we had tasted the best so it really didn't matter, lol.

We agreed that hiring the quad was a great idea and we should have done it earlier in the week and had it for a couple of days instead of catching a crowded bus, but we will know for next time :-)

Hope you enjoyed this other little 'tour' of Santorini