Jacobs Christmas stockings was one thing I really wanted to make headway on in July but that wasn't to be.  I waited ages for thread to come in stock and spent another age tracking down one of the Classic ColourWorks threads.  Classic Colourworks, apparently , have stopped making perle #5 thread.  My LNS did have one of the CC colours I needed but not the Purple Aster.  I did eventually managed to track some down online, lucky for me they had old stock.

In the end, July came and went without me putting a single stitch into this stocking.

August stitching was a little better now I had all the required threads but with one thing and another time wasn't on my side. 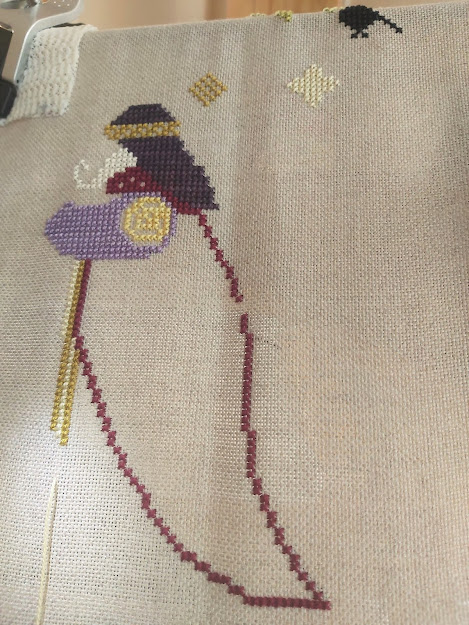 (No idea what that weird blurry patch is on the photo below, must have been a smear on the lens) 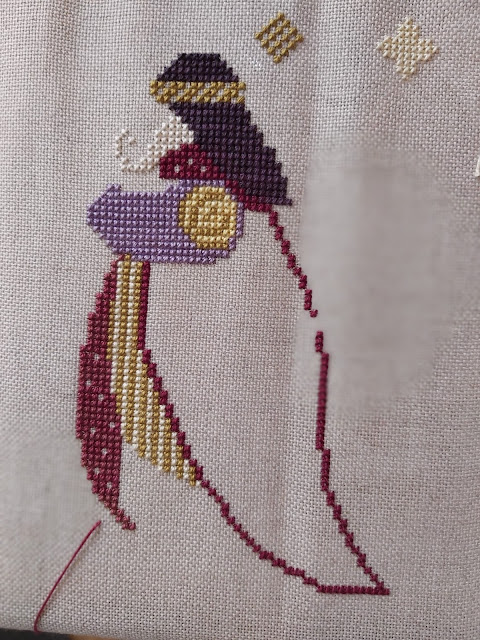 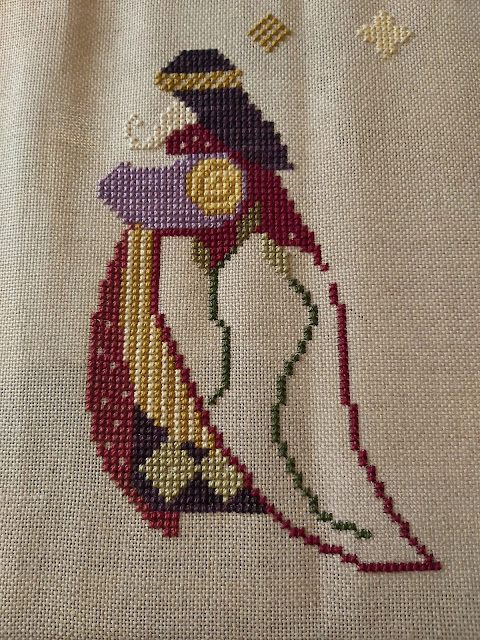 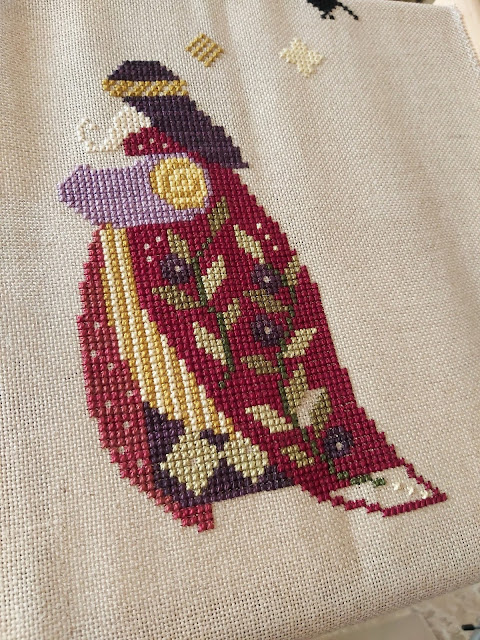 And here is where i'm at so far.  I sat and did a good few hours on Friday and got the coat all done and some of the smaller motifs. 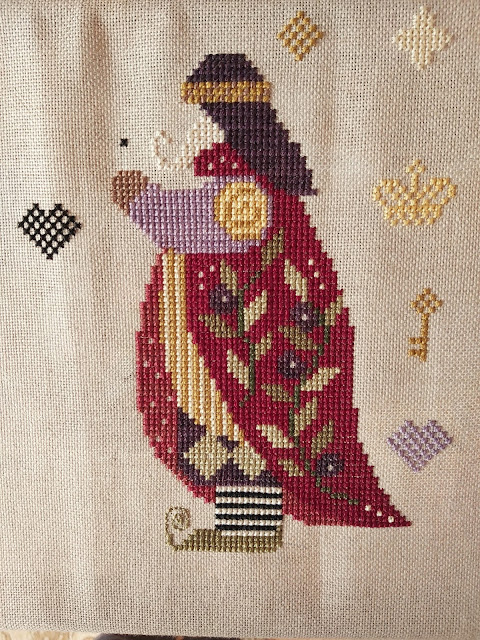 Although I haven't had any stitching time over the weekend I feel like I've done the biggest part now and I'm bit more confident about getting it finished in time, fingers crossed.

I hope you have a lovely week, I'll see you soon

On my day trip to Anker Wood last week I mentioned that there was also a Dobbies Garden Centre on the same site.
I do like Dobbies, they always seem to have something different and the food in the cafe is really good too.  This Dobbies was extremly good, in addition to the usual things you find at garden centres there was also a large butchers, a Ponden Mill (soft furnishings), Peacocks (clothes) and a shoe section, all under the same roof.

We had a good look round and my eagle eye spotted some Caron Cupcake yarn on sale.
At £2.99 I had to pick up a couple to try.

The yarn cake comes with a pompom and on the reverse of the label is either a knit or crochet hat pattern.  I chose the ones with a knit pattern and this is how they came out. 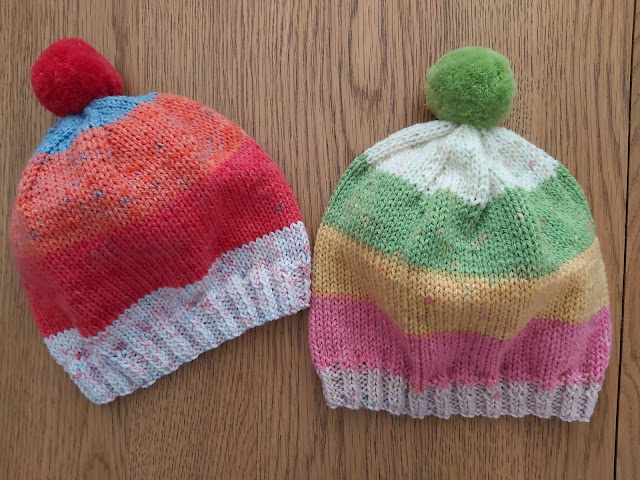 I was pleasantly surprised by the yarn, it was really nice to work with and I think they came out great.  These will be put to one side and appear in Jacob and Bonnie's Christmas stocking

There is enough yarn left from each cake to make another hat, (so you could make two hats, if that makes sense, lol)
I don't want to add these to my stash so If anyone would like the remaining yarn please leave me a comment saying so and I will mail them out to you, including the ball band with the pattern, (of course you don't have to use the pattern on the ball band, it is only just a basic hat pattern).
You will however have to make your own pompom should you want one as the yarn only comes with one per cake. 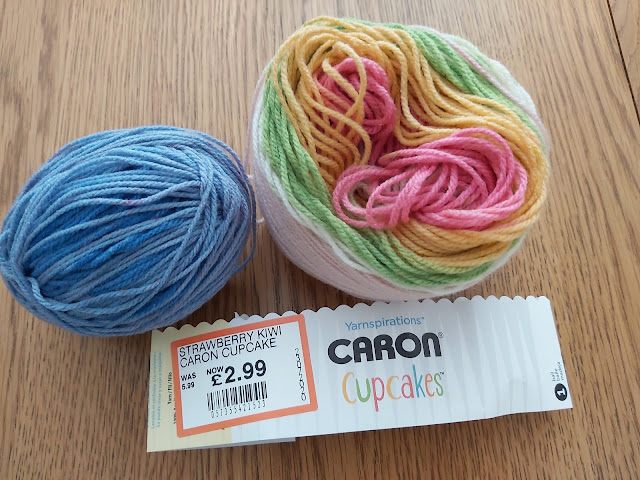 Because of postage costs I'm only offering to post within the UK and they will go to the first person to say they want them in the comments.

I finished the September Calendar Girl for this month.  Only three more of these monthly ornaments left to stitch now, I'm quite impressed with myself for keeping up with these each month this year. 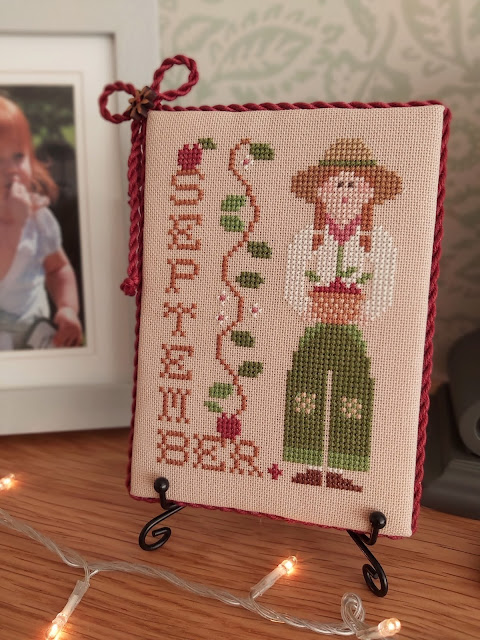 My other finish is The Weathered Garden, I've shown my finish of this one before but I collected it from the framers at the weekend.

I'm really happy with the frame choice, and my LNS always does a great job with framing stitched pieces, but it's got a bit expensive now, this is quite small really but still cost £35, I need to be able to justify whether it's worth spending the money on framing in the future. 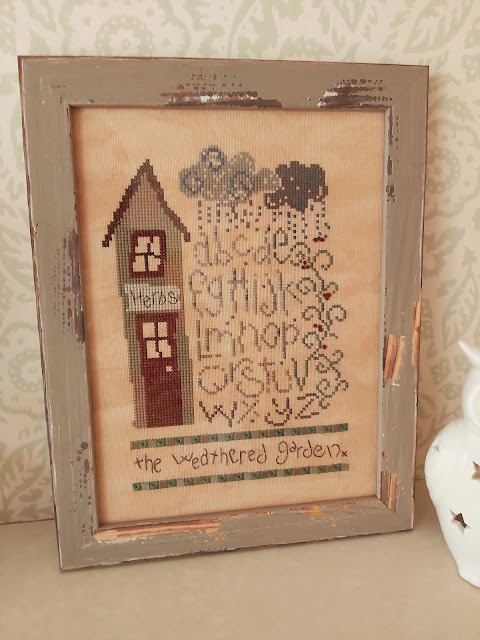 I'm still feeling the effects of tennis elbow but it has improved a little over the last week, I am stitching and knitting but making sure I take regular breaks, I have got a physio appointment booked, via video, face to face appointments are still not happening, I thought it was this morning but I must have got it wrong because I got no call and I accidentally deleted the text so can't check.  Never mind, it's only via a mobile video chat so I haven't 'missed' the appointment.

Just One Dammed Thing After Another

Jenny hadn't realised that September 1st was a teacher training day and hadn't booked the day off work, so Oliver had another sleep over on Monday night and we had a day out yesterday.

I found Anker Wood after searching 'things to do near me'.  On the same site is a Dobbies Garden Centre, so, something for both of us :-)

Unlike last weeks outing there were not many people around at all and we had a lovely few hours exploring the mazes, (there are three), the parkland, looking at the animals and adding some wood to the camps already there, Oliver wanted to build a camp of his own, afraid not mate, were only here for a few hours 😂 He would have quite happily have spent all his time lugging bits of wood around, must be a boy thing. 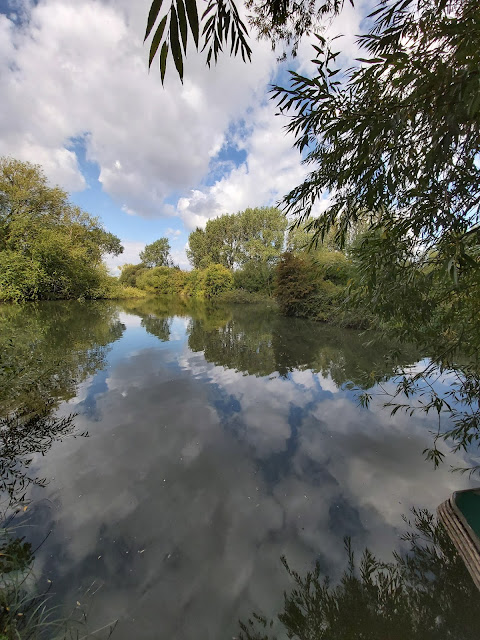 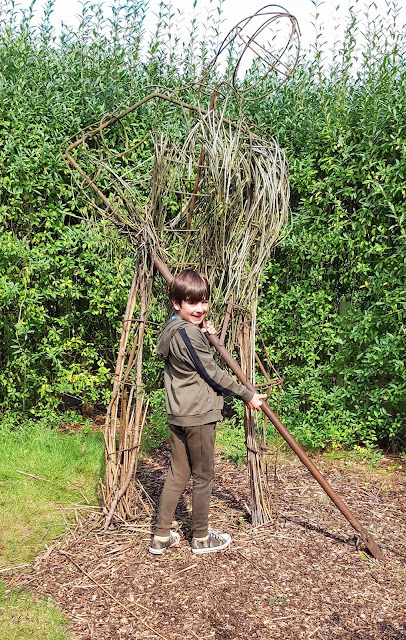 This morning It's back to school and the start of year three, it's going to be a bit strange for everyone after almost six months at home 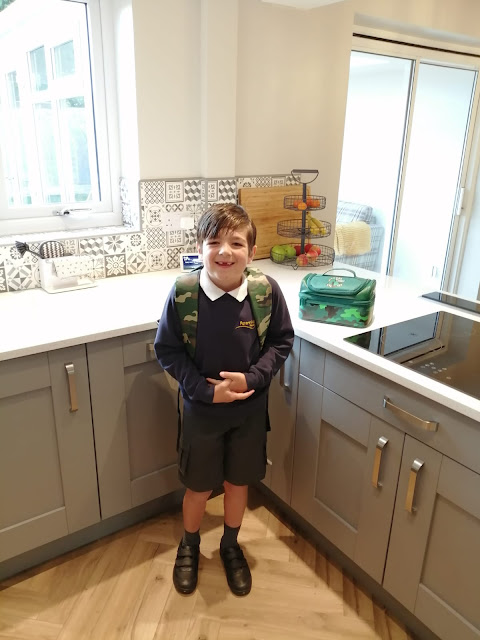 I've been feeling a bit under the weather lately, not quite myself, and a bit down in the dumps if i'm honest.  I got a cold a few weeks ago, I think I caught it off Arty as he had a snotty nose one of the times I took him out, mostly I had the sore throat and dry cough, so you can imagine how it sounded to anyone if I went out!  Just a side note....if you have a cold don't have a menthol sweet and wear a face mask at the same time, your eyes water like billio, as I found out lol.

Just as the cold began to clear up I began to get a lot of pain around my elbow and down into my forearm, It was even painful to lift a cup.  After lots of googling, (because I couldn't get a phone appointment with a doctor for a few days), I found I had all the symptoms for Tennis Elbow.  When I did eventually speak to a doctor she agreed with my internet search!! and recommended taking paracetamol and Ibuprofen for a week, and no knitting, crochet or stitching, or anything that might put strain on my arm.
Well as it's my right arm and I'm right handed that rules out just about everything!
I bought an elbow brace thingy off Amazon and, fingers crossed, not on my right hand cuz it still hurts a little to do that, it's slowly getting better.
With all my internet searching I did read that Tennis Elbow will usually disappear of it's own accord in most cases in six to twelve months.  So I've gone back to my crafting, wearing the elbow brace when I do anything and taking regular breaks as it does still hurt if I have my arm bent for any length of time.

On Monday I enlisted Marks help in the garden, me doing the lighter jobs and shouting instructions to him on what to cut back and I got stung by a wasp, sigh.
Yep, probably payback for all the pointing and shouting at hubby.

Of course, I can't just get stung, I have to get infected too!

It gradually got bigger and bigger and I ended up calling the doctor again yesterday for antibiotics, which in itself was an ordeal because first I had to get past the receptionist!
He called me back within five minutes and asked me to send him a photo on the link he was going to text me.  At the time I was on my way back home from dropping Oliver off and the surgery was closing in ten minutes.

Now this sting is on the inside of my left knee and I have trousers on, you can guess what coming next.

All I can say is, I hope no one saw me wriggling my trousers down in the car while parked at the side of the road!

Bonnie has also been in hospital over-night because of a high temperature, that, thank goodness turned out to be because of what they believe was an ear infection and the start of a cold.

And my daughter, Joanne, who follows me for infected bites was bitten by goodness know what while at the park and is also on antibiotics.

So yeah, Just One Dammed Thing After Another!