I'm so very sad to tell you that my mum passed away in the early hours of Thursday 25th November.

As you know mum went into respite care a few weeks ago following a fall and a rapid decline in her mobility.  Whilst in the care home it became clear that she wasn't going to regain even the limited mobility she had had previously and there was talk of her remaining in the care home where she could have round the clock care, although it was a big change for her she did realise that she needed more care than we could safely provide for her at home.

The week before she went into respite she had been assessed and diagnosed with both Alzheimer's and vascular dementia, although this was still in the early stages, there were days when she got very confused and mixed up, it was hard to see her memory getting worse.

The photo below was taken about 5 years ago at my niece's wedding. 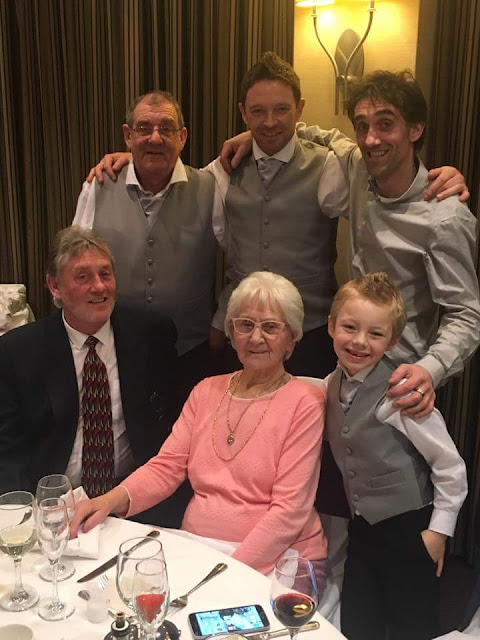 We are grateful that when the end came she was not in pain.  For a good few days she had kept saying that she was so tired, and when she was put to bed on Wednesday night she became unresponsive a few hours later.  She never fully regained consciousness, only occasionally opening her eyes but not acknowledging or speaking to us.

In life she was a quiet person who got on with things and didn't want drama, so it was no surprise that when she passed it was quietly, without fuss.  We were with her the whole time, holding her hands and talking to her.  I'd like to think that she knew she was not alone and that we were there.

Beating them at their own game

I realised as I was looking through my blog posts the other day that I hadn't told you the rest of the story about Marks car being stolen, I thought it would amuse you.

First off let me say that i'm not the most observant person, I would make a terrible PI, you will see why.

Mark had been suffering a bad back that weekend and as we have a memory foam mattress in the second bedroom he had slept in there on Sunday night to see if it would help, that bedroom overlooks the garden.  I got up as normal on Monday morning and opened the curtains, our bedroom faces the front and overlooks the drive.  I didn't realise at first that Mark was still in bed having decided to go in later because his back was still playing up.  I had to pop out so I left him where he was and off I went.

He called me around 10.30am and said 'where's my car?'  I thought he was having me on so I said what do you mean? it's on the drive.  Only it wasn't.  He had got to the front door with his bag only to find his car gone.

I had opened the curtains in the bedroom and not noticed, gone out to my car, which I park right next to his car on our drive and not noticed or registered that his car wasn't there but he was in the house!!!

I was on my way home when he called me and he had been on the phone to the office to tell them and was trying to get through to the police to report it stolen.    Now, the car has a tracker, so the office knew what time it had moved off our drive, where it was and what time it had been parked up and they called Mark back to tell him.....It had moved off our drive at 9.05pm, the engine started at 9.10pm and was parked up at 9.40pm.

I'd been sitting in the back sitting room watching the last episode of Handmaid's Tale so wouldn't have heard anything going on at the front of the house but Mark had been sat in the front room and not heard a thing! (I think you could safely say neither of us would make good PI's) lol.

We have since found out that these keyless cars are very easy to steal, thieves use a device to pick up a signal from the keys in the house, all they have to do is stand on the drive and look for a signal and the car door can be unlocked.   Now Mark's car is one of those big Navara's, when it starts up you can hear it, he would have heard it, our drive has a slight slope to it so we think they must have rolled it back and let it roll as far as it would and then started it away from the house.  It was then driven less than 10 miles and left on a side road on a small estate.

That's apparently what they are doing now, stealing a vehicle parking it up somewhere and waiting to see if anyone comes for it, if it's still there in a couple of days they go back and collect it and do whatever it is they do with stolen cars!  But, as we knew where it was from the tracker we drove there and low and behold his car was parked up, nothing damaged, all his tools in the back, everything still as it was inside, except his phone charger, they had taken that (!)

Another thing we didn't know, if you have a keyless car your 'key' should be kept in something metal to block the signal.  Lesson learned