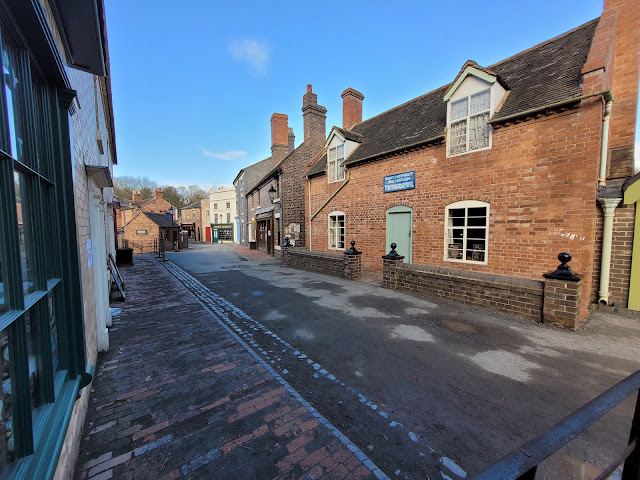 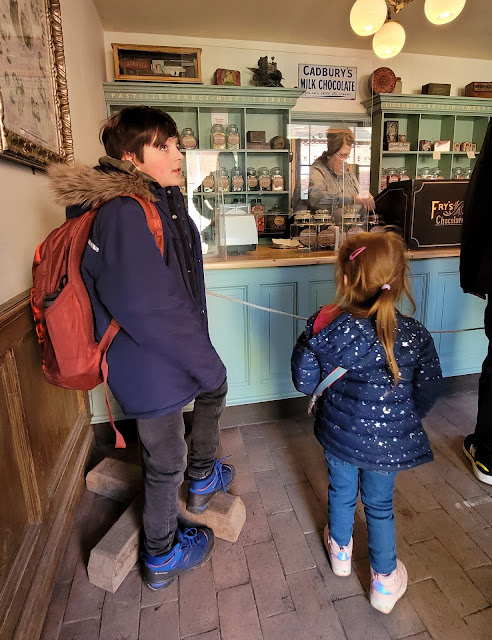 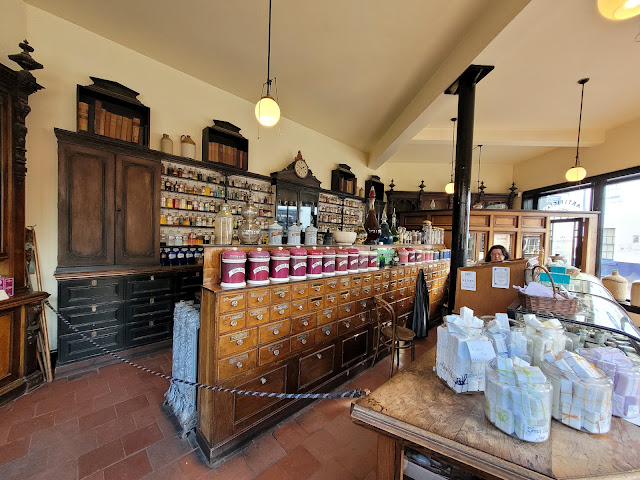 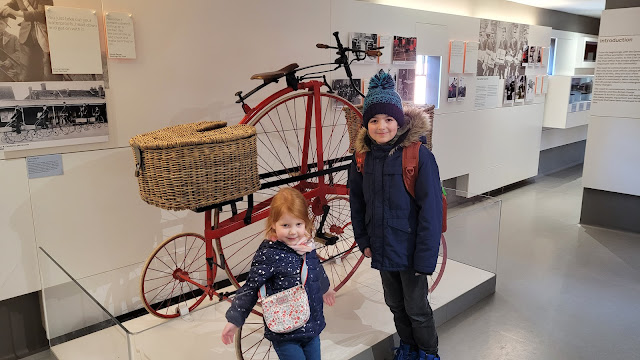 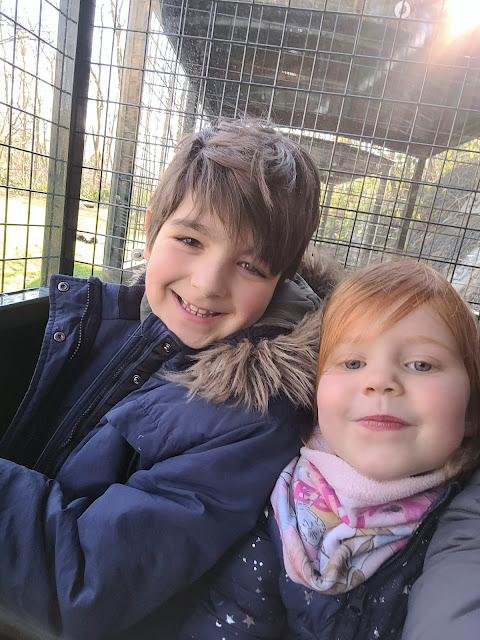 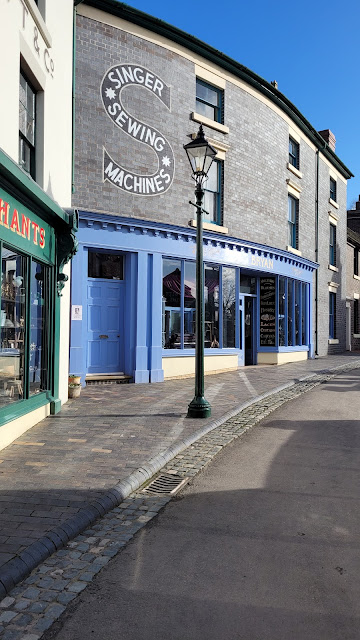 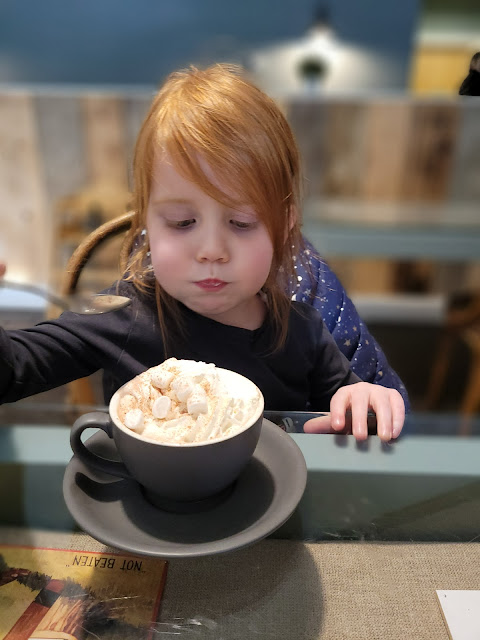 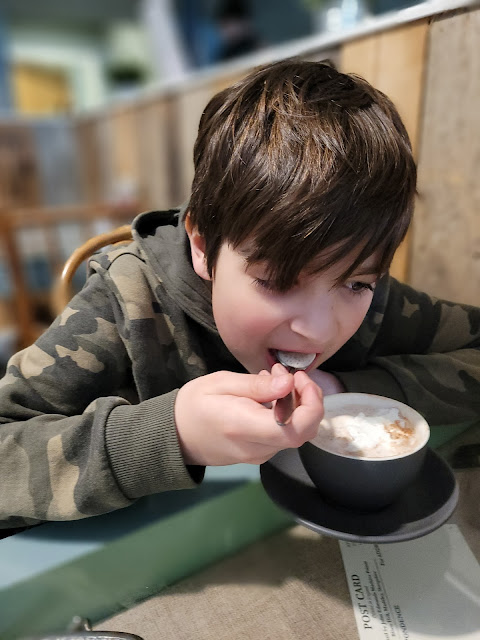 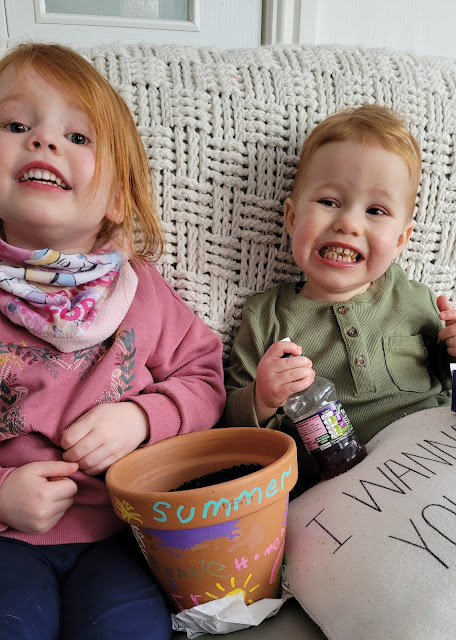 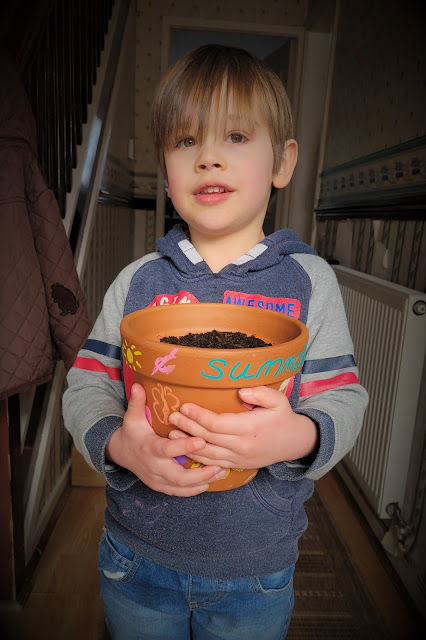 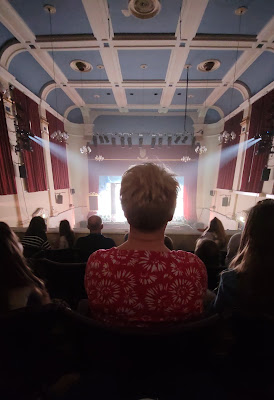 Last week was half term here and as Joanne was at work I looked after Bonnie and arranged for us to do a few activities during the week.  On Tuesday we had a day out to Blist Hill Ironbridge Gorge museums.  Blist Hill is a Victorian Town living museum, similar to The Blackcounty living museum I've blogged about before Here.  I think I preferred it, there were people in each of the shops and all were friendly and very knowledgeable about the era.
On Thursday I managed to get us tickets for the pantomime, Snow White, at the local Town Hall.  Panto's usually happen around Christmas time and into January but I think this one, which raises money for a local hospise, usually happens at the February half term, we were at the last show.  As you can see from the last photo we ended up with balcony seats, it's not a huge venue so that's not really a problem, and Bonnie could see because there were children in front of her seat, but, I had a giant of a woman in front of me!  This is the view I had of the stage if I sat straight in my chair, yeah, not good, I spent the whole time leaning towards Bonnie's chair so I could see.
On Friday I took Bonnie and Arty to a local garden centre where they decorated a teracotta pot in which they then planted some sunflower seeds.  Arty was so pleased with his, of course he had to draw a slug and a worm on there too, ha ha.
At last the wind has died down and the rain stopped, there has been flooding in both Ironbridge and Bewdley.  I love visiting Bewdley and feel terrible for the residents on the river, the flood barriers on the one side were not enough to stop the water and yet again their houses were flooded.
Image taken from google 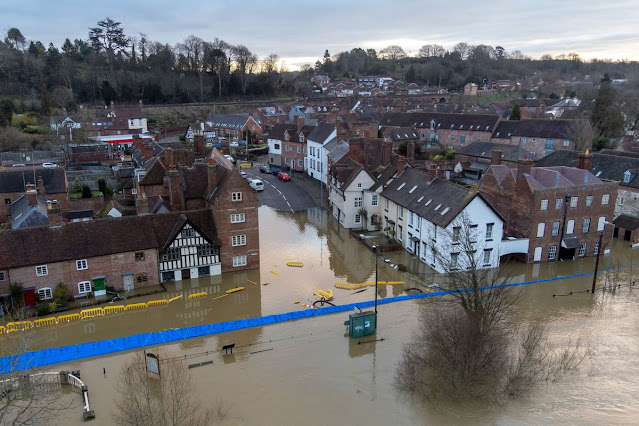 The road between the buildings is the one we usually take to get into the town when we visit, the white house on the right has only just been renovated after the last time it was flooded.  It must be just so awful, and scary.  Luckily the flood barriers on the otherside of the river were higher and held back the water this time.  I've read today that the water levels are now falling but there will be a lot of clean-up work to follow.
-X-
See you soon...... Maggie 7 comments:

Not done a lot 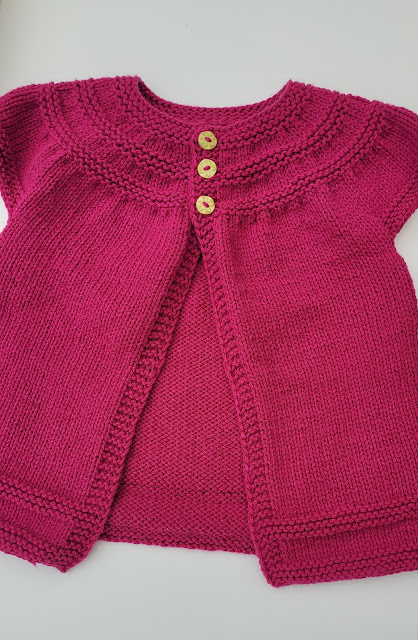 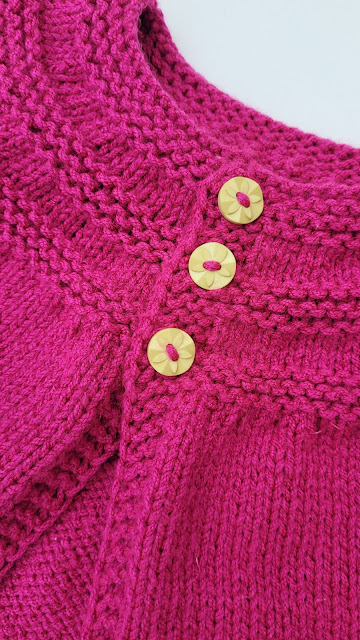 This little In Threes Cardigan is about the only thing I've finished so far this month.  This wasn't a planned cast on, I was looking through some stash and this yarn was amongst it.  I think it's a wash and wear yarn, I've had it so long and no longer have the ball band, it was nice to work with and I know it will stand up to being chucked in the machine and still keep it it's shape.
I still haven't finished my jumper, I got fed up working on the sleeve, although, If I made the effort I could probably finish it in a couple of nights, there are only  a few more decreases and then the cuff to knit, not much at all.
I pulled my back three weeks ago and just haven't felt like doing much, that first week was a real struggle, getting dressed in the morning was an acomplishment in itself!
I was putting off going to the doctor because, well, they only tell you to take painkillers and rest don't they.  But, it was working down my leg so I did go in the end, and yes, I was told painkillers and rest and given a set of exercises to do, but at least it ruled out anything else, not siatica, not coming from my hip, it was just a case of me pulling something.  Thankfully after a week of cocodamol and doing the excersises I'm feeling much better.
It's half term this week and I have Bonnie staying over, it's the first time she's been for a sleepover, she was fine last night, didn't want to sleep in the single bed though, she wanted to sleep with nanny.  She was fine, never stired all night, I on the other hand had an awful nights sleep, lol.
I'm dropping her back home at lunchtime so I can go to my book club, (daddy is working from home), Joanne will bring her back round later, it just saves Joanne some time in the morning when she goes to work.
It's still wet and windy here, much the same as everywhere else in the UK.  One of our fence panels has fallen victim to the winds, it's not broken so should just slot back in place.  Mark cancelled his flight to Belfast for this morning, there was a very good chance of flights being cancelled because of the weather, so he transferred it to tomorrow in the hope that things will be a little better.
I have a few things booked to take Bonnie to this week so hopefully I'll be posting again during the week, and will also get around to visiting blogs too
-X-
See you soon...... Maggie 11 comments: 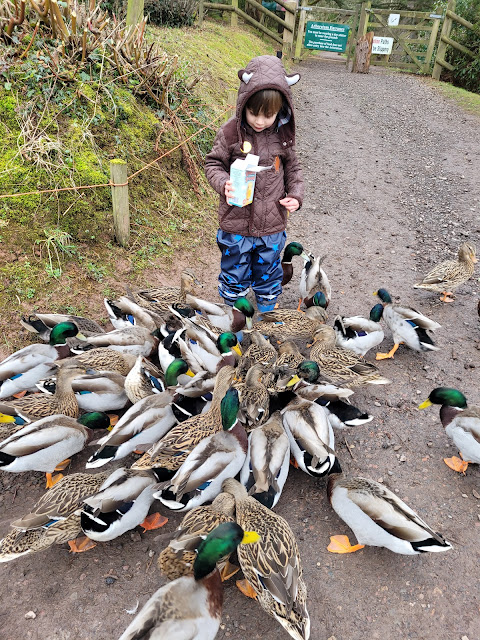 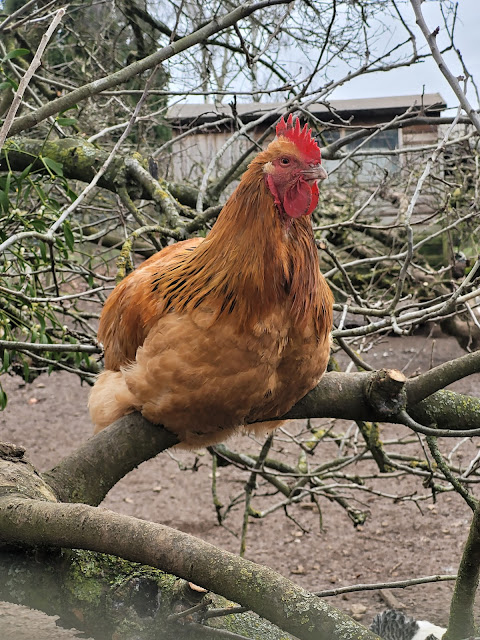 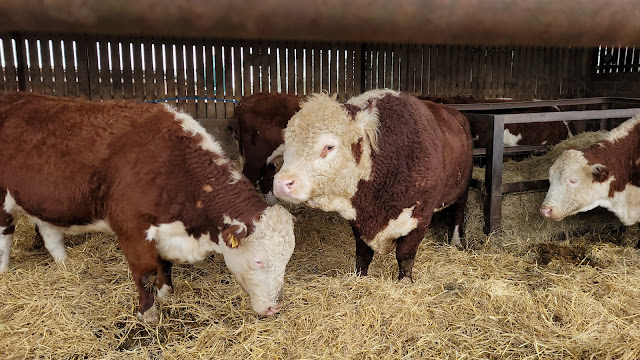 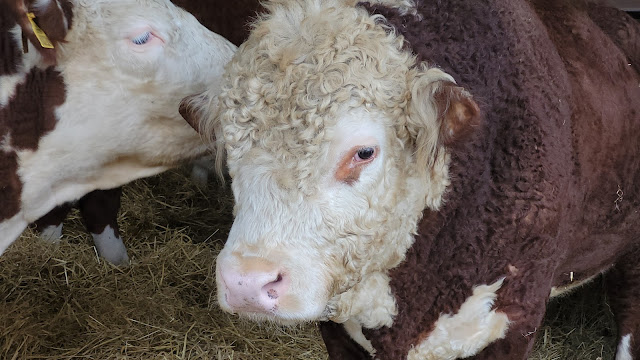 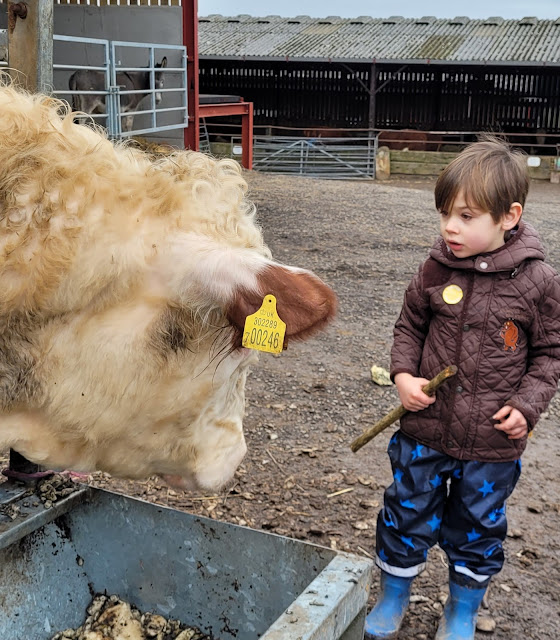 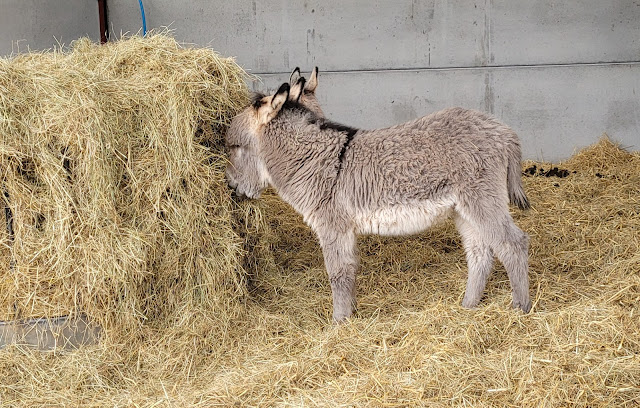 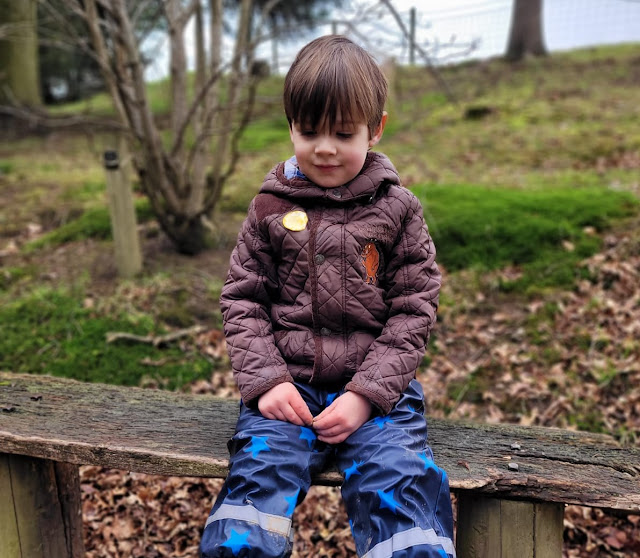 It's been a while since I last visited Bodenham Arboretum, probably more than twelve months.  The weather was quite dull this morning but Jenny said she was taking Arty and asked if I wanted to go along too.  I haven't been getting out a lot recently so jumped at the chance to get some fresh air and spend some time with them both.
It's rather bleak looking at the moment with the bare trees and mud, lots of mud despite there not being much rain recently, it still made for a lovely walk though.  We bought some food for the ducks as we went in and, as you can see they were rather hungry, Arty didn't know what to make of them all crowding round and in a panic emptied all the food out at once!   We bought another box on the way out and he did the same again!
Over the other side of the pond is the farm, it's a working farm but you can go and see the animals.  What cute faces the cows have.  The sign said they were Hereford cattle, I love their cury hair and long eyelashes, although I forget how big cows are until faced with one, Arty looks like he is thinking the same in the photo.
The best thing was the baby donkey though, how cute is he!!! Awww, I wanted to bring him home and Arty has decided he would like one for his birthday.
Not too sure that he will be granted that particular birthday wish.
-X-
See you soon...... Maggie 15 comments: