My week off work has finished, it will be back to being awakened by the alarm in the morning, i could so get used to getting up when i feel like it and pottering around the house, and the weather have been very good to me too. i don't do sitting in the garden really, much prefer there to be a pool i can dip into to cool off when it gets a bit much. On Monday we went to Blenheim Palace, which as you probably know is the birth place of Sir Winston Churchill, and a very impressive building. 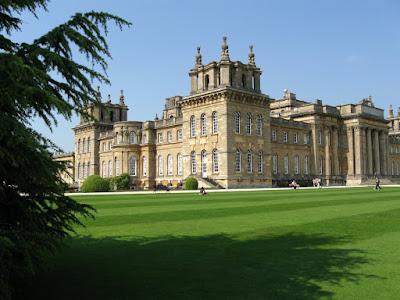 How about this for a back garden! don't think I'd fancy the job of mowing and edging though! 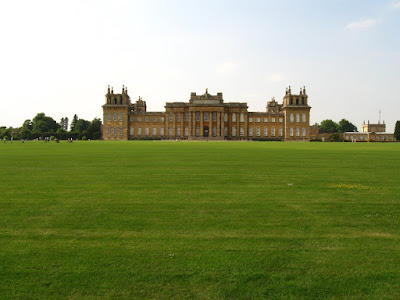 Capability Brown designed the gardens, which are huge and very beautiful. We didn't look round them all, this is the water garden. 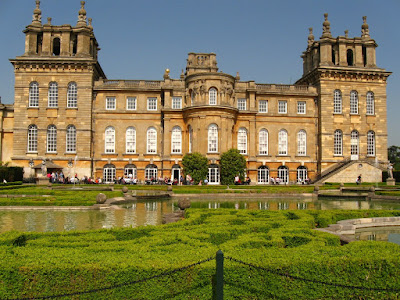 And i was dead jealous of the Hostas in the Secret Garden - they were HUGE!

Inside the rooms were very large, as you would expect, no photographs were allowed (why i don;t know) i usually get around this by disarming the flash and holding my camera in front of me then no one can tell! best not to share those photos though, i don't want to get done for breech of copyright! We were able to exchange our 1 day pass for a 12 month pass on the day we went so we will definitely try and go back again - I'd love to go again at Christmas time and see the rooms decorated.
~~~~~~~~~~~~~~~~~~~~
I've been getting lots of stitching time in this week too, usually i only stitch in the evenings but I've been parking my butt down in the afternoon and getting a few hours in! I made good progress on my ABC, which I'll show you next time, this time i wanted to show you my new start. i bought this when i went to the Craft show at the NEC in March

I'm using 28 count with Gentle Art threads - I'm loving the way the threads are giving it a faded subtle look & I'm surprised at how fast it's stitching up. I now have 4 WIP's, and this from the woman who not so long ago said that she couldn't cope with more than one project at a time! I blame you lot out there leading me astray, LOL. The next part of AT has been released so I'll be working on that for a few days next week. Hope you all have a great week, the sun is shining beautifully again here but i am going to sit in the cool of my sitting room and stitch, i may venture out into the garden later with the hosepipe and give everything a good dousing. Thank you for visiting me and all your lovely comments, see you soon..Tara-a-bit x

Phew! What a Scorcher!!

I think we finally have a taste of summer here in the Midlands, it's scorching!! but shhhhhh, i don't think the sun is aware that it' Bank Holiday weekend, so lets not say anymore in case it changes it's mind!!
I didn't see too much of the big round yellow thing in the sky yesterday except through the window, i was painting my daughters room all day, didn't come up for air until around 6.30 and was in bed for 10.00, knackered! Mark picked up all her stuff from uni yesterday, it's all now in boxes in the cellar waiting to be sorted. she has come home earlier than planned that's why we've had the rush with the bedroom, she had a falling out with one of the girls that she shared with at uni, I'm not sure what exactly happened, and to be honest, i haven't gone into it in great depth. Sorry if i sound a bit un sympathetic, I'm not, it's just that Joanne is a bit of a drama queen and i don't want to get involved in the argument, they are adults after all, Joanne is 21 and the other girl is 22 or 23, so big enough to not have school girl fallings out - you would think!


The last 2 weeks I've redecorated 2 bedrooms and i can tell you i ache in places i didn't even know i had! Do you ever wonder how one family can accumulate so much stuff?? I'm through with hording, so the local charity shop is going to get some new stock in the next couple of days!
~~~~~~~~~~~~~~~~~~~~~~~~
I have managed so stitching in amongst the chaos that has been my house this week - This is AT with part#5

I love working on this piece! part 6 is due out around the 1st of June i think. I was in a slight panic about the threads but i'm happy to report that i have gotten my eager little mits on 3 more skeins from Sew and So. I had to wait a couple of weeks, it seemed that as fast as this colour came in it was delivered out in back orders, obviously I'm not the only one in love with Bleeding Hearts 1089!! I can see no difference in the shade either now that Threadworx have taken over NN, good job! as much as i love this piece i don't think i could have gone back to the start!
I've also finished part 2 of the ABC SAl - this is how that's looking.

It's not a great photo, it looks as though there is a staining on the fabric, there's not, i think it just must be shadow from the thread. I think there have been 6 parts released for this one now so I'm going to be way behind on the finish.

Thank you for all the lovely comments on my Paris photos in my last post, i've still yet to make a album of the others, i may get around to it this week as i have the week off work Yayyyyyy!! so looking forward to that, a whole week at home to just please myself!

Hope everyone has a wonderful Bank Holiday, and enjoy the sunshine, (shhhh) Tara-a-bit x

Don't panic I'm not about to start speaking French, anyhow from what i remember of my school taught French i would be hard pressed to utter a complete sentence let alone write it down!, how embarrassing is it when us in the UK visit France and have to resort to asking people on the street if they speak English? very i can tell you! and the reason i know this is i have just come back from a visit to Paris!
It was Joanne's 21st birthday in December so this was her belated present from us, Mark stayed at home with Stevie, so it was Joanne, Jenny & me who hit Paris on May 1st.
We did all the usually touristy things, first on the list was the Eiffel Tower, Joanne was a bit disappointed because it was a brownish colour and not the silver colour she was expecting! The ques to go up were stupid so we didn't bother, just had a walk around and took quite a lot of photos. 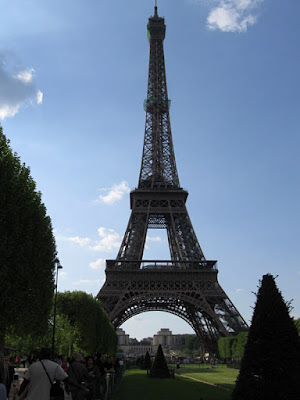 This is what Joanne meant by the colour, i don't think it looked too bad, if you look close though you can see green netting, there was work of some sort going on, maybe that's why the ques were so long. 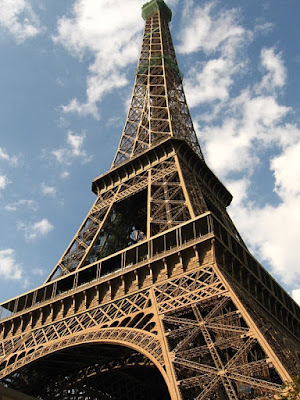 We walked up the Champs-Elysees to the Arc de Triomphe, i didn't realise that you could actually go to the top until we got there, you have to climb a billion steps though. OK slight exaggeration but by the time i reached the top it felt like it! Well worth it though for the view of Paris.

The Sacre Coeur was well worth a visit, the church is the second highest point after the Eiffel Tower and yet again there were more steps to climb to get to the church, my legs and bum have not had this good a work out since i stopped going to the gym! 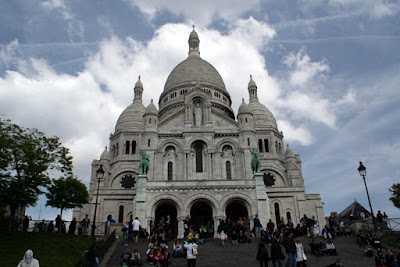 You can also climb to the top of the dome, 300 steps!! and yes i did do that too! Again, great views and worth the pain!
~~~~~~~~~~~~
We had to que to get inside Notre Dame and i must say that i was not blown away by the inside. It seems that you can climb to the top of all the buildings in Paris and this one's no different, however i didn't feel inclined to join the que this time so can't tell you what there was to see. there were several beggars around this area too; 2 women on either door of the church, one approached us while we were queuing, others were around the bridges. 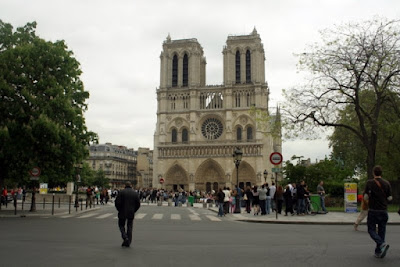 The famous Moulin Rouge, it would have been nice to see a show but at €150 a ticket we gave it a miss! Something else that i didn't realise was that all along this strip there were lots of adult shops, if you know what i mean ;-) But not in a tacky way, they were just there.

And just to put a face to a name this is moi outside the Louvre.

This is Joanne picking said pyramid up. There were these little stands all around and we could only think that they had been placed there for people like us to pose for silly photos like this! 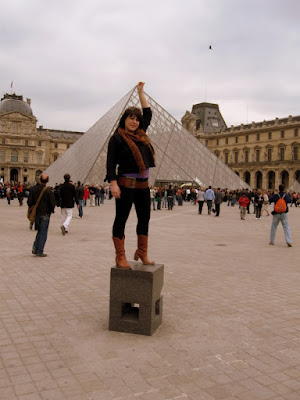 And Jenny doing this! 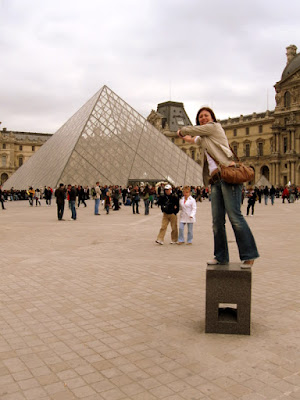 Back to a full week at work tomorrow, only did two days last week so that will be shock to the system, plus i will have to get the bus a couple of days while my car is in the garage, it failed the MOT and has to have some work done, nothing major but i hate the inconvenience of not having a car to jump in. I have a dental appointment on Wednesday too, the dentist was able to save the tooth i broke and is fitting a crown which i am expecting to be diamond encrusted going by what I'm having to pay for it! Hope you all have a good week whatever you may be up to, thanks for stopping by, Tara-a-bit
See you soon...... Maggie 22 comments: