You really couldn't make this up!
~~~~~~
It turned out to be a day and a half yesterday.   I started the day by falling down the stairs, top to bottom, wrenched both arms backwards trying to stop myself and banged my foot.  It did knock me for six but i carried on...as you do, with the weekly ironing.

Then i get a text from my eldest sister to say they have taken mum to the hospital because she was having palpitations and trouble breathing, she'd been given a ECG and was waiting to see the doctor.  So off i go to the hospital, my foot was hurting but not too bad, i could walk.
We waited 5 hours in A&E, yes you read right, they gave an 82 year old woman an ECG then left her in the A&E waiting room for 5 hours, i did go and ask how much longer, a couple of times, but you know A&E, makes no difference.  When she was eventually seen by a doctor he did a thorough examination and he was very nice with her, they checked her blood, that was OK but the doc didn't like the look of her ECG so she had to stay in over night.  My eldest sister stayed with her while me and my younger sister went to her home to collect overnight things.  By then my foot was starting to hurt more.  Took mums things back to hospital, i was having trouble walking then but got on with it.  Another couple of hours with mum in the Emergency Assessment Unit waiting for yet another doctor to come and check her over and confirm that she was to stay in, yes, she had to stay in and have another ECG in the morning then they would compare them.
We had to ask 3 times for a blanket and pillow for mum, she had had nothing to eat or drink since about 2 o'clock that afternoon, a nurse said they would bring a plate of sandwiches and a cup of tea, which never arrived and the shop had nothing left except some muffins!  We asked again and she was bought a packet of sandwiches with a choice of ham or salmon, nothing to drink, so off again in search of a vending machine!

So by this time my foot is really killing and by the time we left at 12 o'clock i was having real trouble walking at all, but i was the one driving.  We went back to mums to feed her cat and turn off lights etc.  Went to open the door to go, it wouldn't budge, we were locked in the house!.  Julie, my younger sister said, I'll climb out of the window and unlock the door, no can do, the windows are locked and we didn't know where the key was.  We then had to call my BIL to come up and let us out!!  He had to help me to the car and off home i went, Joanne took one look at my foot and said, mum i think you should go back to the hospital (my foot was a funny colour and swollen by this time)  So off we go again, Joanne drops me and Stevie by A&E and goes to park the car, but i can't walk at all and am trying to hop across the car park, Stevie trying to hold me up without laughing to much!  There was a guy stood outside the door who came to our rescue with a wheelchair, bless him, i don't know how we would have got to the door if he hadn't come to rescue us.
This time, thankfully, we didn't wait too long before i was seen, but while i was waiting for my xray the doctor who had seen mum earlier walked past and did a double take and came back and asked what I'd done and went away shaking his head, lol.  After xray i was wheeled back and the same doctor came past again and asked if i had been seen yet, (no i hadn't) he said he had finished his shift but would get the Doctor to have a look at me and my xray.  The doctor on duty didn't come, but he did and looked at the xrays himself and examined my foot coming back with the news that it was indeed broken!!
So now i look like this.. 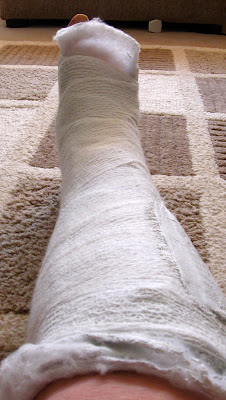 I have an appointment at the fracture clinic on Wednesday afternoon to have this plaster off and another xray and then they will decide whether to put another cast on.~~~
~~~
On the upside i will have plenty of stitching time over the next couple of weeks (insert big grin here!) 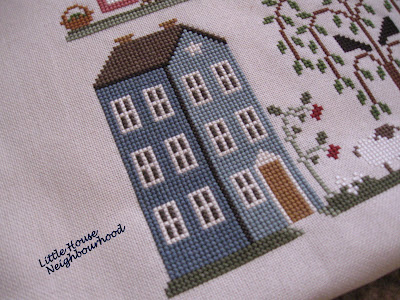 And the whole thing so far. 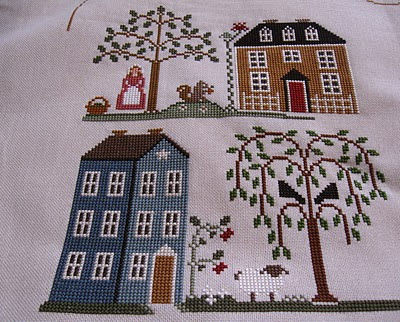 Mary Glover had an outing at the weekend. How pants is stitching over one!!  I think i stared at it for ten minutes before attempting a stitch, then when i did manage some stitching i ripped them out again.  Finally i think i got it sorted, i still have the alphabet underneath the words to do and i will grit my teeth and get around to that this week. 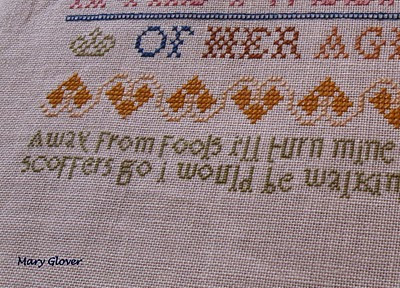 Saturday was a better day than yesterday with the Hobbycraft and Sewing for Pleasure, i had a lovey day out and gsome goodies which i will share with you another time.  For now I'm going to catch forty winks as i didn't sleep very well last night.
Take care
See you soon...... Maggie 35 comments:

I'm happy to say that the rain eventually cleared on Saturday and the sun came out long enough for us to have a brisk walk by the sea.  Photos to show later, but first i must show you what Elaine sent me as a belated birthday gift﻿.
First a lovely stitched and finished pin keep - so cute :-) 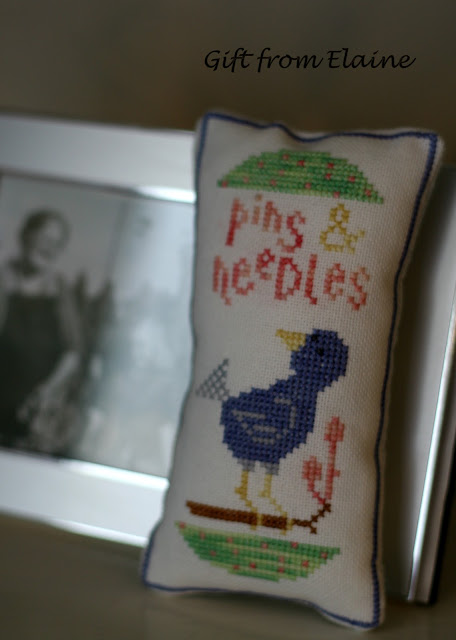 A great chart, some needles and a pair of scissors, she also included some coloured pins but they must be on the very edge of the photo 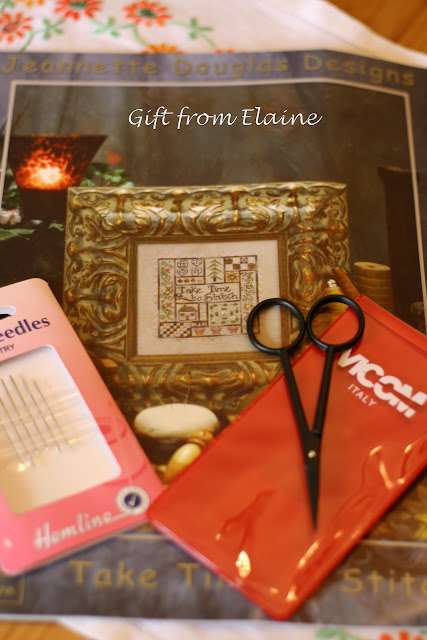 Thank you Elaine, i love everything :-)
I made a start on Littlehouse Neighbourhood back at the beginning of February (wow, where did that month go!!)  As you can see not a lot of progress, but i enjoyed putting in what stitches are there. 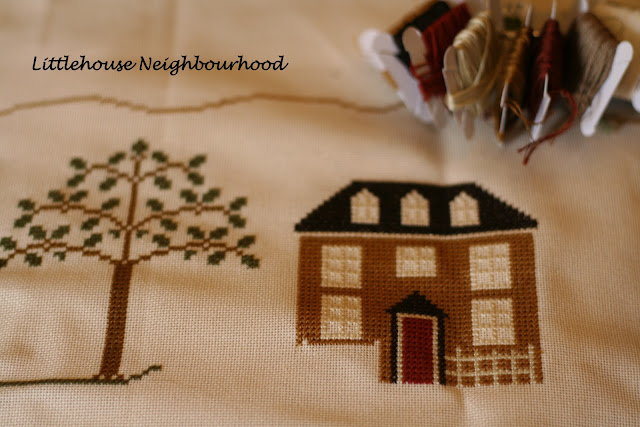 I have Siobhan to thank for my next new start because i first came across it on her blog, you must have seen it on endless blog posts by now but here is my start on Mary Glover anyway. 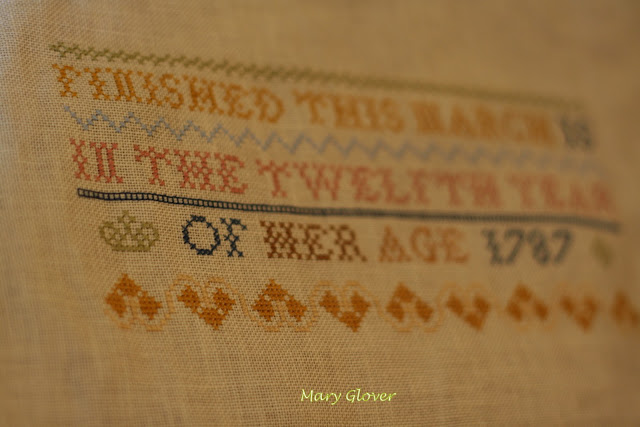 So lovely to work on.  I'm almost caught up the first three parts now, just the verse over one to stitch, should be interesting, i have trouble counting at the best of times and to go from over two to over one might tax my little grey cells.
So, back to the weekend in Weymouth, i didn't get any shopping done in the end, we opted just to walk and look around, i did drag Mark into a tea shop to partake of a cream tea, not really the thing that builder blokes go for but he knows i can never pass up on the opportunity for a warm scone with jam and clotted cream, in fact i can very rarely pass on the opportunity of cake of any description:-)
See how the wind wipped up the clouds, aren't they great, i love big fluffy clouds, lol 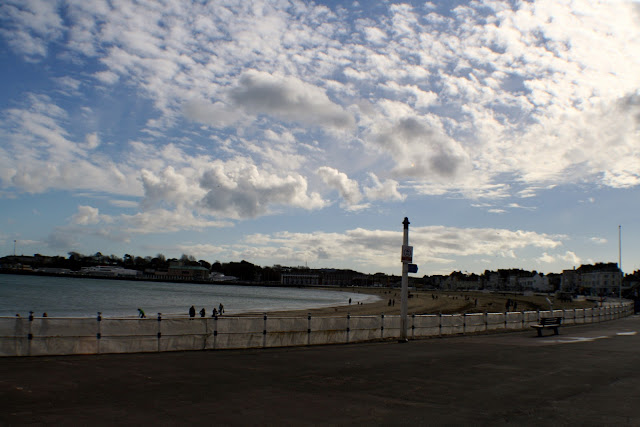 Here's some more over the Harbour 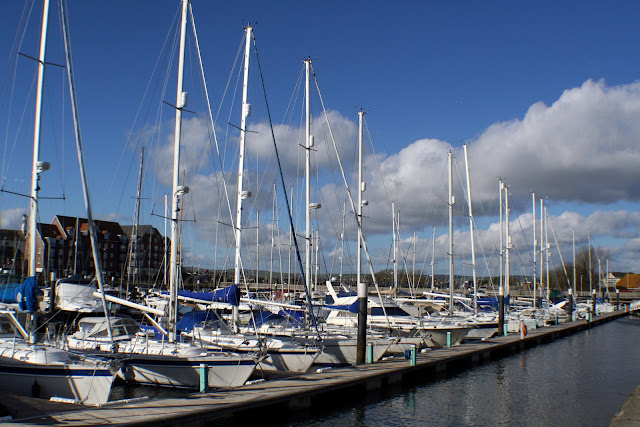 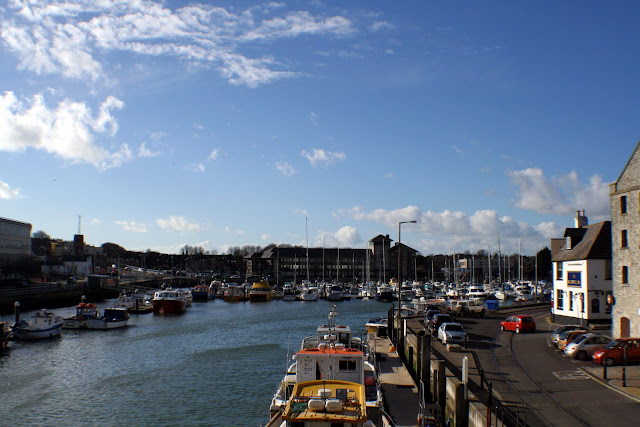 I've only been to  Weymouth once before, when the girls were smaller, but i remember the clock, when i mentioned it to Mark he said he couldn't remember seeing a clock although he has been there since January and must have driven passed it several times, i swear he goes around with his eyes shut, lol, i mean, how could you miss something like that!
The Jubilee Clock - built to commemorate Queen Victoria's Golden Jubilee. 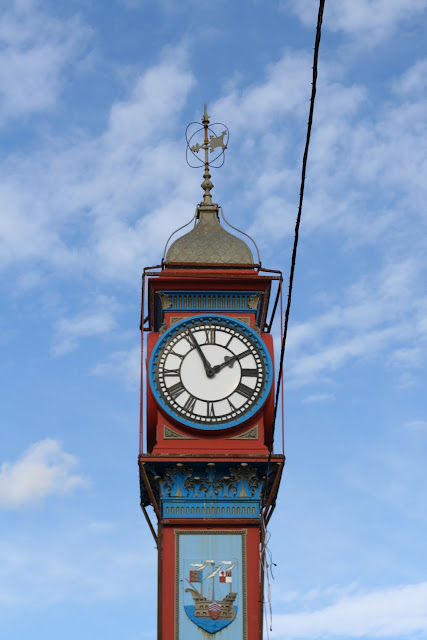 I would have loved a photo of the whole thing but there are some major road works going on and they chose the base of the clock to store that horrible orange netting and barriers.
Here is another fantastic building on the sea front 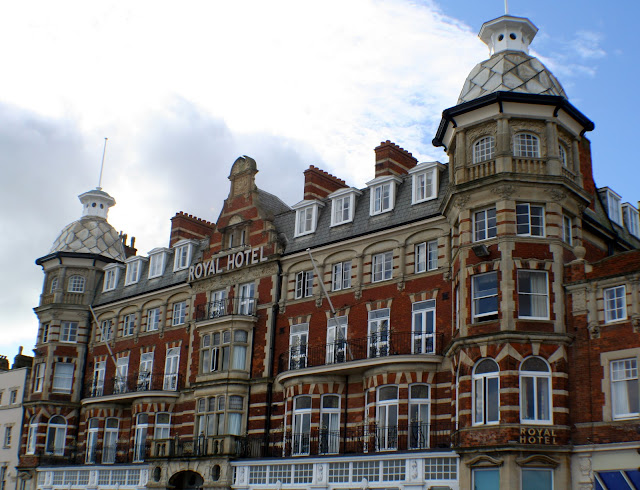 This church is just at the back of the holiday park Mark is working at, a really lovely place, and the grounds are kept very neat.  Don't you just love that entrance! 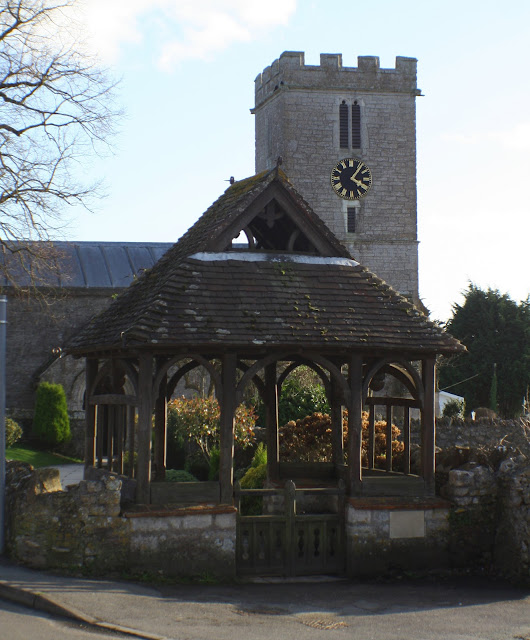 I cropped the next photo down and it does look a little squashed but i liked it because it shows the horse on the hill in the background, can you see it?

I was told, rightly or wrongly(someone may be able to confirm or dispute this perhaps?) that the horse was put there because George III used to ride his own house up and down that hill.
And on that note i will leave you, i have to get into my own chariot now and collect my daughter from work
I will share a few more pictures on my photo blog over the next couple of days.
See you soon...... Maggie 21 comments: