Just wanted to pop in with a quick round up post for 2018.

Now I look back there have been more finishes than I thought, so here they are, in no particular order. 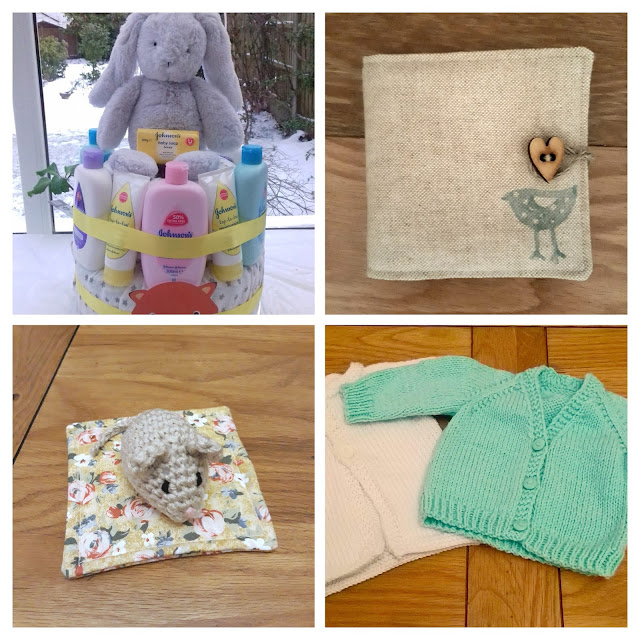 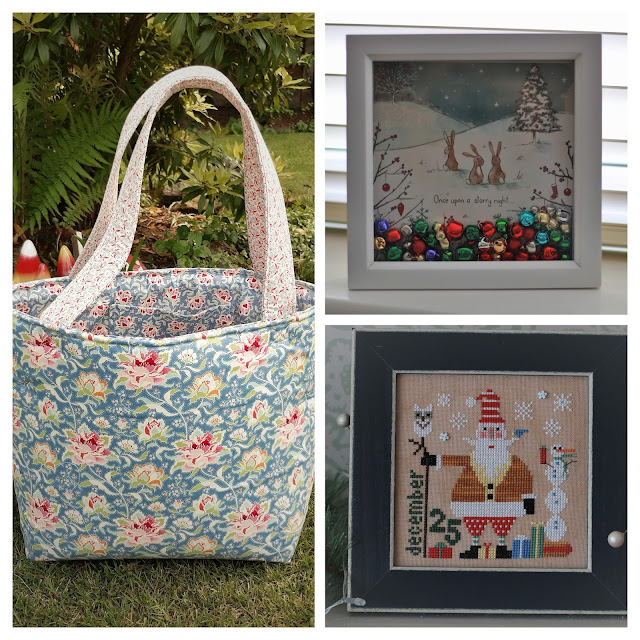 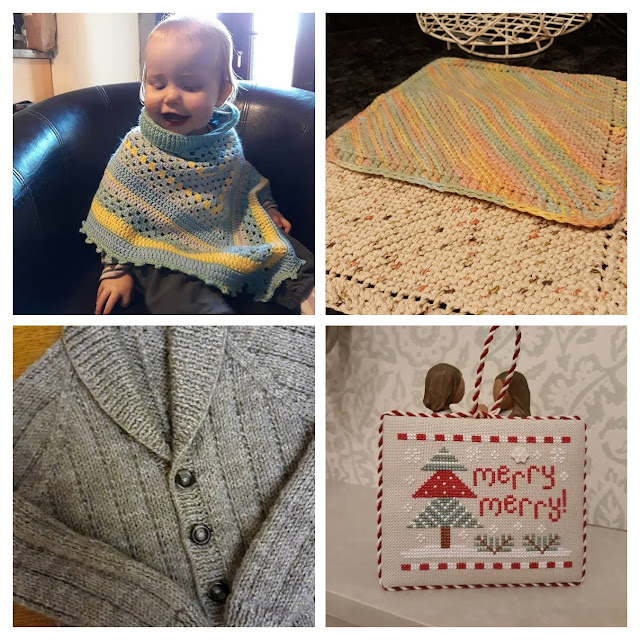 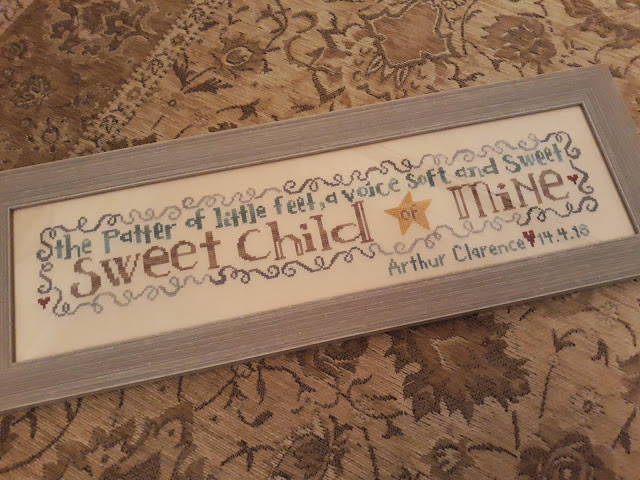 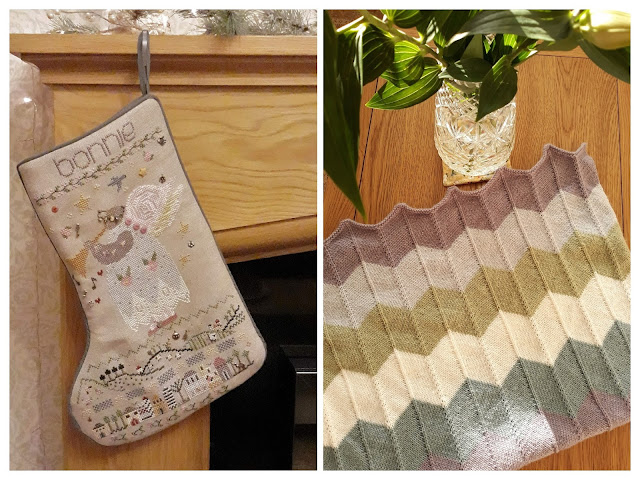 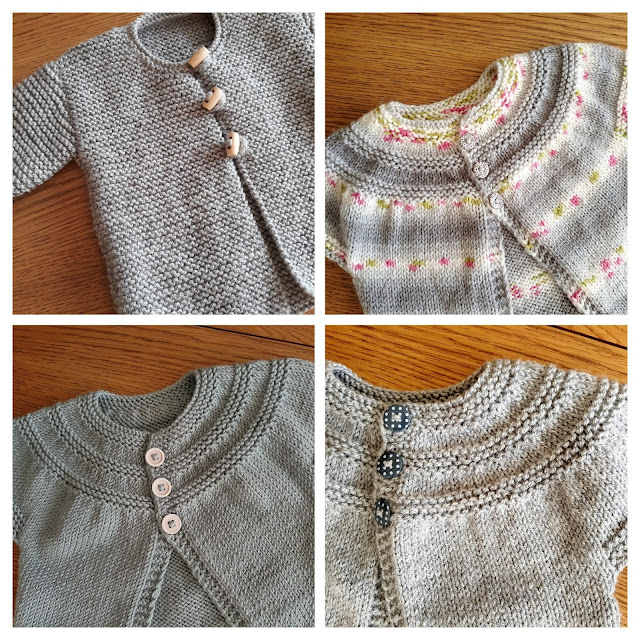 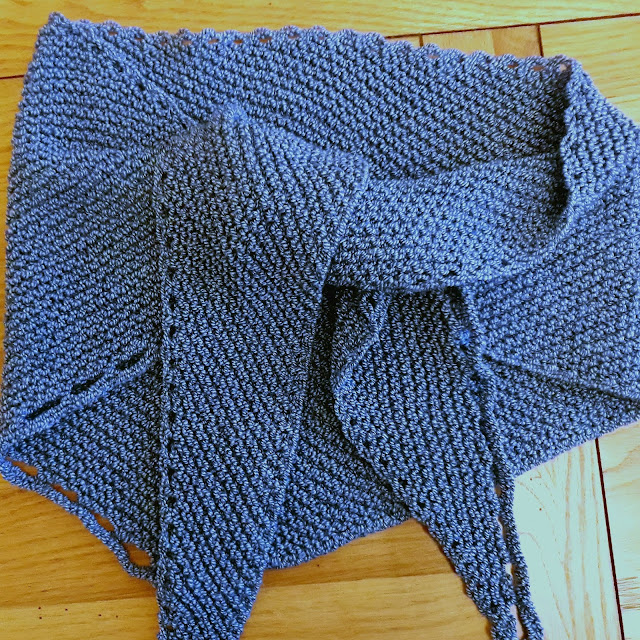 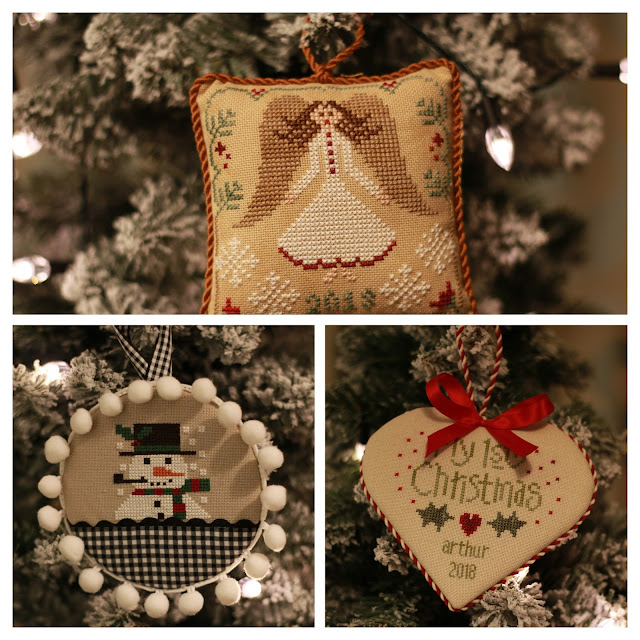 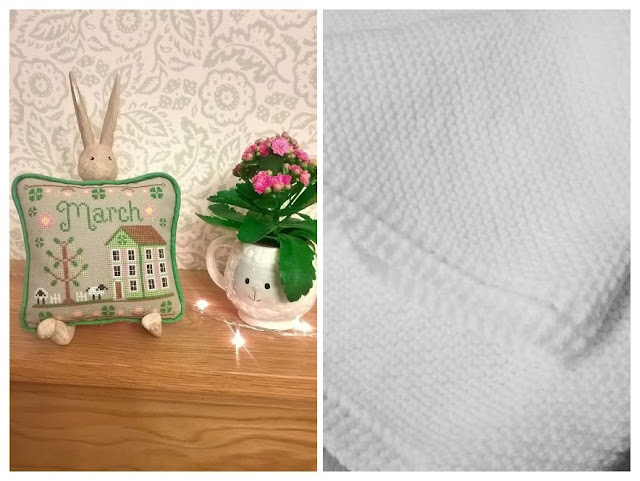 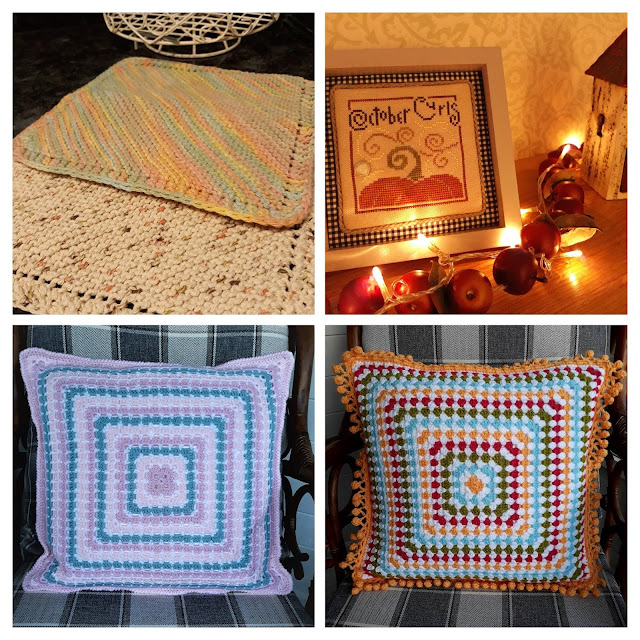 There are a couple of project bags I made in this last month and I also knit a couple more dishcloths but no photos.

I failed to read my pledged 50 books on Goodreads this year, I managed 39, still not bad.  My reading really slowed down the latter half of the year, I started some books and just couldn't get into them and time is too short to waste time on books that don't hold your interest.  I will set me challenge again tomorrow and go though my bookshelf and choose one to start off 2019.

I haven't got a lot to do today, I tided the garden up yesterday when it was dry and Mark cleaned the windows.  I'm pretty much up to date on all my jobs seeing as I'm been off work for almost two weeks.  I've been binge watching Luther (again) because the new series starts Tomorrow, (at last something worth sitting down to watch!)  This afternoon I will plonk myself on the sofa and start watching series three :-)

We are going to have buffet tea tonight with a glass of something alcoholic.  I will be stitching on something I started over Christmas which I will show next time.

Happy New Year to you all, thank you for following and commenting on my posts, I know blogging has fallen out of favour with lots of people, it seems that Instagram is the place to be now, and although I do like Instagram (and post there quite a lot), I still prefer reading a blog post, I feel like I get to know the person more through a blog, and there are some lovely bloggers out there:-)

I finally managed to get the kids ornaments finished off 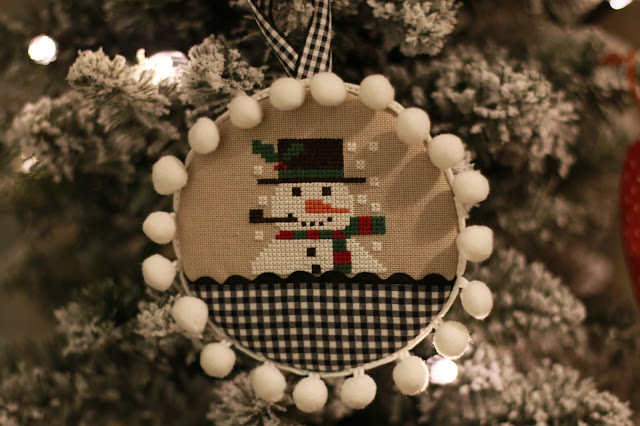 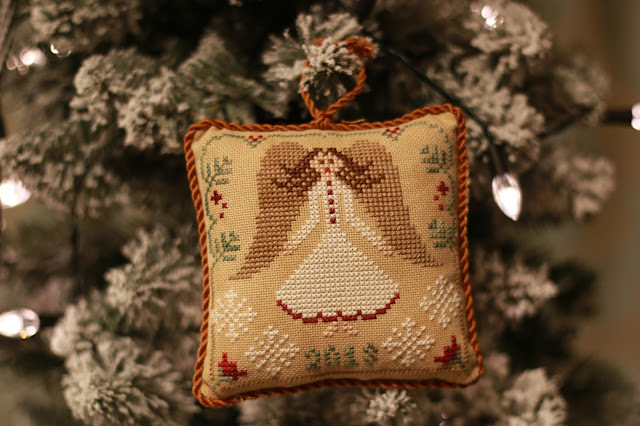 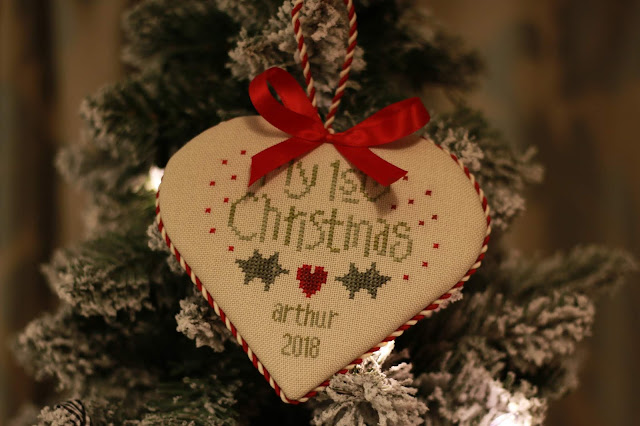 I also finished this Heart In Hand 2018 Santa 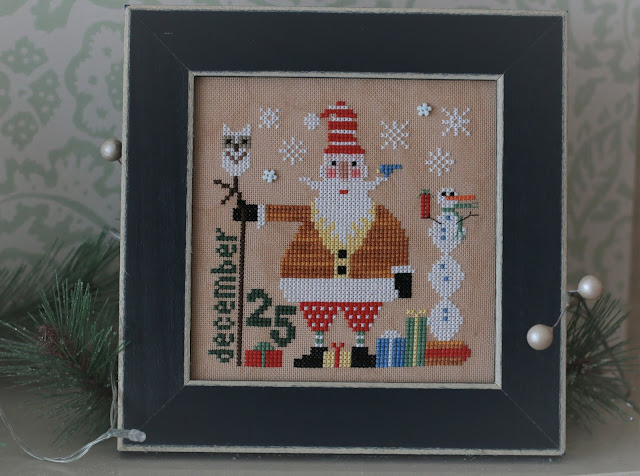 This was going to be for Oliver but it turned out too big to hang on his tree so he chose the snowman one instead.  I have to confess that i'm happy to have this Santa staying with me because I absolutely love him!!  I already had the frame and he fit it perfectly, so I laced him onto some foam board and luckily the back still fit on the frame too.

Below is a five minute craft from last week 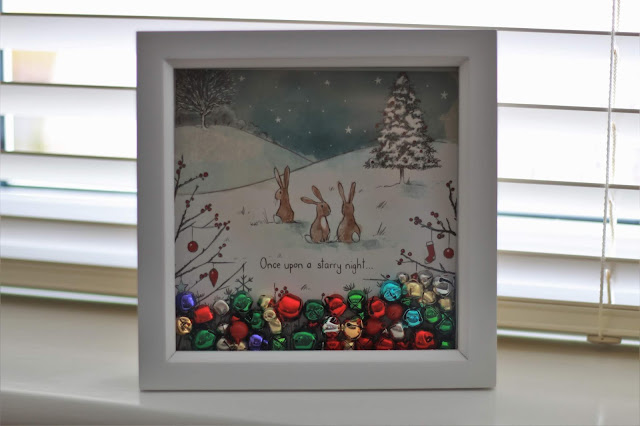 The picture is from the box my Christmas cards came in and I already had the box frame and coloured bells.  I just thought the picture was too lovely to throw away and It makes a nice decoration.

I've managed to get quite a bit done this week not being a work, including almost all of the present wrapping.  I've run out of paper for Olivers so will have to get some more tomorrow and get those done.  I have a hair appointment tomorrow afternoon then a good tidy up of my little crafty space is on the to do list. 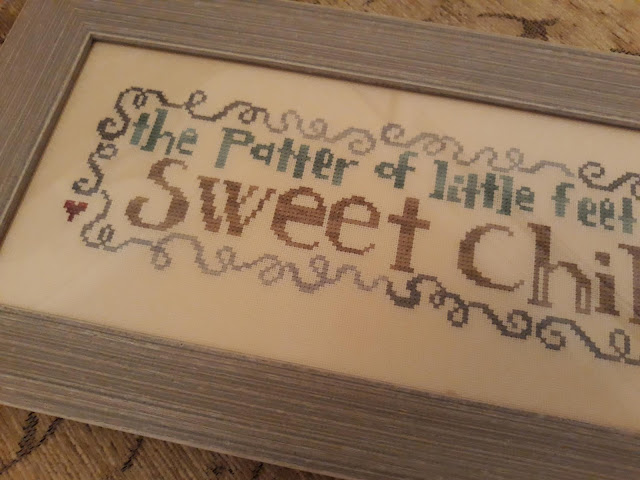 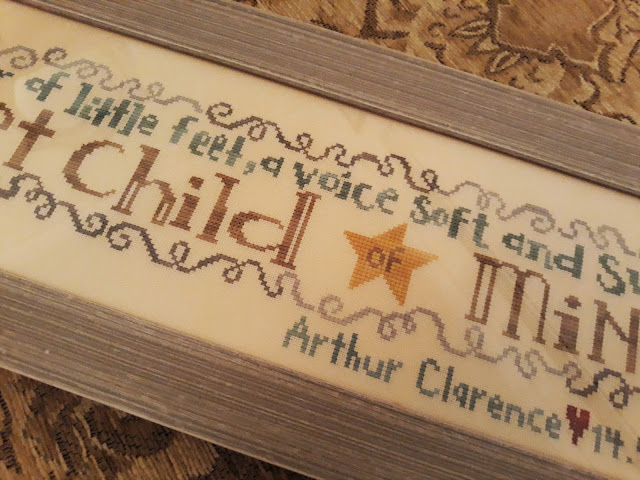 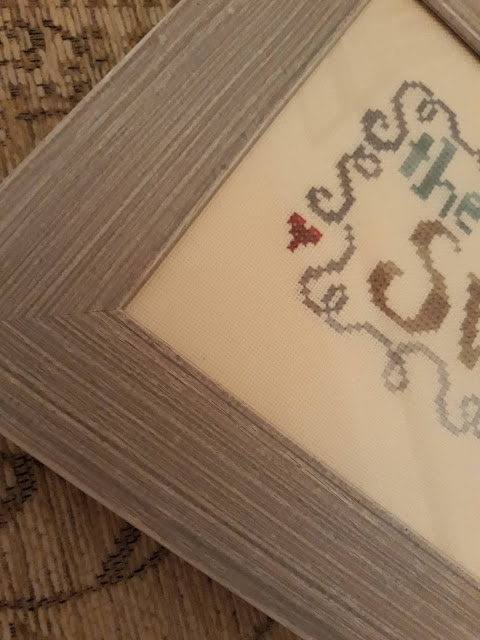 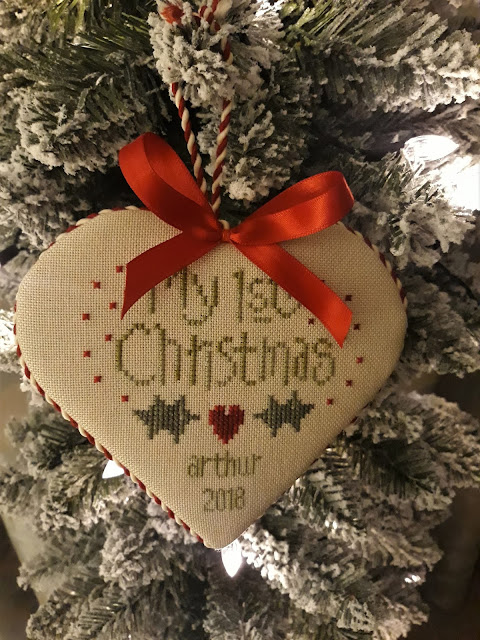 And little Arty himself :-)  He will be 8 months old tomorrow! 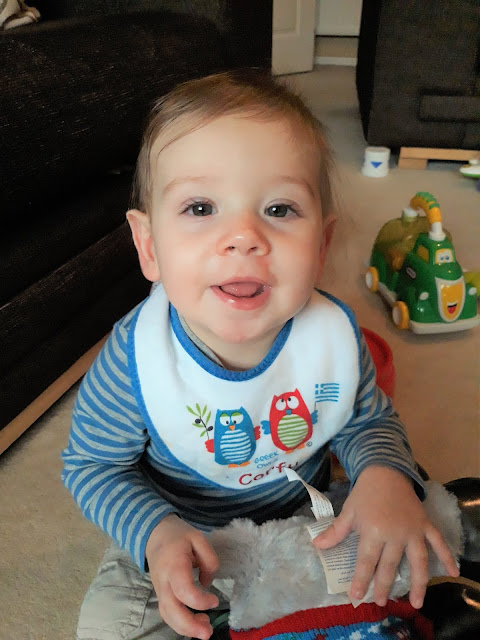 I finished Arthur's sampler a few weeks ago and collected it from the framers on Monday, I'm pleased with how it came out, framing is not cheap but a good framing job makes all the difference to something special.
I've stitched this same Bent Creek chart for all three grandchildren now, I love that it's not too babyish and will not look out of place in their rooms as they grow up.

Jenny hasn't gone back to work yet so I don't get to spend much time with Arthur on his own yet but on Saturday they took Oliver to the cinema and out for tea so I got to spend all afternoon with him, he was no trouble at all,  he is such a lovely pleasant little boy, and he loves to be snuggled :-)

I finish work tomorrow, so I have a lovely extended Christmas break to look forward to, and I need it!
It's our Christmas 'do' next Friday but i'm giving it a miss again this year.   Years ago we used to have a proper sit down meal, which was nice and fairly civilised, but for the last few years it's been a buffet at one of the local pubs, not really my thing at all to be honest.

Tomorrow is Christmas Jumper day and I was tasked with organising it, not that it needs much organising, more a case of putting up posters and sending emails round letting everyone know.

The MD is giving a £25 gift voucher to the silliest creation, but the response hasn't been good I have to say, so we will see tomorrow.  I will be shaking my collection tin at them again in the morning, the money collected will go to Save the Children so it's all in a good cause.

Hopefully I will have a little more time next week so I'll try and catch up with you all again then.

I finished stitching Bonnie's Christmas stocking a good few weeks ago now, and finished it completely the weekend before last. 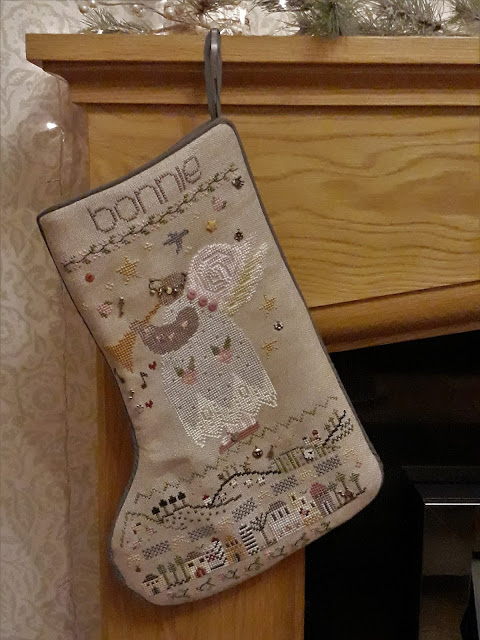 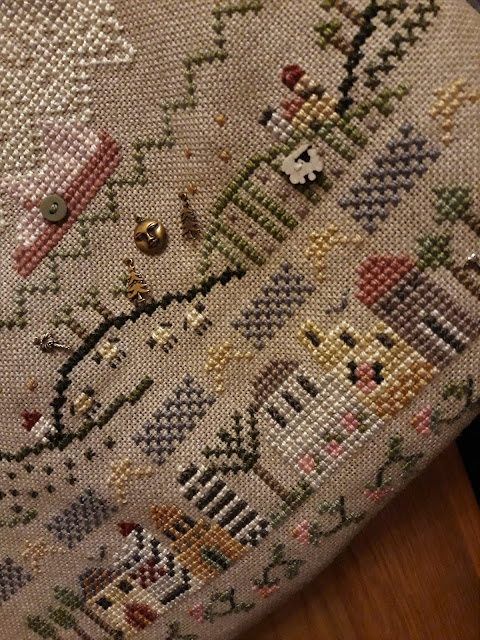 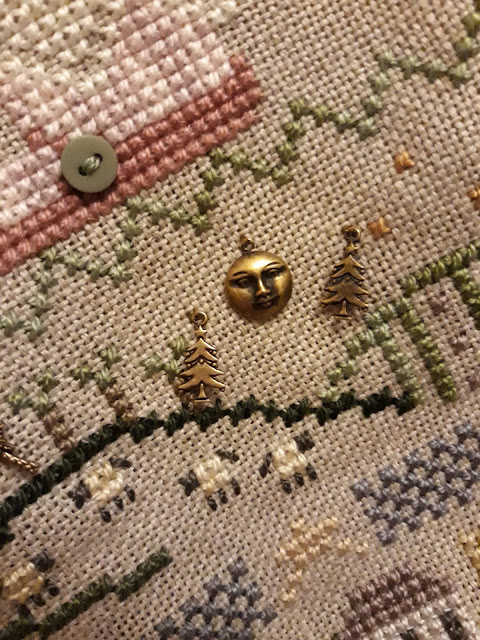 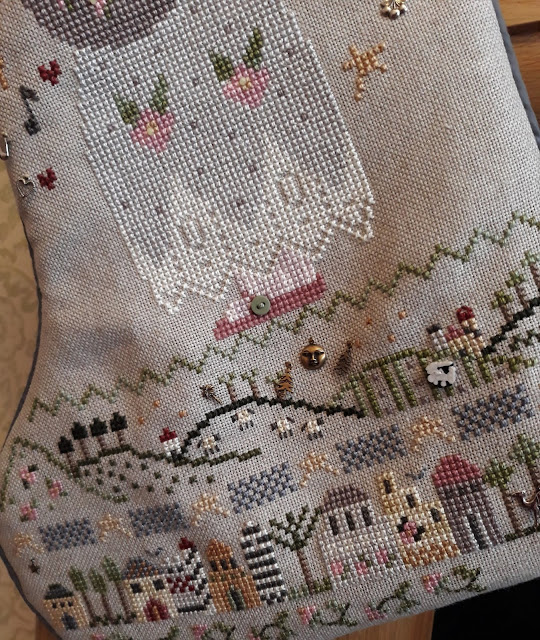 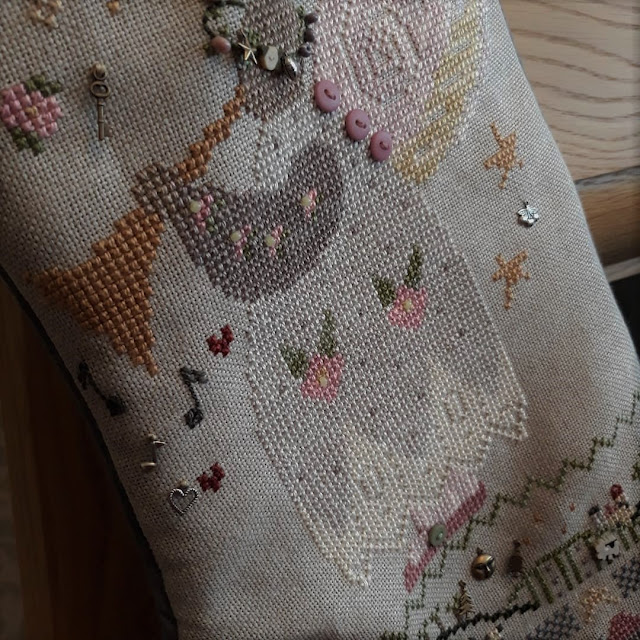 Joanne is pleased with how it came out, and it's another heirloom treasure for one of my grandchildren.

I  got my stitched ornament tree up at the weekend too 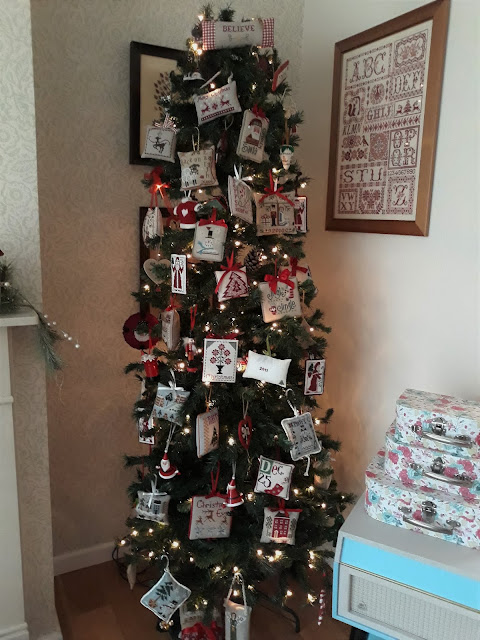 I'm afraid that this skinny tree has seen better days, for the last two years I've been saying we should get another.  I would like a taller, fatter one, I just have to persuade Mark that we should get one :-)

We have also had a bow put on the front door this year, I'm pleased with how festive this looks 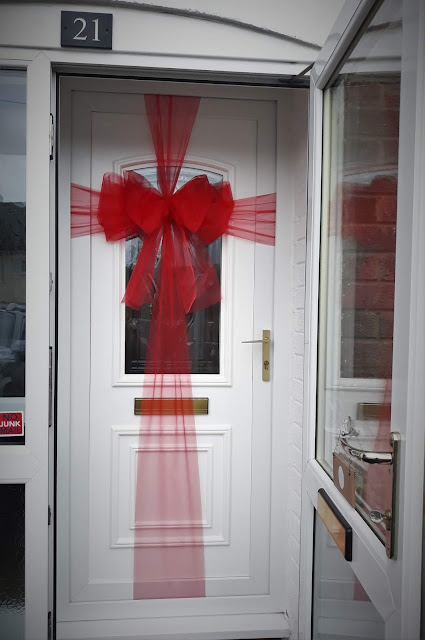 It's that time of year when we could all do with more hours in the day and more days in the week to get things done isn't it?  I have got a lots of things ticked off my list, a lot of my present shopping is done and I want to start wrapping this week otherwise that turns into a mammoth chore, I've been buying extra bits of food in with the normal weekly shopping, and anyway I don't do a big food shop like I used to do, it only goes to waste and we are all going out for Christmas lunch, so no veggies or meat to buy this year.

Thank you to everyone who sent get well wishes to  Bonnie after my last post.  Her cold and eyes had got better and then on Friday she had signs of conjunctivitis again and yet another cold!
The doctor told Joanne to keep her dosed up on calpol to keep her temperature down and some cream again for her eyes, but on Saturday tea time her temperature shot up again and as Joanne was on the phone to me she had another convulsion.

Joanne said Gavin kept really calm and did exactly what they had been told to do by the hospital, while she called the ambulance, they arrived really quickly and said they would take them to hospital just to get her checked out but they were sure it was temperature related again.

Thankfully her temperature came down to normal after a couple of hours of being monitored in A&E and they were sent home.

I never experienced this with any of mine, the doctors will tell you it's quite common and they do grow out of it by the time they are five, even so, it really is so scary when it happens.

Fingers crossed she can avoid catching colds for a while, Joanne is a nervous wreck!