I don't usually take any crafting to do when we go on holiday, but this time I did pack some knitting, and I'm so glad I did because this holiday was all about taking it easy and my knitting gave me something else to do when I wanted a break from reading.

I had already completed one of  the In Threes cardigans for Bonnie and I loved knitting it so much that found some more yarn from my stash to take with me and made another two.

The pattern calls for worsted weight yarn but I followed other recommendations on Ravelry and used DK yarn and knitted a bigger size.

This is Stylecraft Bambino yarn in duck egg, it's much nicer than the washed out colour it's coming up on here 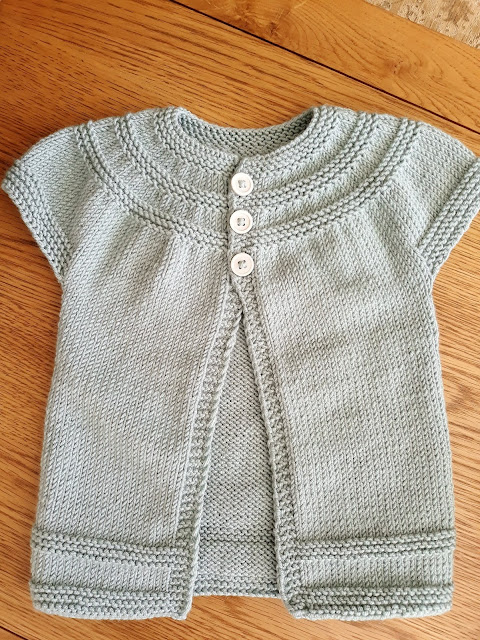 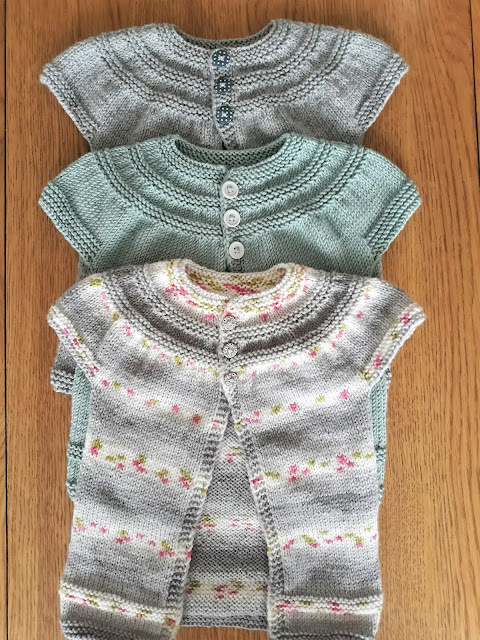 This one is knitted in a King Cole Yarn 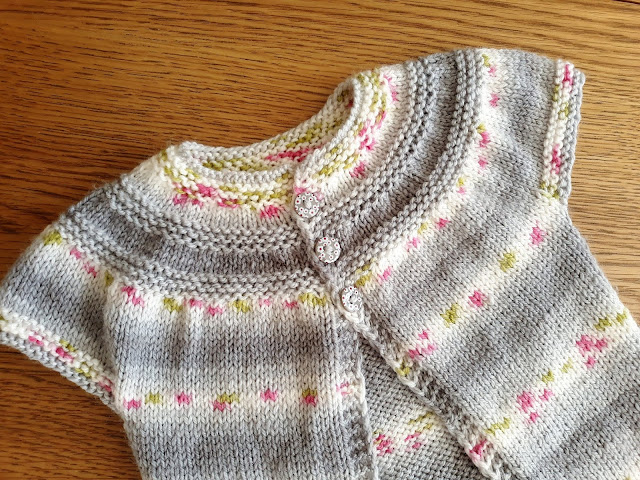 And the third one, which is in a larger size is knitted in a lovely grey Woman's Institute yarn.
I put the button holes on the garter stitch section on this one and I think it looks much better that way. 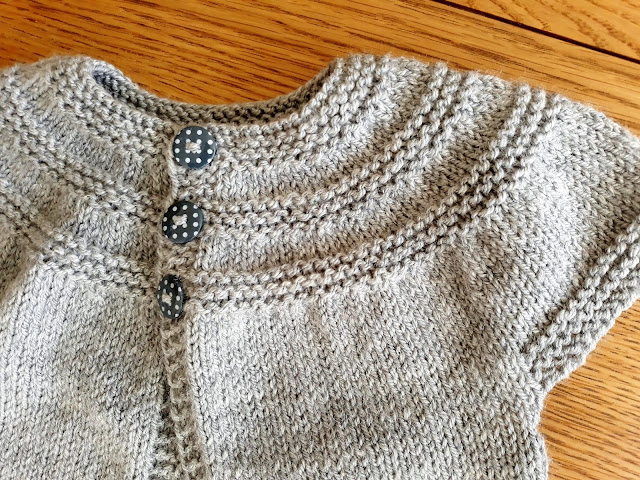 The cardigan is knit top down so no seaming to be done.
Where the side seaming would be there is a little garter stitch detail, which I think looks quite nice. 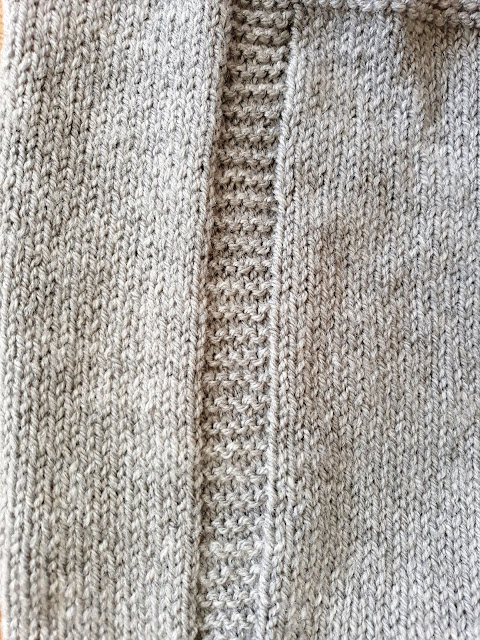 I'm so happy with how these came out and that I was able to knit them from yarn I already had, bonus!
I can see me knitting more of these for Bonnie over the next few years, it such a great pattern!

You can find the In Threes Pattern on Ravelry, it's not a free pattern, but it's good value for money because you get many different sizes.

The kids are alright

Thank you for all your comments on my last post, thankfully little Arthur is doing just fine now, he has finished his course of antibiotics and was discharged from hospital last Saturday.  It was confirmed as a Strep bacteria which could have been picked up anywhere as apparently it is airborne.
He was also due his first lot of vaccinations last week but they have been postponed for a couple of weeks as they don't like doing them when the child has not been well.

Our week away was very relaxing, we only ventured out sight seeing one day when we caught the bus to Ragusa, the rest of the time we spent by the pool reading then a walk to the Marina in the evening for something to eat.  It was just what we both needed.

It's not very often that me and Mark read the same books but we read two the same last week,
The '86 Fix and Beyond  Broadhall by Keith A Pearson.

I really enjoyed both these books, (you have to read The '86 Fix first otherwise the second book will make no sense at all) 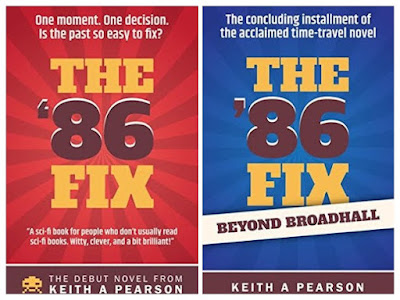 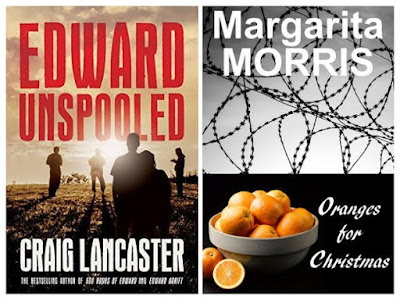 I've been in a bit of a reading slump lately but I really enjoyed all my holiday reading.
(If you are interested in any of the titles they are all available on Amazon.)

I will leave you with some photos from our holiday to Sicily.

The beach at Marina di Ragusa 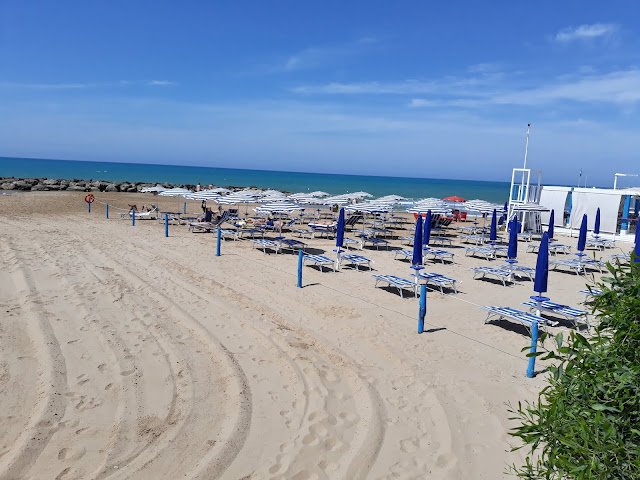 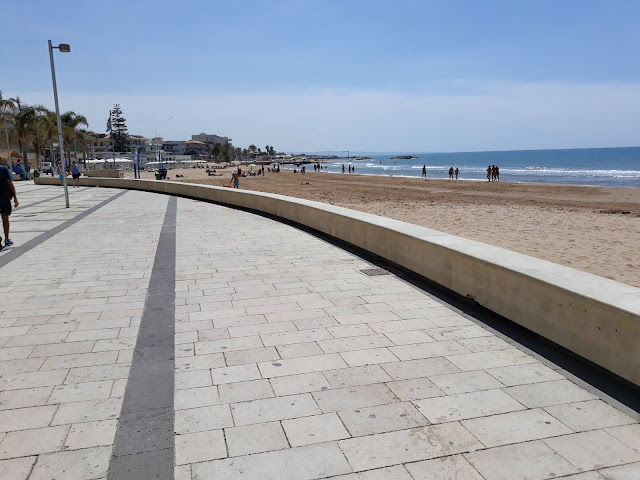 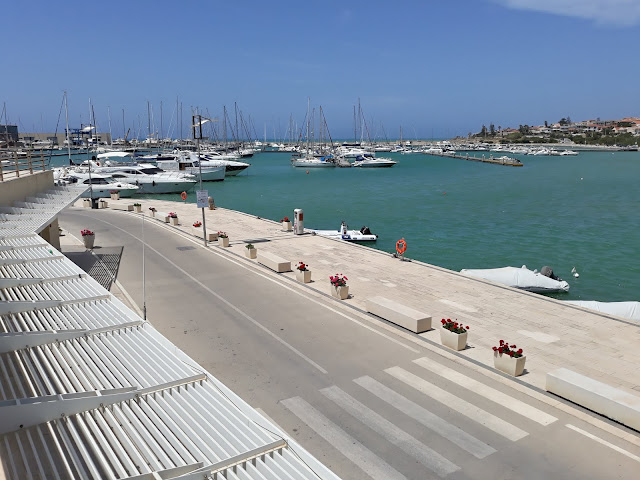 Day out to Ragusa Ibla 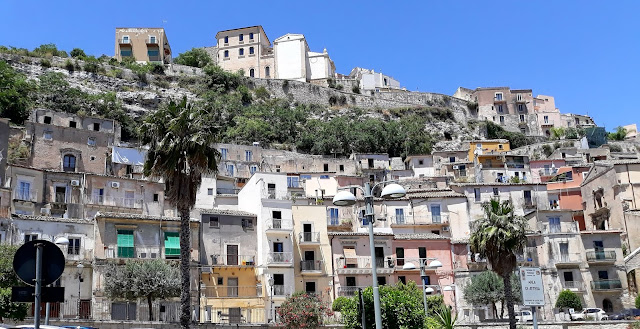 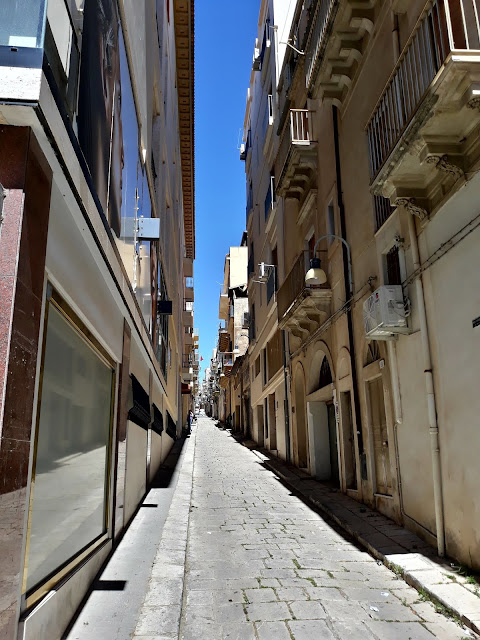 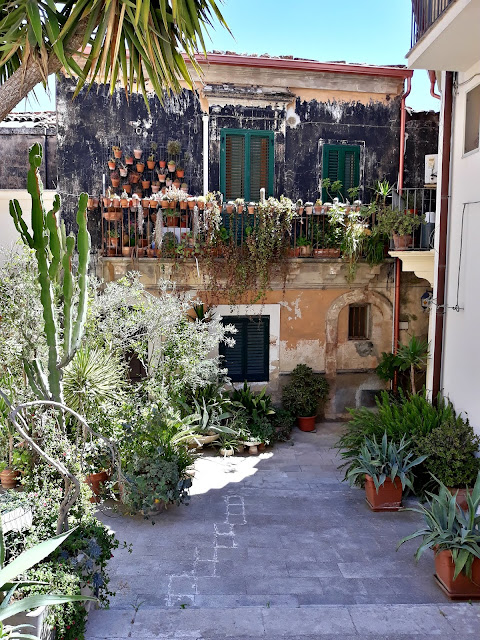 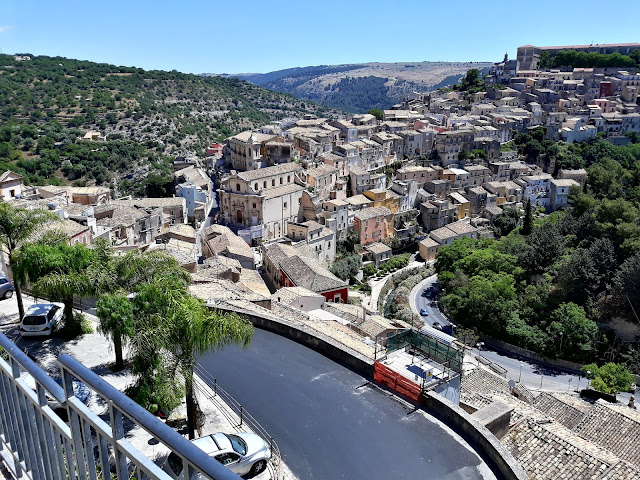 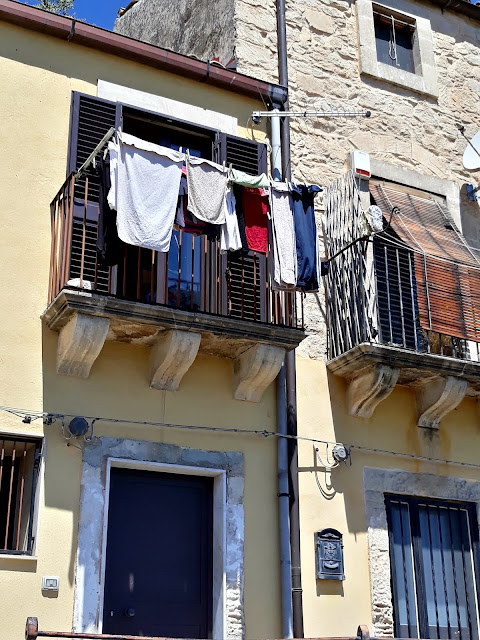 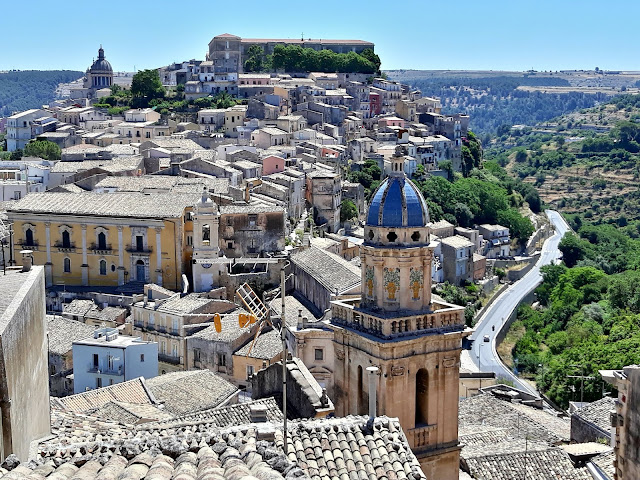 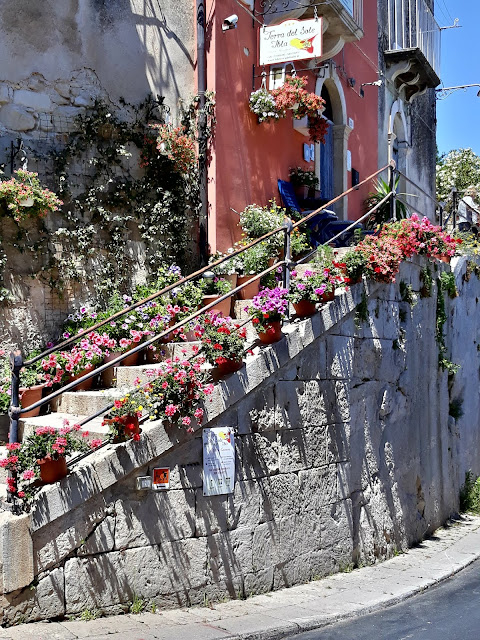 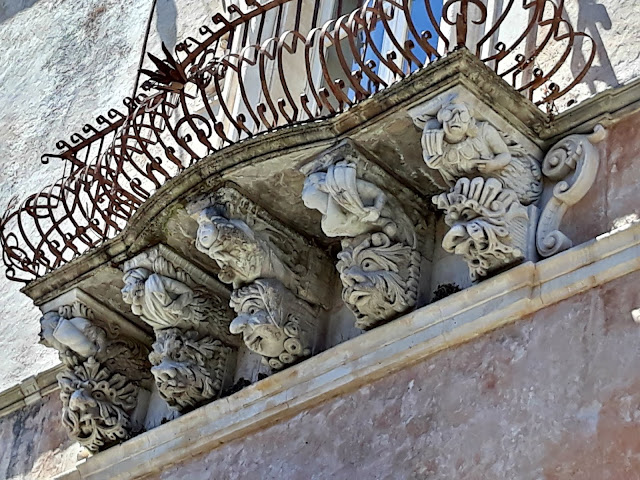 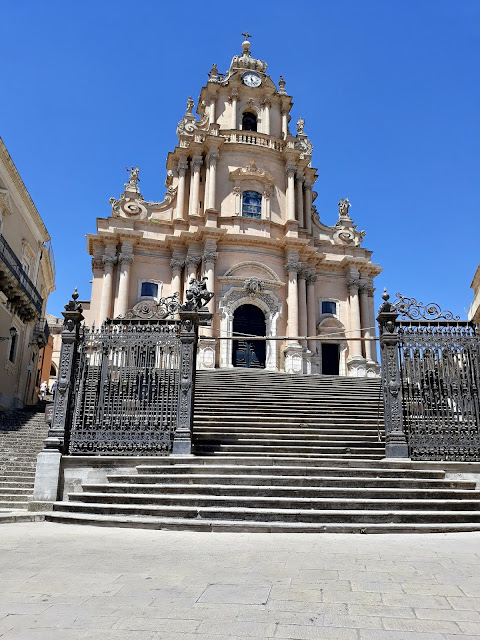 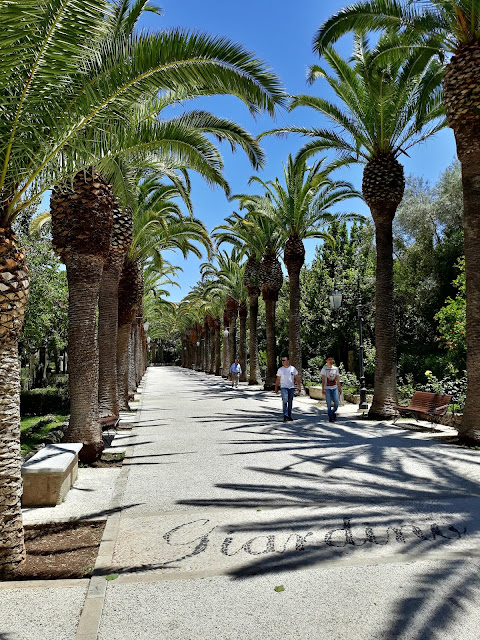 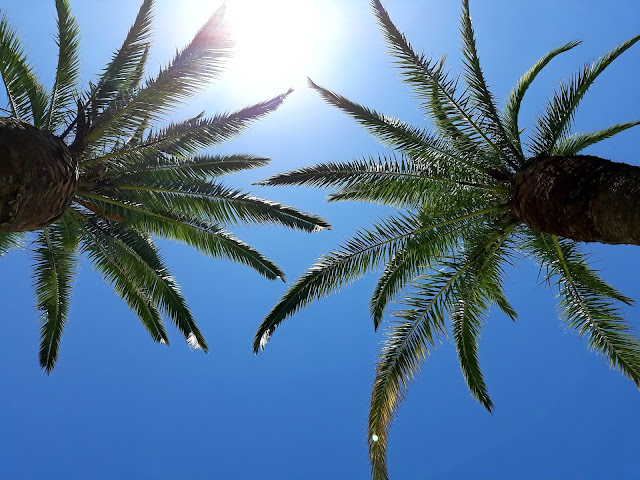 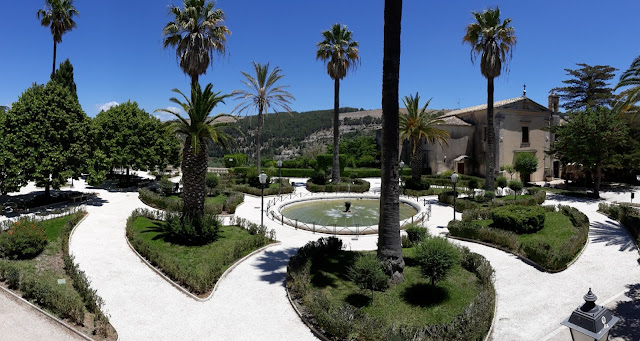 Most of the time we had the pool to ourselves, the beach was very nearby so I can only assume that's where people chose to spend their time, which was ok by us :-) 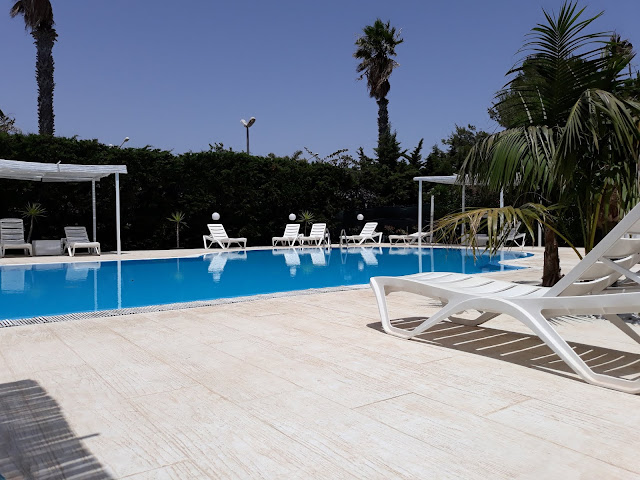 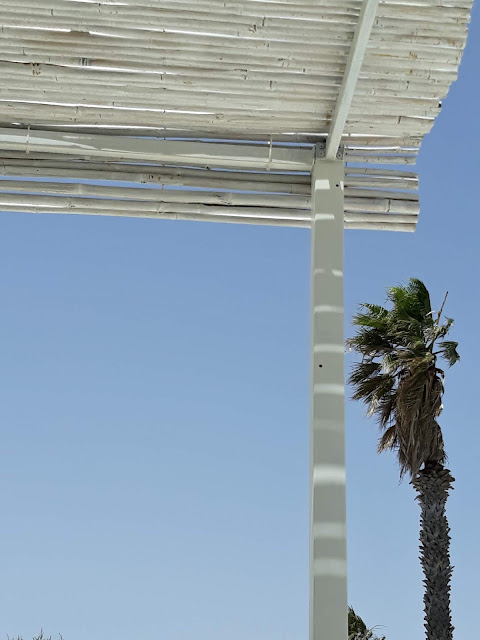 I did a fair bit of knitting while we were away, I will share that next time.

It's been quite a stressful and worrying week.

Little Arthur has been in hospital for 7 days, Oliver has had chicken pox and we didn't think Arthur would catch it, but he did and he developed a high temperature.  When Jenny first took him to A&E in the early hours of last Tuesday morning she was sent home after being told it was probably due to the chicken pox, but she took him back again a few hours later because he didn't seem to be any better.

And thank goodness she did.  I won't go into everything that happened but he was started on antibiotics and anti viral's right away.   It turns out that he had a Strep bacteria, his infection levels were really high at one point, (in the 70's), but now they are down to 5.

We are just so thankful that Jenny did the right thing in taking him back to hospital when she did, I shudder to think what might have happened if she hadn't.

He came home yesterday but will be kept on antibiotics for the next five days, Jenny will need to take him to hospital every day for him to be given the antibiotics because they are given intravenously.  She said he is much better, I haven't been to visit him because I have a cold and don't want to pass anything on, so I will have to wait a bit longer to give him a big cuddle. 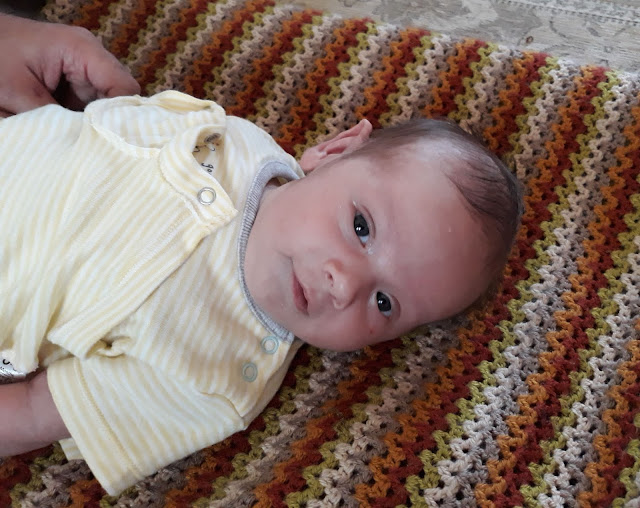 As I said, Oliver has had chicken pox, he's been ok apart from a couple of off days and he did have a lot of spots, but he is better and back at school today.
Just before that Bonnie wasn't well for a week, at one point the doctor thought she might have measles but thankfully the rash only lasted for two or three days and her blood test came back negative for measles.  In the end they put it down to a viral infection, she is back to her normal happy self now, although this photo made me laugh, she looks rather puzzled at Nanna taking her photo 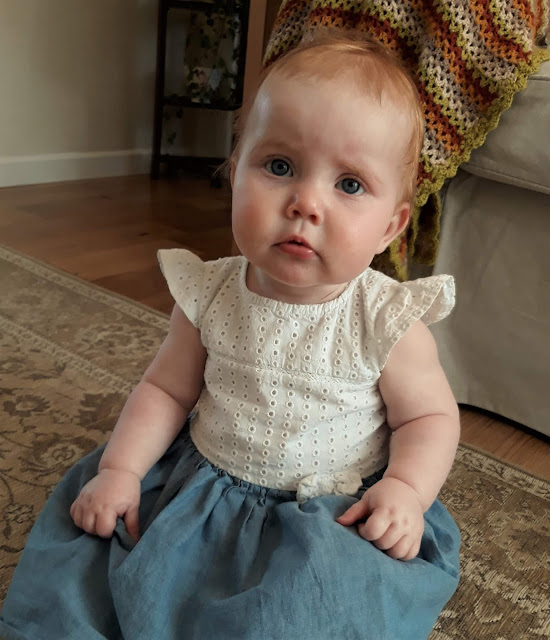 As you can imagine I haven't been in the mood for much crafting, I haven't done any stitching on Bonnie's Christmas stocking for about two weeks.
I did cast on a little cardigan but have yet to finish it. 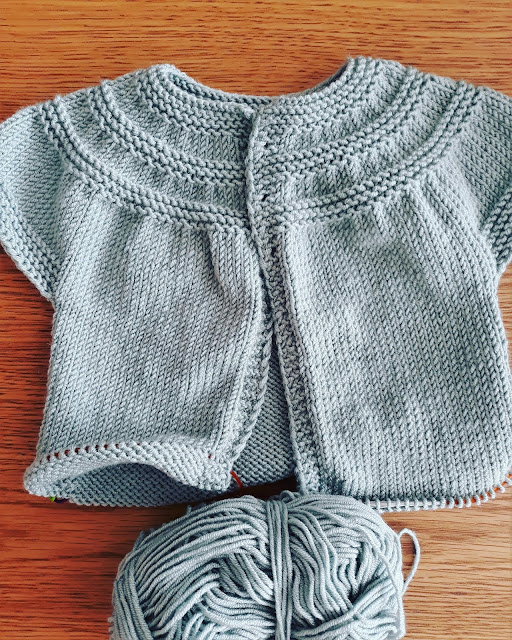 We are going away tomorrow, to Sicily, just for a week, usually I don't take any crafting on holiday with me but this time I might pack some knitting along with my books.

I feel guilty for going away but I have asked Jenny if she wanted me to cancel and she said she is fine with me going, I know that Arthur is on the mend now but I just feel guilty not being here to help her with all the trips to hospital and looking after Oliver, I've had Oliver every day while Jenny and James have been at hospital, Joanne will help out with collecting him from school if needed while i'm away because James will have to go back to base in the next couple of days.

I haven't done my usual round of blog visiting this week, If I get chance while we are away I will try and catch up.