No ladies, I'm not referring to my posterior, although some might be inclined to say otherwise :O The behind i am am referring to is the blogging & blog reading, where on earth does the time go?? I've been full of good intentions but something always gets in the way. Last week i tried my hand at scrap booking, a completely new thing for me but my friend who is into scrap booking in a BIG way asked me to go to her crop as they were having a 'taster' session, all i was to bring along was a 6x4 photo and £1 for materials. I thoroughly enjoyed the night and my friend gifted me with a scrapbook to put my first page in:-) 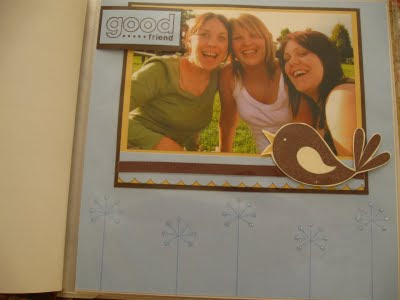 We got the chance to try our hand at stamping, (the bird & the flower thingies) and the little frilled edge under the photo was done with a cool little tool that did the frilly bit for you!. I dread to think how much could be spent on this hobby and I'm a little reluctant to go down that road, but it did make a really pleasant change. Stitching has been a bit hit and miss, most nights i really haven't felt like getting anything out. This is my pathetic progress on my ABC

I think perhaps i am getting a bit fed-up with the same old, same old, so to try and get back a little enthusiasm i made a new start yesterday - on this

I've had this ready to do for a while now and it seems to be stitching up quickly (famous last words, lol) no photos today though, I'll show next time.
My photo class is going well, really enjoying it so far, i was a bit worried i was going to be stuck with a load of men, but only 2 men in the class the rest are a mixed age range of women, all it seems with more or less the same objective, to become a brilliant photographer and earn loads of money, lol. I will try and get around to posting my photos somewhere so you can all have a good laugh for next time, but i took this today in my garden, trying to bring together what we have covered up to now

Thanks for stopping by & have a great week whatever you may be up too x
See you soon...... Maggie 12 comments:

Wanna Join Me in a Happy Dance?

Because today i picked up my AT from the framers! I really love the way it's turned out and so glad i went for the red frame 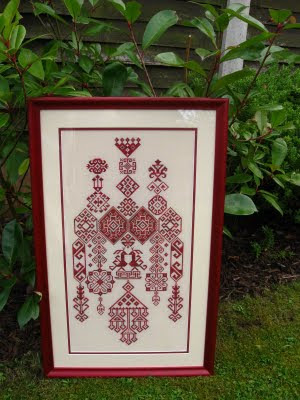 Alla Turca Available from Stitchers Heaven Yahoo group
Designed by Pelin Tezer
stitched on 28 count with threadworx 1089 (Bleeding Hearts)
~~~~~~~~~~~~~~~~~~~~~~~~~~~
Next up is something i haven't shown in a while, my ABC. Since i came back from holiday i haven't spent quite as much time stitching, but the times i have stitched has been on this. 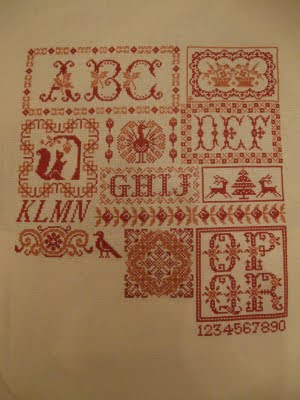 I'm quite close to finishing, but way, way behind most that started this SAL, i keep thinking that i will get it finished by the end of next month, but at the snail pace that I'm going lately that's probably a bit ambitious! 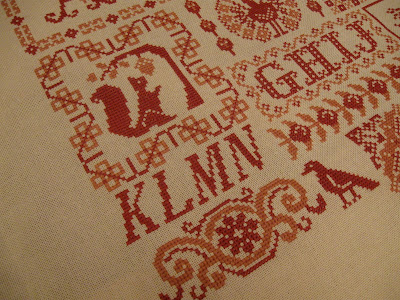 This is also on 28 count, with Anchor threads 1013 & 1014. Please excuse the slightly washed out photos! And, speaking of photos, I've enrolled on a photography course this week, I've been looking around for a course for a while and came upon this one happening at the Botanical Gardens near Birmingham. I'm quite excited about it! The course starts next Saturday afternoon, so it also gets me out of the grocery shopping, lol. I shall bore you all with how it went next time, lol. For now, i hope you all have a lovely weekend whatever you are up to :-)
See you soon...... Maggie 25 comments:

Catching up & I Have a Finish!

It's been a while, but there hasn't been much stitching going on here to show, except i finished AT up when i came back from holiday 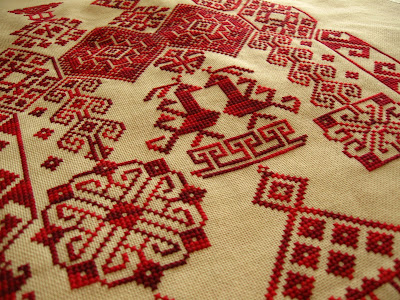 It's still waiting to be framed though. It has a small mark on the fabric at the bottom, not too noticeable but i know it's there therefore will always notice it! As the threads are not colourfast i cannot wash it, i have some carpet & upholstery wipes I'm going to try later and hope that works. and then i can take it to the framers in the week. 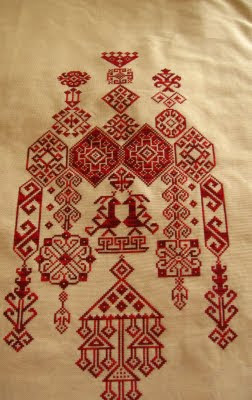 This past week I've spent my afternoons after work in the garden because the weather here has been absolutely beautiful every day, I've chopped & trimmed everything in sight, lol and it now looks so much better, most of the bushes we planted had somehow taken on a life of their own, it was like The Day of The Triffids in parts! 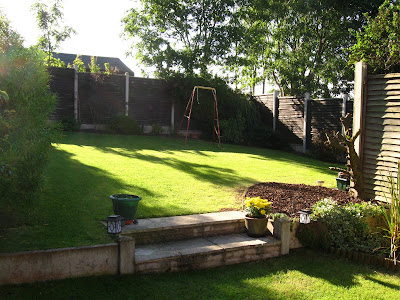 The right hand side on the corner there was a huge bush which although lovely when it was in flower had gotten just too big, all that's left now is the trunk of it and i have filled that area with daffodil bulbs and covered it in bark, so hopefully i shall have a lovely display next spring :-)
I've planted up my hanging baskets and window boxes with winter pansies too.

Now I've got the garden in order i shall hopefully be able to get some stitching in next week although i have to finish off my Power Point for the I.T NVQ I'm doing at work because the assessor is visiting the week after and i really want to get it out of the way (the assessor has been a bit of a nightmare from the beginning). Talking of work, we have had a series of shock redundancies. Back in April when we had the end of year review we were told that although things were tight (like most companies i suppose) they were going to save money through things like cutting back on spending, tighter reigns on expenses and there would be no spending on company fun days, but they were not going to make redundancies. Well that was then! so far, one of the girls has gone from Sales and one of the service engineers, then a week ago 8 of the design and CAD lads had letters and they made the decision this week to make two of them redundant, one of them was past retirement age anyway but the other one was a young lad, he and his wife have a young baby, it was him i felt most sorry for, he got upset when he was saying his good byes, i hate it when people get upset and could have cried with him!! We don't know if there will be any more, they never even announced these last ones! It's all made worse because all the lads are a really great bunch and everyone gets along, but i suppose with the economy being they way it is it can't be helped.

Thank you all for visiting and all your lovely comments, it makes my day to read them and visit all your lovely blogs :-) Have a lovely week whatever your getting up to. x